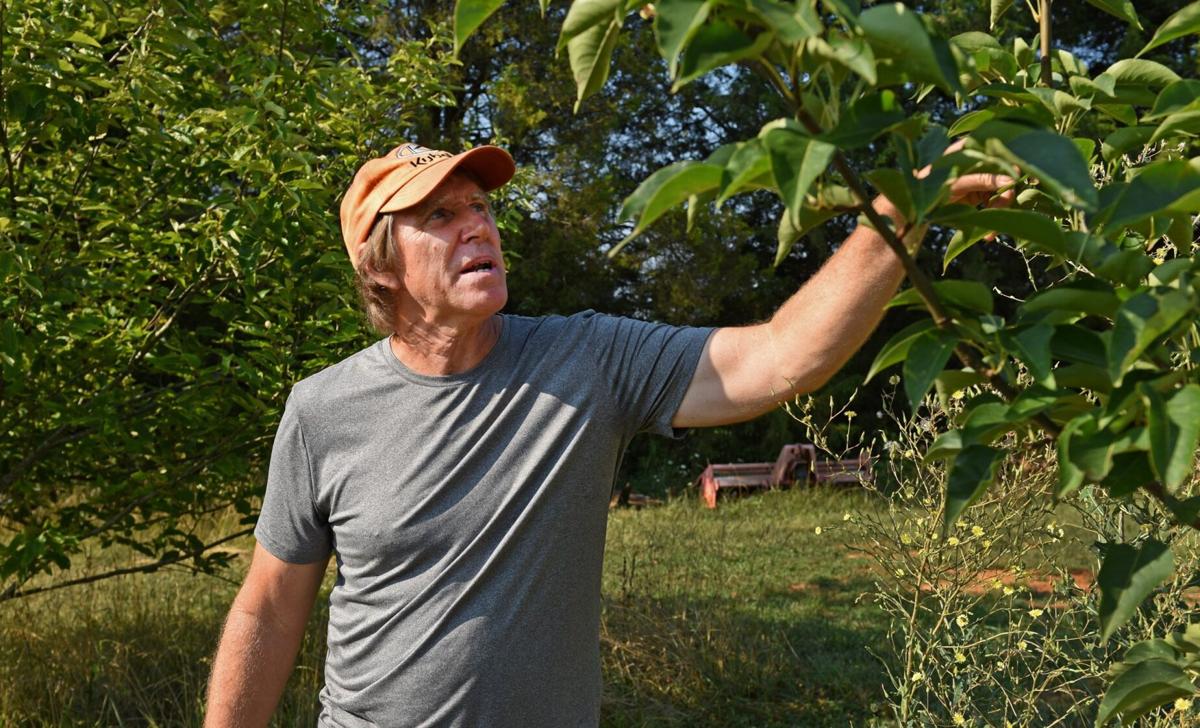 Kent Layher talks about the Asian pears he grows on his Y River Farm in the West Bend area of Forsyth County. 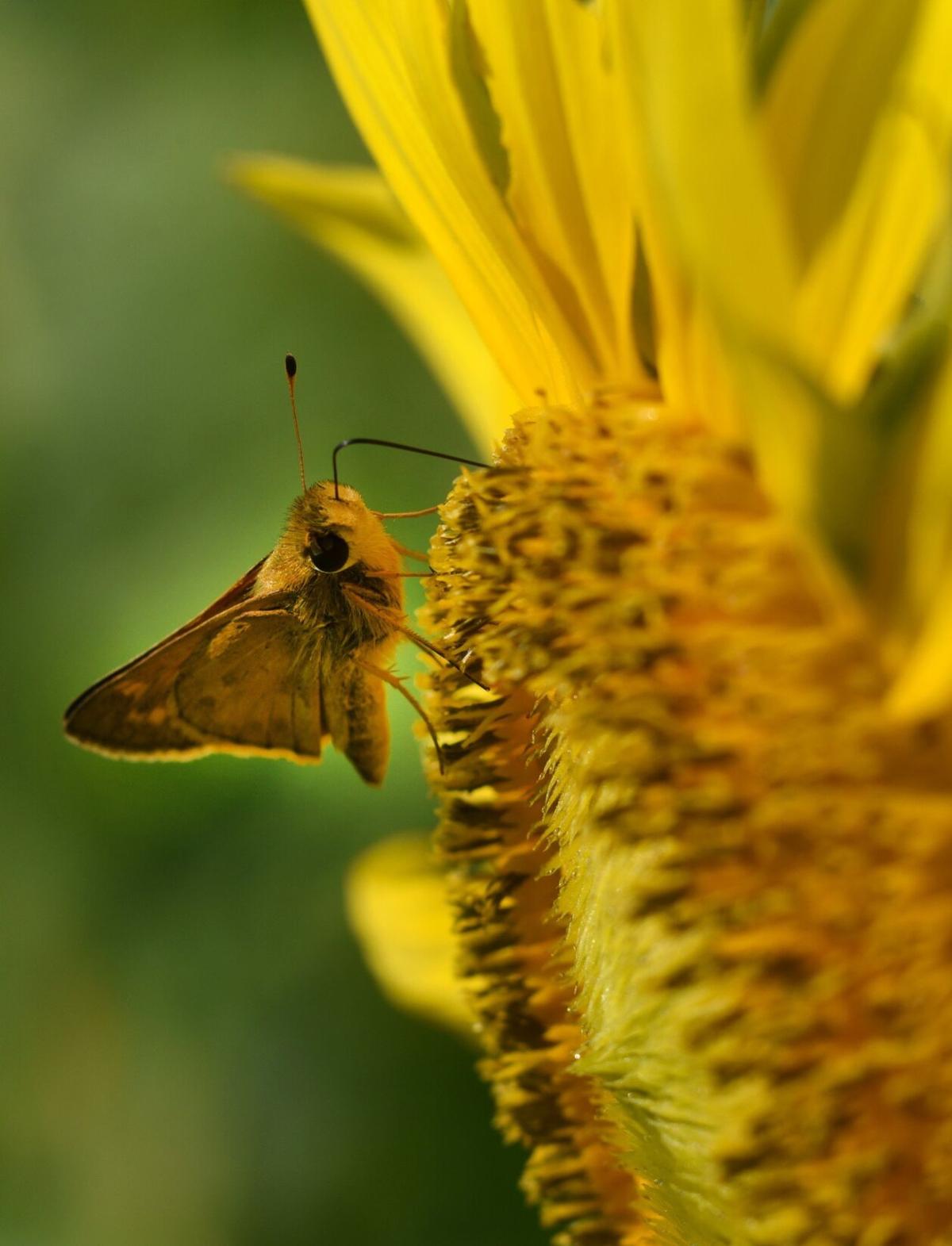 A skipper pollinates a sunflower at Layher’s Y River Farm. 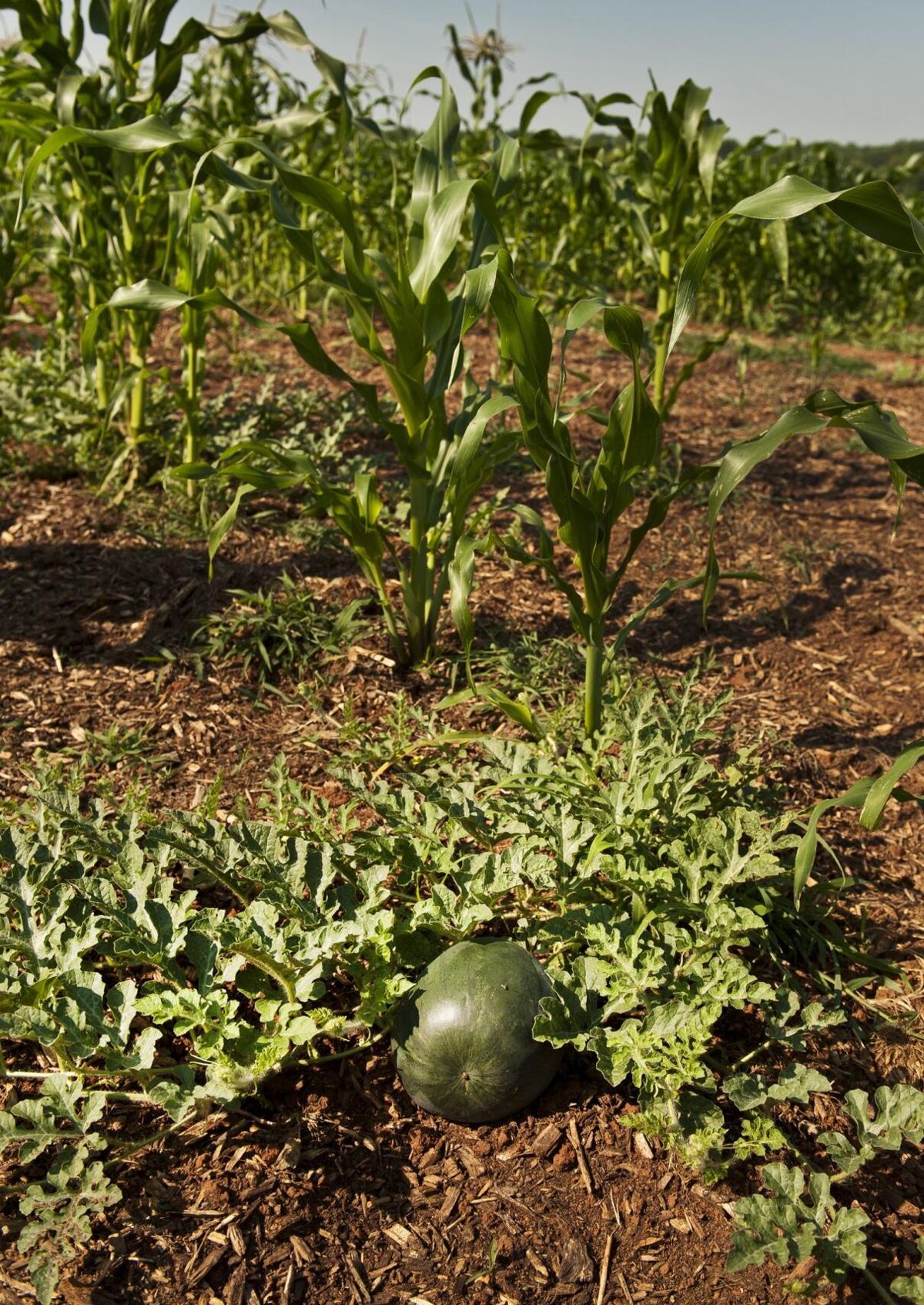 Layher grows watermelon among sweet corn on his Y River Farm in the West Bend area, a planting practice he learned from his grandfathers, who farmed in Missouri. 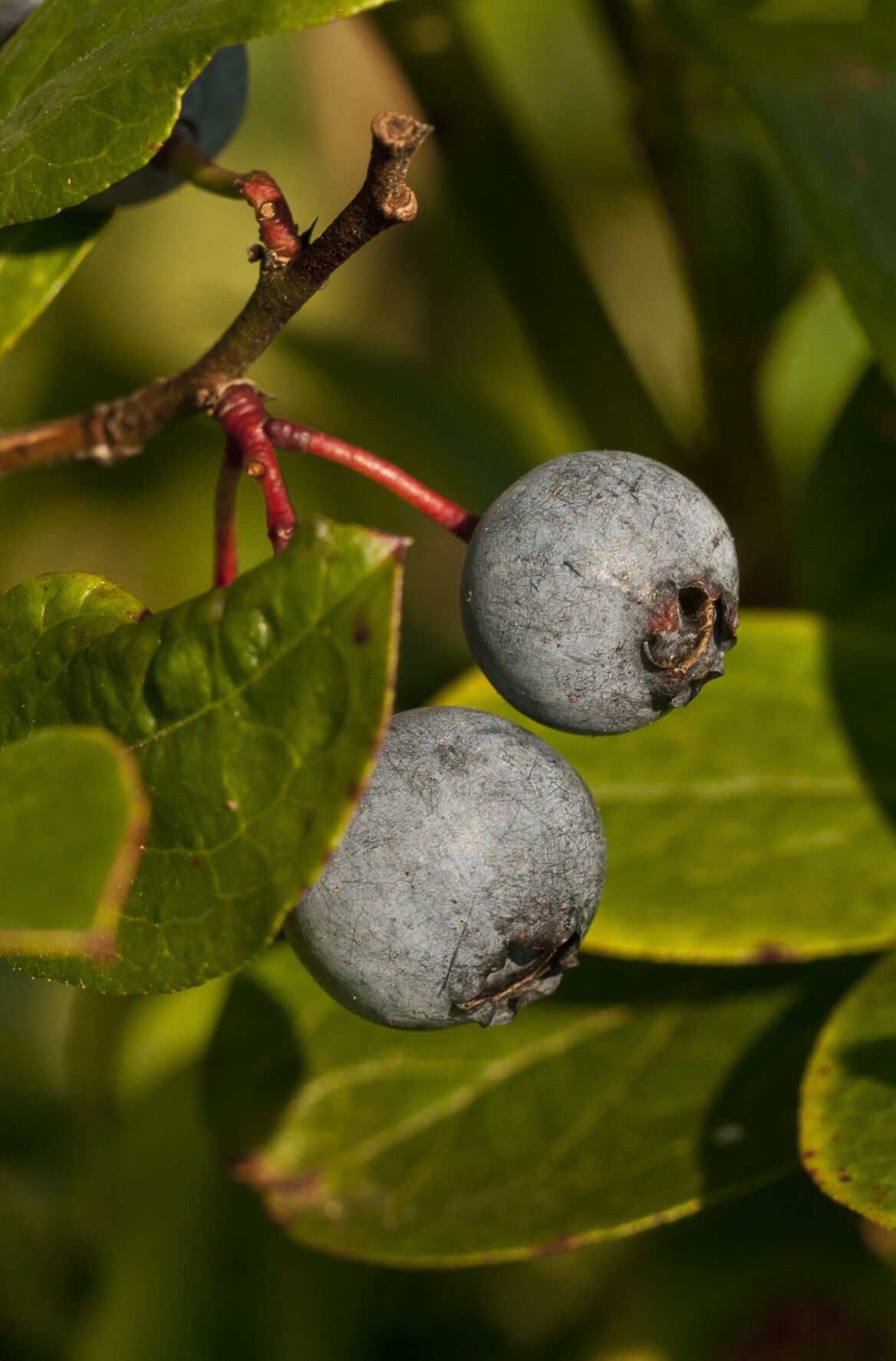 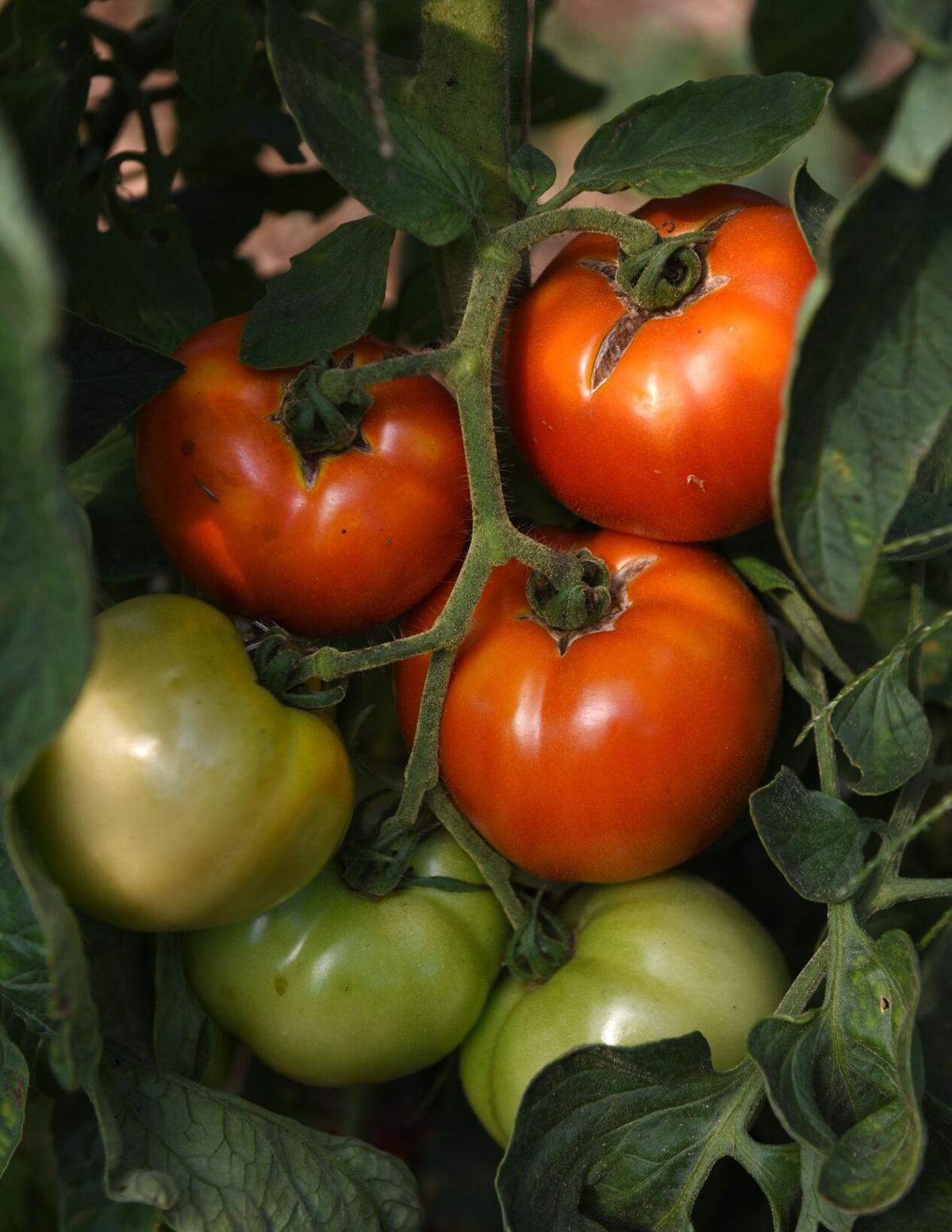 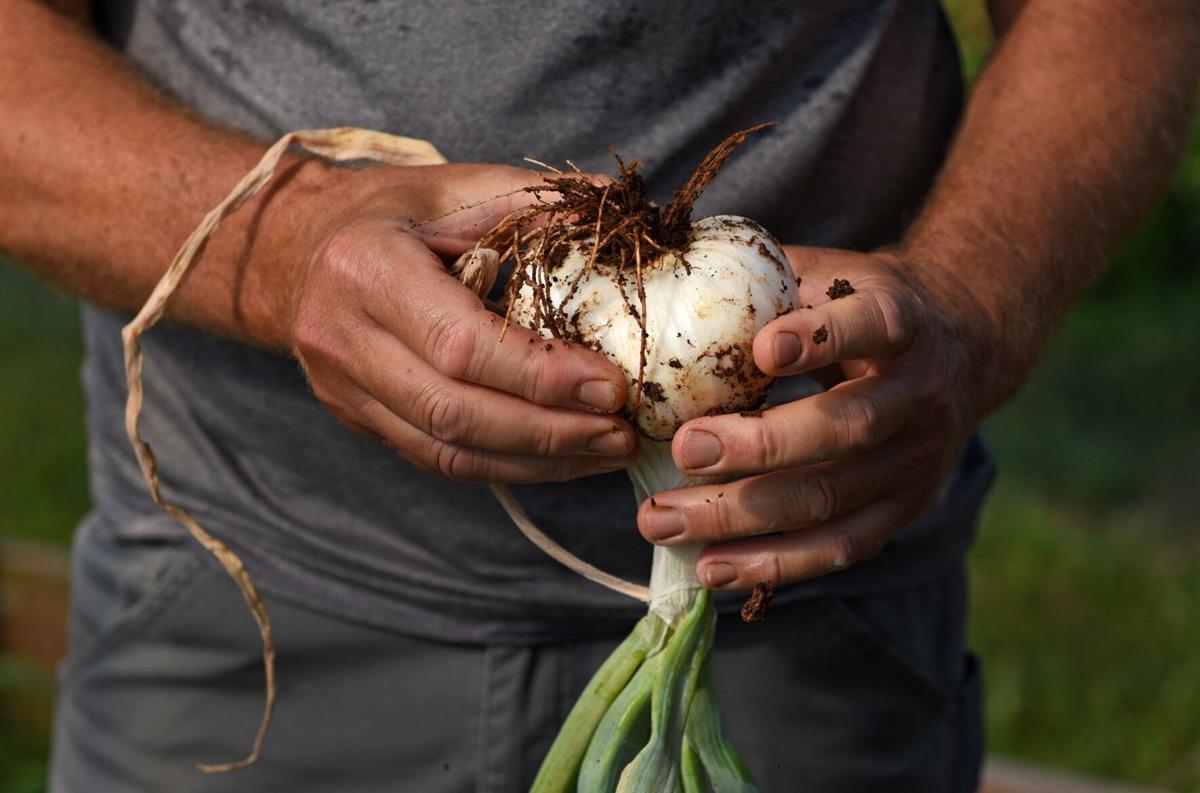 Layher holds an onion he pulled from the soil on his Y River Farm.

Kent Layher and his late wife, Eng Gan, bought property on Williams Road in 2014 from the original owners of Westbend Vineyards. The property, now called Y River Farm, is an outparcel just down the road from the main Westbend property. It slopes down to the Yadkin River and is adjacent to a proposed 246-acre historic preservation site that would be used as a park with walking trails, canoeing and camping.

Layher, 60, grew up in Greensboro but was born in Missouri, where his grandfather ran a 600-acre farm. Gan was of Chinese descent but grew up in Malaysia in a family of coffee growers.

“Eng had wanted to have a farm for years, and she spent a lot of time looking at property. So this was really her idea,” Layher said.

But just three years after the couple bought the property, Gan died of cancer at age 54 in 2017.

Layher has carried on with the couple’s vision for Y River Farm, but progress has been slow. “We tried to hit the ground running, but the ground is terrible,” he said. “There is no soil life — no micronutrients — and that’s what I’m trying to fix.”

Layher laments the fact that so many fruit and vegetables don’t taste the way they should. He longs to reproduce watermelons, corn and more the way he remembers it tasting when he was a child. In short, he wants to farm sustainably, without pesticides or chemical fertilizers. “I’m not organic, but I don’t worry about that. My goal is to grow good food,” he said. “Instead of spending time trying to get certified organic, I spend my time trying to get things to grow right,” he said.

The key to that, Layher said, is creating a rich soil. That has been an uphill battle so far.

When he bought the property, most of the grape vines already had been pulled. But the land, after years of chemical spraying common to the wine industry, was not in good shape.

The other day, Layher dug into the soil to show how little top soil much of his property has. “You dig down and there’s clay but no soil life, no earthworms, nothing. If I dug a shovel in there it would go only this far,” he said, measuring about 3 inches between his thumb and forefinger. “If I tried to hoe here, it would be like hoeing concrete.”

Still, Layher has made some progress in certain parts of the property, and he has planted a lot on the land. It now holds about 1,000 blueberry bushes, a couple dozen Asian pear trees, 30 pawpaws. There’s also a smattering of muscadine grapes, persimmons, cherry and plum trees. Eleven chestnut trees are doing well but not quite producing enough to sell. “That was because of Eng. She loved chestnuts. But I’ve just been giving them away,” he said.

His blueberries had a good harvest last year but after a needed pruning won’t produce enough to sell this year, he said.

Though he wants to focus on fruit, he does grow some vegetables — and that’s mainly what he has been selling this year. His spring crops of lettuce, spinach and beets are finished, but now he is selling tomatoes. Later in the season he will have Silver Queen corn. In the fall, he’ll have more lettuce and bok choy.

Right now, all of his produce is sold right on the farm on Wednesday and Saturday mornings.

For fun, he is growing a second plot of corn for popcorn. That plot will easily make enough for 10 gallons of popcorn, he said, which he’ll let dry in the sun right on the stalk. Last year, that was a Christmas gift to his son and daughter-in-law.

He is slowly improving the soil of select plots of land. “It’s a work in progress,” he said.

He uses no chemical pesticides. “I’ve had to use some chemical fertilizers because the soil was so bad, but I’m backing off that,” he said.

He has brought in wood chips to help improve the soil and keep in moisture. He has used nematodes (roundworms) as a natural pesticide.

He is cautiously optimistic about his progress. “Watermelon is kind of my gold standard. If you can get a good-tasting watermelon, things are getting good,” he said. “It took me five years to get watermelon to grow. Last year, one grew to 40 pounds without me watering or doing anything to it, but it wasn’t a good variety. This year I’m trying some different kinds.”

He joked that he told his wife they wouldn’t make any money farming. “I may go bankrupt before I figure all this out, but once you have healthy soil, it kind of manages itself.

Kent Layher talks about the Asian pears he grows on his Y River Farm in the West Bend area of Forsyth County.

A skipper pollinates a sunflower at Layher’s Y River Farm.

Layher grows watermelon among sweet corn on his Y River Farm in the West Bend area, a planting practice he learned from his grandfathers, who farmed in Missouri.

Layher holds an onion he pulled from the soil on his Y River Farm.