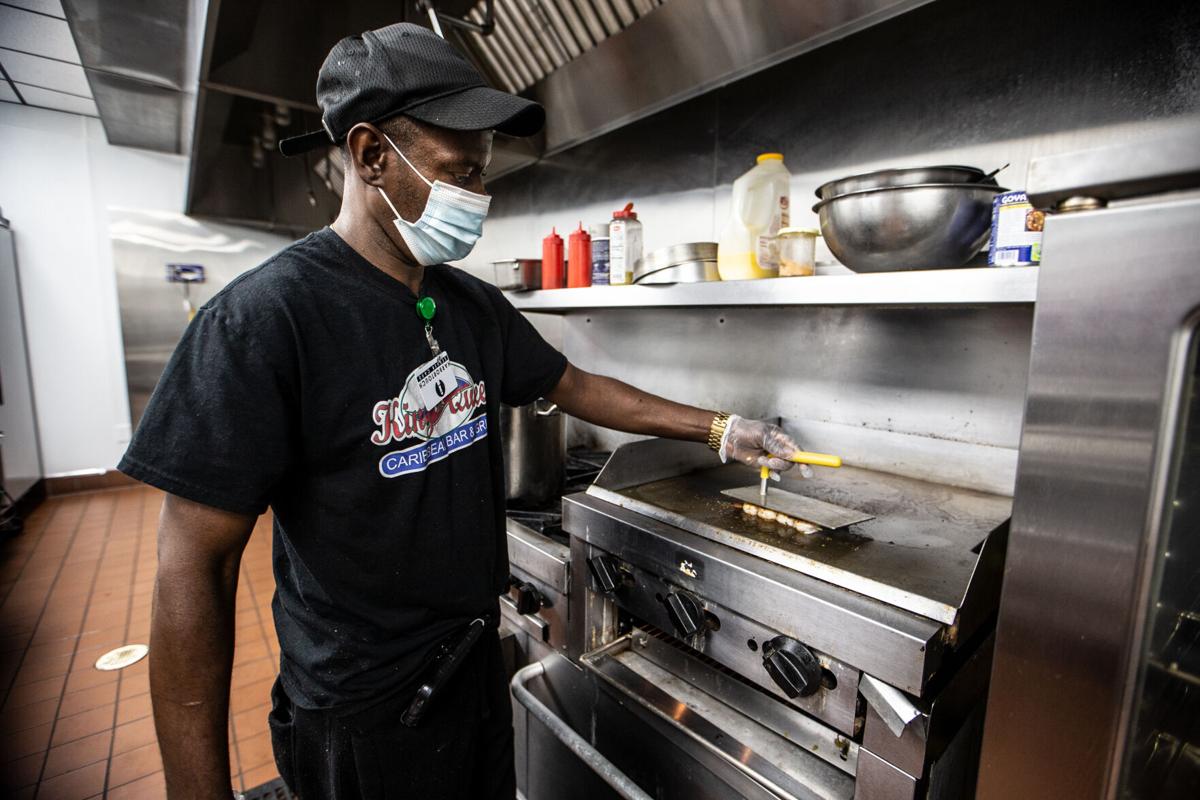 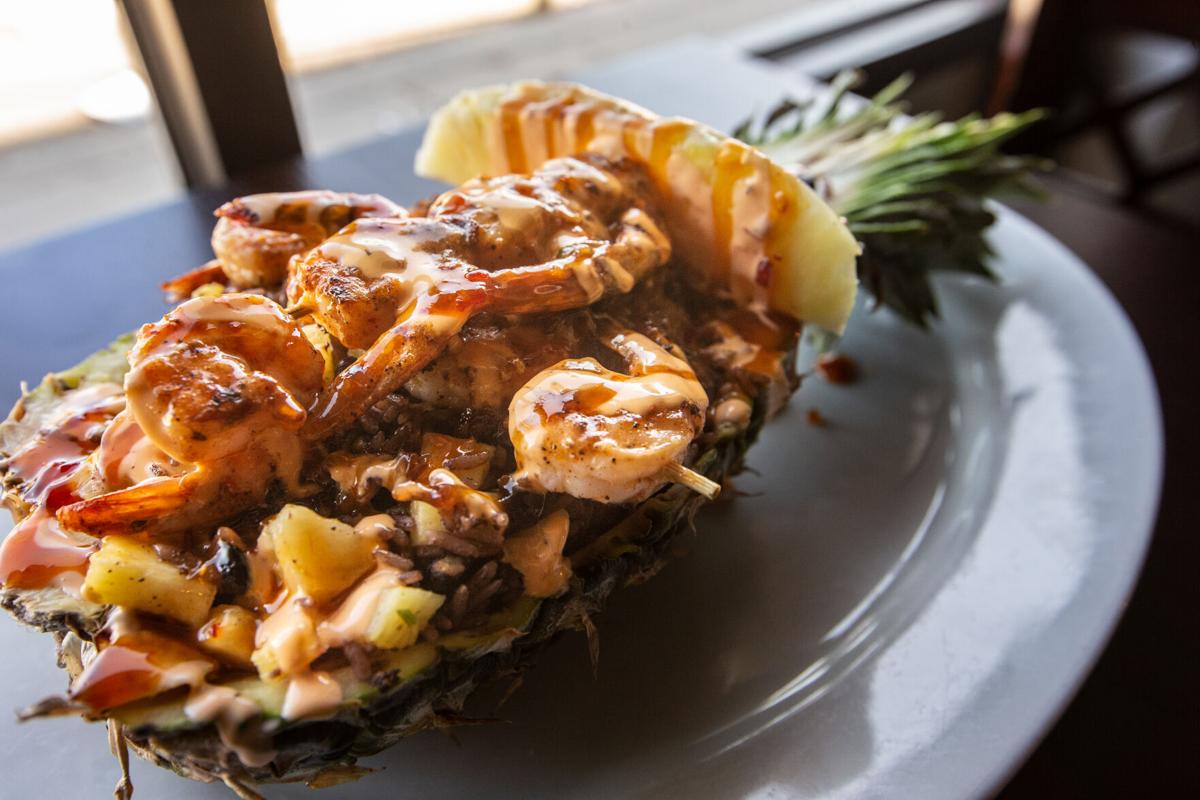 The Shrimp Pineapple Bowl at King-Queen Haitian Cuisine in Whitsett. 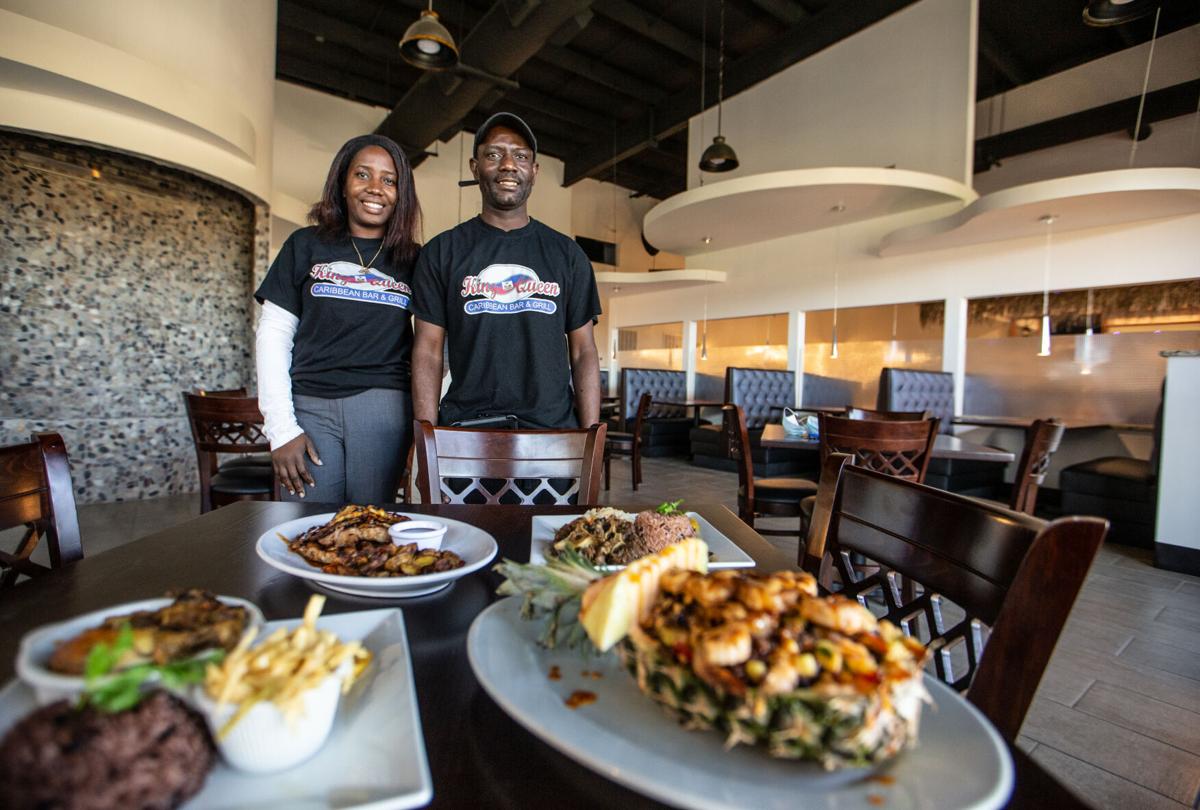 Djosen Vilnor (left) and Hilder Vilnor at their restaurant, King-Queen Haitian Cuisine, in Whitsett. The Vilnors are natives of Haiti who have lived and worked in Guilford County for a number of years. 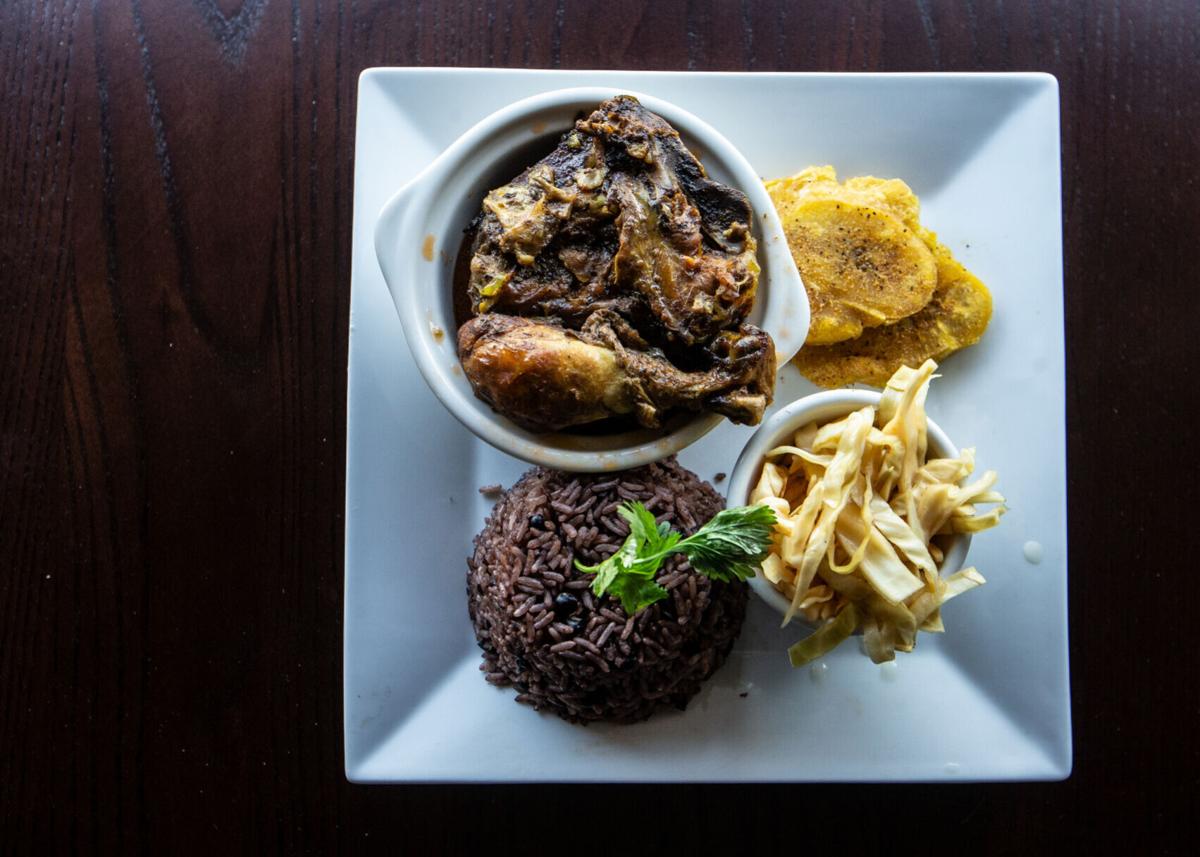 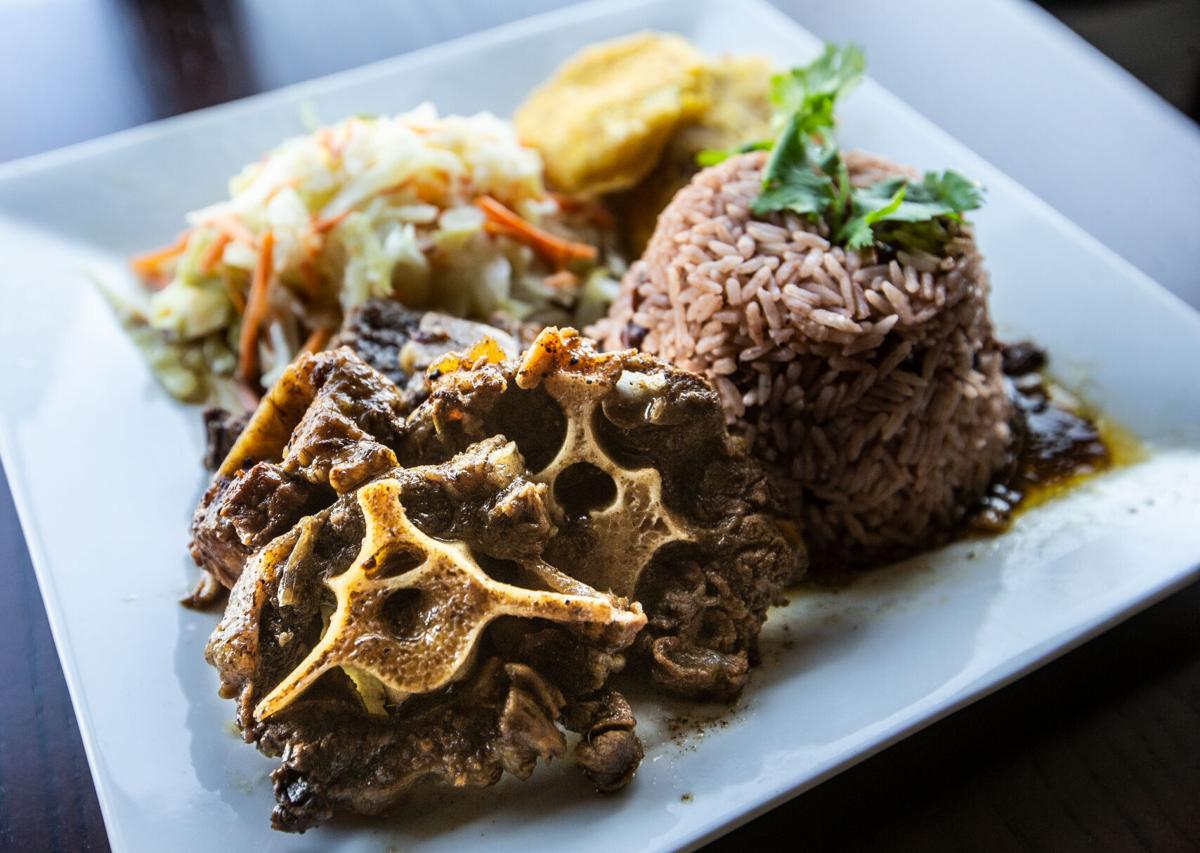 The oxtail plate at King-Queen Haitian Cuisine in Whitsett. 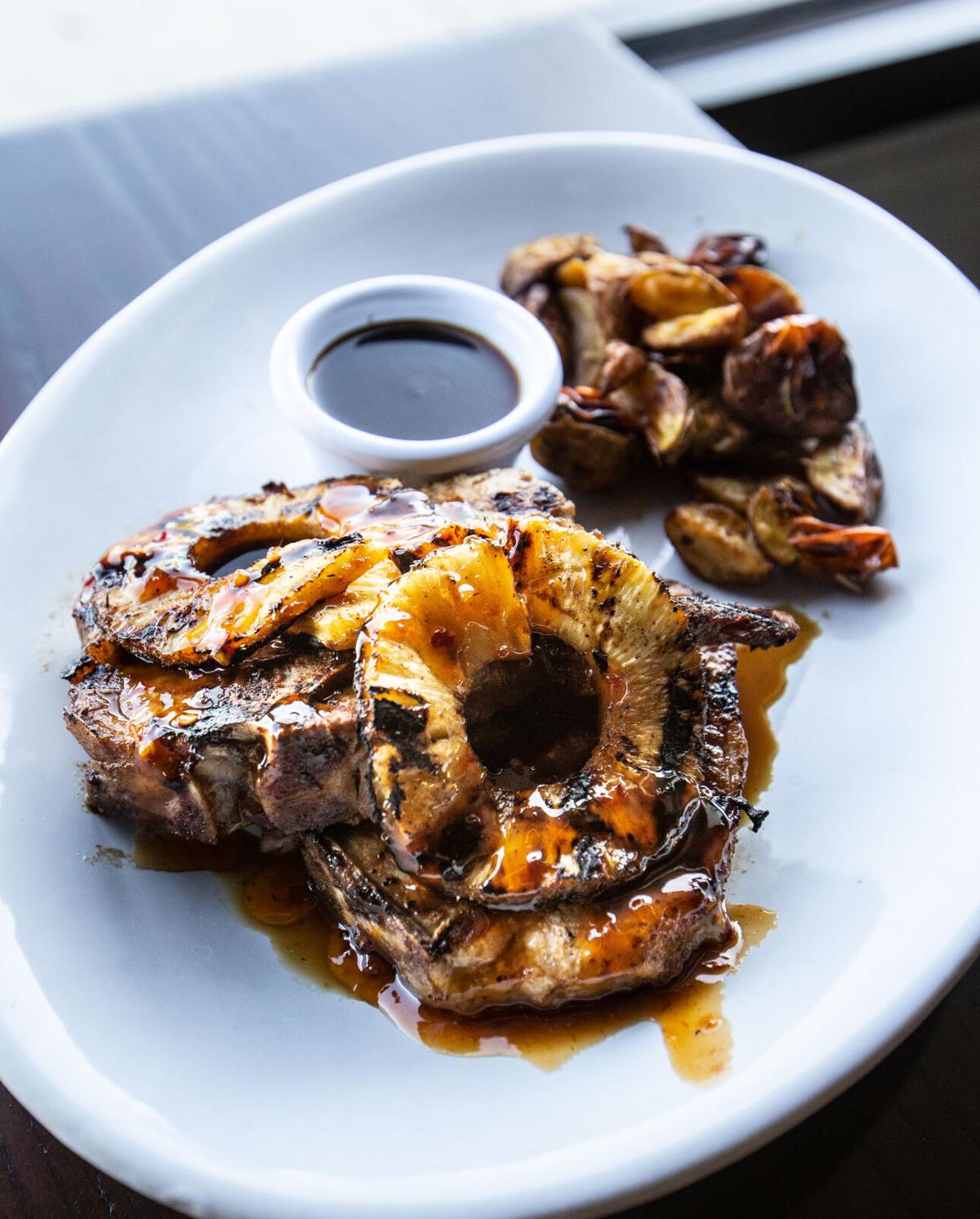 The pork chops at King-Queen Haitian Cuisine in Whitsett. 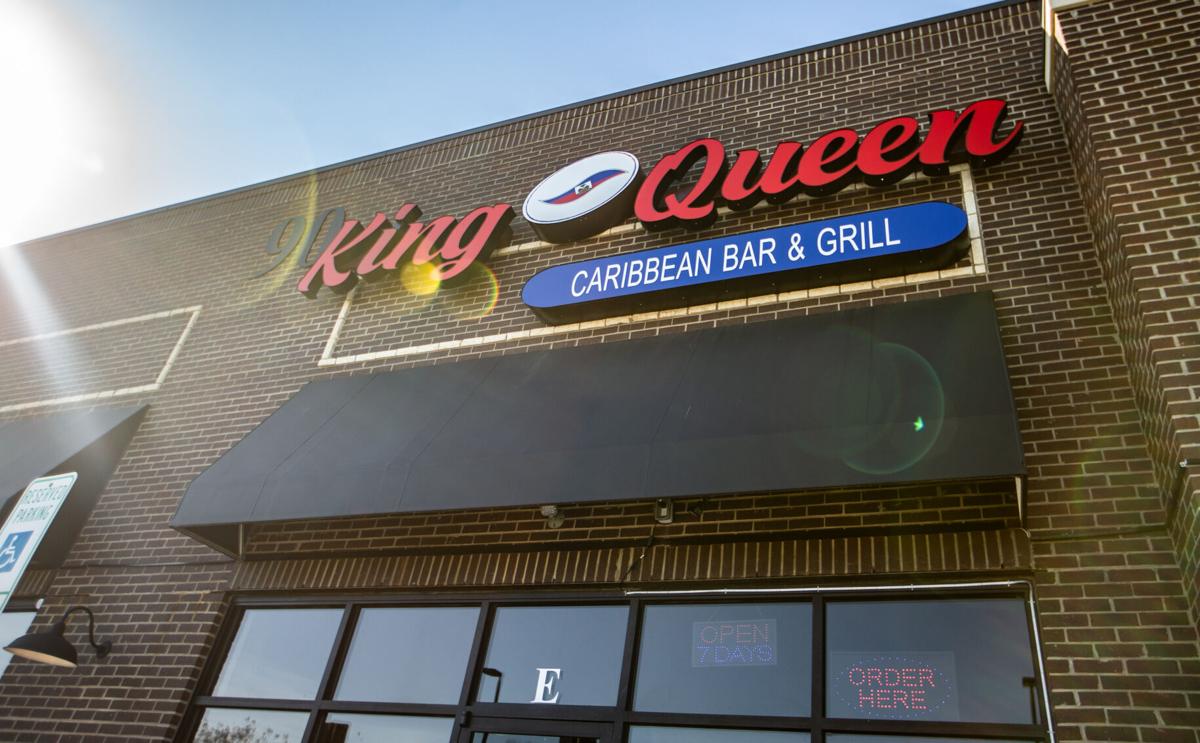 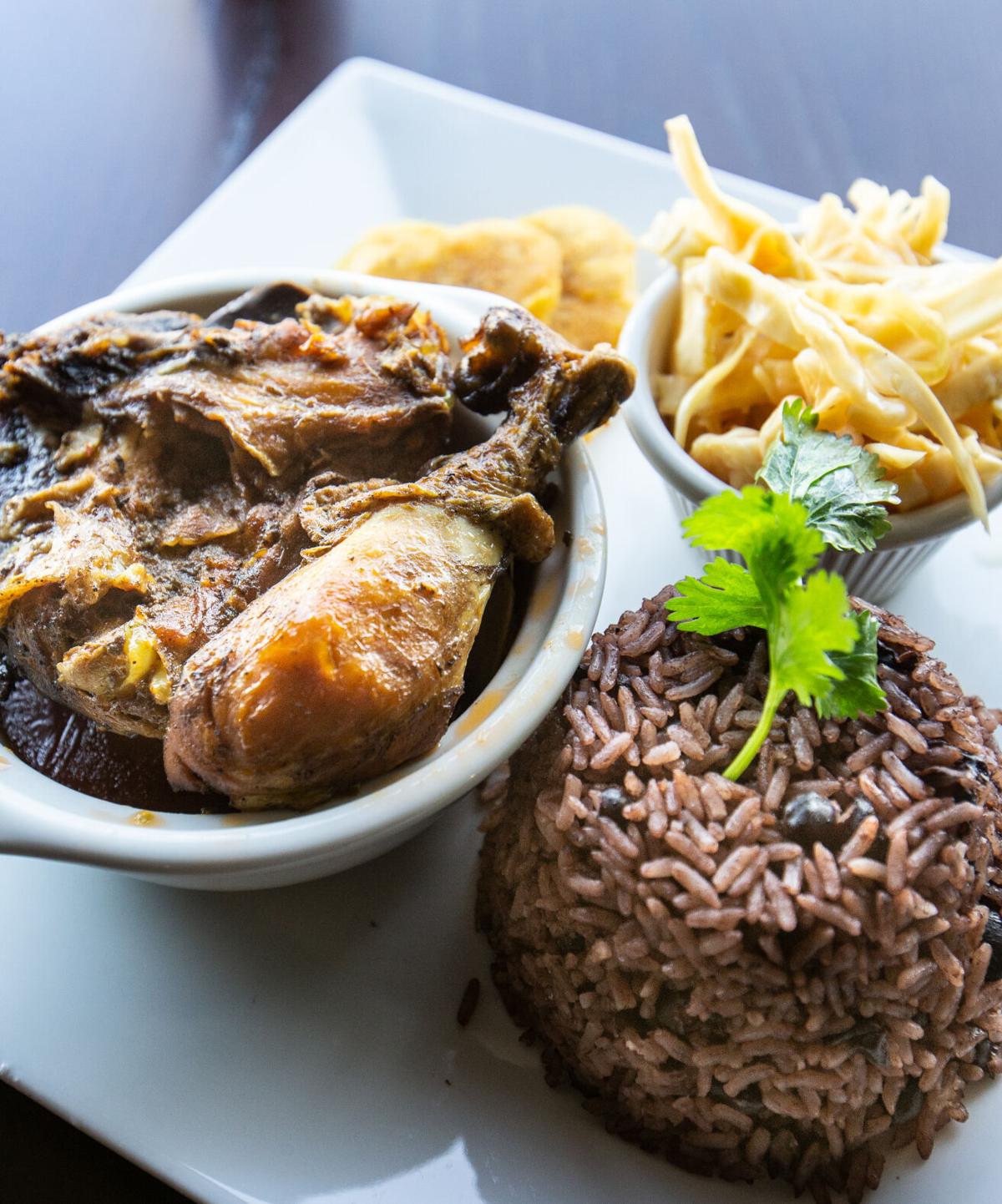 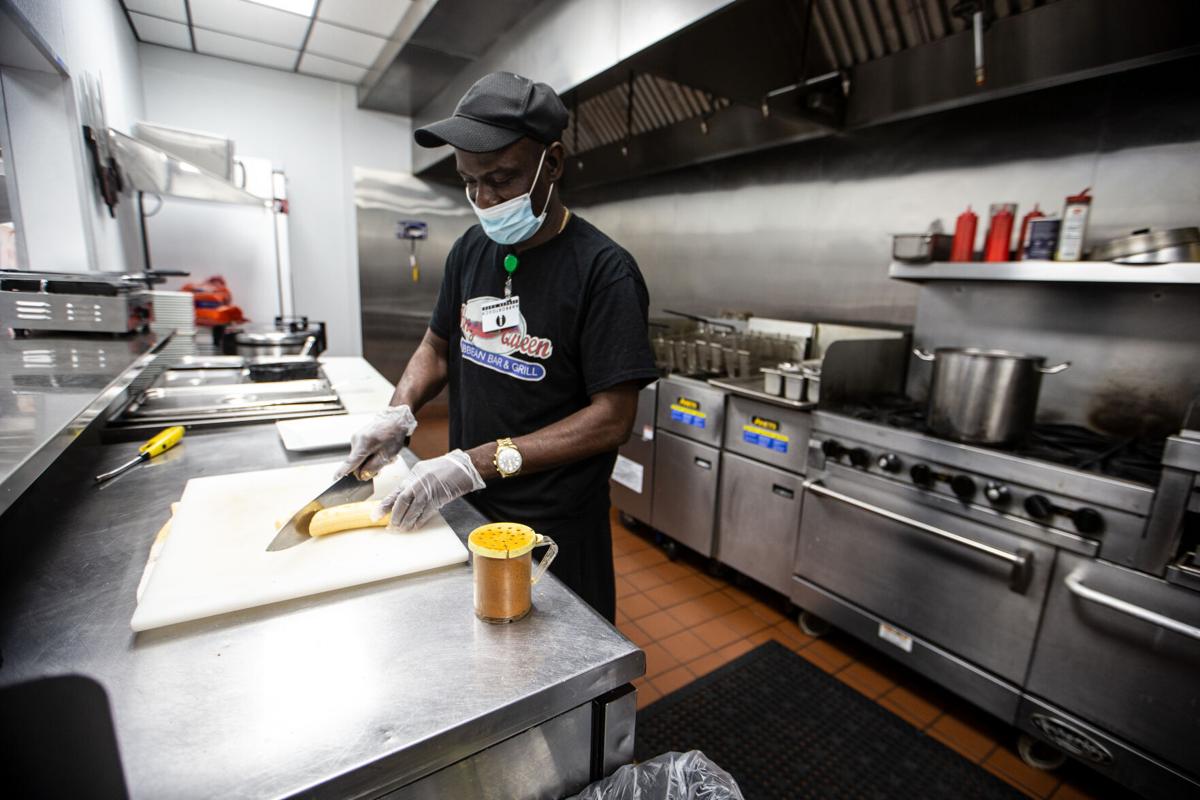 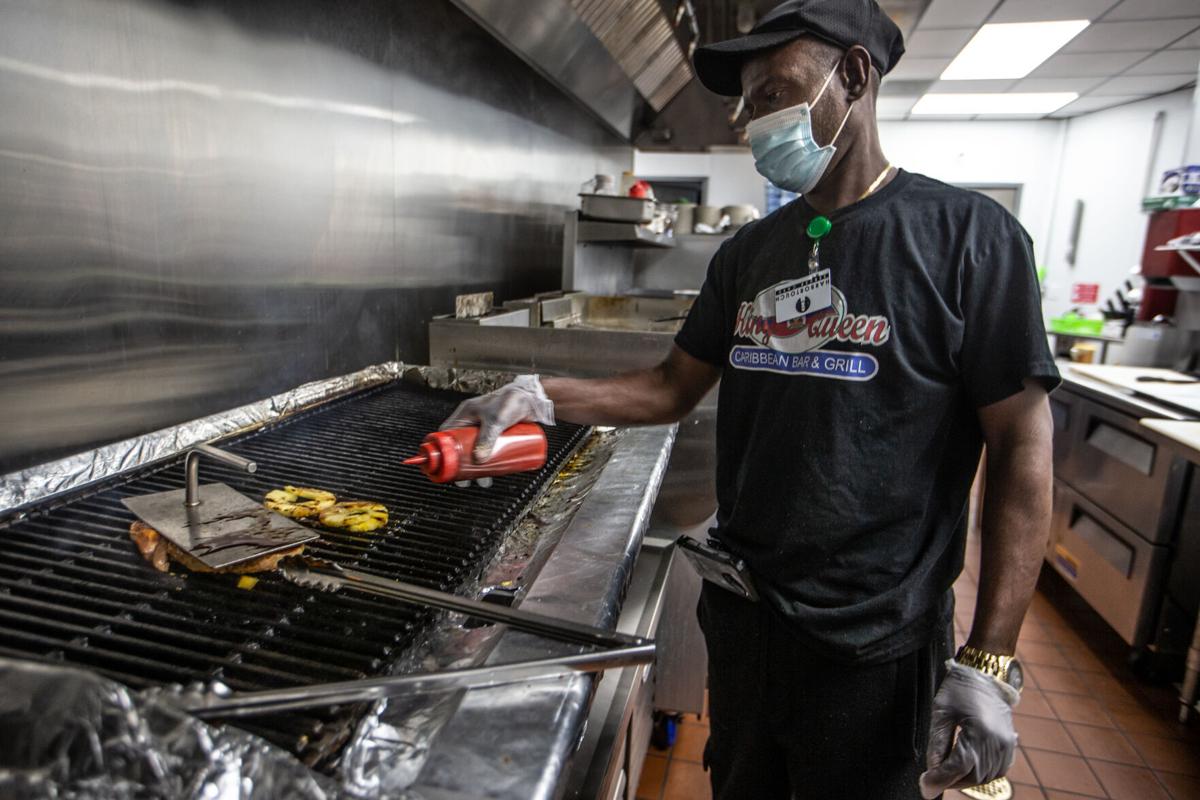 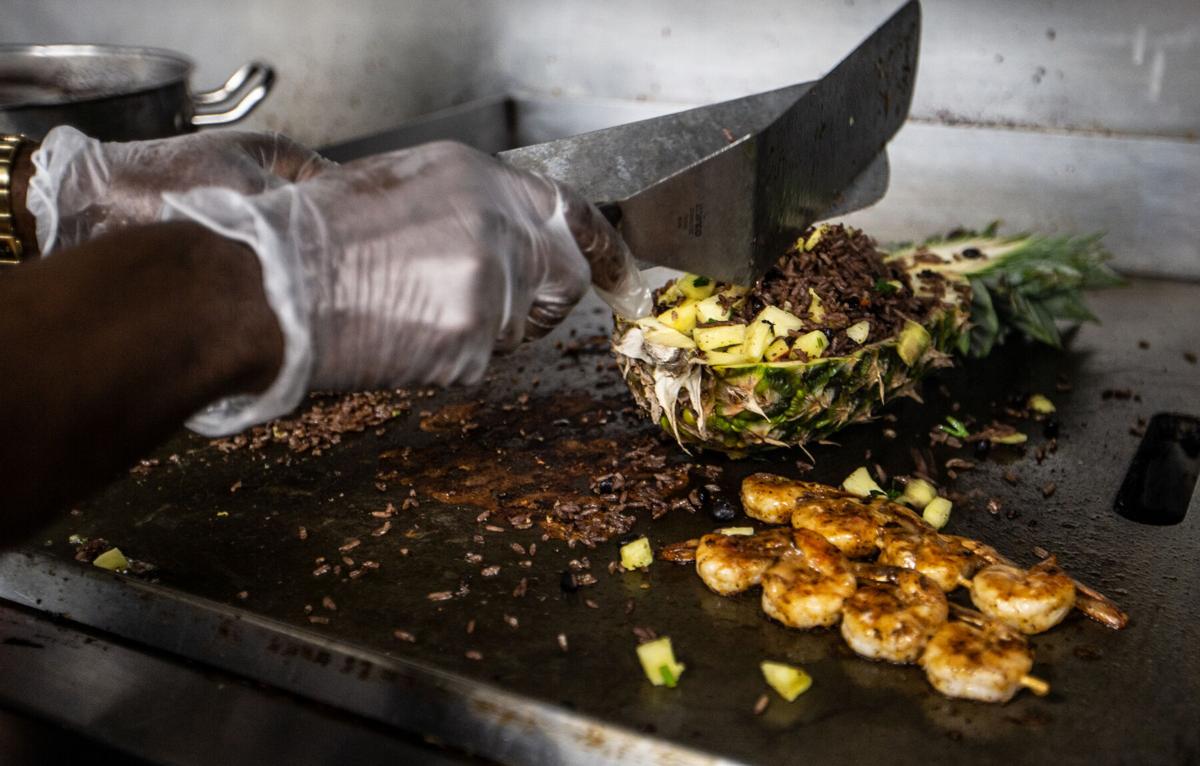 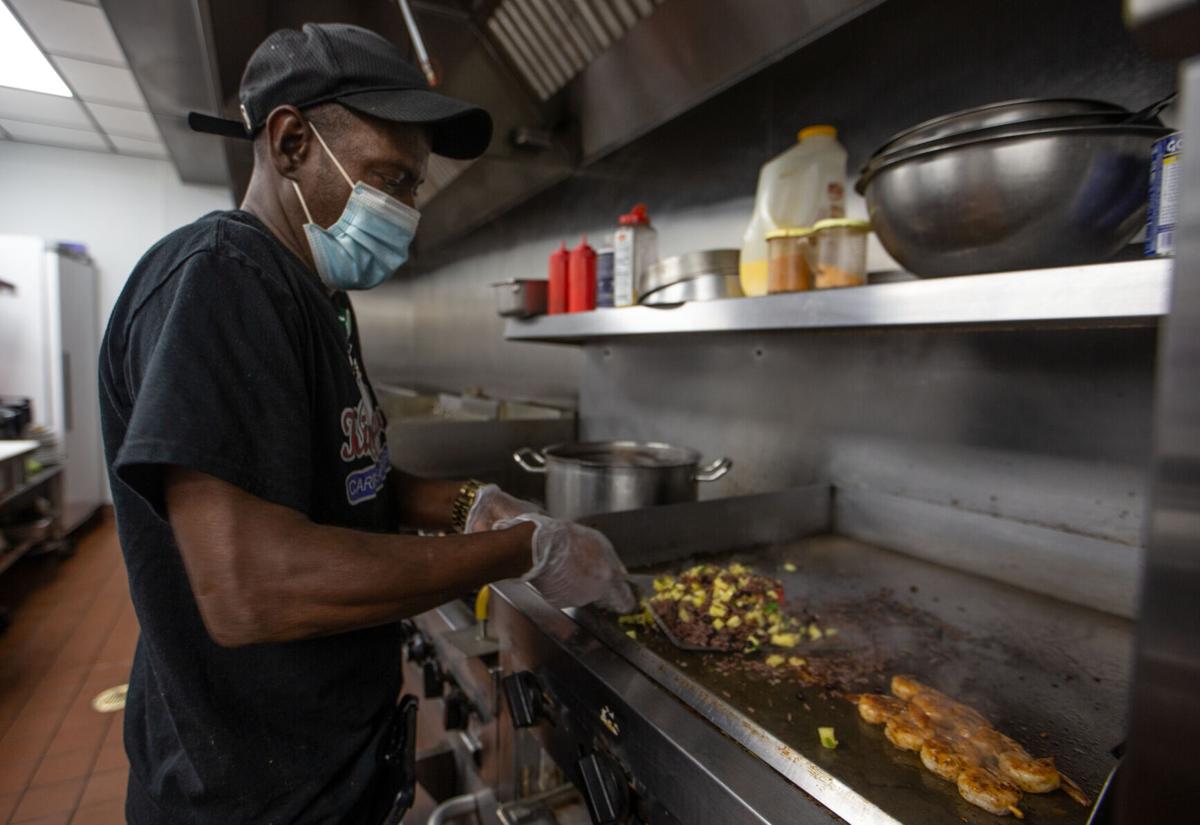 Triad diners who are wondering what happened to the King-Queen Haitian Cuisine food truck may want to take a short trip over to Whitsett.

Brother and sister Hilder and Djosen Vilnor have taken their popular Haitian food-truck concept and turned it into a brick-and-mortar restaurant.

All the favorite foods of King-Queen Haitian Cuisine food truck now can be had at King-Queen Caribbean Bar & Grill in Whitsett, a small town between Greensboro and Burlington. The restaurant, which opened in October, is at 90 Cape Fear Drive in Lindley Park Commons, a small strip center at the intersection with U.S. 70 (Burlington Road).

The Vilnors are natives of Haiti who have lived and worked in Guilford County for a number of years.

Older brother Hildor, 48, came first, in the 1990s and he has been working in restaurants ever since. “I started as a dishwasher because I couldn’t speak English,” Hilder said.

“Then he be watching people cooking and say, ‘I want to learn how to cook,’” said his sister, 31, who goes by DJ.

His restaurant experience took him from Grady’s American Grill to Olive Garden, O’Charley’s and Longhorn Steakhouse.

But as he learned the ins and outs of the American restaurant business, he never forgot the flavors of his homeland. “I learned to cook from my grandmother. She raised me,” Hilder said.

DJ said that her brother was working two jobs at chain restaurants, all the while dreaming of one day working for himself.

Eight years ago, he finally got the chance.

“Hilder kept saying he wanted a food truck,” she said. "We didn’t know nothin’ about food trucks, but he knew how to cook, and I wanted to help him accomplish that.”

Eventually, they outfitted a used truck, and the King-Queen Haitian Cuisine started making the rounds in 2012.

“We struggled at first. We were just setting up at a gas station,” DJ said.

But after an appearance at the Spring Garden Food Truck Festival in Greensboro, business started to pick up.

“We started to have lines. It was shocking,” DJ said.

The truck soon earned a reputation around the Triad, spending most of its time in Greensboro, but also traveling to Winston-Salem.

Before the pandemic hit in March, Hilder and DJ were looking for a brick-and-mortar location.

“Before Hilder even opened the truck, he was saying, ‘I want a restaurant.’ Always in his mind, he wanted even just a small place,” DJ said.

They looked at a lot of locations between Greensboro and Winston-Salem, hoping to find a spot convenient to their two core audiences, but nothing ever quite worked out.

Then DJ kept driving past this place for lease in Whitsett.

“This place is not far from our house. This place, I felt like God was directing us to it,” DJ said. “We just always passed it, and it was sitting there, and one day we stopped and talked to the landlord. He wanted something different in there, and we told him we cook Haitian.”

The Vilnors were able to build their own kitchen and design their dining room from scratch at King-Queen Caribbean Bar & Grill. The sleek, contemporary dining room, in primarily black and white, is spacious. It can seat 85 people at full capacity, or about 42 to comply with COVID-19 restrictions. It has a full bar offering beer, wine and cocktails, with seating for at least 12.

The dining room is open for lunch and dinner seven days a week, but DJ said the bulk of their business now is takeout. DJ and Hilder are doing everything themselves except for bartending on busy nights.

For the time being, the truck is sidelined, but Hilder said he hopes to get it back on the road by spring — and he’ll have to hire someone to operate the truck so he can be at the restaurant.

The Vilnors decided to use the word “Caribbean” instead of “Haitian” in the restaurant’s name to appeal to a broader audience, but they always have had a wide appeal. They still offer items such as burgers, tacos, quesadillas and wings. DJ said that the wings ($11.99 for 10), which can be ordered Jerk or Buffalo style, are particularly popular.

In addition to a three-cheese burger, customers also can get a pineapple or avocado burger ($13).

Grilled pineapple shows up in several places on the menu. Grilled pork chops ($17.99) come with pineapple teriyaki sauce and slices of fresh grilled pineapple. One of the most popular entrees is the pineapple bowl ($16.99) – a pineapple half filled with beans, rice, red bell pepper and fresh pineapple, topped with King-Queen’s signature chile sauce and served with a choice of grilled shrimp, chicken or steak.

The restaurant also serves classic Haitian fare such as oxtails and jerk chicken.

Hilder said he understands that many people think Haitian food is just like Jamaican food, but the two cuisines aren’t exactly alike. “They are similar. We use the same seasonings, but the preparation is different," he said.

For example, jerk chicken in Jamaica is marinated then grilled; in Haiti, it’s marinated and braised like a stew.

Chicken at King-Queen is also served with a Haitian barbecue sauce, deep-fried with island spices, over a Creole-style pasta and stuffed with crabmeat and mozzarella.

Black beans and rice come with many of the dishes. Other sides include fried plaintains, roasted potatoes, green beans and broccoli.

Some of the food is spicy but not all. Some dishes can be made mild or spicy by request. If you like a spicy kick, be sure to try the “pikliz” or pickled cabbage made with Scotch bonnet peppers.

Among the desserts are Haitian rum cake ($7.99), and beverages include Haitian cola and fruit punch.

Though the couple now lack the visibility they had with the truck in high-profile spots around Greensboro, they hope their fans with seek them out.

DJ said that when you hear about Haiti in the news, it’s often something negative about poverty or civil unrest. She wants Americans to see the good side of Haiti.

“You hear a lot of people saying Haitians are not good people. We just want people to give us a chance and get to know Haiti,” she said.

“We are a family-owned business. We want people who come here to say we treated them like family. We want them to feel welcome.”

A new mobile food market will debut June 18 to help give more people in Winston-Salem access to locally grown fruits and vegetables.

Clemmons has a new restaurant specializing in both ramen and sushi. Raku Ramen & Sushi opened May 23 at 1445 River Ridge Drive in a former…

The Shrimp Pineapple Bowl at King-Queen Haitian Cuisine in Whitsett.

Djosen Vilnor (left) and Hilder Vilnor at their restaurant, King-Queen Haitian Cuisine, in Whitsett. The Vilnors are natives of Haiti who have lived and worked in Guilford County for a number of years.

The oxtail plate at King-Queen Haitian Cuisine in Whitsett.

The pork chops at King-Queen Haitian Cuisine in Whitsett.