Chef Justin Webster is a former chef at Krankies, where he worked for about two years, first as sous-chef and then as head chef, where he honed Krankies’ popular biscuit-blessed menu.

Webster, a graduate of Mount Tabor High School, grew up the son of a chef. His dad, Brian Webster, worked with Aramark food services, including a 10-year tenure as catering director at UNCSA.

Justin Webster has worked at such restaurants as Hakka Chow, Trade Street Diner, Jeffrey Adams and Honey Pot – the latter of which also occupied 285 W. Fourth.

He also did a year-long stint on the Burger Supreme food truck. “That’s where I really got into smash burgers,” he said.

Smash burgers are pretty much just what you would guess: The ground beef is placed on a flat-top grill (or hot pan) and gently smashed. The smashing increases the surface area of meat that comes in contact with the grill and increases the opportunity for what is known as the Maillard reaction, which gives browned food extra flavor.

Webster’s idea for the restaurant began with a pop-up he did down at Krankies. For a while now, Krankies has been inviting food trucks and others on weekend nights for a kind of outdoor pop-up that it calls Club Yeti. “One time someone couldn’t make it, so I did the pop-up,” Webster said. “I did smash burgers, and they sold out almost instantly. And I thought, ‘This is something that has legs.’”

After leaving Krankies in March 2021, Webster honed his burger concept, doing multiple pop-ups at Hoots Beer Co. and other places around town.

Heff’s Burger Club – named after Heather Webster’s nickname – has a short and sweet menu and concept based on some of Webster’s memories of fast-food burgers while growing up. “I grew up in the ‘90s going to places like McDonald’s,” Webster said. “This is an homage to the burgers I had as a kid. What I’m doing at Heff’s is taking fast-food burgers and elevating them.”

Heff’s has five burgers, available with one or two 4-ounce patties. Webster is using local grass-fed beef from Joyce Farms, local pickles from Niki’s Pickles and brioche buns made especially for Heff’s by Annie’s Bakery in Asheville.

The Ladykiller ($10 for a single, $13 for a double3) is Webster’s take on a Burger King Whopper with white American cheese, red onion, lettuce, Niki’s pickles and black garlic sauce.

The Seoulmate ($11/$14) was inspired by Hakka Chow’s kimchi cheese fries. It has white American cheese, kimchi, bacon and gochujang mayo.

Last but not least is the Chillbilly ($11/$14). It features the green-tomato chowchow popular in Virginia where Webster was born, plus white American cheese, lettuce, bacon and sweet chili ranch sauce.

There are only three other foods on the menu: grilled cheese for kids ($4), crinkle-cut fries ($4) seasoned with Webster’s secret spice blend and loaded piggy cheese fries ($8).

Beverages are bottled water and sodas.

Heff’s offers counter service. “You order at the counter and then just to be obnoxious we have a megaphone to call you to pick it up,” Webster said with a laugh.

He’s working on getting an ABC permit, at which point he’ll begin selling Hoots beer in cans.

A website is in the works with online ordering through Toast and delivery through DoorDash.

Customers will notice one other option on the menu. Buy a Meal is not a combo offering but instead an opportunity to make a donation to help the homeless.

“For $8,” Webster said, “you can buy a burger and fries that we’ll give to the Winston-Salem Rescue Mission.”

Travis Barker is already back on stage against doctor’s orders 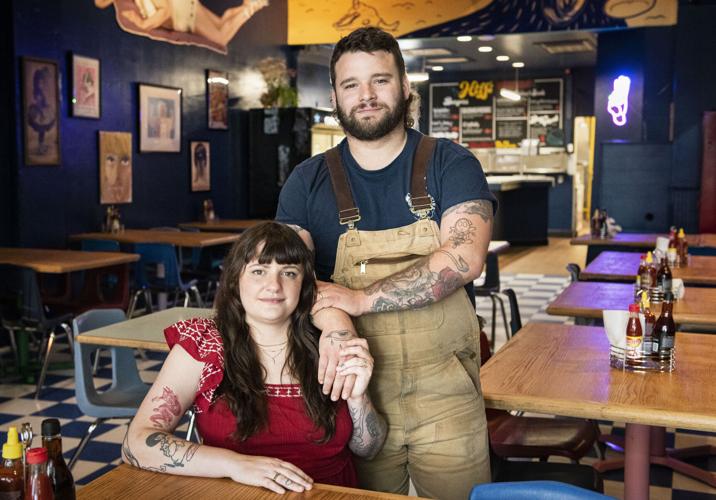 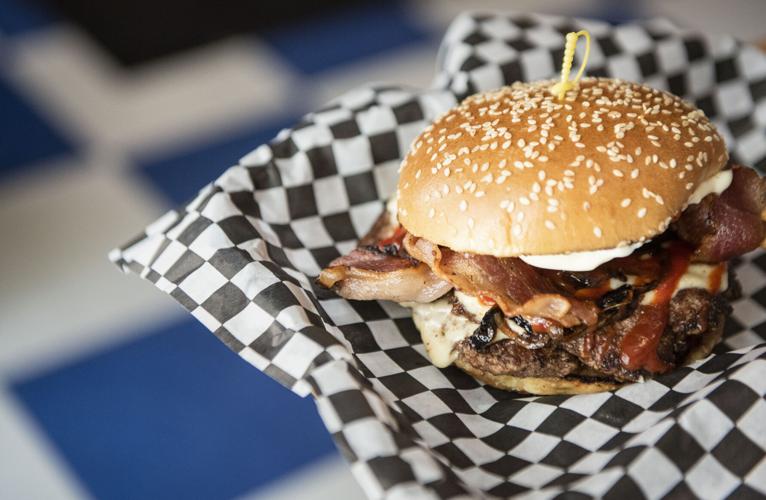 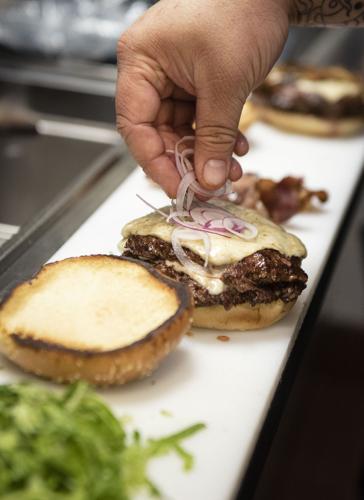 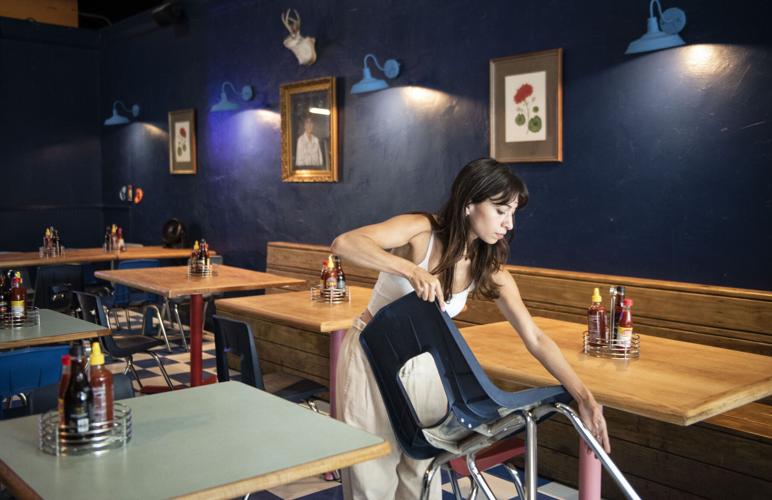 Karla Cavaleri takes the chairs down in the dining area at Heff's Burger Club. 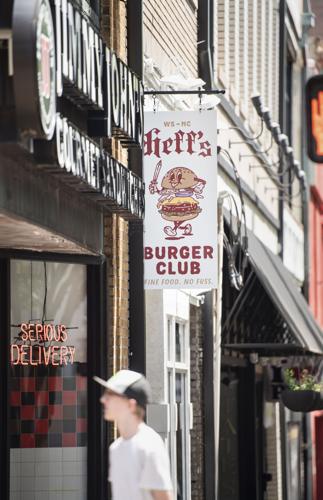 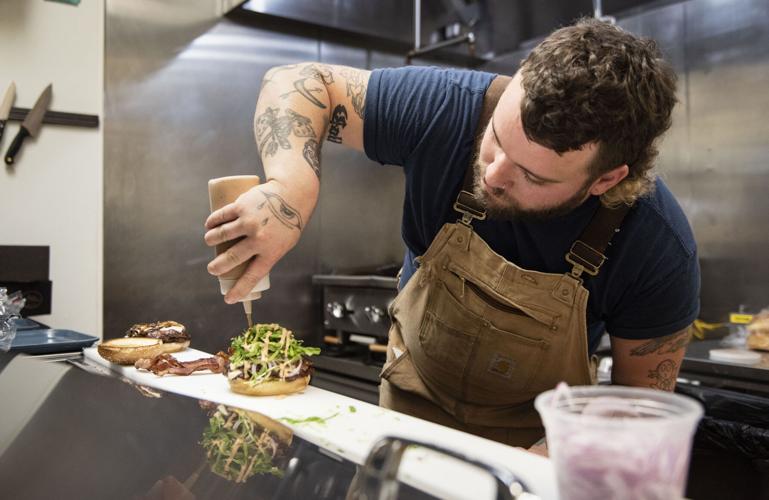 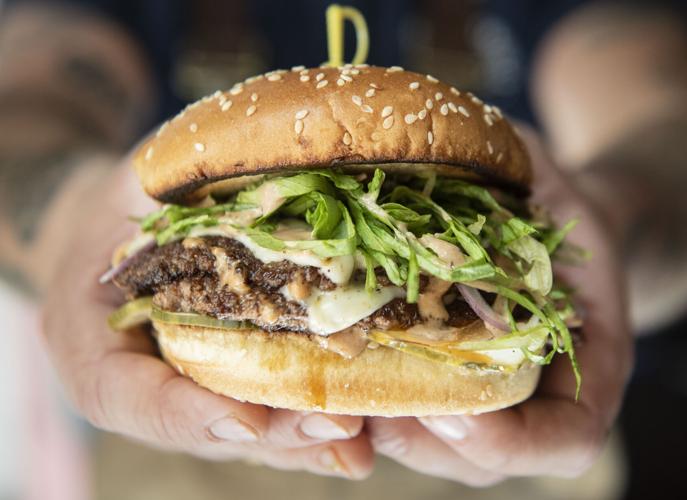 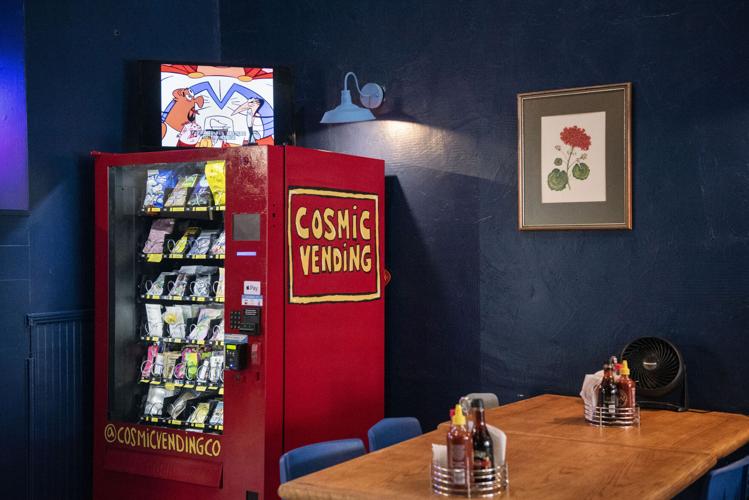