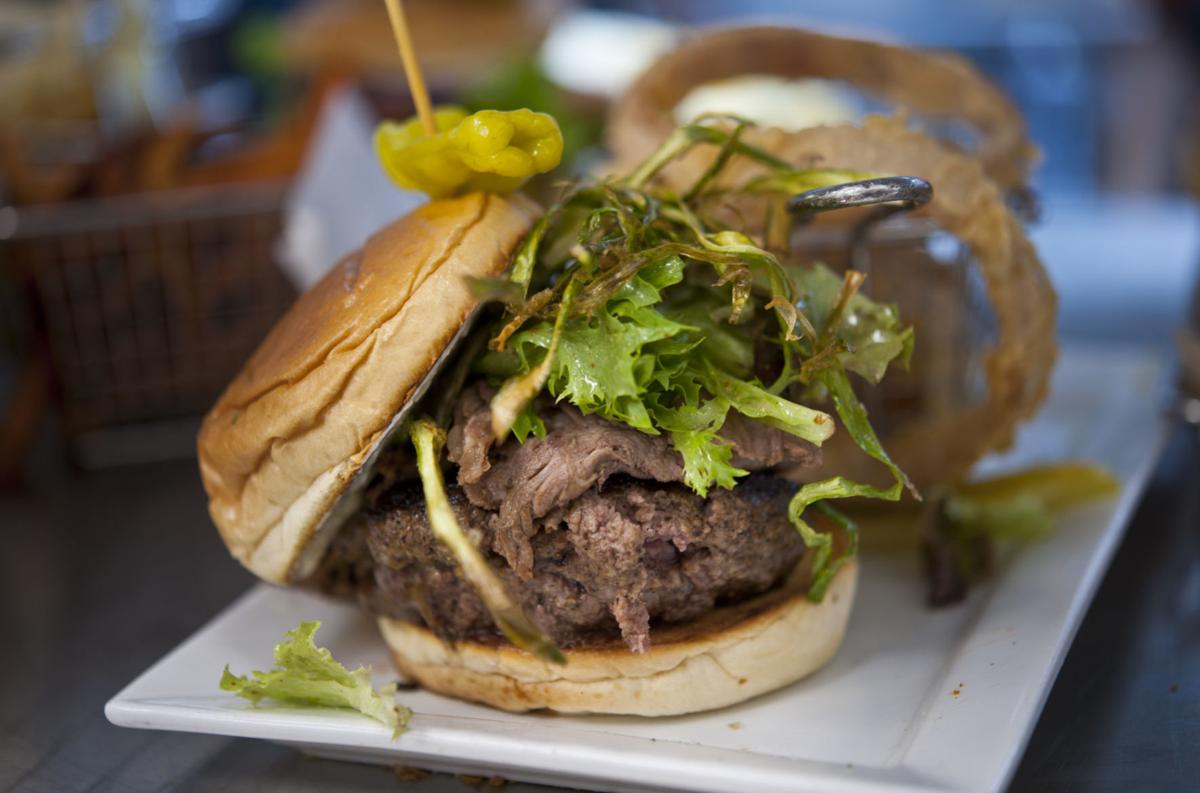 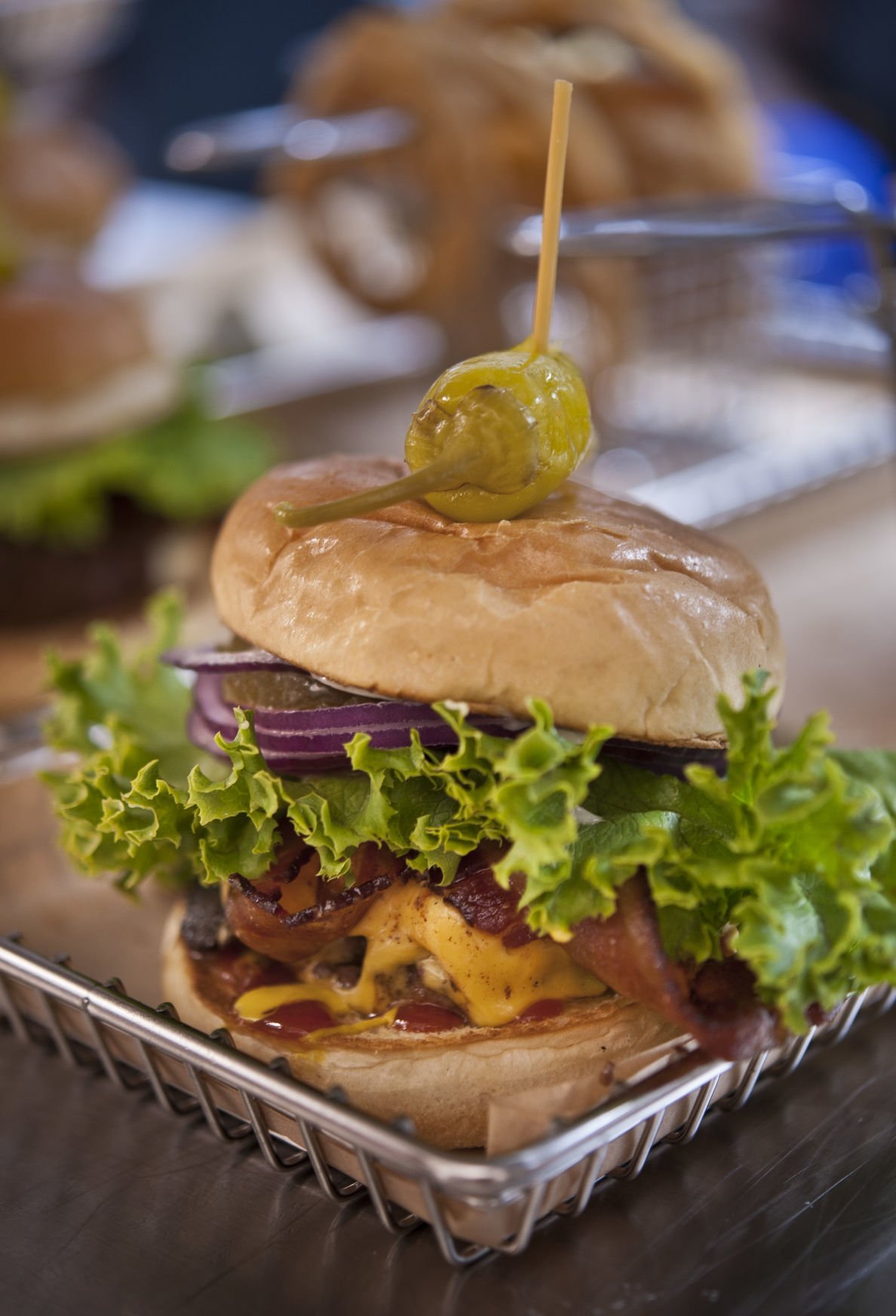 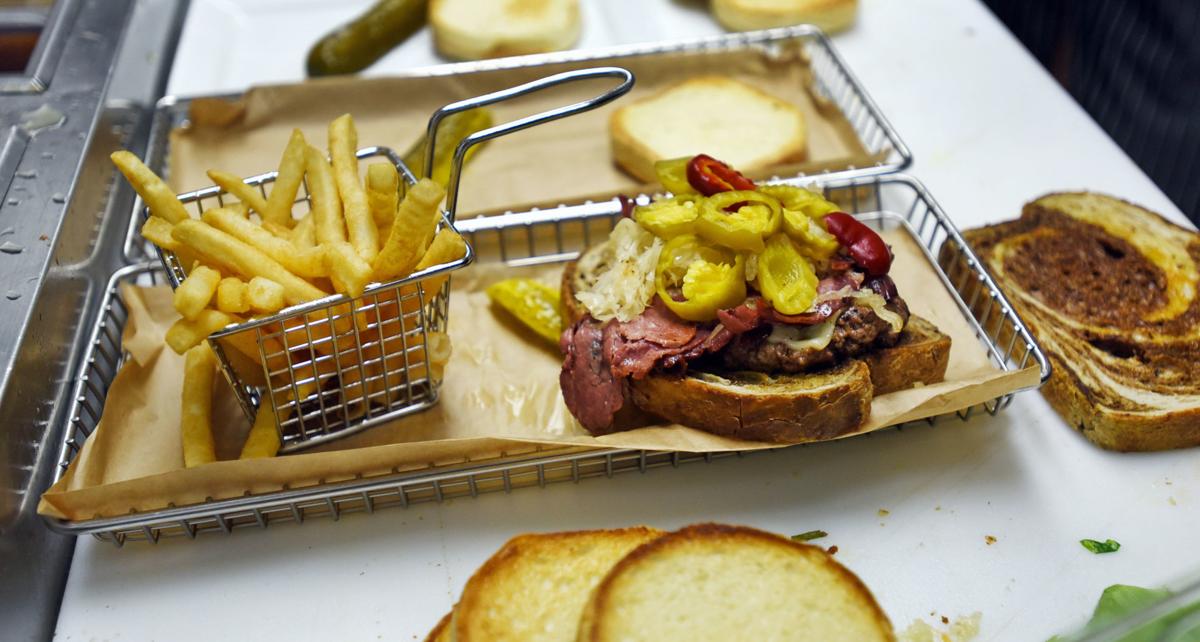 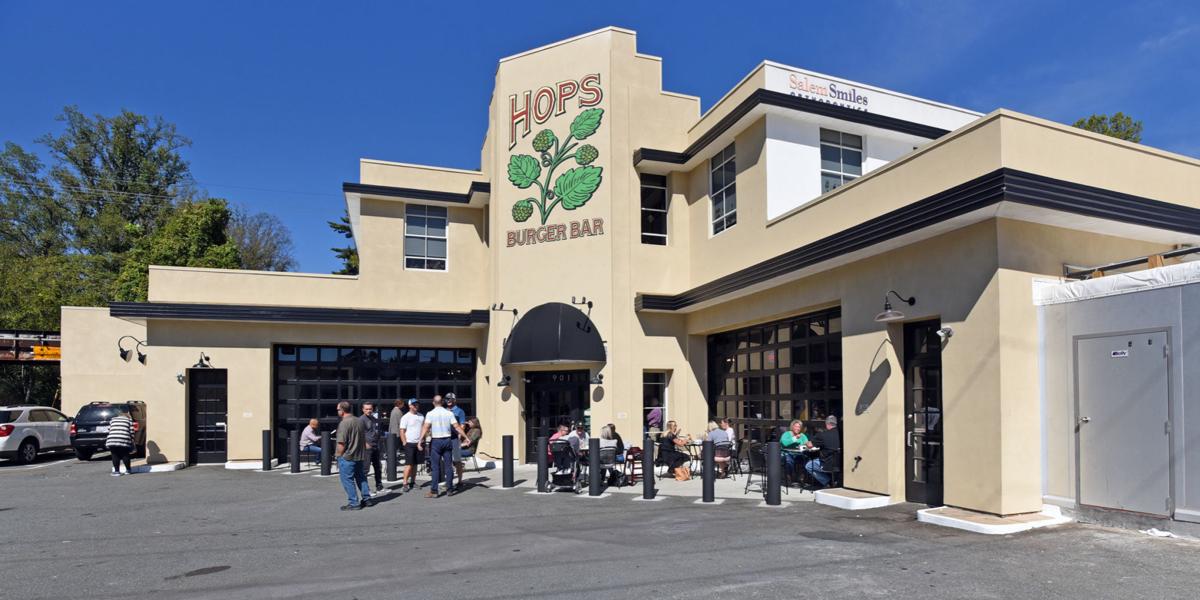 Hops Burger Bar at the corner of Northwest Boulevard and Reynolda Road. 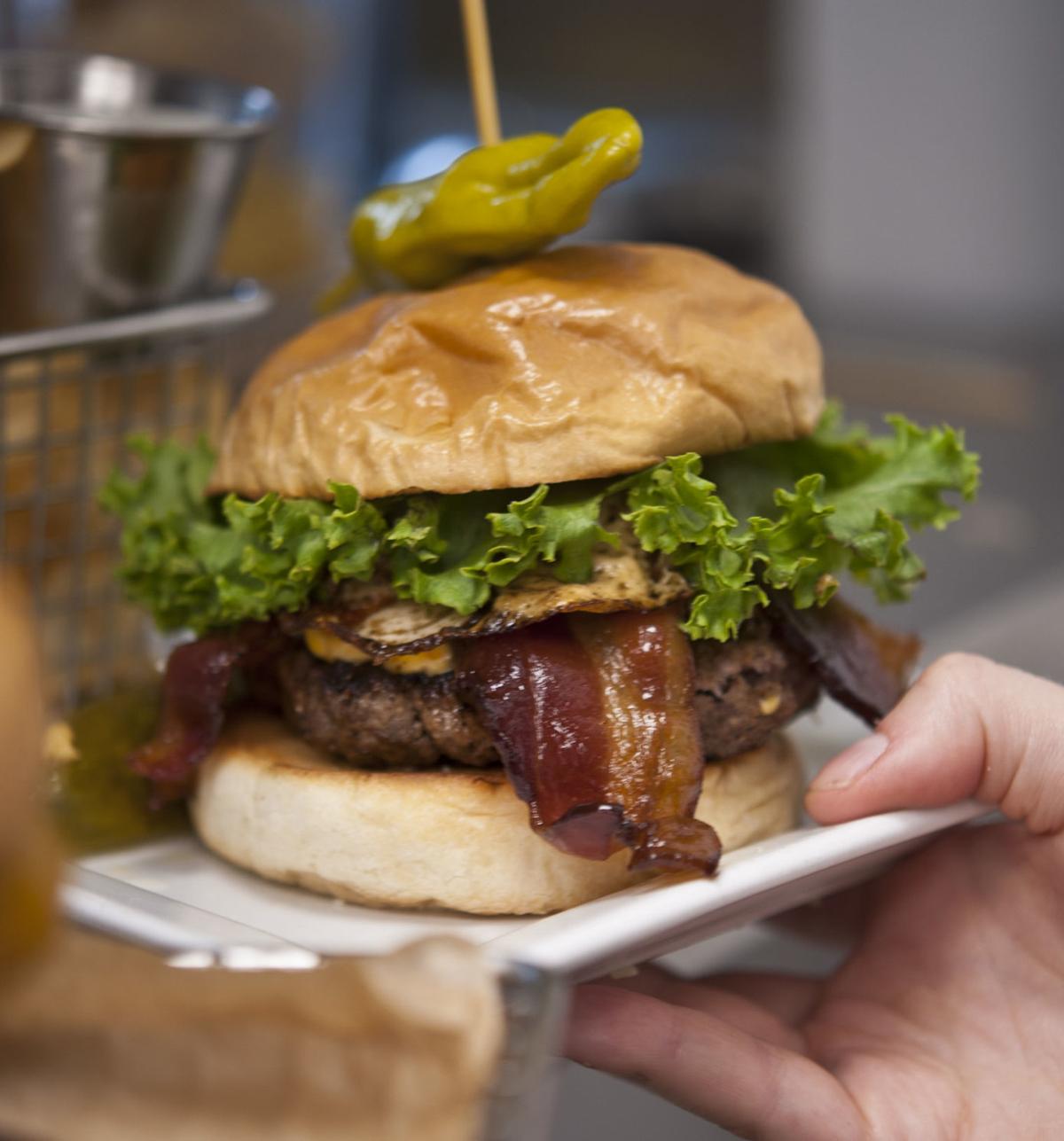 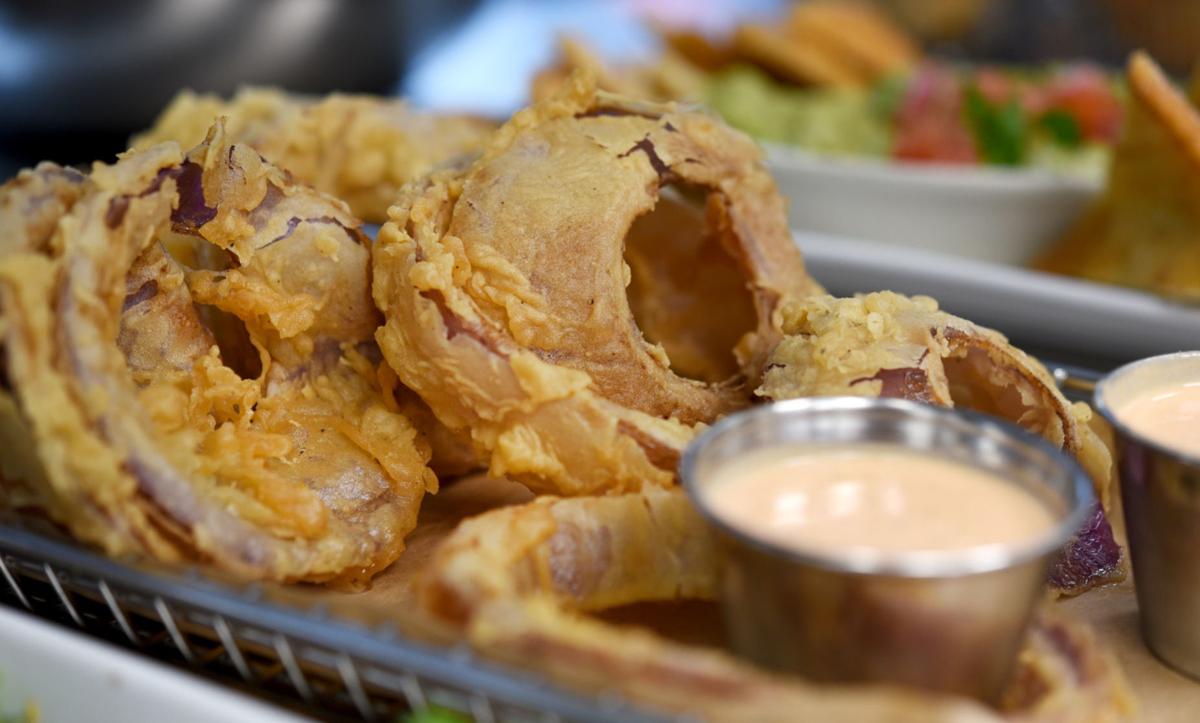 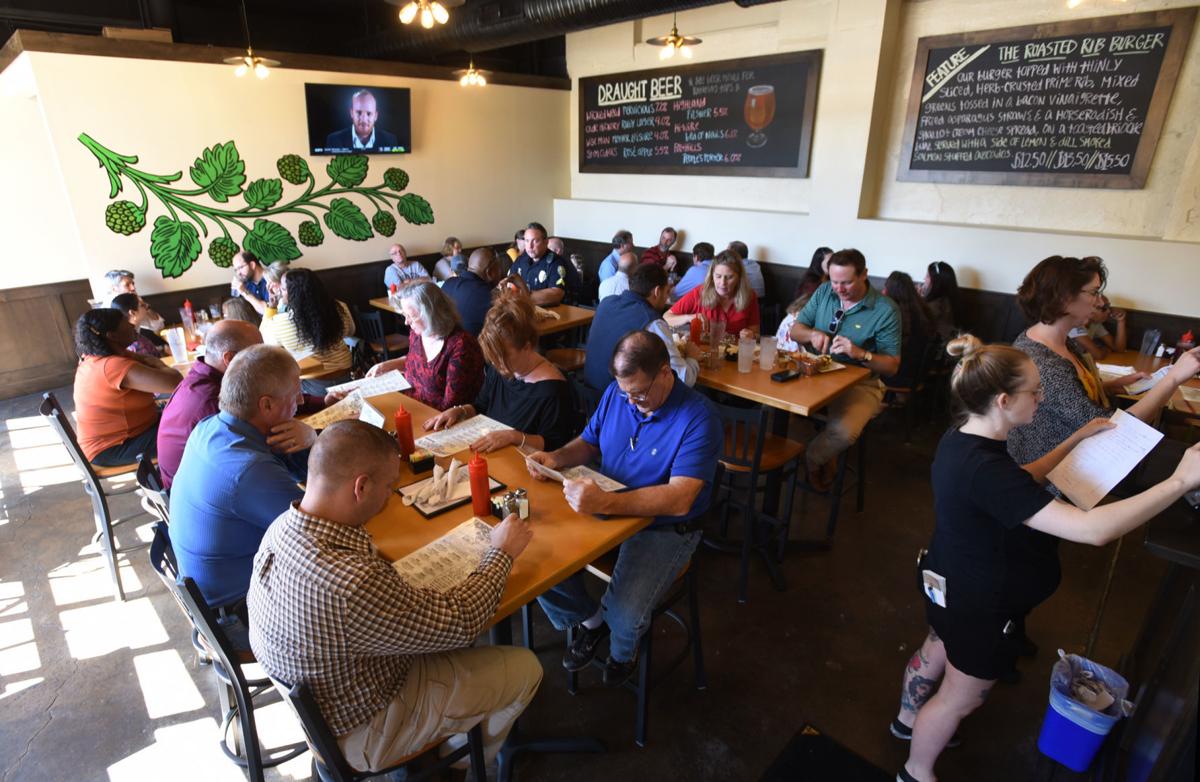 A full house at Hops Burger Bar at the corner of Northwest Blvd and Reynolda Road. 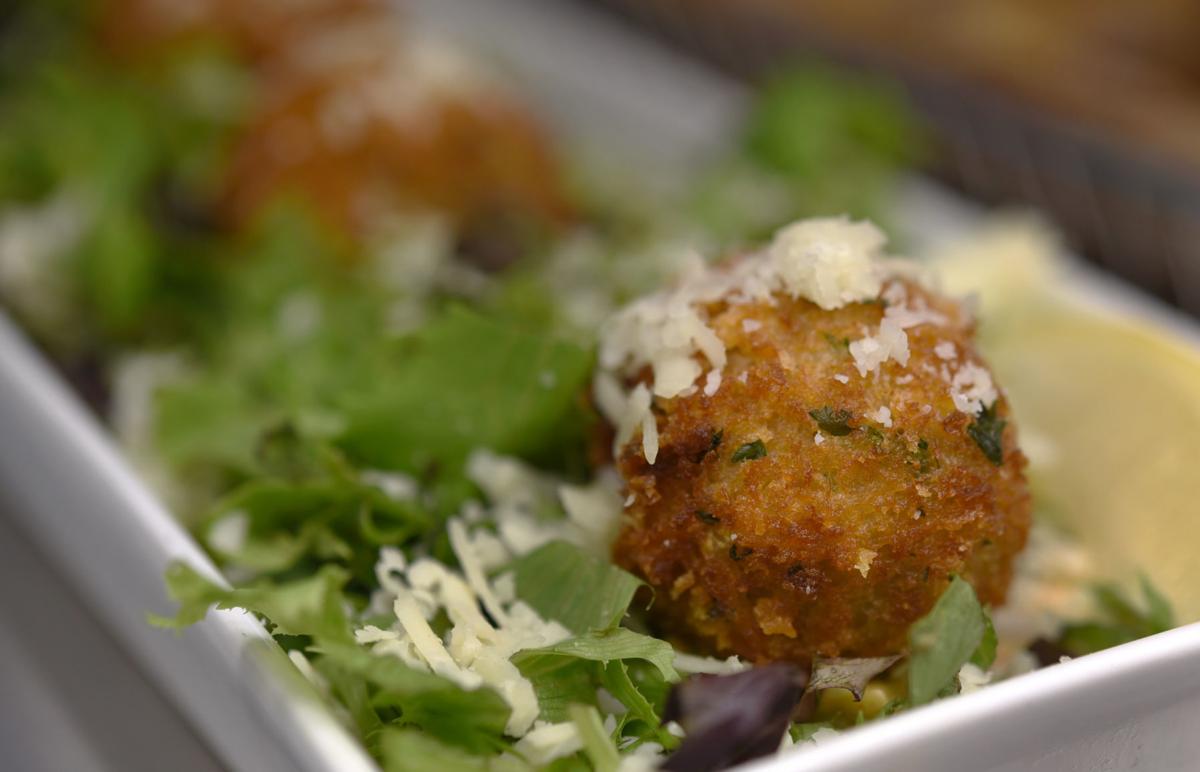 Within an hour of opening Thursday, Hops Burger Bar was packed inside and out at its new location at 901 Reynolda Road in Winston-Salem.

Owners Chris Martin and David Essa spent more than a year turning the former Carmine’s 901 Grill at the corner of Northwest Boulevard into their Hops location, which opened at 11 a.m. Thursday. So Winston-Salem diners have been watching and waiting for almost a full year to enjoy this popular Greensboro-based restaurant without a 30-minute drive.

“We had a few setbacks,” Martin said of the renovation. “But mainly our idea was evolving — that’s just how we do things.”

Hops is known for its big, creative burgers and craft beer. “Burgers are our main focus, and craft beer is a close second,” Martin said.

Hops' menu offers burgers with up to 12 ounces of ground beef made its secret blend of prime Angus beef. Its bar features lots of craft beers on tap and in bottles.

Martin and Essa founded Hops at 2419 Spring Garden St., Greensboro, in 2013. A second Greensboro location opened at 2138-A Lawndale Drive in 2017. Hops later opened a location in Chapel Hill, but it closed this year after just 15 months. “We loved Chapel Hill, but in the end it just didn’t meet our brand standards, and it was a little too far away (from Greensboro),” Martin said.

“TripAdvisor really put us on the map in Greensboro,” Martin said.

Just this month, Money.com put Hops at No. 18 in a list of the 20 Best Burger Spots in the U.S., based on Yelp.com reviews.

The new location has 3,150 square feet, 75 seats inside and 24 on the patio. It’s actually slightly larger than the two Greensboro locations, especially in its kitchen.

Parking directly in front of Hops is limited, at six spots, but restaurant customers have access to several adjacent lots, just a few yards away on Northwest, which are marked with Hops signs.

Martin and Essa are former high-school friends who have been business partners for about 20 years. “Our first business together was the University General Store (later Firehouse, near the campus of the University of North Carolina at Greensboro),” he said.

Later, they had a pizzeria where the original Hops now sits on Spring Garden Street. After five years, it was doing “marginal” business, Martin said. “One day we just decided to try burgers. And instead of serving them with milkshakes, we decided to do craft beer.”

The heart of Hops' menu consists of 10 signature burgers. The Spicy Goat has goat cheese, bacon, pepper jelly and lettuce. The Hibachi has grilled shrimp, fried rice, vegetables, white sauce and crispy wontons. The Brooklyn has corned beef, Swiss cheese, sauerkraut, cherry peppers and Russian dressing. Customers also can create their own burger from a wide variety of toppings.

Burgers run from $7.75 to $13.50, depending on the variety and amount of beef. Customers can choose 6, 8 or 12 ounces of beef. They also can substitute turkey, chicken, bison, tuna or two kinds of veggie patties. Buns include a gluten-free option, as well as pretzel roll, sriracha bun, brioche and more. Burger prices include a choice of one side, such as regular or sweet-potato fries, potato or zucchini-carrot chips, onion rings, vegetables or side salads.

Hops also has sandwiches ($8.75 to $12.50) made with crab cakes, tuna, haddock, chicken and avocado. The four salads include Chicken Salad ($7.75) with walnuts, Parmesan and cranberries and Tuna Steak Salad ($12.50) with mango relish, mandarin orange, wasabi aioli and wontons with soy-ginger vinaigrette.

Every week, Hops has a featured burger of the week — the same burger each week at all locations. This week, it’s a Roasted Rib Burger topped with prime rib, greens, bacon vinaigrette, fried asparagus straws and horseradish and shallot cream-cheese spread on a toasted brioche bun. It comes with a side of smoked-salmon stuffed avocados.

There also is a dessert of the day.

The bar has 16 beer taps: five devoted to regulars and 11 that rotate. The list always includes plenty of local or regional beers, including ones from Burial Beer Co., Foothills Brewing and Old Hickory Brewery. There also are craft brews from around the country. The restaurant also serves wine and liquor.

Essa is in charge of recipe development and execution in the kitchen while Martin is in charge of the front of the house and administration. He credits their success to "keeping at it, seven days a week" and to having great employees.

Martin said they have fond memories of the West End and Hanes Park area from their high school days in the 1980s when he and Essa played tennis for Grimsley High School. “We knew this area. We always had fun when we came to Reynolds (High School) and Hanes Park every year for the conference championships,” Martin said.

When they heard that Carmine’s location might be available, they jumped at the opportunity. “We love the West End,” Martin said. “The city of Winston has really welcomed us, and we’re looking forward to becoming a true member of the community.”

For years, cheesecake lovers from Winston-Salem have come back from visits to Greensboro raving about Alex Amoroso’s cheesecakes. Now, they do…

Hops Burger Bar at the corner of Northwest Boulevard and Reynolda Road.

A full house at Hops Burger Bar at the corner of Northwest Blvd and Reynolda Road.