It may be a quiet Fourth of July this year, but we can still celebrate through food
0 comments
Share this
{{featured_button_text}}
1 of 8 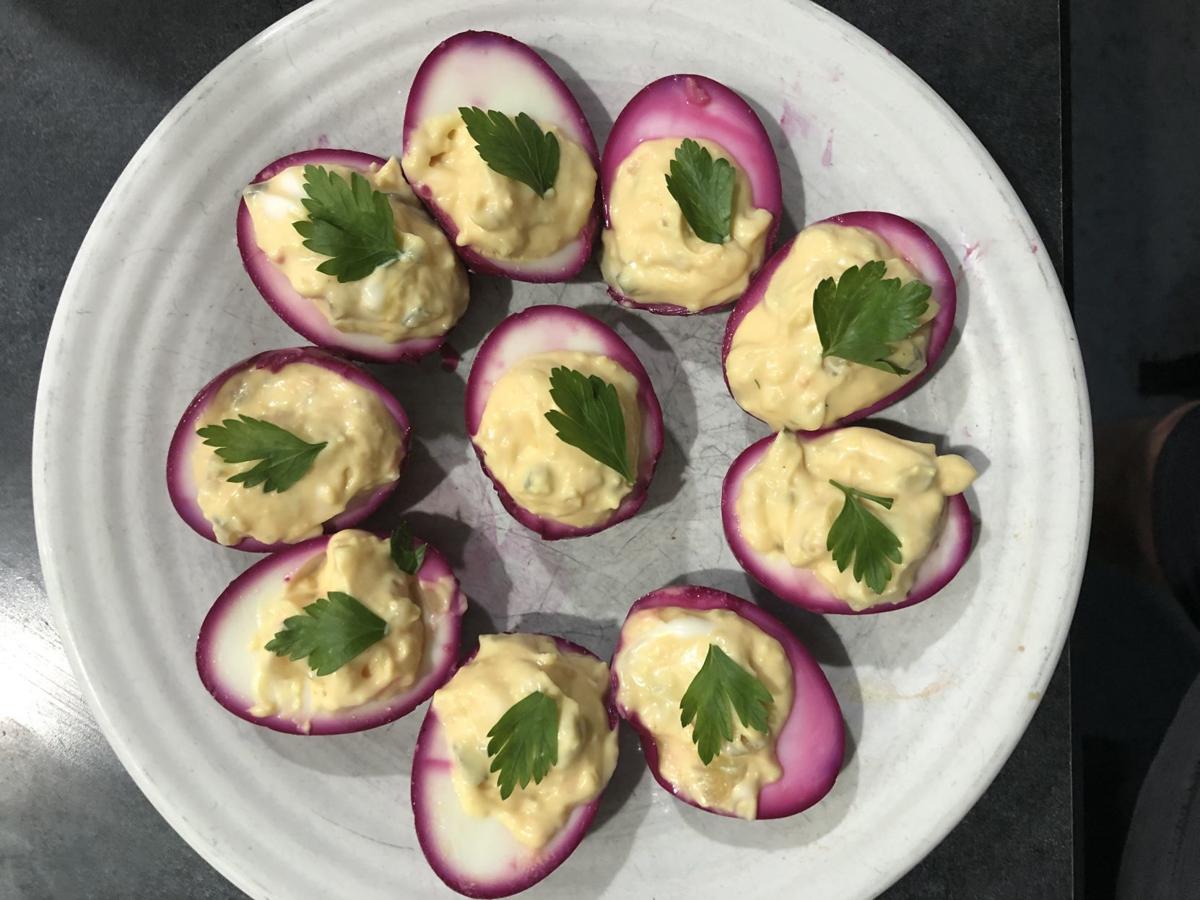 Deviled eggs made from red beet eggs, hard-cooked eggs soaked in the brine of pickled beets. 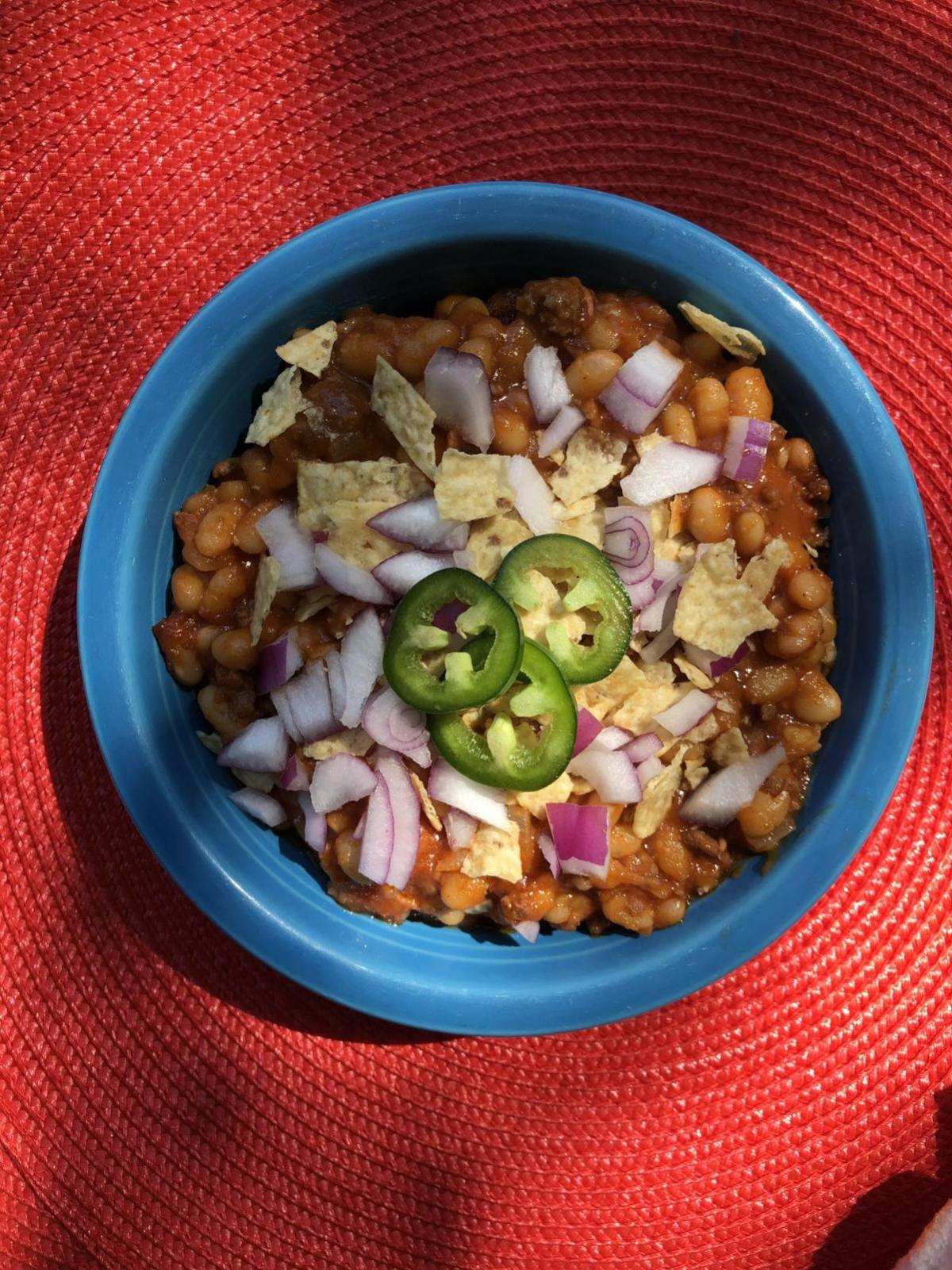 Baked beans can be garnished like chili, with such toppings as jalapeno slices, diced red onion and crushed tortilla chips. 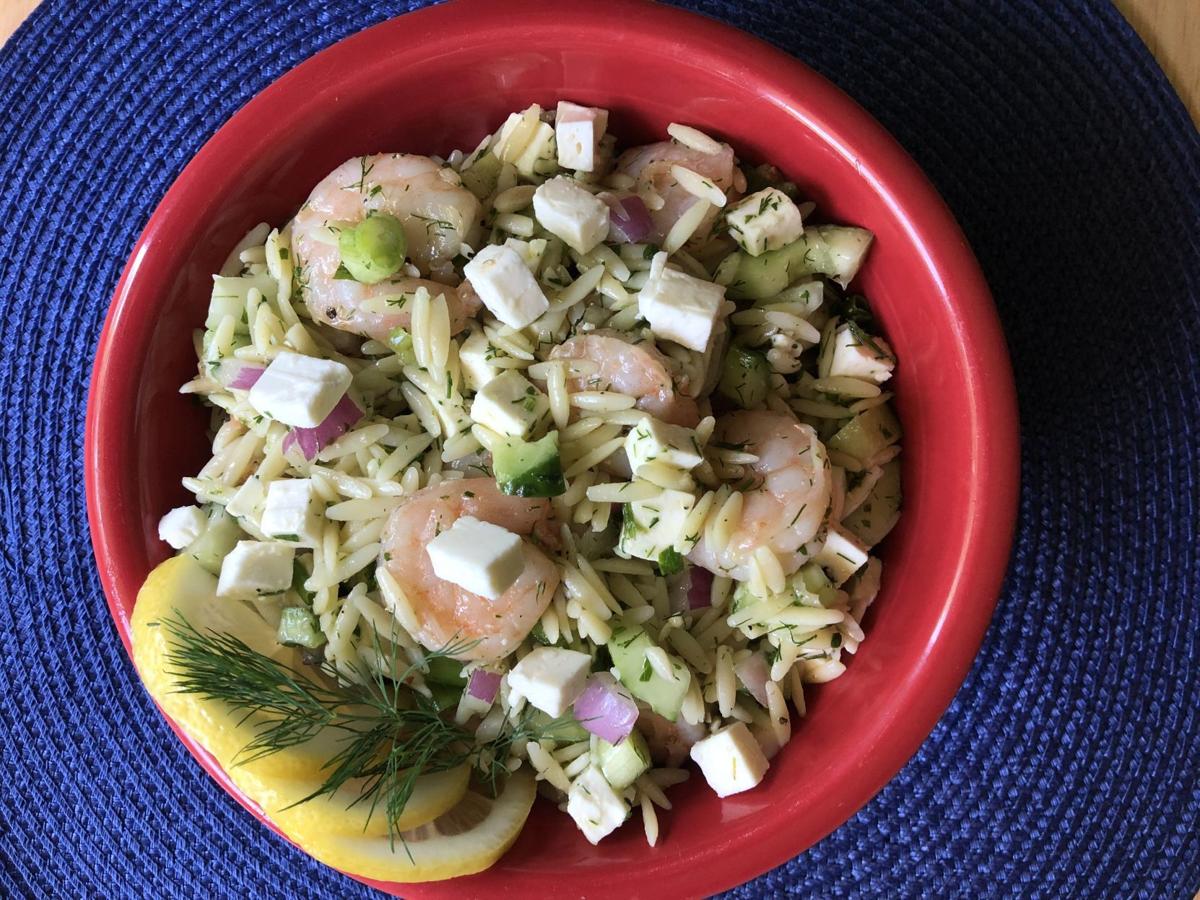 Roasted shrimp and orzo, with feta, cucumber and dill 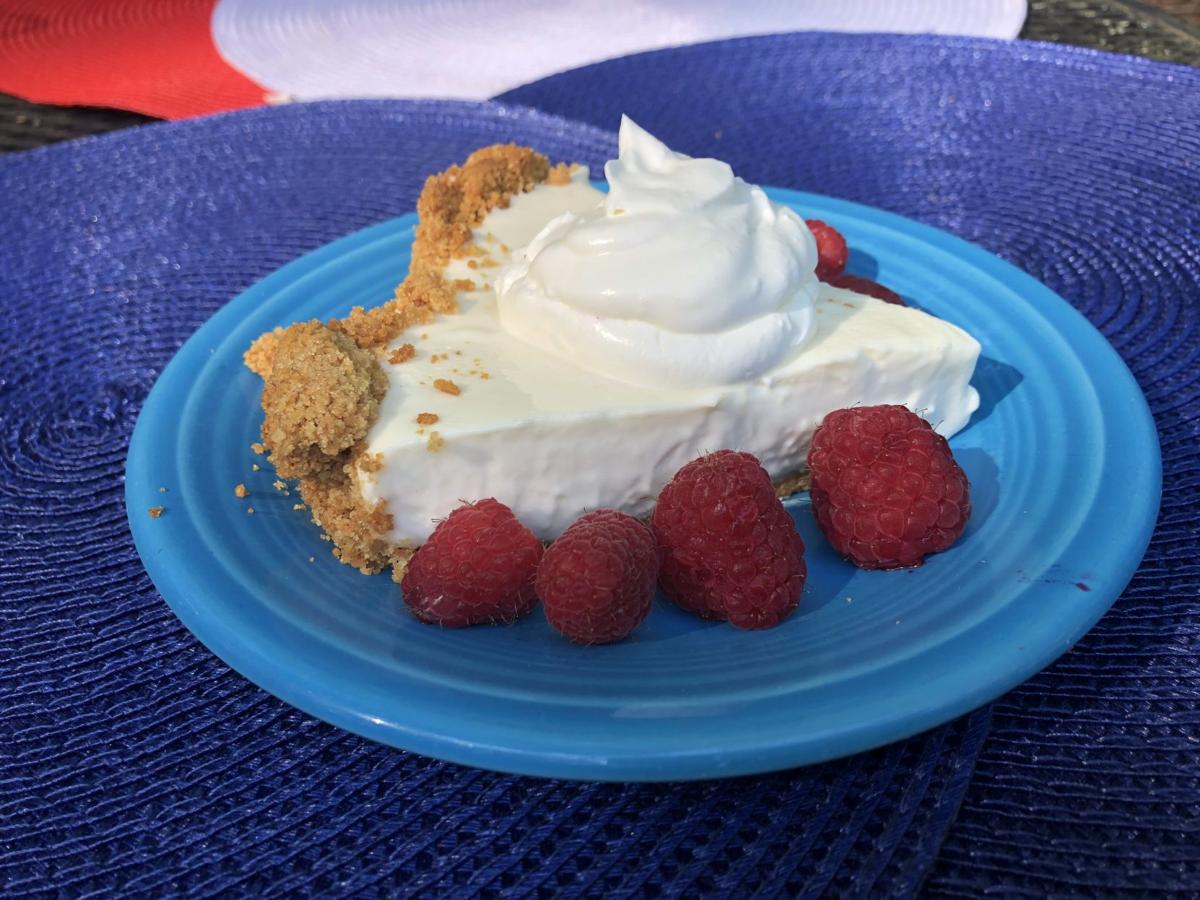 Icebox pie, with a graham-cracker crust, topped with whipped cream and garnished with raspberries. 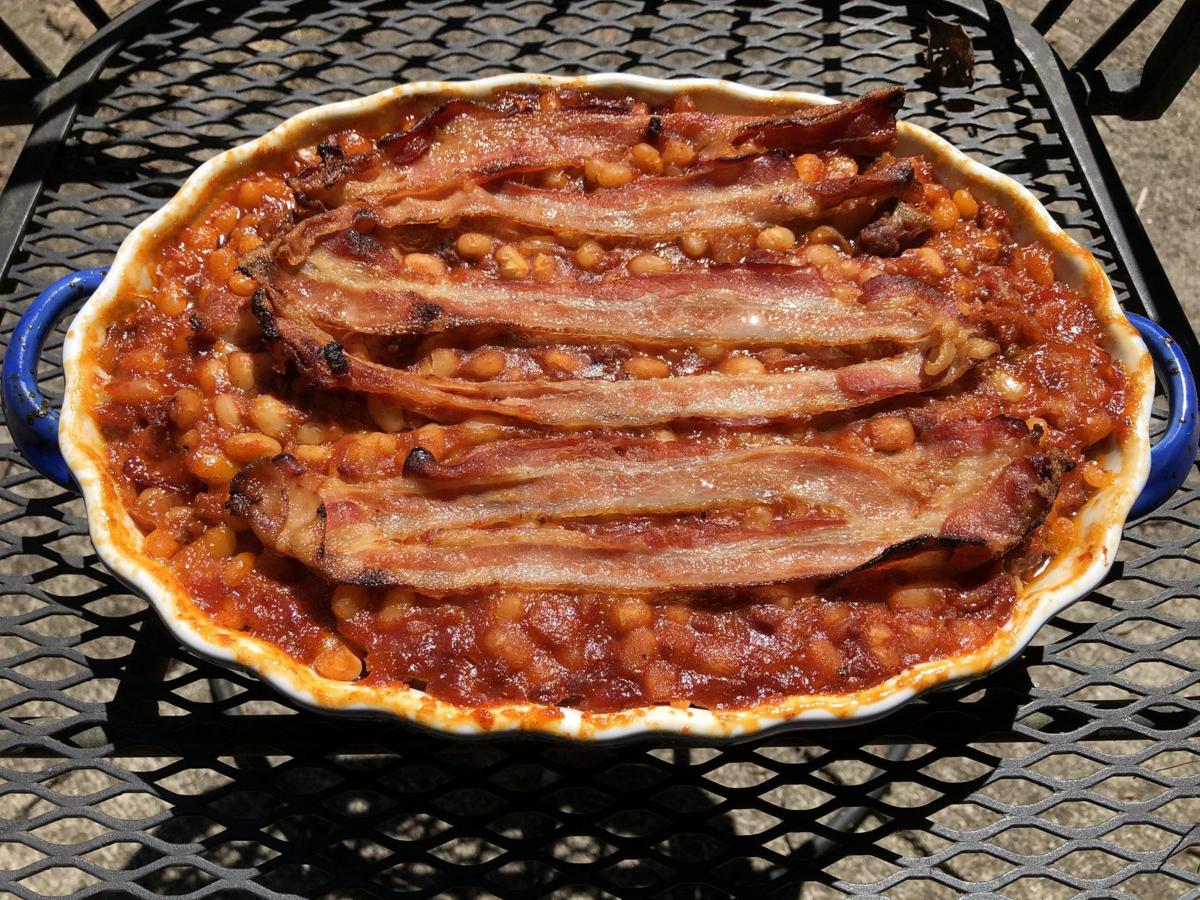 These baked beans can be a meal unto themselves. They are made with ground beef and bacon - both mixed in with the beans and cooked on top. Deviled eggs made from red beet eggs, hard-cooked eggs soaked in the brine of pickled beets. 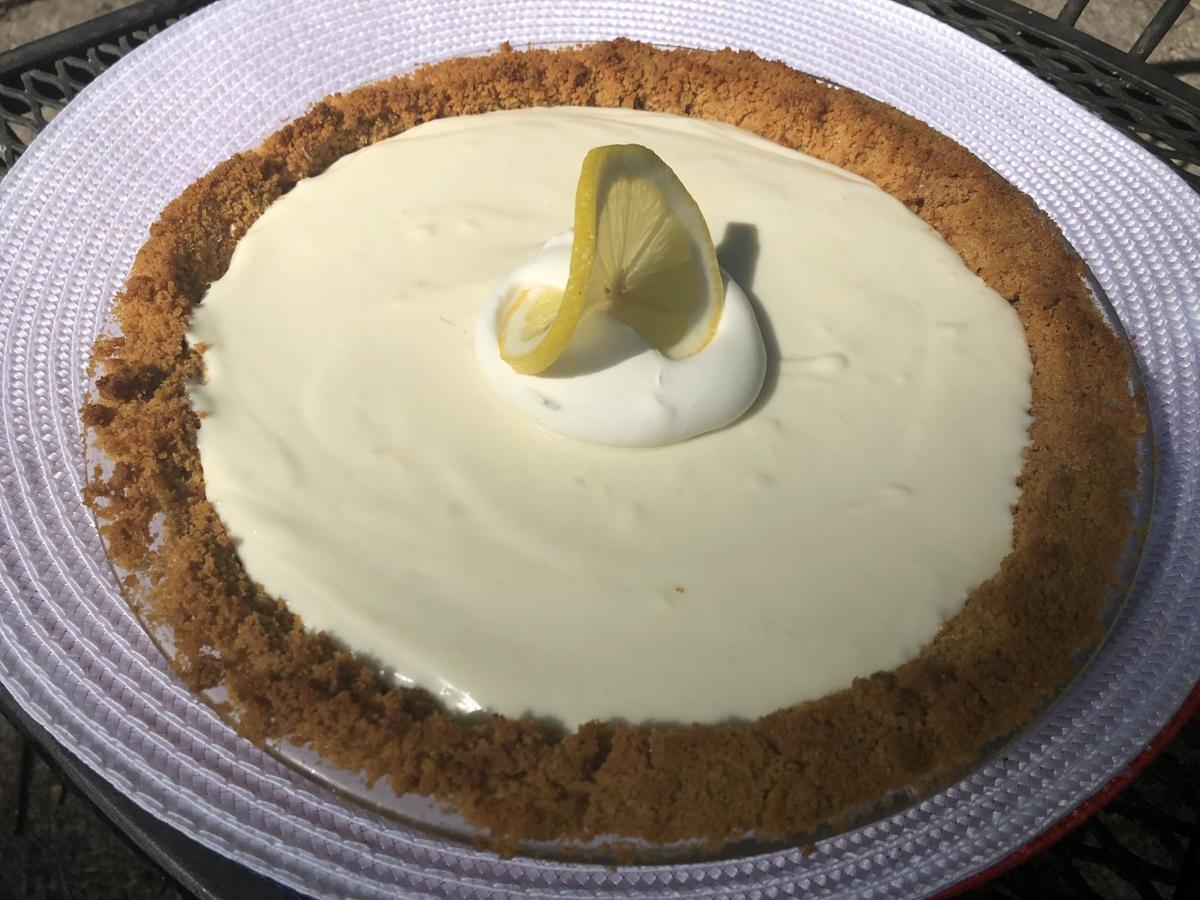 Icebox pie is a no-bake recipe made with a graham-cracker crust and a filling of cream cheese, sweetened condensed milk and freshly squeezed lemon juice. 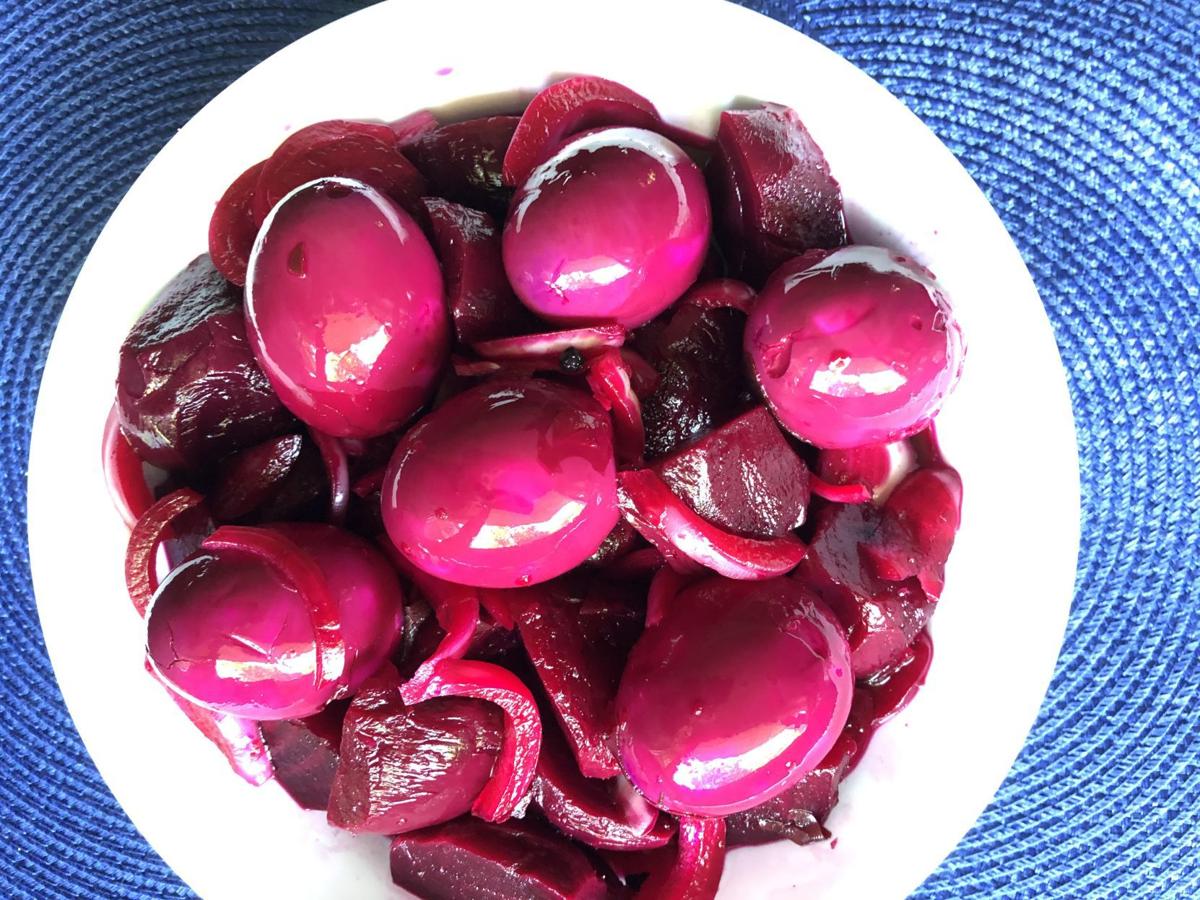 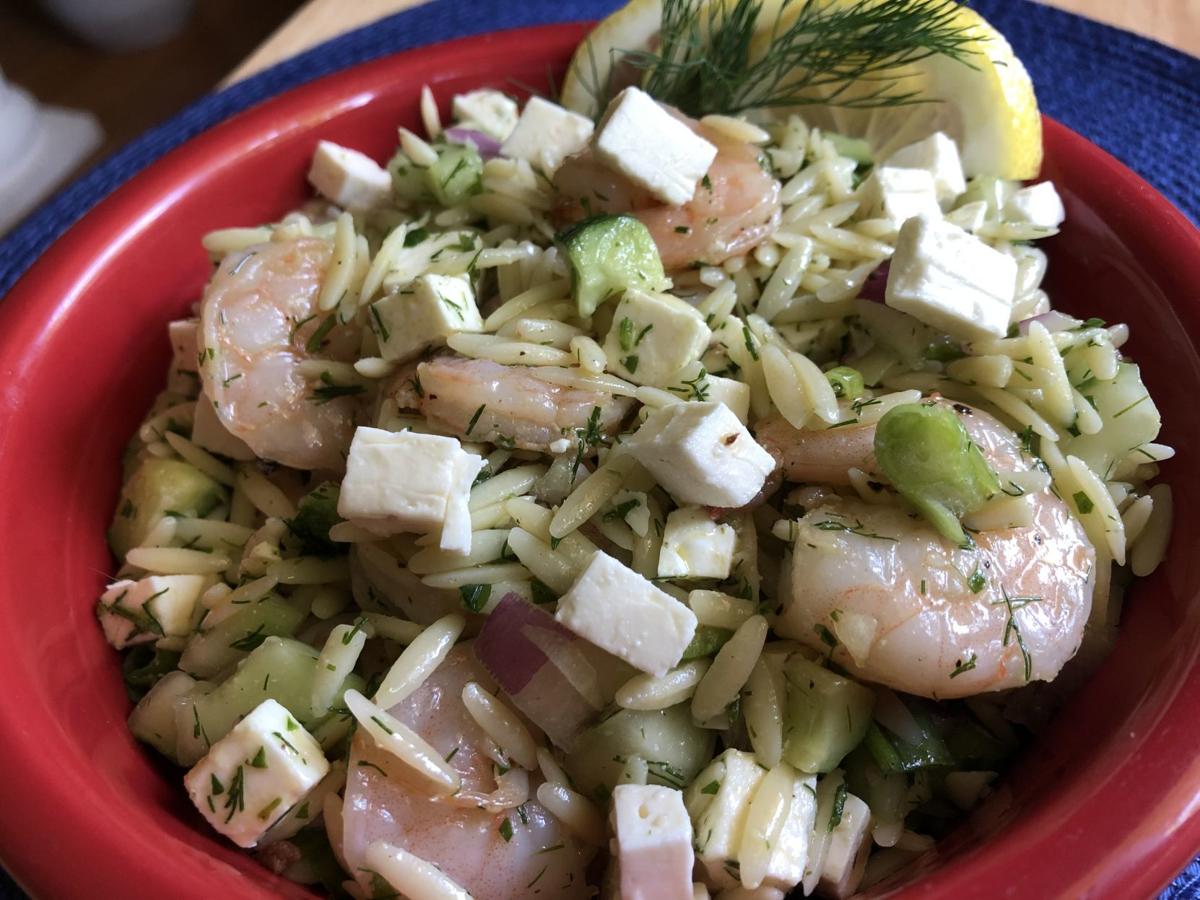 Roasted shrimp and orzo, with feta, cucumber and dill.

This Independence Day, many Americans will be feeling less independent than usual, as the COVID-19 pandemic has impinged on some of our freedoms.

And though we may not be celebrating with all the friends and family we normally would see on this holiday, we can still celebrate with food.

Readers queried on my Facebook page shared some of the ways they plan to celebrate the Fourth of July.

Mary Lacklen of Greensboro, the former chef and owner of Bert’s Seafood, shared her mother’s recipe for red beet eggs.

Her mother passed away just last week at age 93, and that perhaps had Lacklen in a nostalgic mood. Her family comes from Amish country around Lancaster, Pa. Red beet eggs, Lacklen said, was a staple of her childhood. “In Lancaster, there were a lot of Amish farms, and my father kept horses there. He raised horses for harness raising. We used to go to the Amish farms on Sundays, and you had to bring something — a bowl of red beet eggs was a standard thing to bring. It was always a winner.”

Red beet eggs start with pickled beets. “We always had red beets in the refrigerator. It was kind of a staple. We would have the beets, and we would just pop the eggs in there and wait a little bit.”

It doesn’t take long for outer layer of the hard-cooked eggs to turn purple. “They’re kind of cool because they turn color. And they make beautiful deviled eggs,” Lacklen said.

The only trick to making these is to be sure not to leave the eggs in the pickling juice for more than a few hours or else the whites start to turn rubbery.

Lacklen said she probably would have a potluck for friends this weekend if it was a normal year. “I love potlucks. Everybody brings their favorite dish, and they have such pride in it.”

Small gatherings are possible this weekend, with precautions. Consider an outdoor picnic where each family can keep to their own picnic table or blanket 6 or more feet apart from one another.

Jennifer Rotenizer, a former Journal photographer, shared a light picnic dish that can work as a side or main dish. The recipe, from Food Network host Ina Garten, is for a Mediterranean-inspired pasta salad with shrimp, cucumber, dill and feta cheese. The salad uses orzo, or rice-shaped pasta, and is tossed in a lemon vinaigrette.

For someone looking for something hot, meaty and more substantial, Cathy Hollinger Schaeffer of Arcadia offered a recipe for baked beans she has been using for more than 30 years — out of a cookbook she got as a wedding present in 1986.

“There is a church there in Amish country called German Baptist Brethren, and when I got married a beloved coworker gave me their church cookbook,” she said. “Now it’s all worn with splatters,” she said.

Schaeffer often uses a combination of beans — often a couple cans of baked beans plus a couple cans of plain beans — in this recipe, along with plenty of bacon and ground beef. It’s enough to make a meal out of it. In fact, her family eats it as a main dish in a bowl just as she does with chili, even loading on just garnishes as sour cream, sliced jalapeno, avocado, red onion, shredded Cheddar and crushed tortilla chips.

Schaeffer that her usual July Fourth celebration is a big clambake for about 20 friends and family members. This year, it will be just for family, but she still plans to serve the same menu as long as she can get fresh clams. In addition to clams and baked beans, she also likes to serve German potato salad. “That’s another one that uses a lot of bacon and vinegar,” she said with a laugh.

For a cool, refreshing dessert, local realtor Jayne Russell suggested icebox pie, a sweet that she has loved since she was a little girl growing up in Morganton. “My mom would take me to the five and dime, and I would always order that,” she said.

By the time she was a teenager, she had learned how to make it herself.

“In college, it was something I could make in the dorm because you didn’t need an oven,” she said.

Russell said that her lemon icebox pie is similar to Key lime pie, and that there are several different ways of making it.

Hers is a no-bake version. So instead of using egg yolks that must cook to allow the pie filling to set, her pie uses cream cheese beaten with lemon juice and sweetened condensed milk. Once chilled, the cream cheese holds the pie to together, creating a soft and silky texture.

The pie features a graham-cracker crust, either homemade or store-bought. It also has a whipped topping. This can be either a nondairy version, such as Cool Whip, or real whipped cream. And it can be spread in a layer over the entire pie, or added a dollop at a time to each slice. Russell recommends Cool Whip if you have to make the pie ahead of time to take to an outdoor picnic. Whipped cream is rich and tasty, but is best added just before serving.

These are just a few of the more than a dozen summer recipes that readers recently shared. Thanks to everyone who sent in a recipe. Look for more recipes to appear in my weekly Recipe Swap columns.

1. In an electric mixer, beat the cream cheese for one minute. Add condensed milk and lemon juice and continue to beat until smooth, about 5 minutes. Pour the filling into the crust and refrigerate 3 to 4 hours until set.

2. When about ready to serve, top with whipped cream or whipped topping. If desired, garnish with fresh berries.

Heat oven to 350 degrees. Combine all ingredients in a bowl until mixed well. Use your hands to press into an even layer in the bottom and sides a 9-inch pie pan. If desired, use the bottom of a glass or measuring cup to press crust evenly.

Bake crust 7 to 10 minutes. Let cool before filling for a no-bake, chilled dessert.

Note: If desired, reserve a few whole slices of bacon and lay them out in a single layer on top of the beans before baking.

1. Heat oven to 400 degrees. Wrap beets individually in foil and bake at 400 degrees until a knife easily pierces the beets (like a cooked potato), about 1 hour. Do not overcook! Remove from oven and allow to cool.

2. Combine the cider vinegar, sugar, salt, bay leaves and peppercorn in a pan. Cook over medium heat until sugar dissolves. Set aside to cool.

3. Peel beets and cut them in quarters. Slice the Vidalia onion into thin slices and add them into a bowl with the beets and cover with the brine. Cover and refrigerate. (This can be done a few days ahead.)

4. Add as many hard-cooked eggs as will fit, submerged, in the pickling brine, refrigerated, until the outsides are dyed purple, about 2 to 4 hours. (You may have to remove a few beets to make room for the eggs.) Do not soak the eggs too long or they will become rubbery. Remove eggs promptly. Beets can remain in pickling liquid in covered container in the refrigerator for two to three weeks.

Serve the beets and eggs together, or use the eggs to make purple deviled eggs.

1. Preheat the oven to 400 degrees. Fill a large pot with water, add 1 tablespoon of salt and a splash of oil, and bring the water to a boil. Add the orzo and simmer for 9 to 11 minutes, stirring occasionally, until it's cooked al dente. Drain and pour into a large bowl. Whisk together the lemon juice, ½ cup olive oil, 2 teaspoons salt and 1 teaspoon of pepper. Pour over the hot pasta and stir well.

2. Meanwhile, place the shrimp on a sheet pan, drizzle with olive oil, and sprinkle with salt and pepper. Toss to combine and spread out in a single layer. Roast for 5 to 6 minutes, until the shrimp are cooked through. Don't overcook.

3. Add the shrimp to the orzo and then add the scallions, ¼ dill, parsley, cucumber and onion. Toss well. Taste and add more dill, parsley and lemon juice, plus salt and pepper, as needed. Add the feta and stir gently. Set aside at room temperature for 1 hour to allow the flavors to blend, or refrigerate overnight. If refrigerated, taste again for seasonings and bring back to room temperature before serving.

Deviled eggs made from red beet eggs, hard-cooked eggs soaked in the brine of pickled beets.

Baked beans can be garnished like chili, with such toppings as jalapeno slices, diced red onion and crushed tortilla chips.

Roasted shrimp and orzo, with feta, cucumber and dill

Icebox pie, with a graham-cracker crust, topped with whipped cream and garnished with raspberries.

These baked beans can be a meal unto themselves. They are made with ground beef and bacon - both mixed in with the beans and cooked on top. Deviled eggs made from red beet eggs, hard-cooked eggs soaked in the brine of pickled beets.

Icebox pie is a no-bake recipe made with a graham-cracker crust and a filling of cream cheese, sweetened condensed milk and freshly squeezed lemon juice.

Roasted shrimp and orzo, with feta, cucumber and dill.