Virus cases reach 7 million in US amid spike in heartland, home to anti-mask sentiments

Italian restaurant is gaining a reputation for its vegan, gluten-free options
2 comments
Share this
Return to homepage × 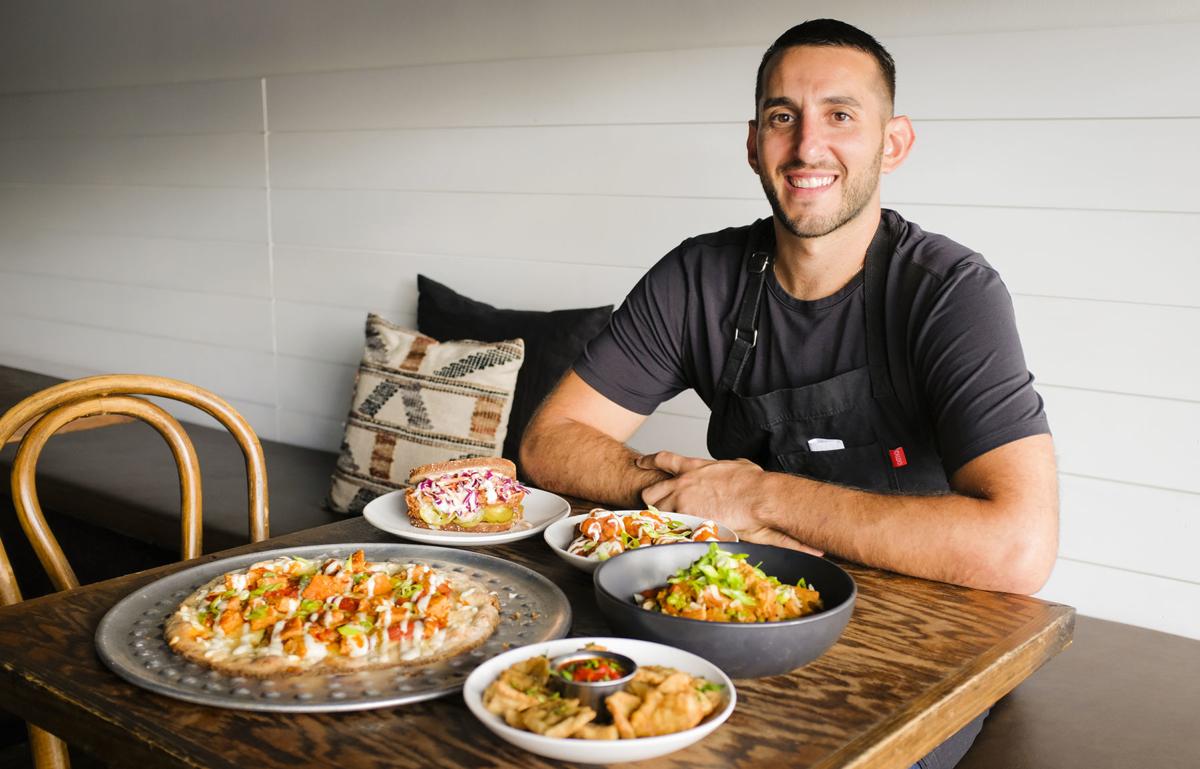 Brian Ricciardi, owner of Mozzarella Fellas, poses for a portrait with a selection of dishes in his dining room. 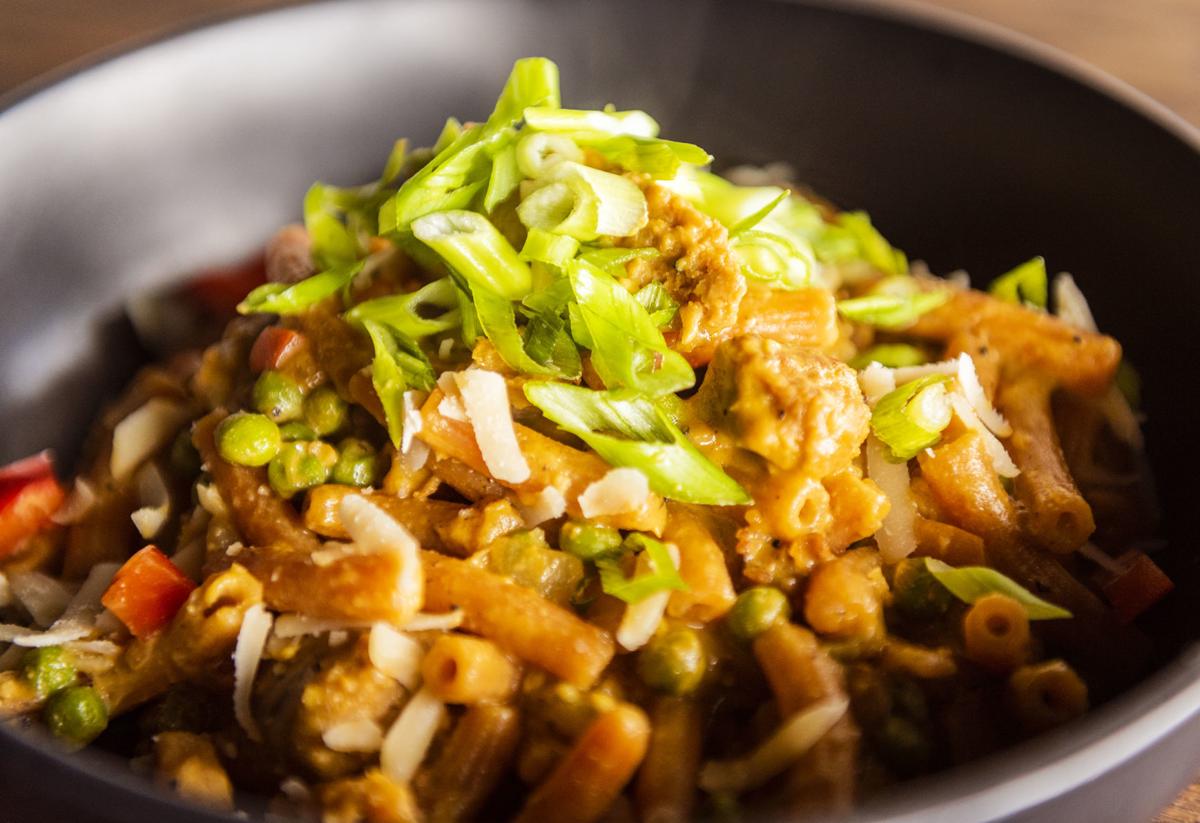 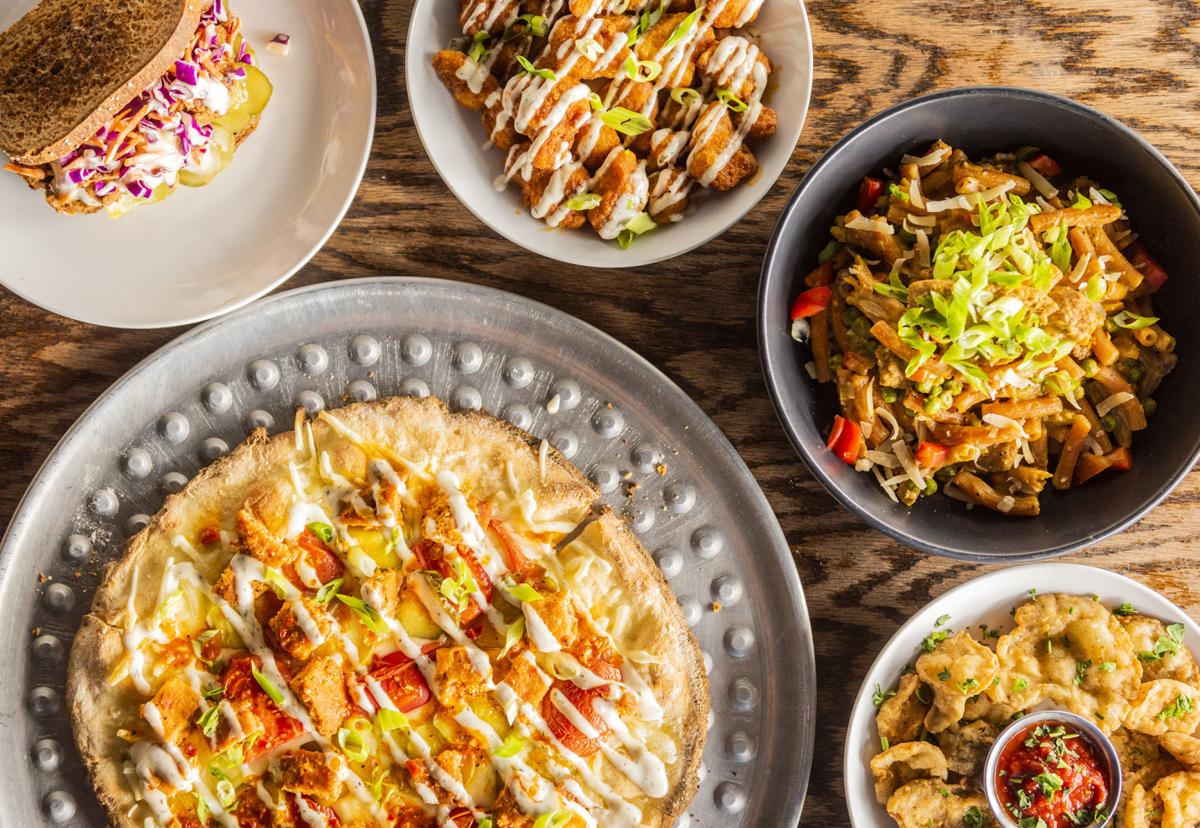 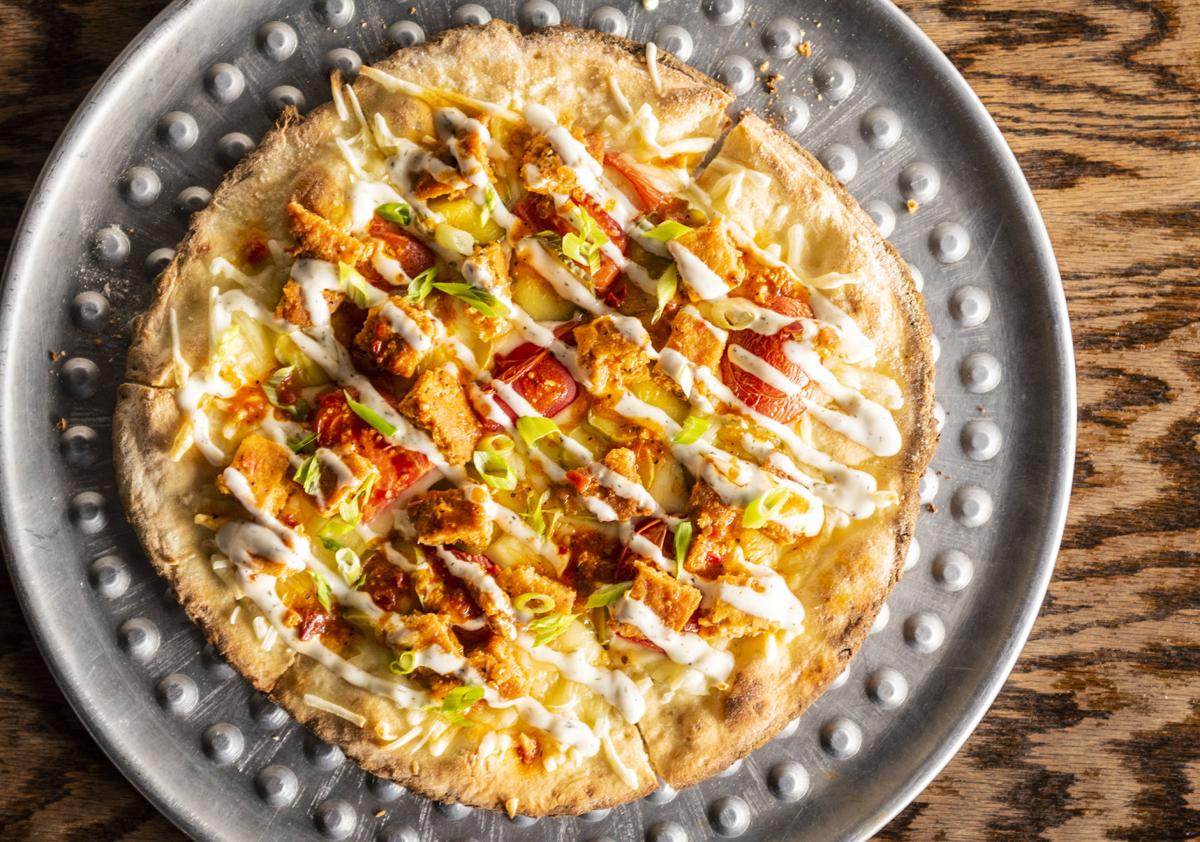 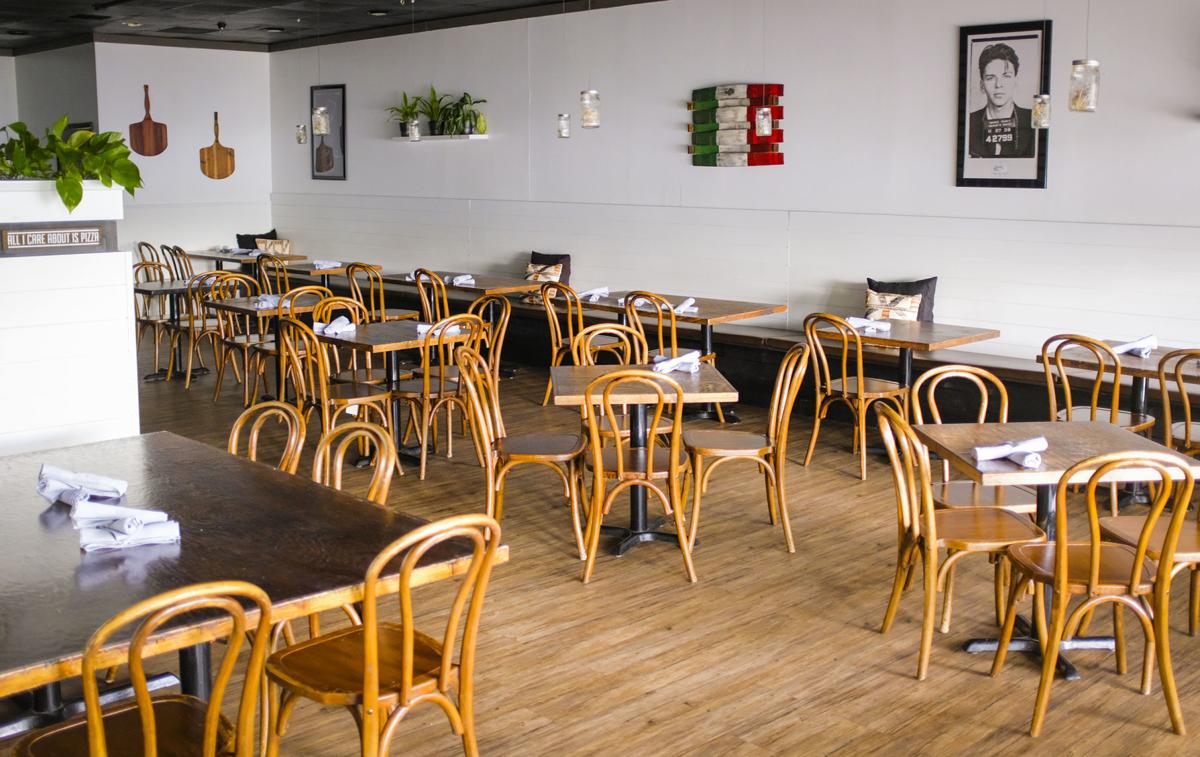 The dining room at Mozzarella Fellas

But that’s just the case with Brian Ricciardi, the owner of Mozzarella Fellas, 336 Summit Square Blvd.

Ricciardi is a vegan — a vegetarian who also eats no eggs, cheese, butter or milk or other animal by-products.

Not only that, but Ricciardi also eats gluten-free much of the time because his girlfriend has celiac disease, a hypersensitivity to the gluten in wheat, barley and rye.

As a result, Ricciardi has crafted a menu at Mozzarella Fellas that gives diners a lot of options.

Yes, customers can get a traditional New York-style pizza with regular from-scratch wheat dough, house-made mozzarella and pepperoni and sausage.

But they also can get that pizza with gluten-free dough (cauliflower or rice-flour blend), vegan cheese and vegan sausage. “This is kind of me, and where I’ve come,” Ricciardi said. “This is how I eat.”

Mozzarella Fellas menu is predominantly Italian, and much more than pizza, but to a certain extent is very personalized, based on Ricciardi’s tastes. It has spaghetti and meatballs, for example, but not lasagna or eggplant Parmesan. And avocado toast and fried cauliflower are nestled among the Italian antipasti.

And then there are all the vegan dishes.

“One of the biggest obstacles has been getting (vegan substitutes) that I would actually want to eat,” Ricciardi said. “But where they’ve come in the last few years, it’s remarkable. Now some of these are really close,” he said.

A vegan chicken Parmesan sandwich is made with a Hungry Planet soy-based chicken. And it can be made on Simple Kneads gluten-free bread.

A vegan version of Philly cheesesteak is made with jackfruit, as is a vegan BBQ sandwich — one of several menu items reflecting Ricciardi’s love of Southern food. “I like mixing Italian and Southern,” he said. “I think they are similar in a lot of ways.”

All the pasta dishes are available with red lentil pasta as well as regular wheat pasta. Violife vegan cheese, with a potato-starch and rice-starch base, gets used on vegan pastas and other dishes.

All told, at least a third of the menu is vegan, including about a half-dozen specialty pizzas, sandwiches, salads and pastas.

Popular vegan appetizers include the fried cauliflower and oyster mushroom “calamari” with local mushrooms from Borrowed Land Farm in Pinnacle standing in for squid.

All those dishes are listed alongside fare loaded with the usual meat, cheese and wheat: Bolognese sauce, charcuterie, pork chops, mac and cheese and more. Ricciardi goes through about 120 pounds of his house-made mozzarella, and most of that ends up in his from-scratch mozzarella sticks.

In other words, Mozzarella Fellas has something for just about every dietary restriction or desire.

Ricciardi is an Italian-American who was raised in New York by his Italian grandmother. That’s where he learned to love food and the sense of community that flows from it. After moving to North Carolina in 2004 to be near other family members, he went to work for Mario’s Pizza, learning the ins and out of not only New York-style pizza but also the restaurant business. It was there that he met Darrell Coltrane, and together they eventually took over the former Francesco’s Italian Restaurant and opened Mozzarella Fellas in 2016. Ricciardi bought out Coltrane last year.

Mozzarella Fellas is tucked into North Summit Square shopping center, off University Parkway on the north side of town. It’s not the most high-profile of locations, but Mozzarella Fellas has gradually earned a reputation for its pizza. But it also quietly has become a friendly place for vegans and gluten-free diners.

Ricciardi doesn’t actually recommend his restaurant to anyone with celiac disease. “When you come in here, flour gets everywhere. That’s just the way it is,” he said.

Ricciardi is 31 and in good health. But he said he became vegan in 2015 for health reasons. “I was starting to see friends from high school get cancer, and other people in my family, too,” he said. “I thought maybe this wouldn’t be a cure-all, but maybe it would help.”

Since then, he has gone down a few rabbit holes of vegan research and become even more convinced of its benefits.

“When you’re a vegan, you start really paying attention and caring a lot more about what you eat,” he said.

Being a vegan — and a vegan chef and restaurateur — hasn’t been easy. “You get a ton of grief,” he said. “Now it’s a little better, but three and a half years ago I didn’t even like to say that word ‘vegan.’ People look at you like you’re a weirdo.”

Though he has begun to get positive feedback from customers, he can’t help but think most of Winston-Salem doesn’t know what he’s doing — or even that he exists.

“I don’t have money for advertising, and I’m not that good with social media. I’m like the oldest 31-year-old in the world,” he said. “And it’s not like I’m downtown. I’m kind of off the beaten path.

“But after three and a half years, we’ve gained a reputation. You know, we have these comment cards that we give with the checks, and a lot of people fill them out. And a lot of people say they’re really happy that we offer something for everyone in the family.”

Brian Ricciardi, owner of Mozzarella Fellas, poses for a portrait with a selection of dishes in his dining room.

The dining room at Mozzarella Fellas