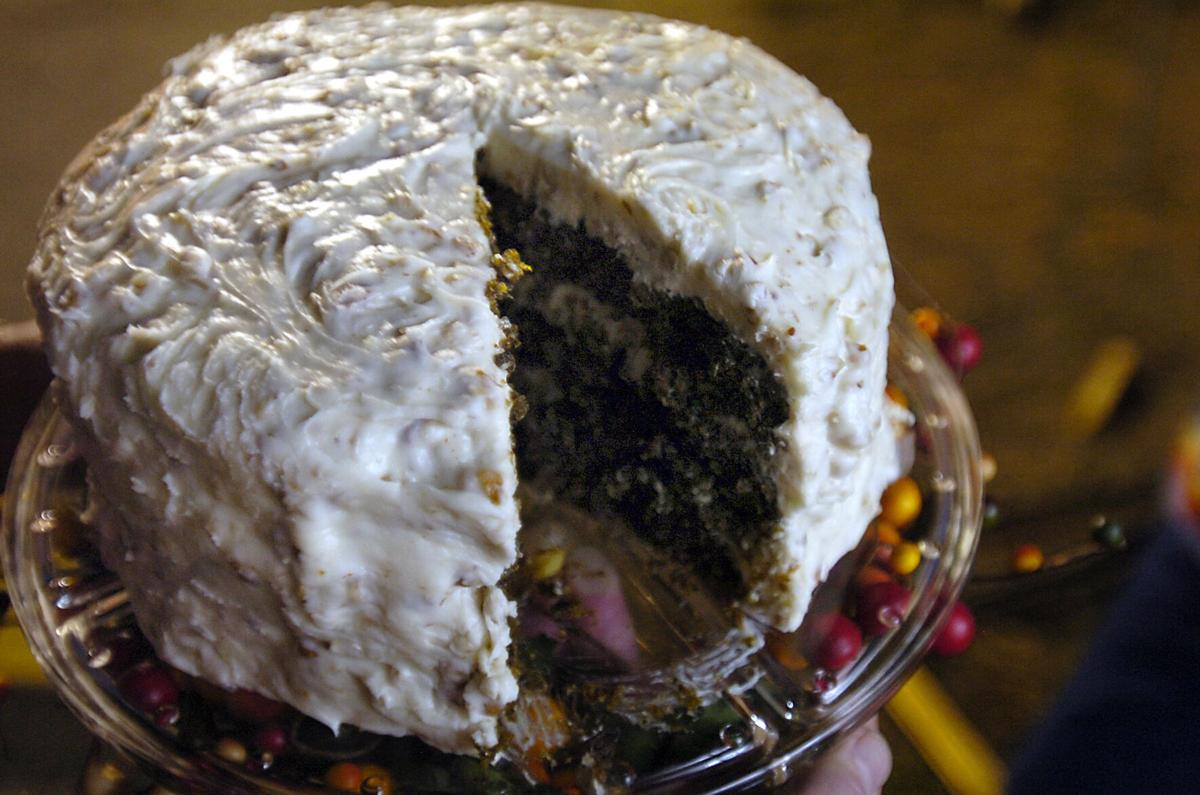 Dinah Reece's collard-greens cake at the Dixie Classic Fair. Reece described her cake "like a cross between an apple cake and a carrot cake," she said. 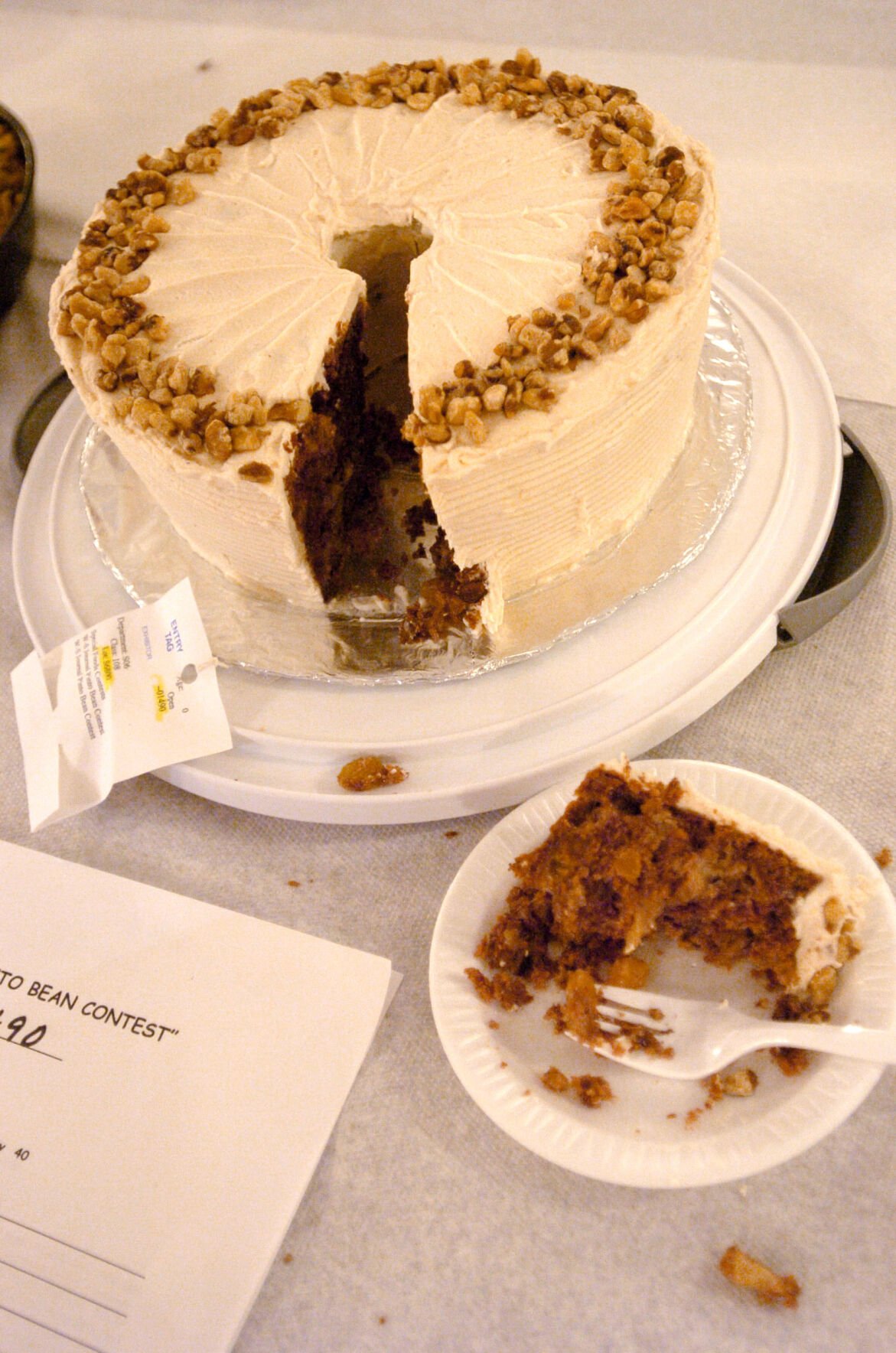 One of the fun things about the fair contests was the suspense in waiting to learn what kind of dish contestants would enter.

The surprises were sometimes surprisingly good and occasionally surprisingly bad, but some of the best were simply the ones that no one anticipated.

This often occurred when contest sponsors thought they were crafting a certain kind of contest, only to find that contestants had discovered and exploited a loophole in the rules.

Some prime examples that stand out for me are when sponsors — including the Winston-Salem Journal — thought they had designed a savory contest, only to find dessert entries show up and — when the fine print was examined — found to be perfectly in line with the rules in the fair handbook.

In the collards contest, two of the 19 entries were cakes, and Dinah Reece’s collard greens cake took first place.

“Sweets are what I do best,” Reece told me that year, adding that no matter what the contest, if she can figure out a way to enter a dessert, she will.

Reece described her cake "like a cross between an apple cake and a carrot cake," she said. Coming up with the recipe was really as simple as substituting finely chopped cooked collards for the carrots and some of the apples.

The cake is flavored with cinnamon and nutmeg, and studded with raisins and chopped pecans.

People who weren’t given a hint would be hard-pressed to identify collards in the dark-colored cake.

In the pintos contest, Mattie Fowler took first place with a pound cake. That contest drew six cakes, three pies, two plates of fudge in addition to a slew of such savory dishes as lasagna and enchiladas, chili and soup.

The pintos, it turned out, helped make a fairly moist pound cake. Fowler simply mashed some beans into a standard pound-cake batter. But she also had a little fun with the frosting. "People think it's a cream-cheese frosting, but it actually has pinto-bean juice in it," she said at the time. "I thought that was pretty neat,” she said with a laugh that had perhaps a touch of mischievousness to it.

That kind of fun characterized a lot of food contests at the fair. Judging those contests could be a real hit-or-miss proposition. I know it often looks like food judges are having a good old time, but even when it looked that way, our guts were hard at work — and often suffering from our dedication to the cause.

But the delight in never knowing what I might taste at a contest always kept me coming back.

2. Beat sugar and ¾ cup oil in electric mixer until well combined. Add 2 of the eggs and the vanilla; mix well. In a blender, put remaining ¼ cup oil, remaining 2 eggs and all of the collards. Blend until smooth, until tiny flecks of collards remain visible. Stir collardmixture into batter along with the apples.

4. Divide batter into the three prepared pans. Bake 20 to 25 minutes or just until done.

5. Cool the cake in the pan 10 minutes, then turn out and cool completely on a wire rack.

6. To make the frosting, beat cream cheese and butter until light and fluffy. Add powdered sugar, vanilla and pecans. Add milk, a tablespoon at a time, to reach desired frosting consistency.

7. Assemble and frost middle layers, sides and top of cake.

Note: To get the collards finely chopped, it may help to use a food processor.

4. Spoon batter into prepared pan. Bake 1 hour and 15 minutes, or until toothpick inserted in center comes out clean. Cool in pan 10 minutes, then remove from pan and cool completely.

5. To make frosting, combine confectioners' sugar, pinto-bean juice, butter, vanilla and milk and beat until smooth and creamy. Frost top and sides of cake, then garnish with the ½ cup walnuts.

Note: To soften the raisins, soak in hot water for 10 to 15 minutes to plump them, then drain before adding to apple mixture.

The Bluffs' new operator is Heritage Dining and Events, LLC, led by Sharon Pinney and Chef John Gamradt of Boone.

Change up your ham-and-cheese sandwiches with homemade waffles

Savory waffles go great with such cheeses as Swiss, Gruyere, Jarlsberg and cheddar.

Dinah Reece's collard-greens cake at the Dixie Classic Fair. Reece described her cake "like a cross between an apple cake and a carrot cake," she said. 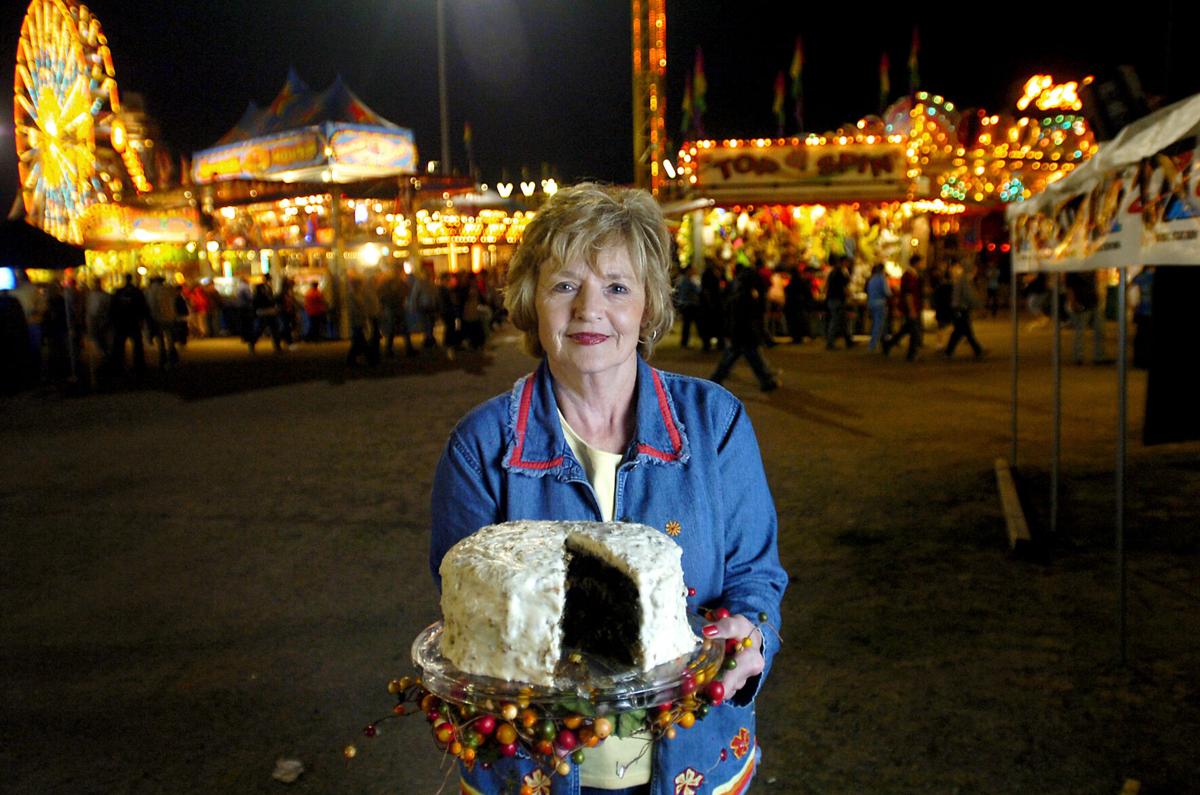 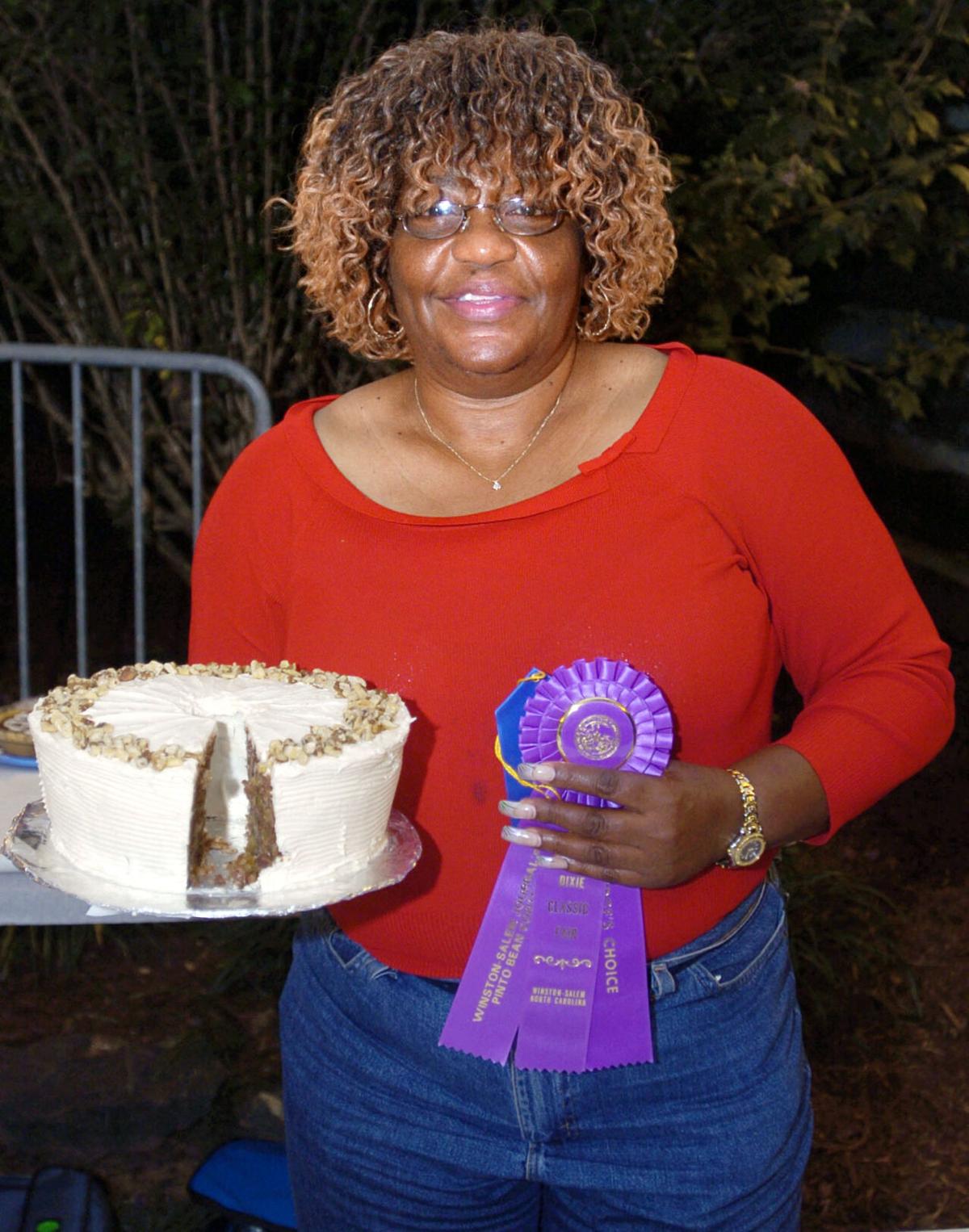 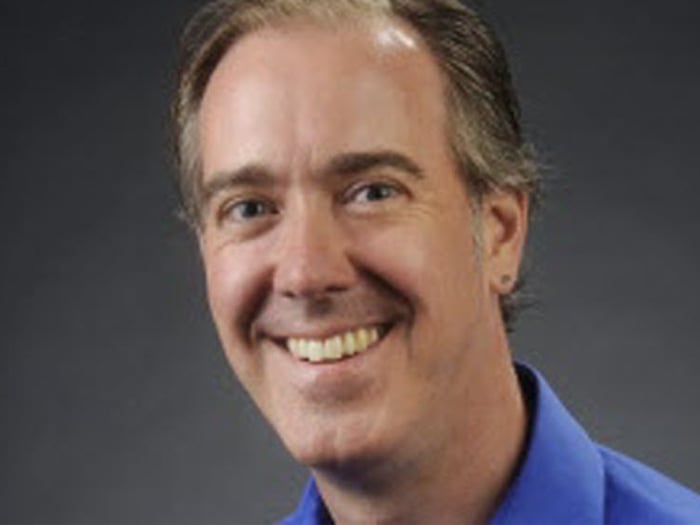