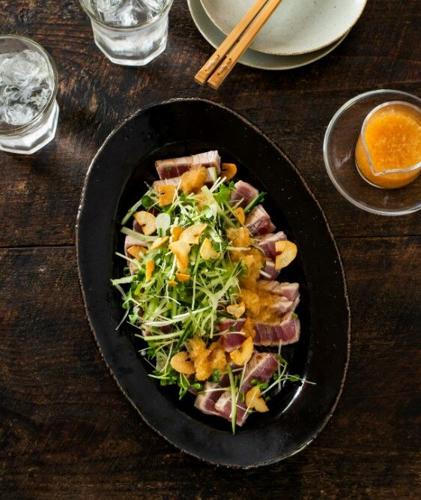 Tuna tataki, a recipe in "Tokyo Up Late' (Smith Street Books), consists of seared tuna with cucumber and a simple ginger-garlic-soy dressing. 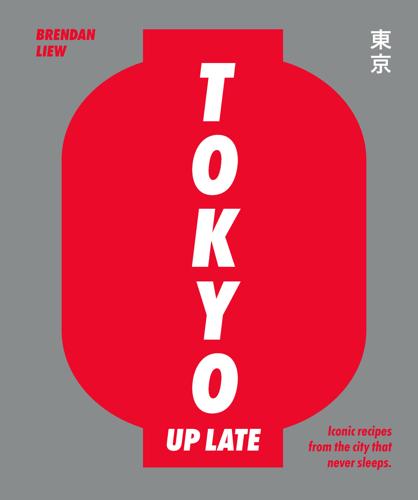 "Tokyo Up Late" (Smith Street Books) is a new book by Brendan Liew. 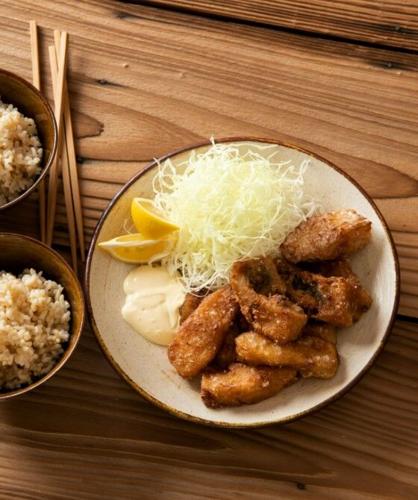 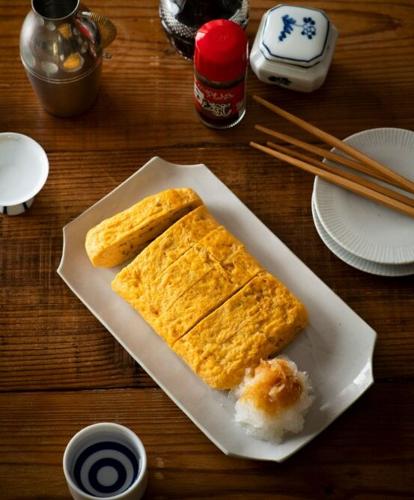 Tamago, a classic Japanese omelet, is featured in "Tokyo Up Late."

Fans of the Netflix series “Midnight Diner: Tokyo Stories” may want to check out the new cookbook by Brendan Liew.

“Tokyo Up Late” (Smith Street Books, $35) is Liew’s love letter to many great dishes found in late-night bars and diners in one of the world’s largest cities, with a population of about 39 million.

Though the book is unrelated to the Netflix show, fans of the show will understand the appeal of Liew’s topic.

These late-night spots somewhat bridge the gap between restaurants and street stands, offering comforting, nourishing simple and delicious fare to workers, partiers and others after a long day. In Tokyo, even a visit to a convenience store, Liew says, “means stepping into a world of gourmet delights.”

Many are quick, some are healthy, some are carb loaders. But all are satisfying to the nth degree.

Late-night diners in Tokyo, Liew wrote, “crave something fast and tasty, but healthy enough not to regret the next day — like a warming ochazuke (tea-based soup) of juicy salmon or cleansing sea bream, a quick bowl of natto (fermented soybeans) with handfuls of vegetables to cleanse away the excesses, or the late-night classic — instant noodles, dressed up, made nice but still ready in under 10 minutes.”

Liew is an Australian chef who has spent time at Tokyo’s Nihonryori Ryugin, which has three Michelin stars and has been rated one of the 50 best restaurants in the world. He also has run a pop-up Japanese café, Chotto, in Melbourne.

The book — subtitled “Iconic Recipes From the City That Never Sleeps” — is divided into five main parts: Izakaya, Makanai, Fast Food, Konbini and Back Home. Those are supplemented by a glossary, listing common pantry items and a handful of basic recipes.

Izakaya refers to a type of bar that serves snacks or small plates. Liew says that these particular places are “unbound by tradition,” so here you may well see non-Japanese fare. The main criteria for a menu item is whether it goes well with beer or cocktails. As a result, Liew says, “strong, salty flavors dominate.” But izakaya also are places for high-quality sashimi and crisp salads.

Makanai refers to staff meals at Japanese restaurants, usually served twice a day, before and after dinner service. Most restaurants take staff meals seriously, Liew said, and tend to focus on traditional Japanese cuisine. These meals may not use the restaurants’ most expensive ingredients, but they may well be just as good as anything the customers eat.

The Fast Food chapter covers the noodle and other food stalls found in train stations and other places that are small and fast — often run by one person, the owner — where someone can grab a meal on the run. Of course, the Japanese fast food that Liew is talking about is nothing like American fast food.

Konbini refers to a convenience store. But again, a Japanese convenience store is not quite like what we have in the United States — though there is very good food (particularly fried chicken) to be found in both.

Liew’s final chapter offers a peek at what the Japanese might cook at home after a late night. Here, he said, cooks often invoke the golden rule of Japanese cooking, mottanai, which means “don’t waste anything.”

So, as in homes around the world, late-night snacks at home in Tokyo may well consist of odds and ends of whatever leftovers lurk in the fridge.

Cooks using this book will need to stock their kitchens with such ingredients as ponzu, mirin udon, dashi, bonito flakes and other Japanese ingredients. Some are more common than others in the United States. Many of the recipes’ ingredients can be found these days in U.S. supermarkets. Others are available in specialty shops in our area.

In the end, “Tokyo Up Late” is an homage to the unfancy but essential and delicious places where Japanese go to satisify their late-night cravings.

1 bunch of micro greens, or a handful of mizuna

1. If you have a kitchen blow torch, salt the tuna, then torch it all over. If you don’t, heat a frying pan over high heat, coat the tuna in oil, then sprinkle with salt and quickly sear on all sides until each side is colored.

2. Place the tuna in the refrigerator to cool; this makes it easier to slice.

3. While the tuna is cooling, combine all the dressing ingredients and set aside.

4. In a small saucepan, combine the oil and garlic. Heat over medium heat, stirring occasionally, until the garlic is lightly golden brown. Remove the garlic, allowing it to drain and cool on paper towel. Sprinkle with a little salt.

5. Take the tuna out of the fridge. Cut into ¼-inch thick slices and arrange on a serving plate.

Mix together the shallot, spring onion, cucumber and greens. Place in the center of the plate.

Spoon the dressing over, sprinkle with the garlic chips and serve.

1. Whisk together the eggs, dashi, soy sauce, mirin and salt.

3. Heat an 8-inch pan over medium heat and add the oil. Swirl the oil around to coat the pan, then pour the oil from the pan into a small bowl and reserve.

4. Pour one-third of the egg mixture into the pan and swirl to evenly coat the pan. Using chopsticks, puncture any large air bubbles to create a mostly flat surface. When the egg mixture is mostly set (if you pick up the pan and gently swirl it, the egg doesn’t flow freely), begin rolling the egg over, starting from the side furthest away from you and rolling towards you. You should have a squarish, Swiss-roll shaped omelet.

5. Using chopsticks, dip a piece of paper towel into the oil and use that to grease the empty side of the pan. Push the omelet to the side of the pan furthest from you and grease where the omelet previously was.

6. Pour in another one-third of the egg mixture and swirl it around the pan, lifting the omelet so the raw egg runs underneath and sticks to the omelet; this also prevents the omelet getting too browned on the bottom.

7. When the egg is mostly set, repeat the rolling process, then complete the omelet with the final one-third of the egg mixture.

8. Turn the omelet out onto a cutting board. Carefully slice into six pieces and transfer to a serving dish. Serve with daikon drizzled with soy sauce on the side.

1. Combine the sake, soy sauce and ginger in a bowl, then massage into the fish slices. Cover and leave to marinate for 10 minutes.

2. Pour the oil into a pot with sides at least double the height of the oil. Heat to 180°C (350°F), or until the end of a wooden chopstick inserted into the oil bubbles vigorously.

3. Remove the fish from the marinade, dry thoroughly with paper towel, then coat in the potato starch, ensuring it is completely covered.

4. Carefully place the fish slices individually into the oil. Do not touch for the first 30 seconds, to allow the potato starch coating to set, then stir quickly to separate the slices if they are clumping together.Cook for 1–2 minutes more, depending on their thickness, then remove and drain on paper towel. Sprinkle with a little salt.

5. Serve warm, with the cabbage, mayonnaise, rice and lemon.

Tuna tataki, a recipe in "Tokyo Up Late' (Smith Street Books), consists of seared tuna with cucumber and a simple ginger-garlic-soy dressing.

"Tokyo Up Late" (Smith Street Books) is a new book by Brendan Liew.

Tamago, a classic Japanese omelet, is featured in "Tokyo Up Late."