A lot of folks love pasta, but they don’t like waiting for that big pot of water to boil.

Here’s a little (well-known) secret: You don’t need all that water to cook pasta.

Not only that, but you can cook pasta and everything you need for a whole meal — tomatoes, meat, vegetables — in one pot at the same time. And you can do it all in less than 30 minutes.

The one-pot pasta method not only saves time, water and cleanup, but also makes a nearly effortless sauce.

So if you like recipes that give you a lot of flavor for only a little effort, give this method a try.

Part of what happens when you cook the pasta this way is it absorbs a lot of flavor compared to cooking it in water. To a certain extent, the sauce has been absorbed into the pasta, and that makes for good eating. Also, as the pasta cooks, it releases starch into the liquid, helping to thicken the sauce and ensure that it coats the pasta well.

This method does require some attention to the proportions of pasta to liquid.

If you want the CliffsNotes version for someone who just needs to fuel up the family with the least possible effort, take a 24-ounce jar of any brand tomato sauce and bring it to a boil with 2 cups water. Stir in 8 ounces of spaghetti, cover and cook 12 to 15 minutes, stirring often, until the pasta is tender. Serve with cheese of your choice. You can add ground meat or sausage to this, as long as you brown it first. You also can increase the pastas to 12 ounces provided that you increase the water to 3 cups.

The recipes below use 1 pound pasta with about 2 cups of tomatoes and 3 to 4 cups liquid — cooked covered. But consider that a general guideline.

You can use water for the liquid, but broth is even better because, as mentioned before, the pasta is going to absorb whatever flavor is in the liquid.

I used fresh tomatoes in these recipes because it’s summer, and the local tomatoes taste so good. Sometimes I peel them; sometimes I don’t. (To peel, core, then cut an X into the other end and drop into boiling water about 1 minute to loosen the skins. You also can grate the tomato — the skin will end up in your hand once the pulp is removed.) I like using cherry tomatoes partly because the skins don’t bother me.

A wider Dutch oven tends to work better with these recipes — helping the liquid to evaporate — but a narrower soup pot will work, too. Nonstick can be useful, as the goal is to cook off all the excess liquid before the pasta overcooks.

Depending on factors such as how liquidy your tomatoes are, the type of pasta and how hot your stove is, you may have to make adjustments as you go.

If not every teaspoon of liquid gets absorbed, that’s OK. More important is that you don’t let the pasta overcook.

For best results, watch the pot closely and taste the pasta often to determine if it’s done. If the liquid has been absorbed, and the pasta is still a bit too toothsome, add a ¼ to ½ cup liquid, re-cover and cook a few more minutes. Conversely, if the pasta is done but the sauce seems thin, remove the lid and turn up the heat to medium or medium-high and stir often for a minute or two until some of the liquid has evaporated and the sauce has thickened.

Note that adding cheese will help thicken the sauce, too.

A couple of other notes about cooking pasta this way:

1) Be sure to salt the dish, but don’t salt it nearly as much as you would salt traditional pasta water, because none of the salt goes down the drain — it all stays in the dish. Taste the liquid before you add the pasta; it should be well seasoned but not overly salty.

2) Cover the pot while cooking the pasta. You don’t want the liquid to boil off. You want the pasta to absorb it. (Some other one-pot pasta recipes call for uncovered pots, but they also use a lot more liquid.)

3) Reduce the heat once you stir in the pasta. Medium-low is usually sufficient when cooking pasta in a covered pan.

4) Stir it occasionally. You don’t want the pasta to stick together. You also don’t want it to stick to the bottom of the pan and burn.

Note that the sauce you get with this method is just enough to coat the pasta and other ingredients. You will not find a lake of tomato sauce in the pot here. So, if you’re the kind of person that needs your pasta drowning in boatloads of sauce, this method may not be for you.

But if you like the idea of a 30-minute meal that practically cooks itself and leaves you just one pot to clean, give these recipes a try.

1. In a soup pot or Dutch oven, cook sausage, carrot and onion about 3 minutes until sausage starts to brown and vegetables soften slightly. Stir in zucchini and garlic and cook 1 minute. (If you like the zucchini firm, wait and add it with the pasta; or you can sauté it but remove it and set it aside until the last minute.)

2. Stir in tomatoes, season with salt and peppers and cook 2 minutes. Add broth, thyme and oregano and bring to a simmer. Taste and adjust as needed; liquid should be well-seasoned.

1. In a Dutch oven, cook bacon over medium heat until brown. Remove bacon with slotted spoon to a paper towel. Remove all but about 2 tablespoons bacon grease. To the bacon grease, add chicken and cook about 4 minutes on each side, or until brown and just cooked through. Remove to a cutting board and let rest.

2. To the same pot, add the onion and cook about 3 minutes until slightly softened. Stir in garlic and cook 20 seconds. Stir in tomatoes, season with salt and peppers and cook 2 minutes.

3. Add broth and bring to a simmer. Taste and adjust as needed; liquid should be well-seasoned. Stir in pasta, cover and cook 7 minutes or until most of the liquid is absorbed and the pasta is almost tender. If pasta isn’t done but liquid is absorbed, add a little more liquid and cook a couple more minutes. If pasta is done but excess liquid remains, increase heat and cook 1 or 2 more minutes uncovered, stirring often.

4. Stir in spinach and cook just until wilted. (The spinach will cook enough even if left to sit off the heat for a few minutes.)

5. Slice or chop the chicken. Stir into the pot or serve the chicken over a bed of pasta, with cheese and bacon sprinkled over the top.

Note: If desired, substitute a pound of peeled and deveined shrimp. Just be sure to cook them less and leave them whole.

3 to 4 cups water or chicken broth

1. In a soup pot or Dutch oven, heat olive oil and butter over medium heat. Add onion and cook 2 to 3 minutes. Add garlic and pepper flakes and cook 30 seconds. Stir in tomatoes and salt and pepper to taste and cook 3 minutes, till slightly softened.

2. Add 3 cups liquid and bring to a simmer. Taste and adjust as needed; liquid should be well-seasoned.

3. Stir about half the cheese into the pot. Serve with remaining cheese sprinkled on top.

Hocus Pocus 2: They're Back (Spot) 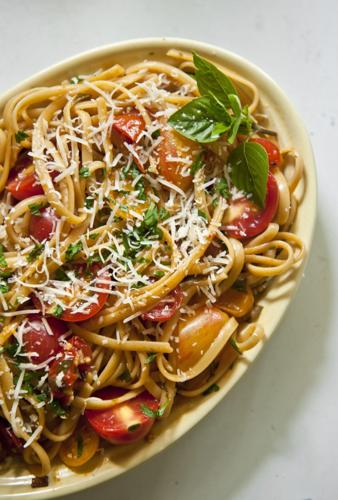 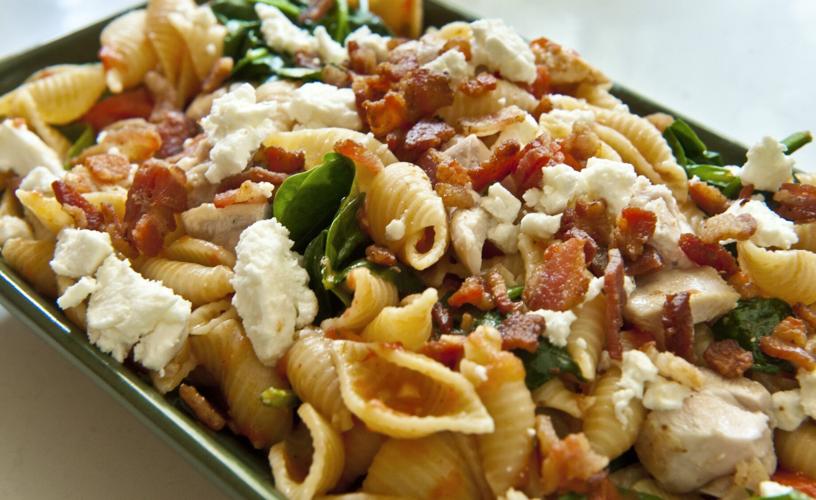 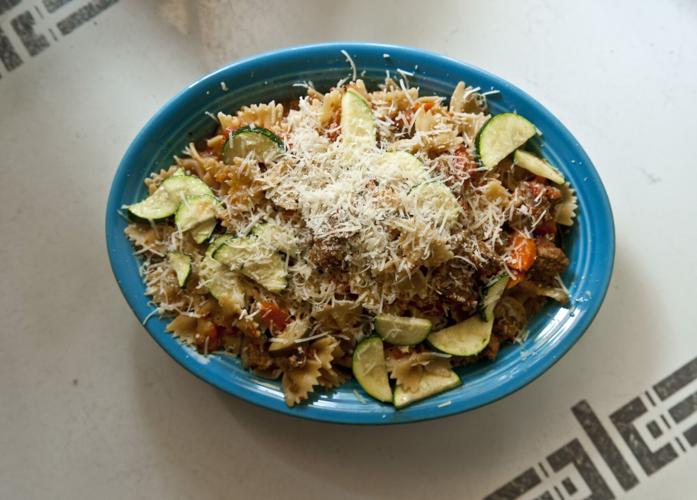 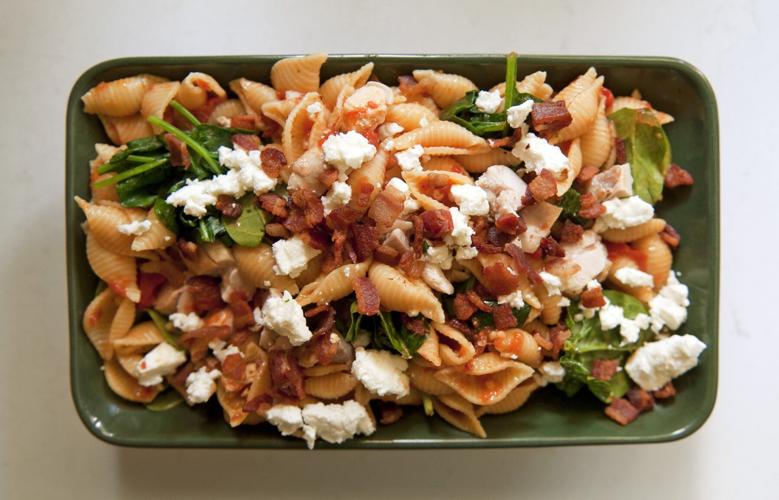 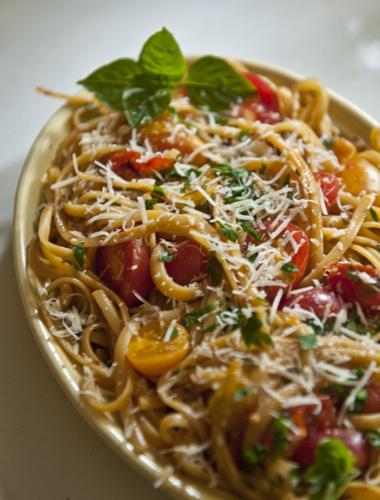 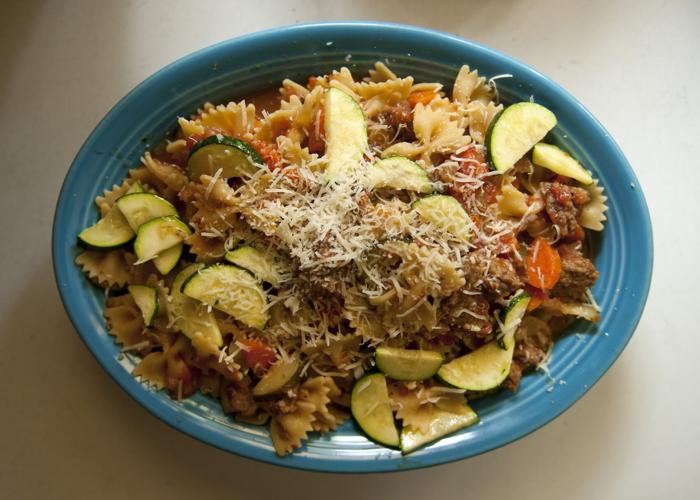 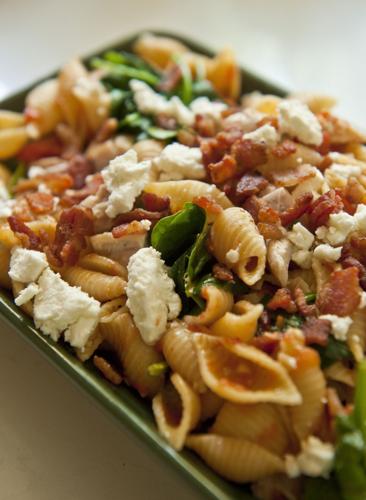 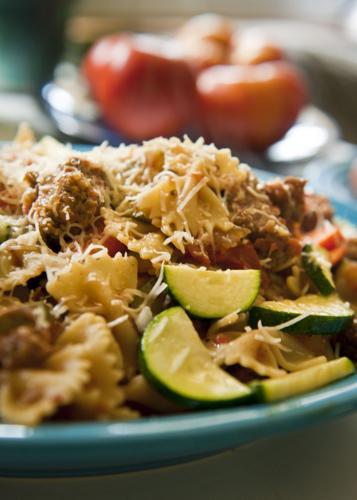 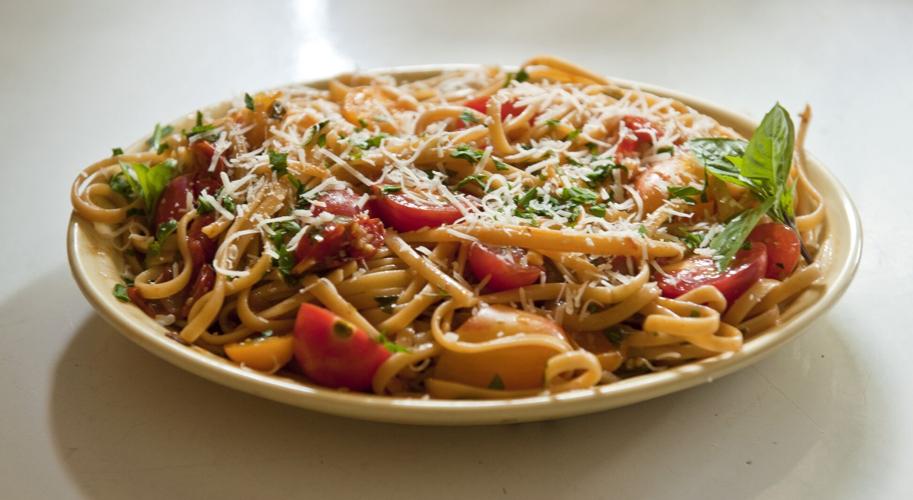