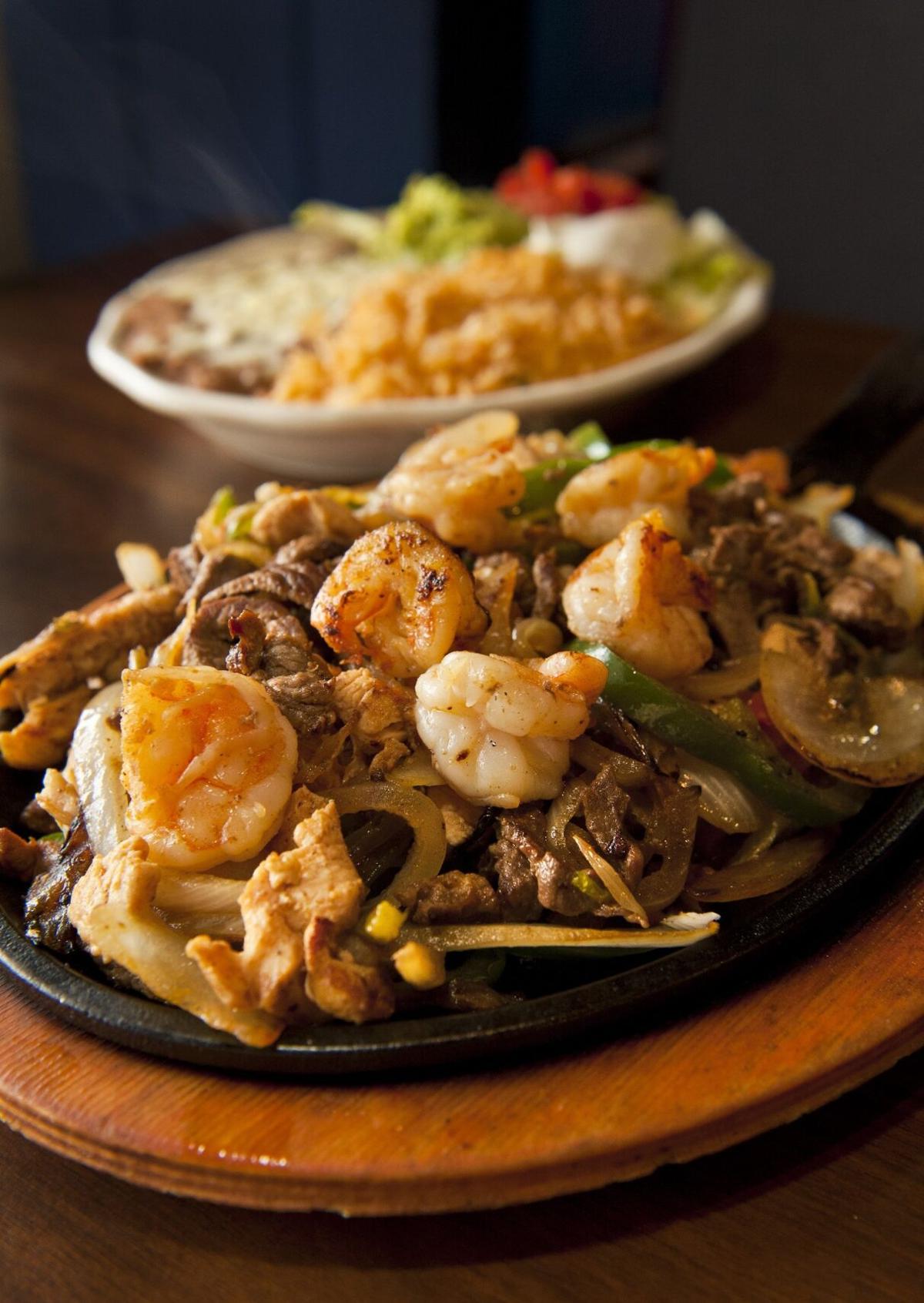 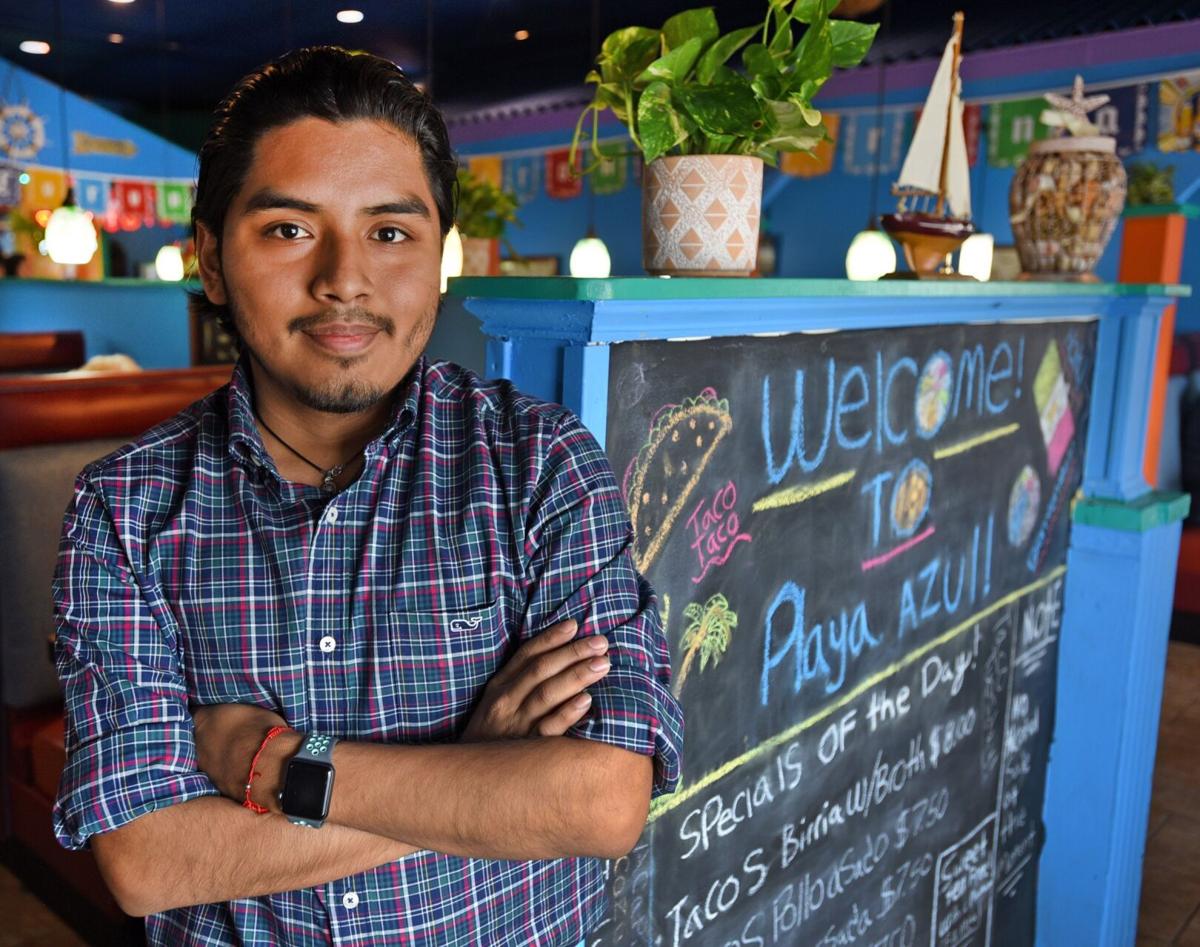 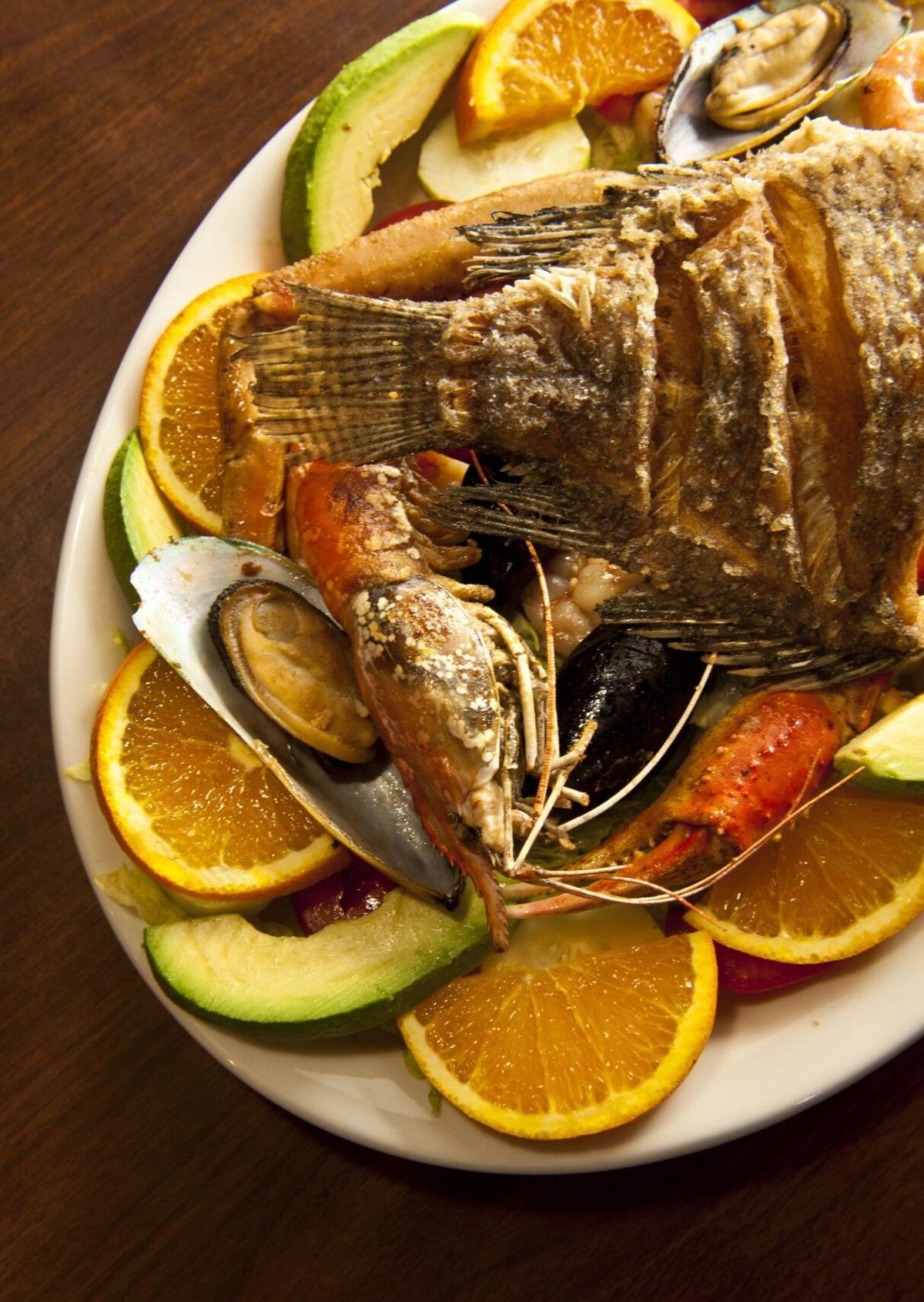 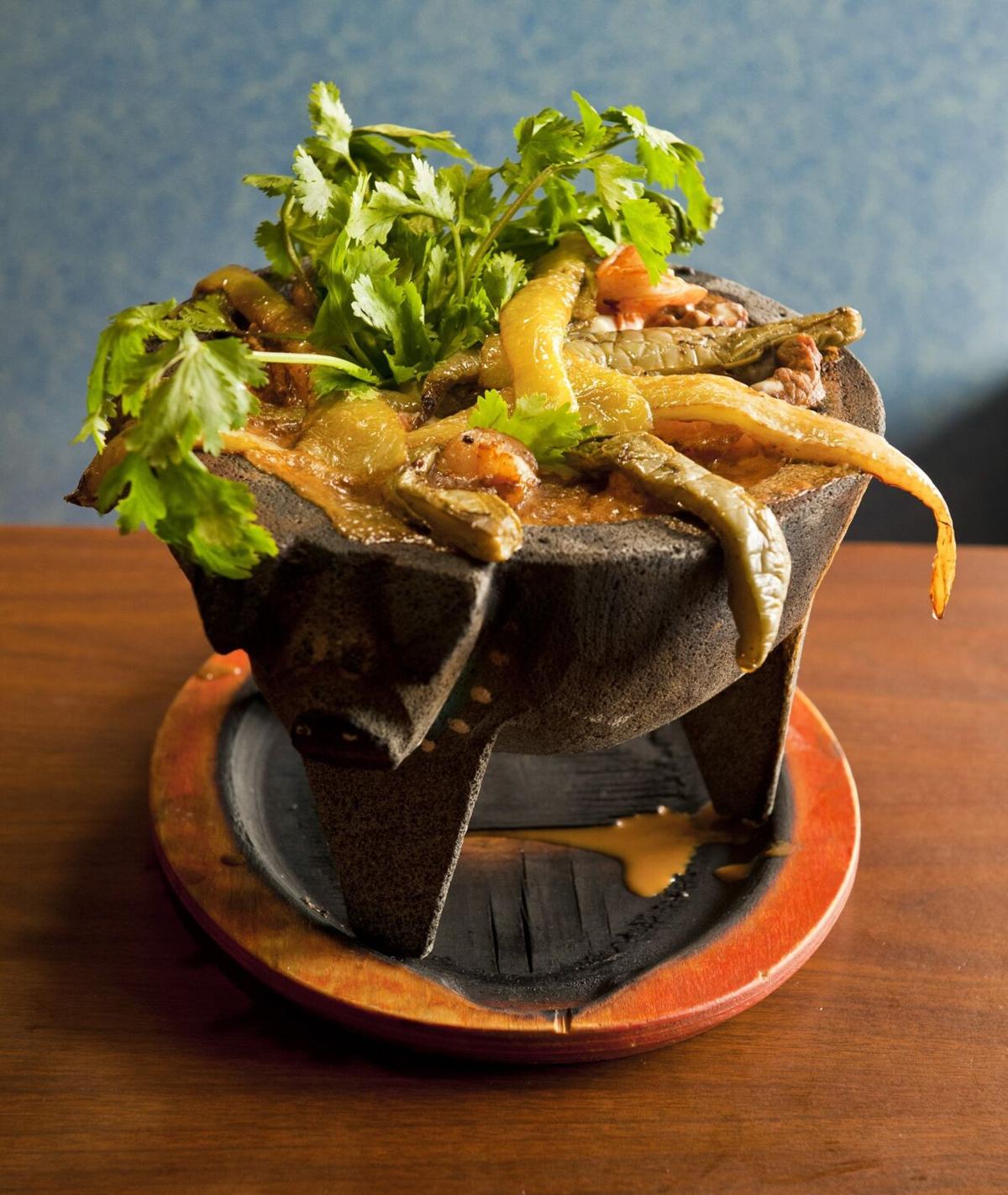 Molcajete Texano from Playa Azul. The dish features steak, chicken and shrimp, black beans and cheese in a special sauce and topped with cilantro, grilled bell pepper and cactus, served in a steaming molcajete (mortar) bowl. 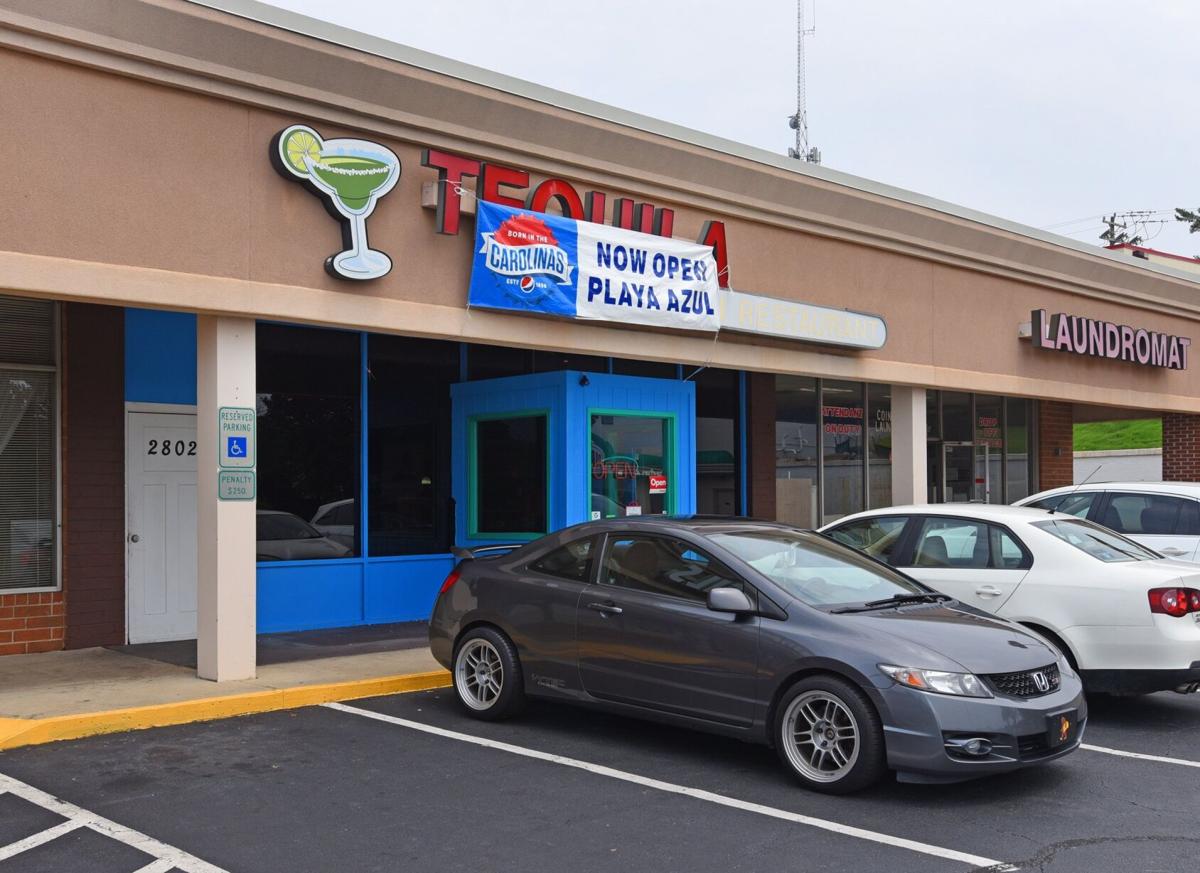 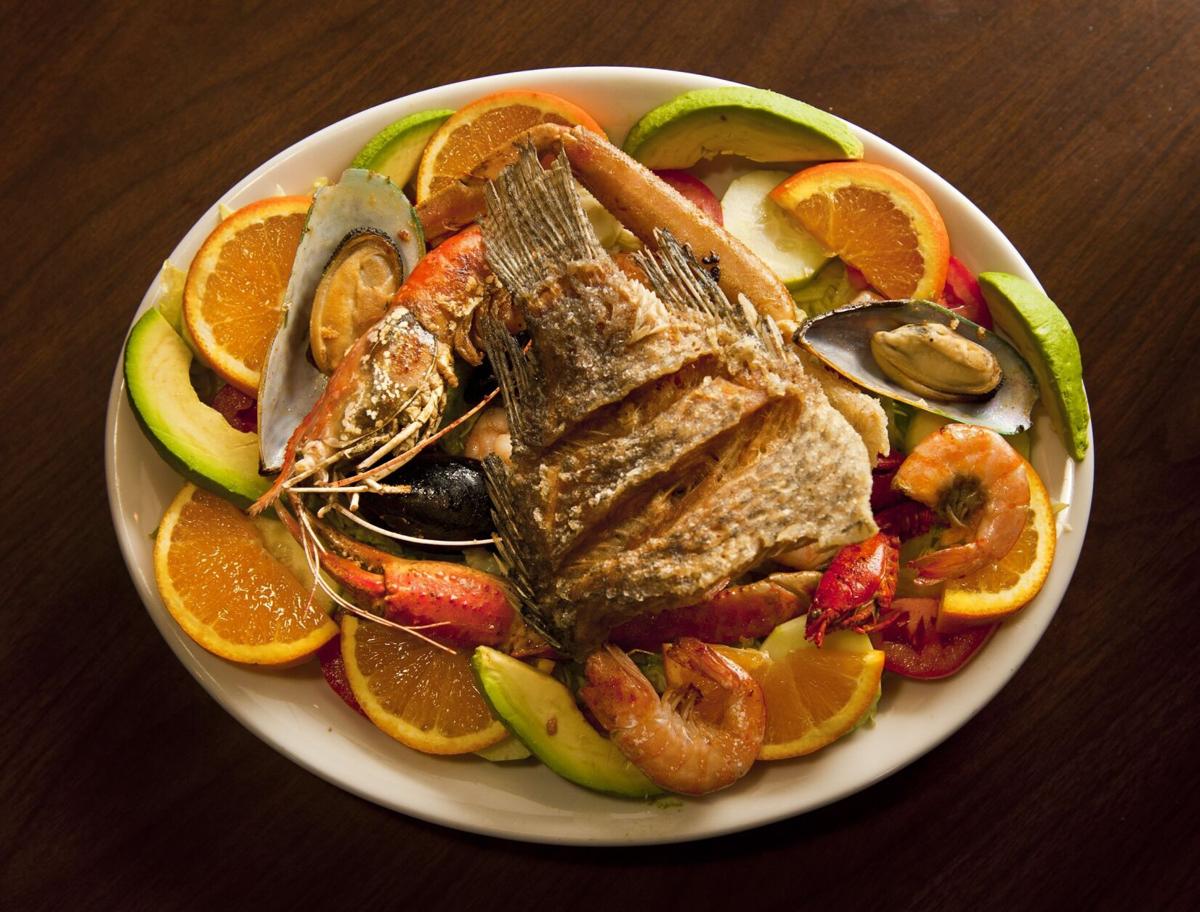 Playa Azul, which translates to Blue Beach, is owned by father and son Casimoro Sanchez and Eduardo Sanchez.

“I started working in restaurants when I was 16, bussing tables,” Sanchez said. “My whole family is in the restaurant business.”

Sanchez said he chose the name Playa Azul because his family comes from the Mexican coastal state of Guerero, which includes Acapulco.

“I just like the beach,” Sanchez said. “You’ll see we decorated the restaurant with a lot of things from the beach. And we’re trying to expand the menu with more seafood. Right now, we’re just experimenting to see what works — like we added calamari last week.”

Though Casimiro Sanchez doesn’t directly work in the restaurant, he did provide a lot of the recipes, his son said. “And my dad has been helping train our cooks.”

Sanchez also is serving some of his favorite home recipes from his mother, including posole (pork and hominy stew), costillas en de salsa and caldo de res (beef stew with broccoli, carrots and corn on the cob).

Since opening June 21, Sanchez said, a couple of popular dishes already have stood out with customers, including mojarra dorada (whole fried tilapia, $11.99) and carnitas (Mexican-style pork, $7.99-$9.99). “We do our carnitas a little different,” Sanchez said. “We cook it with beer and tequila, which helps keep the meat tender inside.”

Fajitas are available with a large list of possible proteins, including scallops, calamari and vegetables. The fajitas Texanas ($13.99) combines steak, chicken and shrimp and comes with Mexican rice, refried beans and guacamole.

The Platillos Mexicanos section of the menu includes a variety of authentic tacos, including al pastor, chorizo and barbacoa ($8.79 to $10.99 for a plate of three with rice and beans). Tacos de birria, served with a rich broth for dipping, also are available.

That section of the menu also includes the mariscada ($15.99), a mixed seafood platter with fried tilapia, mussels, shrimp and more, and molcajete ($13.99 to $16.99), a stew with black beans and cactus served sizzling hot in the mortar dish for which it is named — with a choice of beef, chicken, shrimp or a combination.

Playa Azul is still waiting on its ABC permits. When it gets them — hopefully in the next couple of weeks — it will be serving Dos Equis and Pacifico beer on tap, and also will offer sangria, margaritas and more at the bar.

Molcajete Texano from Playa Azul. The dish features steak, chicken and shrimp, black beans and cheese in a special sauce and topped with cilantro, grilled bell pepper and cactus, served in a steaming molcajete (mortar) bowl.