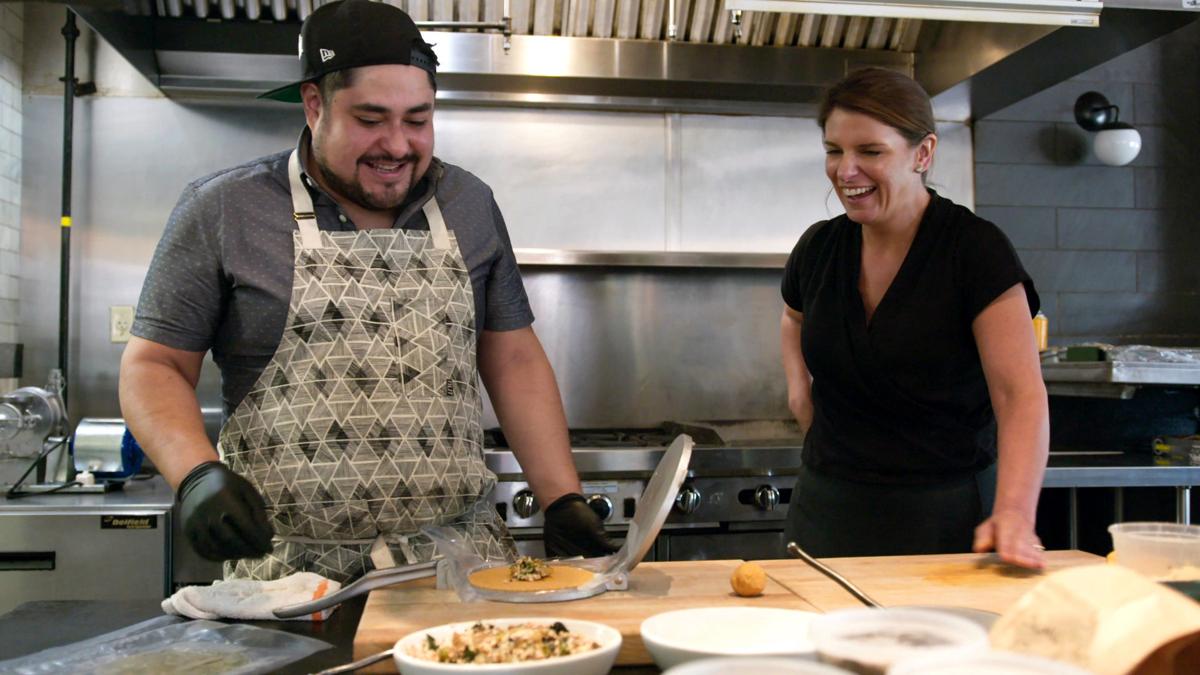 Chef Oscar Diaz shows Howard that enchiladas can also be empanadas in his restaurant kitchen, The Cortez, in Raleigh. image is from the “American as Hand Pie” episode of “Somewhere South” 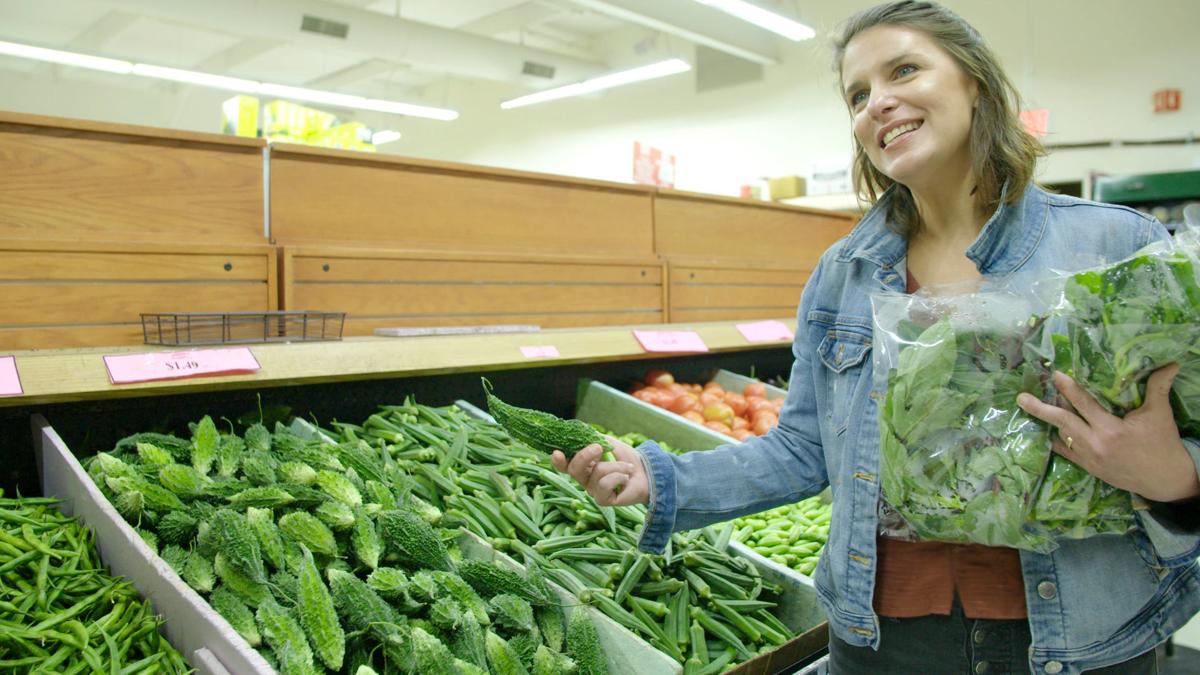 Vivian Howard holds up a bitter melon while shopping at an Indian grocery store in Cary. Image is from the “It’s a Greens Thing” episode of “Somewhere South” 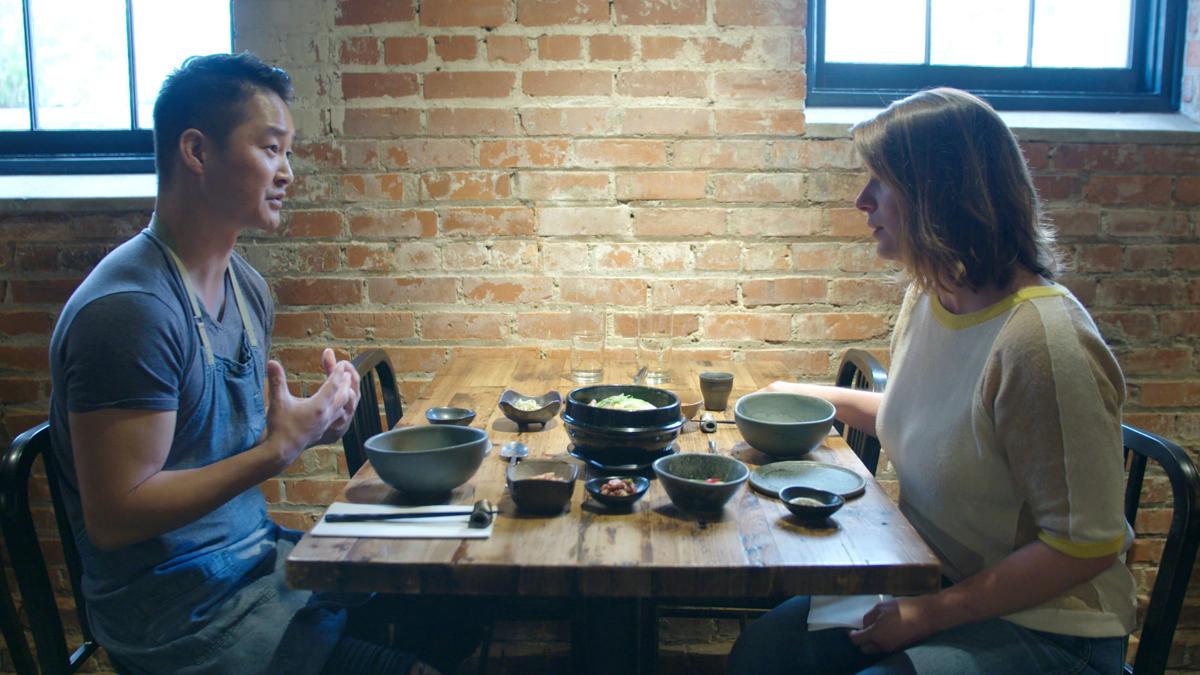 Chef Mike Lee talks about banchan, or Korean side dishes, with Howard while enjoying samgyetang, a Korean chicken and rice soup at his restaurant, M Sushi, in Durham. Image is from the “What a Pickle” episode of “Somewhere South”

North Carolina chef Vivian Howard will return to public television March 27 with the premiere of her new series “Somewhere South,” and the first episode includes a segment about Winston-Salem.

The six-part series will be shown at 9 p.m. Fridays on UNC-TV through May 1. Howard, of Kinston, previously was the host of the Emmy-winning “A Chef’s Life.”

“I think ‘A Chef’s Life’ gave people in Eastern North Carolina pride in their place and traditions — we did such a deep dive into that,” Howard said in a recent phone interview. “The purpose and goal of this series is a little different. We’re trying to paint a picture that’s far more complex than what we think of as Southern food.”

The first hourlong episode of “Somewhere South” is all about hand pies. It begins with Howard working on making hand pies for her new Handy & Hot bakery concept, which started as a pop-up, is now an online business, and is scheduled to become a retail shop in Charleston, S.C.

During the episode, Howard grapples with the difficulty of large-scale production of labor-intensive hand pies. So she makes a trip to Winston-Salem to see how it’s done at B&G Pies, a company founded here in 1949.

B&G makes fried fruit pies, sold in single 4-ounce servings in convenience stores and other locations throughout the Triad. The dough, made from lard, is hand-rolled. The pies are filled and shaped by hand before being fried in a mixture of beef tallow and vegetable shortening.

“I was on this quest to do this thing faster and everything I tried wasn’t working,” Howard said of her work with hand pies.

She thought B&G might have some shortcuts to show her. “What I discovered is they have a lot of hands,” Howard said with a laugh.

Howard said that the new show includes a lot of segments on North Carolina, but she also travels around to other Southern states.

In the hand-pie episode, Howard also visits Sarah’s Empanadas in Durham and The Cortez in Raleigh, showing how immigrant food traditions are being incorporated into the South’s. She also travels to Fairmont, W.Va., for its pepperoni-roll festival. Along the way, she tells the Southern history of hand pies as a portable food designed for miners, field hands and factory workers.

Subsequent episodes tackle the old and new traditions of such foods as pickles, greens and dumplings.

Howard said that the new series has some similarities to “A Chef’s Life.”

The series is less about her personal life, she said, but it does deal with her professional life. And the format calls for scenes of her cooking as well as interviewing others. In “A Chef’s Life,” her interviewees were mostly farmers or people she knew in and around Kinston. In “Somewhere South,” each episode has at least one expert, often a chef or artisan food producer, but not necessarily from North Carolina.

“Every episode is a deep dive into a dish that every culture shares,” Howard said. “We explore the ingredients, the themes and the purpose, and the way that we think of these dishes. We tried to show the show the South as a microcosm for our country — and there are many countries represented.”

Howard also said that she has a new book coming out in October.

“I just finished the new book, ‘This Will Make It Taste Good,’” she said.

She said that whereas her first book, “Deep Run Roots,” was basically a historical document of Eastern North Carolina recipes and dishes she made for her Kinston restaurant, Chef & the Farmer, the new book is more personal, and it’s organized around a handful of “kitchen heroes,” or flavorful ingredients, that can be used to bolster a lot of different dishes.

“This is more who I am as a person and as a storyteller,” she said. “This is the type of food I cook for myself and my family.”

‘WandaVision’ wins big at the 2021 MTV Movie and TV Awards

‘WandaVision’ wins big at the 2021 MTV Movie and TV Awards

Mousse cake is a chocoholic's dream that melts in your mouth

This hybrid dessert melts in your mouth, and it's all about the chocolate

The latest victims of supply shortages? Sauce-loving customers at Chick-fil-A.

Mama Mia now has a bigger store with easier access in Clemmons.

Scallions, radishes, beets, asparagus, snow peas, spinach and other greens are all in season now. Use them in quick and easy pastas.

German American still enjoys a taste of his native country

Chef Oscar Diaz shows Howard that enchiladas can also be empanadas in his restaurant kitchen, The Cortez, in Raleigh. image is from the “American as Hand Pie” episode of “Somewhere South”

Vivian Howard holds up a bitter melon while shopping at an Indian grocery store in Cary. Image is from the “It’s a Greens Thing” episode of “Somewhere South”

Chef Mike Lee talks about banchan, or Korean side dishes, with Howard while enjoying samgyetang, a Korean chicken and rice soup at his restaurant, M Sushi, in Durham. Image is from the “What a Pickle” episode of “Somewhere South”