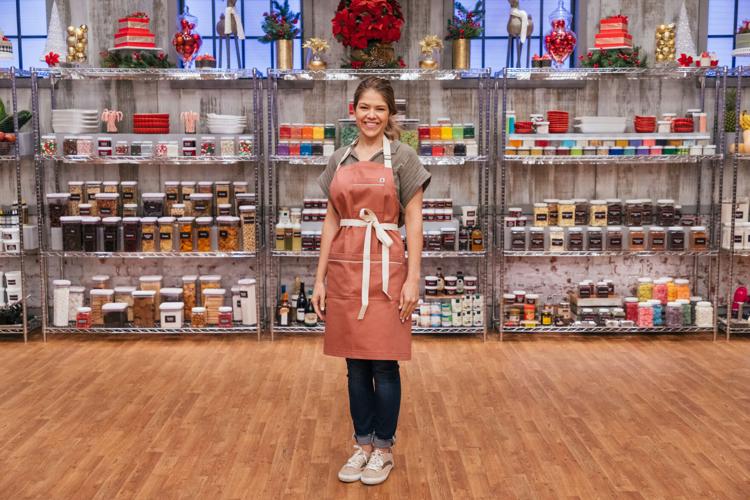 Contestant Jennifer Hood of Winston-Salem is shown on the set of “Holiday Baking Championship.” She competes on season 8. 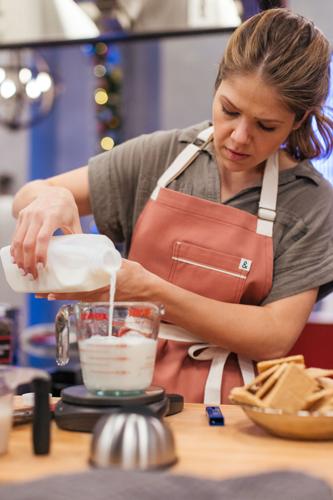 Winston-Salem resident Jennifer Hood will be among the bakers competing for $25,000 when the new season of “Holiday Baking Championship” premieres at 8 p.m. Monday on the Food Network.

Hood is a 29-year-old dietitian. She does independent nutrition counseling and works as an assistant director of the school nutrition program for the Yadkin County public school system.

But while she counsels youth to eat healthy by day, she bakes cakes by night.

Her path to a Food Network reality competition began last year during the beginning of the COVID-19 pandemic. Stuck at home — then Charlotte — and working remotely — then for Cabarrus County schools — Hood turned her favorite pastime into a side business, JBakes.

“It was just so slow during COVID,” she said. “I’d bake birthday cakes, wedding cakes, cupcakes, cookies, anything people wanted.”

She even offered kids baking classes through Zoom.

Before she knew it, the appetizing photos of baked goods on her Instagram account — and the hashtag #holidaybaking — drew the attention of someone associated with the show’s production company. That began a series of interviews that culminated in her appearance on the show.

Getting her interested in the show didn’t take much persuading.

“Back in high school, when everyone talked about where they would be in 10 years, I told everybody I would be on the Food Network,” she said.

Friends even called her Betty Crocker.

Hood’s love of baking began before she could even reach the stovetop.

“Both of my parents always baked,” she said. “I learned from being in the kitchen with them from an early age. They would put me up on a chair so I could be stirring.”

Though Hood can’t say how she did in the competition, she did say she loved it. “It was absolutely incredible. I would do it all over again tomorrow.”

The first episode of Season 8, which is 2 hours, has Hood and her 11 fellow competitors baking fall and winter doughnuts as well as apple and cheese desserts. What viewers quickly find out is that almost every other competitor on the show is a full-time professional chef.

“That was very intimidating,” Hood said. “But I feel that I do well under pressure. I enjoy a challenge. I didn’t feel over my head. But the first day, I was like, ‘What the heck am I doing here?’ The others are very, very talented.”

Despite the stress, she said, the experience was enjoyable because everyone was welcoming and supportive.

“I was super blown away by how nice everyone was. The judges, too. And I’m not just saying that,” Hood said. “At the end of the day, it was family-friendly fun. I have the rest of the cast to thank for that. Even though it was insanely stressful, I had a great time.”

Like many people after their first reality-competition show, Hood is hoping to do it again. But not real soon.

“I found out I was pregnant while filming,” Hood said.

She and husband Mark Hood are expecting their first child in March.

WATCH NOW: A look at the new season of Holiday Baking Championship

Contestant Jennifer Hood of Winston-Salem is shown on the set of “Holiday Baking Championship.” She competes on season 8.