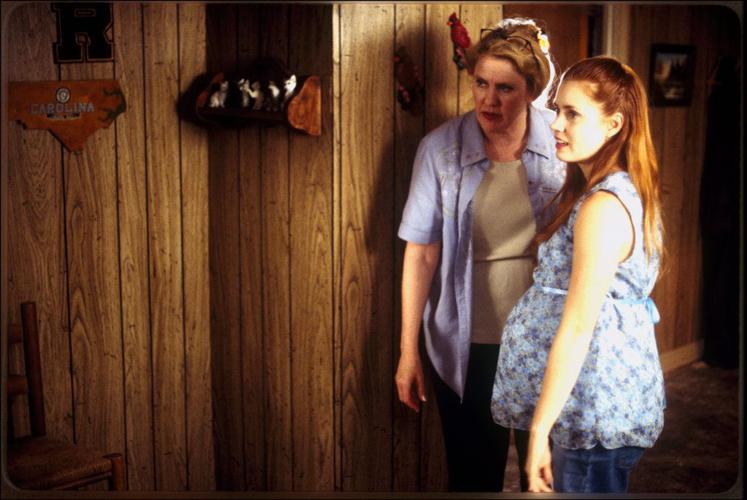 Celia Weston and Amy Adams are in Phil Morrison and Angus MacLachlan's "Junebug," which is set is Pfafftown. 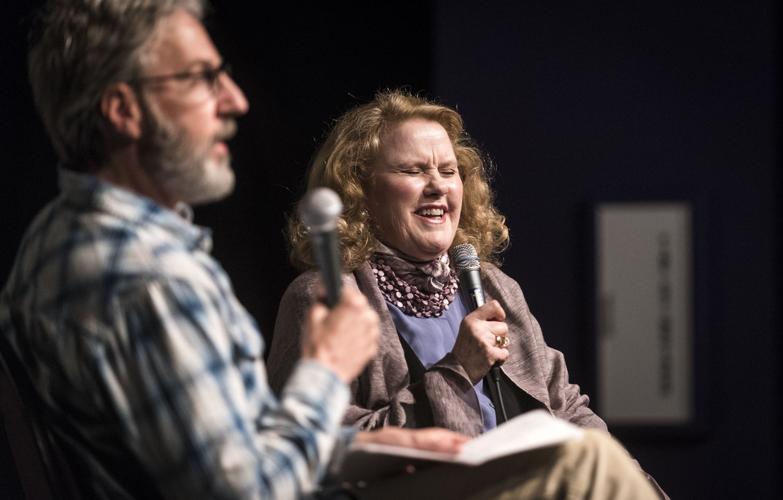 Actress Celia Weston, right, the 2017 Master of Cinema honoree at RiverRun, laughs during a panel discussion with filmmaker Angus Maclachlan.

It has been 15 years since movie audiences were first introduced to the Johnsten family in the movie "Junebug," a comedy-drama written by local playwright Angus MacLachlan and set in this area.

The movie featured a break-out performance by Amy Adams, who was nominated for an Academy Award as Best Supporting Actress, the first of six Oscar nominations to date for her. It also included such familiar faces as Embeth Davidtz, Ben McKenzie, Celia Weston and Scott Wilson ("The Walking Dead"), as well as music by Yo La Tengo. The movie garnered critical acclaim, with critic Roger Ebert declaring it a film that "understands, profoundly and with love and sadness, the world of small towns."

To commemorate the anniversary, "Junebug" is coming to the Marketplace Drive-In Cinema tonight, with newly recorded introductions by MacLachlan and director Phil Morrison, also a Winston-Salem native. It is being presented by the RiverRun International Film Festival.

"I think it's great that RiverRun wanted to do this," said MacLachlan, who has gone on to write "Stone," a 2010 thriller starring Robert De Niro and Edward Norton, and direct as well, including "Goodbye To All That" and "Abundant Acreage Available."

MacLachlan said that he recently rewatched "Junebug" for the first time in many years, to show it to his daughter Lily, 19, who had never seen it but had heard about it.

"I was pleased that I liked it quite a bit, and she liked it too," he said. "It was nice to watch it with someone who had never seen it before. She laughed and was moved, and it caught her interest - she didn't want to grab her phone and look at it halfway through.

"It's a satisfying film, and it was nice to see everyone again. I had not seen it since I directed a couple of films, and it was interesting to see how Phil did such a wonderful job. The casting is so terrific - not just the known actors, but the extras are so on the money and right, and that's really a quality of the director, I think. I was a little concerned it might have become dated, but I don't think it has. It's specific to its time and place, but I think there's something that still works."

He has been pleased to see the movie continue to get attention and acclaim, getting mentioned in podcasts and retrospectives, including one online piece that included it among "15 Top Monologues That Will Break Your Heart" and a WUNC Radio piece on "The South in Film."

"I don't like the phrase 'I'm proud of it,' but I'm so happy to be a part of it," MacLachlan said. "The thing that I remember is when I first saw the first rough cut, it was unfinished and needed to be worked, but it still felt like Phil Morrison did it, it was kind of like catching lightning in a bottle, it was what I'd hoped it would be and then better.

"I still learn from what Phil did. His choices are so unique as far as how he's framing the shot, such as the introduction of Amy Adams' character with this incredible closeup. ... Over and over again, he makes such good choices."

MacLachlan still keeps in touch with Morrison, who now lives in the Chapel Hill area. He also had praise for the art direction by David Dornberg - "that house is so alive and real, and you an feel those peoples' lives," he said, as well as the costuming, the music, the editing, and other elements. "All the way down the line, people did such a good job," he said. "That's what was so great about seeing it again."

The movie is quintessentially about the Winston-Salem area, but there was a time when it might have not been filmed here.

"It was special in so many ways," she said. "First of all, it brought the talented writing and directing duo of Angus MacLachlan and Phil Morrison, who had collaborated together on Phil’s NYU thesis film 'Tater Tomater,' back together to create one of the most critically acclaimed and successful films that has been shot in the region."

She remembers talking with the producers about "all of the things they were promised - including free accommodations - if they shot in one of two other cities. I explained that this area rolls out the red carpet for all filmmakers, and because the film is being directed and written by Winston-Salem natives, they will find no better cooperation anywhere else on the planet, and I was right.

"The neighborhood where they shot was practically a back lot with many recently sold homes," she said, since homeowners had sold their properties to the city to be demolished for a municipal project. "It was a perfect scenario to seal the deal and get the film made here."

Rob Davis, the executive director of RiverRun, said that the film festival was "delighted to spotlight a film with local ties as part of our RiverRun Retro series."

"As we were looking at potential titles, we realized this is an anniversary year for 'Junebug' and felt it was an ideal time to present it on the big screen," he said.

Both MacLachlan and Celia Weston are on RiverRun's advisory board, and in addition to the video introductions by MacLachlan and Morrison, Weston "has sent some memories to be shared with the audience," Davis said. "As RiverRun has pivoted to virtual and drive-in screenings, we’re pleased to present one of our Retro programs at the Marketplace Drive-In. Normally, we have a special guest on stage for Retro programs, but we’re delighted to have two new video introductions as well as Celia’s memories."

MacLachlan says he used to go to the drive-in all the time when he was a kid, and was happy to hear that "Junebug" was going to screened that way for its anniversary. "I hope people come out," he said. "The experience is fun."

RiverRun Retro Presents a "Junebug" 15th Anniversary Screening at the Marketplace Drive-In Cinema, starting at 7:30 p.m. today. Showtime is at 8:15.

Tickets are $20 a carload, plus tax and service fees; a few VIP spaces may still be available at $30. For ticket information, go to mpcwsdrivein.simpletix.com/e/57721

Fireworks to color the sky in Winston-Salem, Kernersville and Greensboro

Fourth of July celebrations in and around Winston-Salem, include:

Musician believed in the communal powers of music

The singer and songwriter was convicted of racketeering and sex trafficking last year at a trial that gave voice to accusers who had once wondered if their stories were ignored because they were Black women.

Herd of life-size animatronic dinosaurs from Apatosaurus to T-Rex, along with a 50-foot Megalodon shark, stomps into Winston-Salem

Mary Mara, an actress known for roles on "ER" and "Ray Donavan," has died at age 61 after police believe she drowned in a New York river.

Children and adults can walk among the dinosaurs when Jurassic Quest comes to Winston-Salem this weekend.

The Splash Mountain rides at Disneyland and Disney World will reopen in 2024 with a theme replacing a backstory viewed as perpetuating racist stereotypes.

Antique toasters will be topic of Lewisville lecture

The Lewisville Historical Society will sponsor a program about antique toasters at 6 p.m. July 11 at the Mary Alice Warren Community Center, 7…

Maya Hawke: I 'wouldn't exist' if my mom Uma Thurman didn't get an abortion

Tim Allen slams ‘Lightyear’ after being replaced by Chris Evans

Tim Allen slams ‘Lightyear’ after being replaced by Chris Evans

Celia Weston and Amy Adams are in Phil Morrison and Angus MacLachlan's "Junebug," which is set is Pfafftown.

Actress Celia Weston, right, the 2017 Master of Cinema honoree at RiverRun, laughs during a panel discussion with filmmaker Angus Maclachlan. 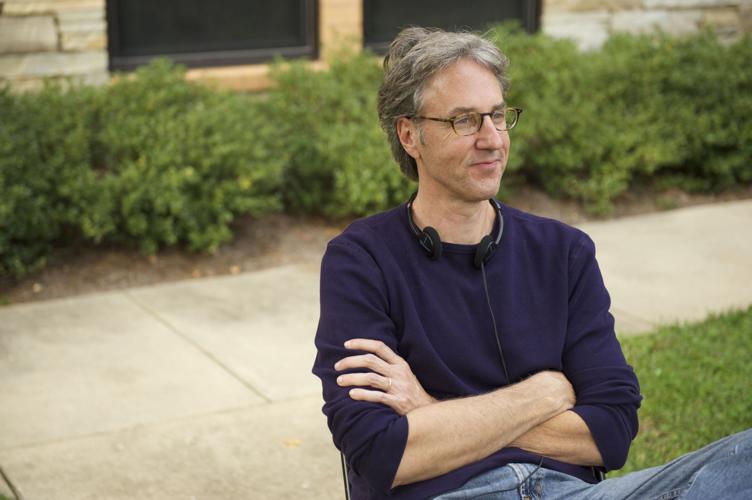