Frances McDormand in a scene from the film "Nomadland." 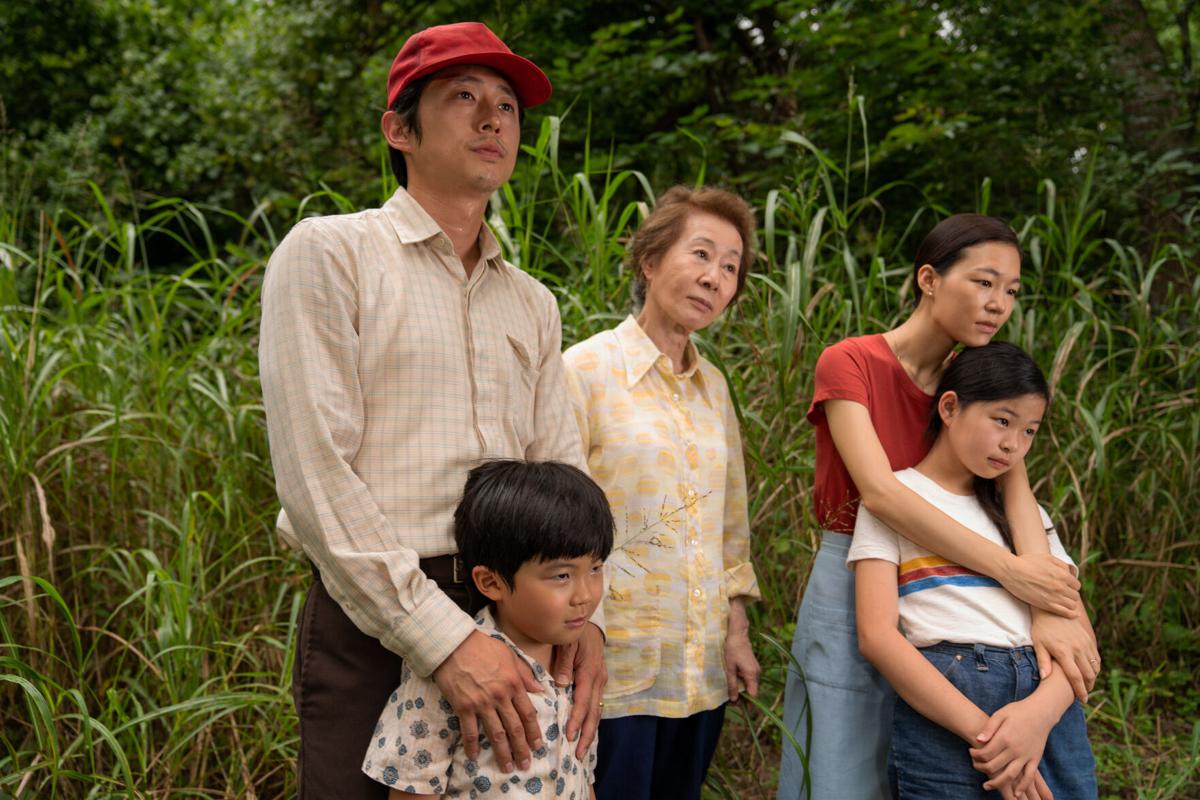 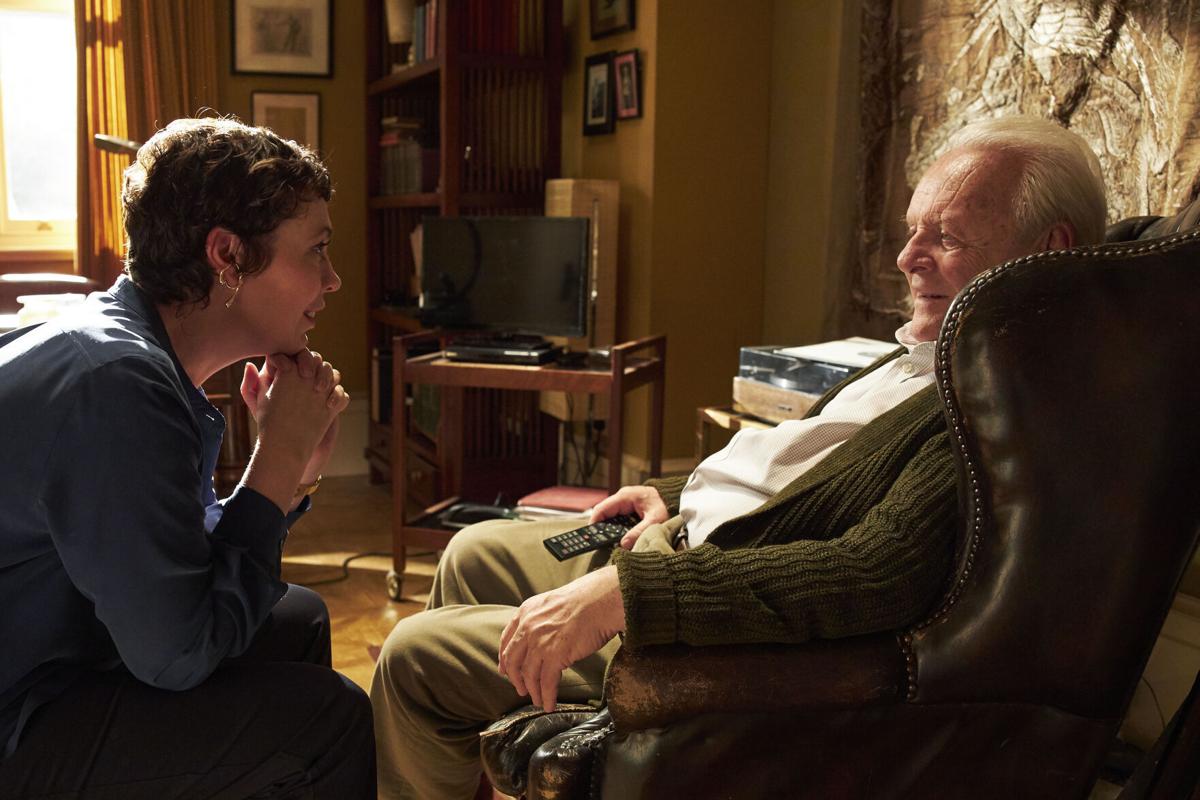 Olivia Colman as Anne and Anthony Hopkins as Anthony in a scene from "The Father."

Riz Ahmed in a scene from "Sound of Metal." 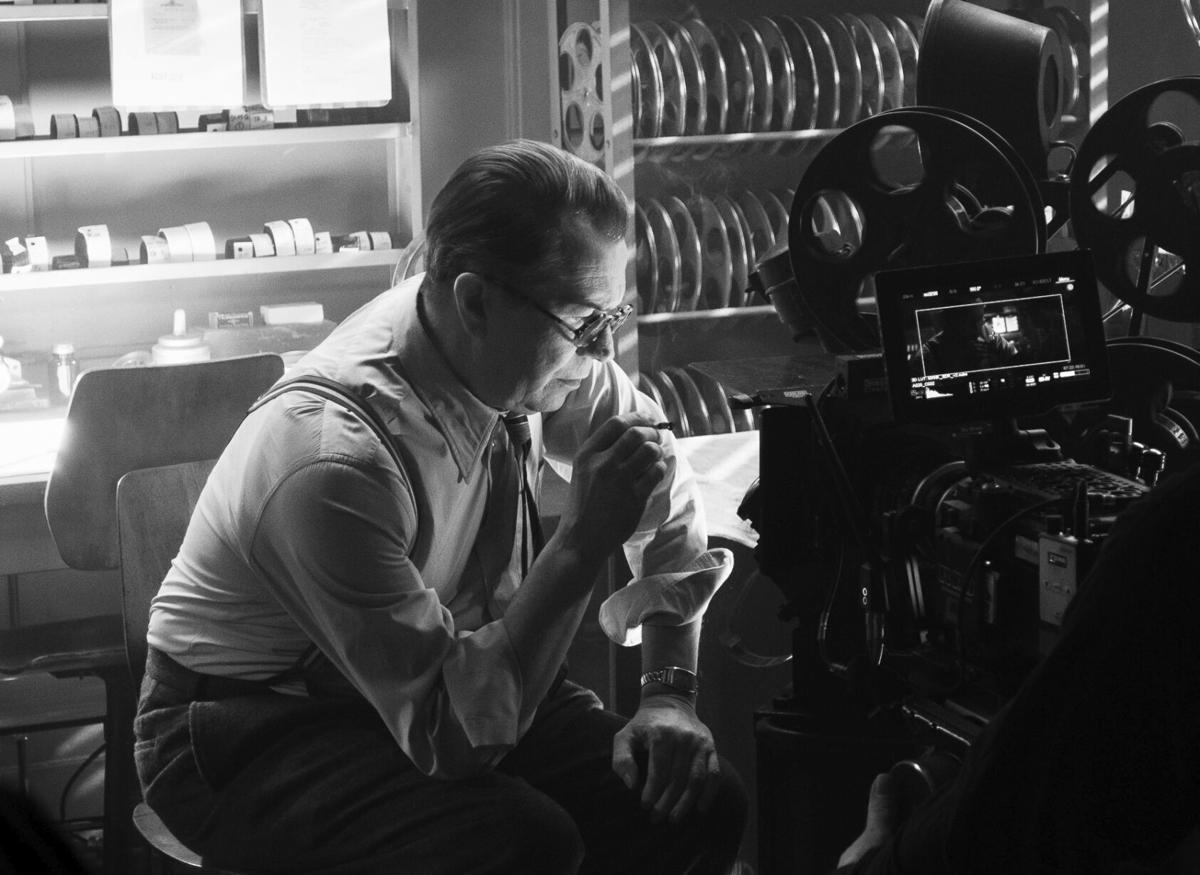 Gary Oldman as Herman Mankiewicz in a scene from "Mank."

Carey Mulligan in a scene from the film "Promising Young Woman." 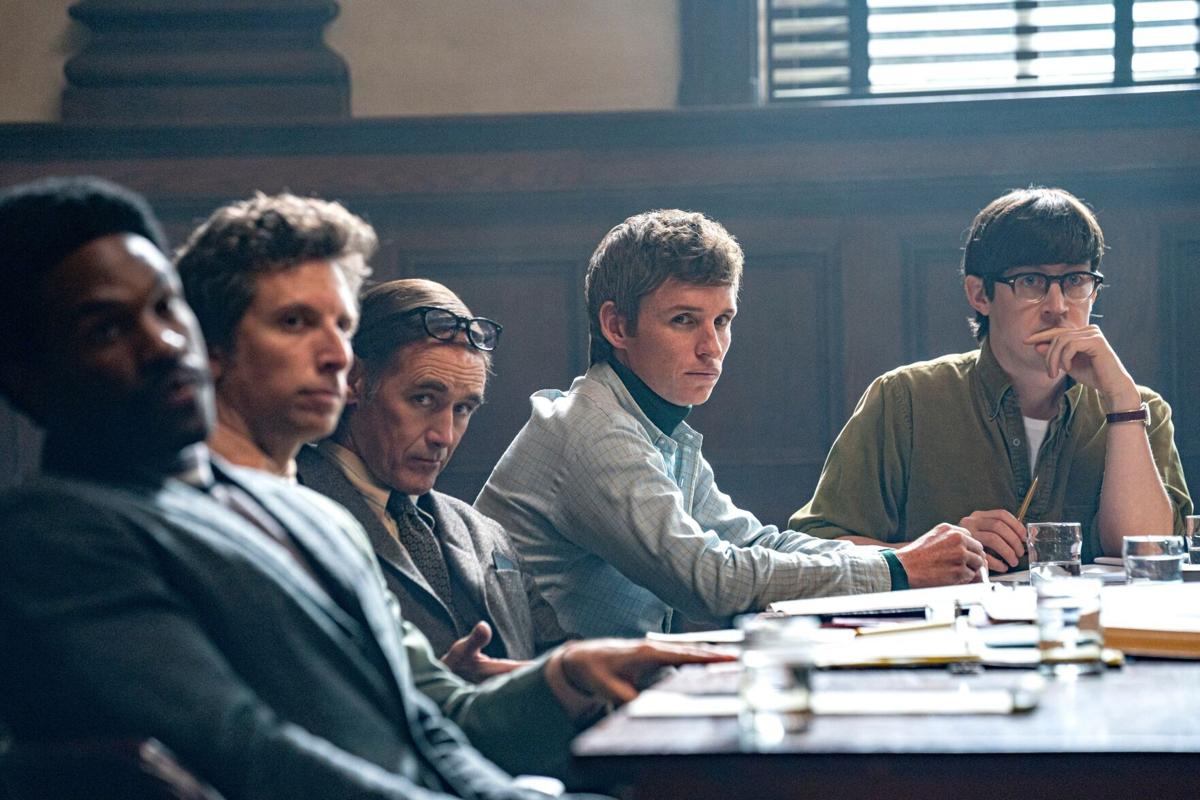 Yahya Abdul-Mateen II as Bobby Seale, Ben Shenkman as Leonard Weinglass, Mark Rylance as William Kuntsler, Eddie Redmayne as Tom Hayden, Alex Sharp as Rennie Davis in a scene from "The Trial of the Chicago 7." 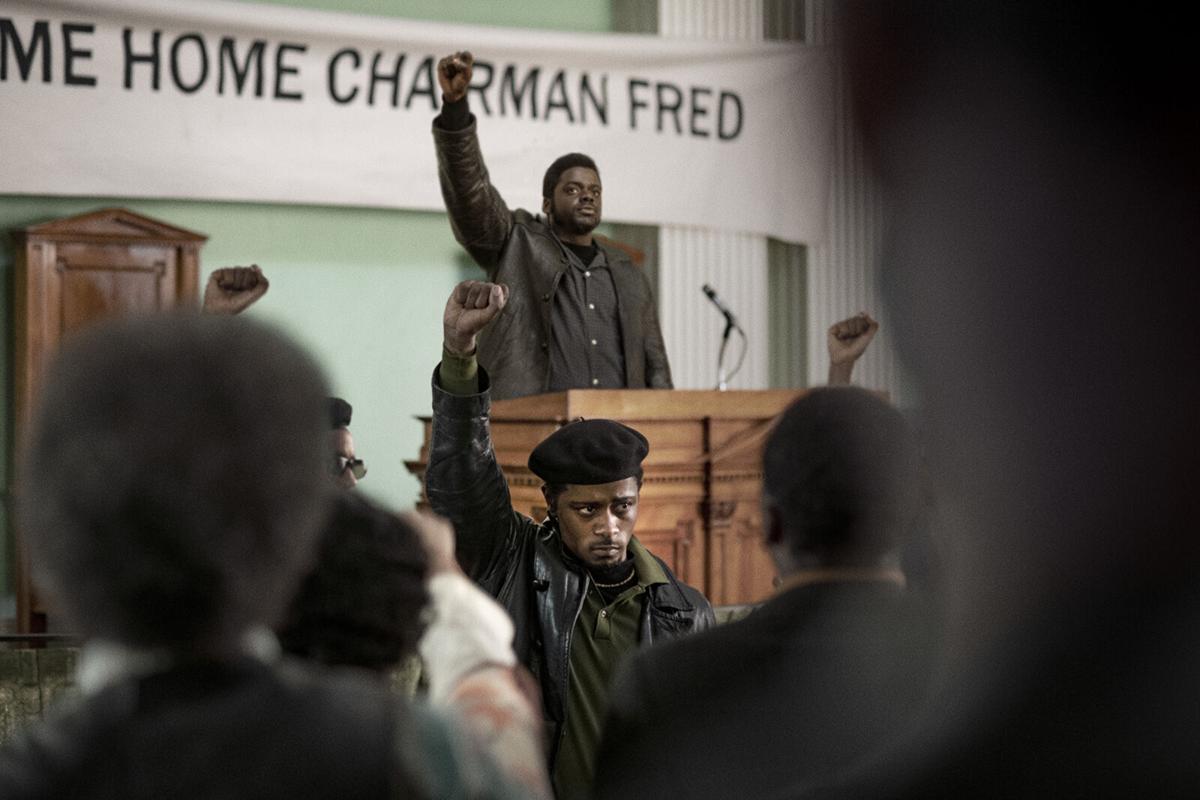 LaKeith Stanfield and Daniel Kaluuya in "Judas and the Black Messiah." 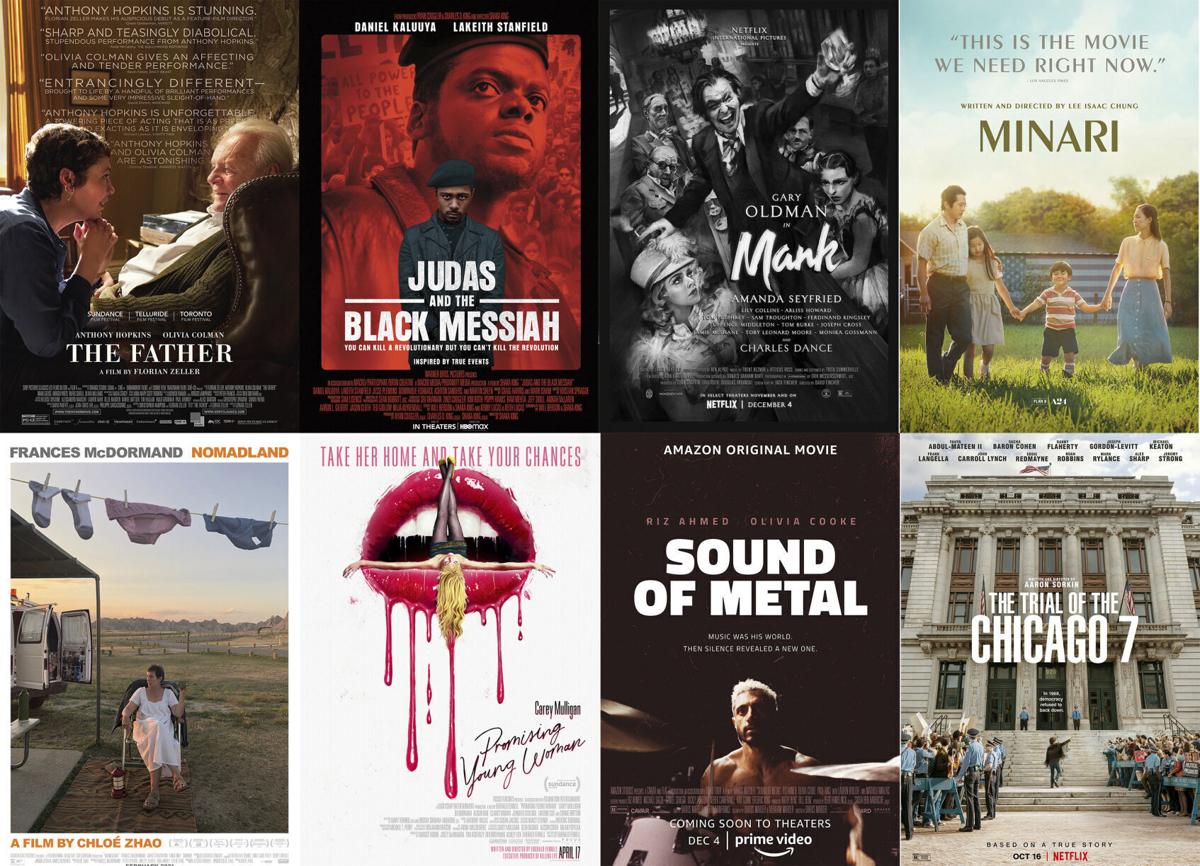 That’s not a “meh” for the quality of the nominees this year; some terrific films are in the race, and the lack of big-studio tentpoles has given more visibility to smaller, interesting movies. But for those of us who fell in love with movies because of their immersive, larger-than-life-ness, the year’s been a big cinematic sigh.

With cinemas shuttered for much of 2020, and many potential moviegoers still waiting for vaccinations before venturing out, it’s been a time of watching movies at home, wondering what the experience might feel like in their proper size. And the Oscars — on April 25 — feel weirdly off-kilter; pushed out two months from their usual late-February slot, and decidedly unfestive this year (no Oscar parties, alas).

However, let us look on the bright side: This year’s nominees are as accessible as they have ever been, with all but one best picture nominee currently available for streaming. And they’re a fresh and compelling lot. Catching up with a few of them, I was struck anew by what it feels like to watch a crowd of people, or even a small maskless group. Movies are always time capsules — this year, more than ever.

So, as we anxiously await a return to movie theaters, let’s take a look at this year’s eight best picture candidates, viewed virtually.

Chloe Zhao’s “Nomadland,” which won the Producers Guild Award on March 25 (often a harbinger of Oscar gold), showcases a brilliant Frances McDormand as a woman for whom home isn’t a place, but something you carry.

It’s a quiet, meditative film of often stunning beauty (the gorgeous cinematography, by Joshua James Richards, is also nominated, as is Zhao herself for director, screenplay and editing). Despite not being able to see McDormand work her magic on a larger-than-life screen, it will nonetheless haunt you.

How to watch: Hulu

“Minari,” a delicate drama from Lee Isaac Chung, follows a South Korean immigrant family in pursuit of their American dream; it’s a deeply personal film for Chung, who drew on memories of his own ‘80s Arkansas childhood. In another year, a film this quiet might have easily been overlooked, but luckily we can call “Minari” a pandemic gift.

The film received six nominations (including a best actor nod for Steven Yeun, the first Asian actor ever nominated in the category) and an ever-growing audience; it’s a gentle love letter both to Chung’s family, and to ours.

The British film “The Father,” directed by Florian Zeller (based on his play), is a very different kind of family drama — a devastating, artful portrait of a man slipping away.

Anthony (a masterful Anthony Hopkins, nominated for best actor), struggling with early stages of dementia, has moved in with his daughter Anne (Olivia Colman, nominated for supporting actress) and we watch as he desperately tries to impose order and control on a life that increasingly seems unfamiliar.

Zeller puts us directly inside Anthony’s confusion: Familiar faces suddenly seem to be strangers (literally, because clever casting changes that keep us confused as well) as his life becomes a frightening hall of mirrors. By its heartbreaking ending, “The Father” has taken us on a painful journey well worth taking, and reminded us that Hopkins — making his character vulnerable yet lionlike, fading away yet fighting to stay visible — is among the greatest of screen actors.

“Sound of Metal,” from first-time feature filmmaker Darius Marder, likewise shows us a central character trying to find his way through a major life change.

Ruben (best actor nominee Riz Ahmed) is a punk-metal drummer who is horrified one day to realize that he has experienced significant hearing loss. This movie made good use of sound, letting us hear things the way Ruben hears them: the eerily vibrating silence, the faraway quality of the voices, the way he flails away on his drums, desperately trying to make a noise he can hear.

Unfolding slowly and deliberately, the film becomes a showcase for a beautifully nuanced performance by Ahmed, and a reminder of the importance of finding moments of stillness.

How to watch: Amazon Prime Video

David Fincher’s black-and-white tale of Old Hollywood (its title character, Herman J. Mankiewicz, is the screenwriter of “Citizen Kane”) is simultaneously impressiveand disappointing. The film is clearly a labor of love for Fincher, whose meticulous devotion to the period (World War II-era Hollywood) is evident in every soft-gray frame — and the more you know about old movies in general and “Citizen Kane” specifically, the more you’ll enjoy spotting the many affectionate references Fincher throws in.

But ultimately, “Mank” felt like an overlong exercise in style, never quite making the case for its central character (played by a nominated Gary Oldman) being worthy of such a tribute. Maybe I need to watch it a few more times.

“Mank” received 10 nominations, more than any other movie.

How to watch: Netflix

The audacious, candy-bright and wicked-dark thriller “Promising Young Woman,” written and directed by Emerald Fennell, is the sort of movie — unlike “Mank” — that the Academy usually would never honor.

A metallic shriek of a film, it stars Carey Mulligan (nominated for best actress) as a young woman determined to seek vengeance for an act that the movie takes its time revealing to us, putting herself into danger by pretending to be drunk in bars and going home with strange men.

“Promising Young Woman” is fierce, feminist and not perfect. Its playful tone occasionally slips off the precipice on which it dances. It’s good that the Academy made room for this film, and particularly for Mulligan’s sly yet heartbreaking performance.

‘The Trial of the Chicago 7’

Aaron Sorkin’s “The Trial of the Chicago 7,” like typical Sorkin fare, is crammed full of rapid-fire dialogue, to such an extent that watching it is occasionally exhausting, longer than it needs to be and slyly entertaining.

Some of it feels all too scripted (the rousing final speech by Eddie Redmayne’s Tom Hayden is a Sorkin invention), but a lot of it is an accurate representation of a remarkably theatrical event: the aftermath of anti-war demonstrations during the 1968 Democratic National Convention, when eight defendants were put on trial.

The cast, particularly Sacha Baron Cohen as Abbie Hoffman, is skilled, the subject matter feels timely and the movie works well on a small screen — the diminution calms things down a bit.

How to watch: Netflix

‘Judas and the Black Messiah’

Shaka King’s “Judas and the Black Messiah” is not currently available for streaming. A.O. Scott of The New York Times called it a “tense, methodical historical drama,” in which LaKeith Stanfield (nominated for supporting actor) plays real-life character Bill O’Neal, at once head of security for the Black Panther Party in Chicago and paid informant for the FBI. Stanfield will be up against castmate Daniel Kaluuya, who plays Illinois Black Panthers head Fred Hampton; the film is also nominated for best screenplay, cinematography and original song.

The Oscars will be handed out in what organizers say will be a limited-attendance, in-person ceremony at the Dolby Theatre in Los Angeles — a fitting end to a movie year in which, to sadly paraphrase Norma Desmond in “Sunset Boulevard,” the pictures all got small.

It didn’t take “Barb and Star Go to Vista Del Mar” long to get to the DVD market.

REVIEW: 'Godzilla vs. Kong' makes you want to go to a theater

King Kong breaks the glass ceiling in “Godzilla vs. Kong.” He also reveals how sworn enemies can join forces when bigger threats are at play.

Will the Oscars be a 'who cares' moment as ratings dive?

Awards shows have suffered since the coronavirus shuttered theaters and shut down live performances. But the ratings slide for awards nights began well before COVID-19 took over.

Godzilla vs. Kong: A functional morphologist uses science to pick a winner

Hollywood has picked a winner, but what does the science say?

Fans must have felt they waited too long to see “Wonder Woman 1984.” They were more than open with their criticism, suggesting it lacked plenty and didn’t live up to the first film.

“French Exit” raises an “end-of-life” conversation but it never gets past the introductions.

Like an innocuous kid version of “The Purge,” Miguel Arteta’s “Yes Day” imagines an annual 24-hour holiday of lawlessness.

What do the Screen Actors Guild awards mean for the Oscars? The latest 'Just to be Nominated' podcast is here to help!

'Just to be Nominated' is hosted and produced by Chris Lay, the podcast operations manager for Lee, along with Bruce Miller, the editor of the Sioux City Journal, and Jared McNett, a reporter for the Globe Gazette in Mason City, Iowa.

REVIEW: Tom Holland gets an audition reel out of 'Cherry'

“Cherry” is like an audition reel for “Spider-Man” actor Tom Holland. The film showcases him in so many different ways you’re never quite sure what it’s trying to be.

Frances McDormand in a scene from the film "Nomadland."

Olivia Colman as Anne and Anthony Hopkins as Anthony in a scene from "The Father."

Riz Ahmed in a scene from "Sound of Metal."

Gary Oldman as Herman Mankiewicz in a scene from "Mank."

Carey Mulligan in a scene from the film "Promising Young Woman."

Yahya Abdul-Mateen II as Bobby Seale, Ben Shenkman as Leonard Weinglass, Mark Rylance as William Kuntsler, Eddie Redmayne as Tom Hayden, Alex Sharp as Rennie Davis in a scene from "The Trial of the Chicago 7."

LaKeith Stanfield and Daniel Kaluuya in "Judas and the Black Messiah."