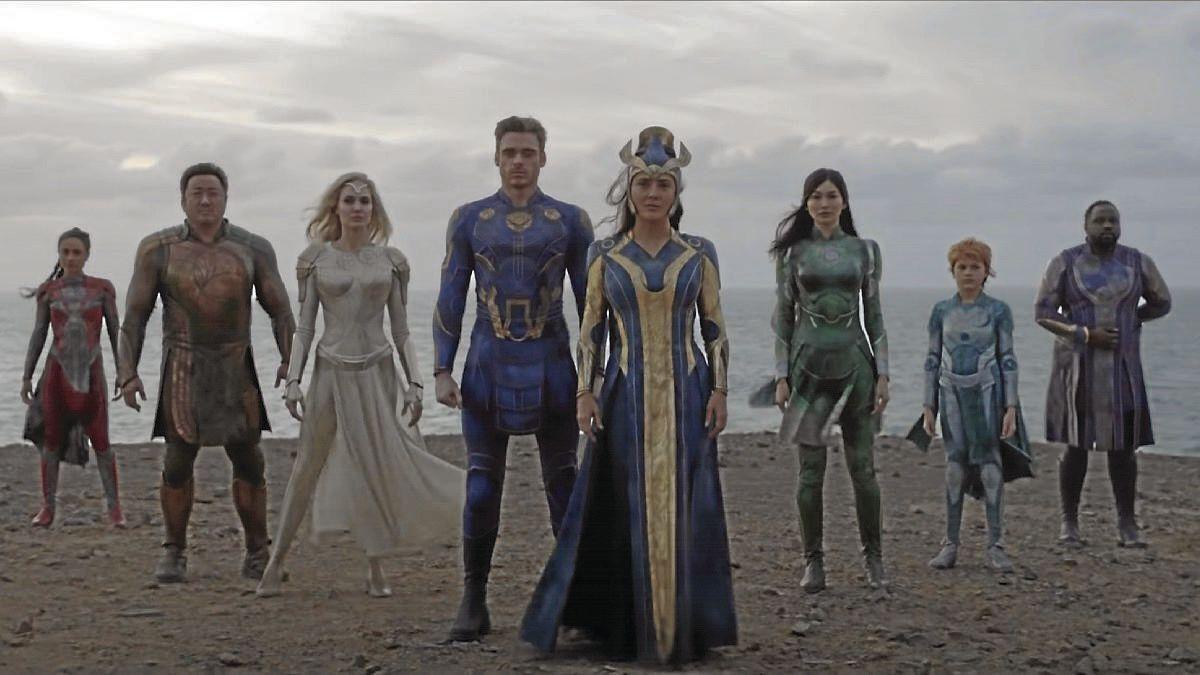 A scene from “Eternals.” 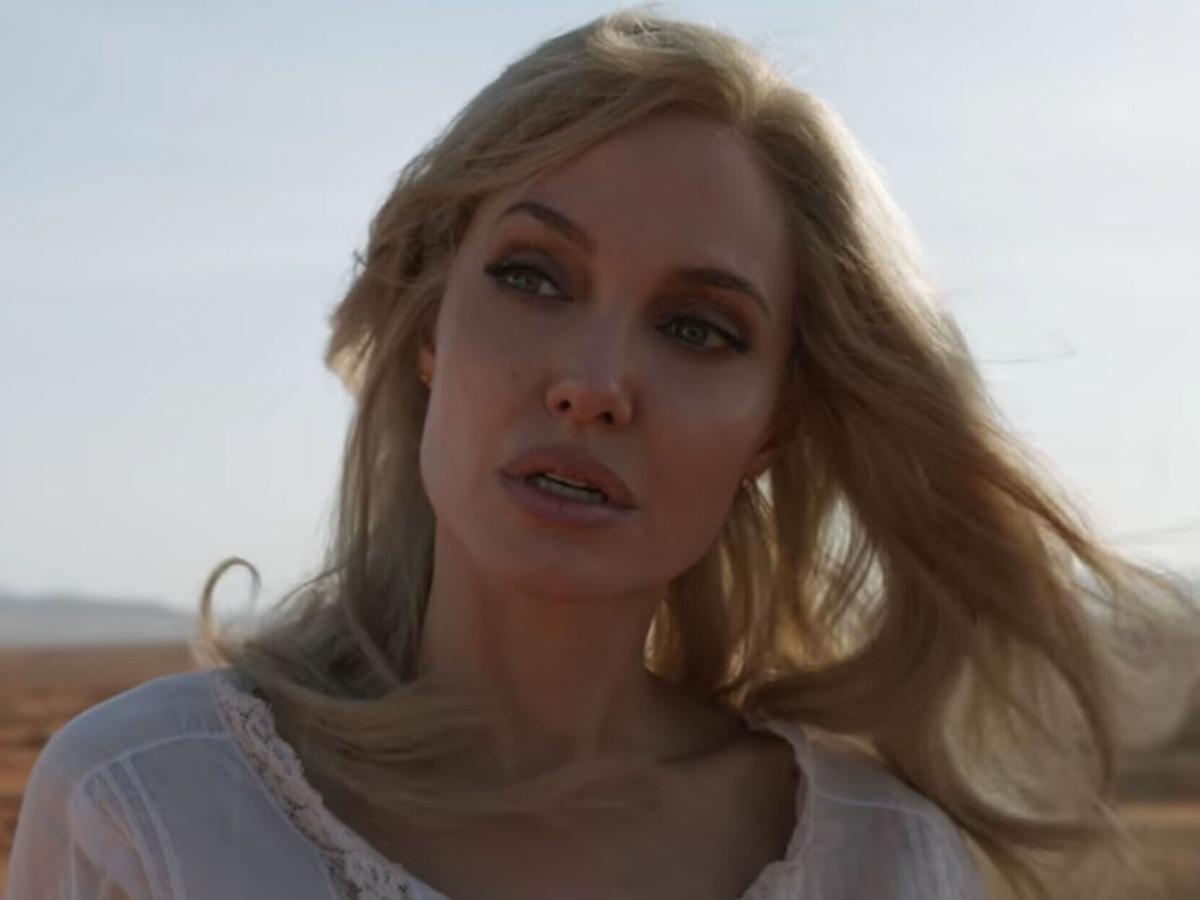 Angelina Jolie in a scene from "The Eternals."

So, what happens when you hand a massive Marvel Cinematic Universe movie to a brilliant maker of small-scale, meditative independent movies? Something different, it turns out — not always in a good way, but definitely something fresh, and maybe that’s what the MCU needs right now.

Chloé Zhao’s “Eternals” has its flaws; in a nutshell, it’s too long (very few movies, superhero or otherwise, can justify breaking the 2.5-hour mark), it’s got some pretty slow spots mid-film, and it’s desperately in need of a bit more wit. Maybe it’s hard to have much of a sense of fun when you’ve been around for thousands of years, as this movie’s main characters have.

But what it does have is a palpable, artful mood; this is a movie full of superheroes who spend time thinking and feeling, and of special effects that aren’t just zippy but often delicately elegant. If that’s not a phrase you’ve heard applied to a comic-book movie before ... well, like I said, this one’s a little different.

A more-or-less stand-alone MCU installment (with a few in-jokes for the hard-core fans, who should definitely stick around for two post-credit scenes about which I’ll breathe not a whit), “Eternals” takes place in multiple time periods. It unfolds simultaneously in the present, in which a far-flung band must reunite when alien predators called Deviants begin to attack humanity, and throughout the past, as we revisit numerous key moments in the group’s history. And it’s a very long history: 7,000 years.

Essentially, the Eternals are immortal aliens, living among humans — like vampires, but minus the biting and plus a strong social conscience — and charged with protecting the world. There are 10 of them, all new to MCU movies and all with their own special powers.

It’s a remarkable group for a superhero movie in that they look like all of us: diverse in gender (this is the first Marvel movie with an equal number of male and female heroes), race, age, sexuality, nationality and ability. (Not that they really look like all of us. Any group fronted by the likes of Gemma Chan, Angelina Jolie, Salma Hayek and Richard Madden has an obvious extra superpower: bone structure.)

Zhao brings a creative eye to the action sequences: I loved an early London scene in which a red bus suddenly becomes reduced to crimson confetti, floating like leaves in an autumn wind. The Deviants look like enormous lizards whose very skin seems to be dangerously fraying; they’re both fanciful and menacing (pity most of the scenes they’re in are so murky, though). The golden, rune-like figures that elaborately encircle the Eternals as they don their warrior garb are poetry in motion.

And it’s fun getting to know this crowd and seeing their personalities and back stories slowly emerge: the on-and-off love affair between Chan’s soulful Sersi and Madden’s more mercurial Ikarus; wisecracking Kingo (a delightful Kumail Nanjiani, this movie’s not-so-secret comedy weapon), who’s been living as a Bollywood star; childlike Sprite (Lia McHugh), who appropriately has a Peter Pan-ish haircut; warrior Thena (Jolie), who moves with balletic grace; cerebral Phastos (Brian Tyree Henry), whose mind we can see as it sketches visions in the air.

For all the nuance that Zhao brings, “Eternals” is still a superhero movie, with all the pleasures and limitations of that genre. The screenplay, credited to four writers, has some flat spots and awkward dialogue, and there’s a lot of superhero-ish standing around, with the Eternals posing in their beautiful warrior outfits like they’re shooting an album cover.

It’s a long sit, but a day later I find myself still thinking about Chan’s quiet, mesmerizing presence at the film’s center, and how Zhao had the confidence to let that performance speak so softly. It’s a different kind of superhero movie; not to everyone’s taste, but made for us all.

What was Meghan Markle’s first impressions of Kate Middleton?

What was Meghan Markle’s first impressions of Kate Middleton?

Madonna gets her third tattoo, completing her tattoo trilogy

Madonna gets her third tattoo, completing her tattoo trilogy

This Thanksgiving weekend is offering a box office feast with two genres that have been lacking on the menu so far this year: family movies and non-franchise films aimed at adults.

Director Jason Reitman chooses to take on what could be called a difficult juggling act in “Ghostbusters: Afterlife.”

Here's a list of films set to premiere this holiday season through Jan. 28.

Here's a closer look at a few family-friendly films that are coming to screens this week.

Movie review: Will Smith aces role as father of Venus and Serena Williams in ‘King Richard’

Of all of Will Smith’s performances over the years, the role of Richard Williams in “King Richard” may be the most memorable — primarily for w…

RiverRun to present “Theirs is the Kingdom” in Virtual Theater

The RiverRun International Film Festival will offer “Theirs is the Kingdom” in its Virtual Theater Nov. 12-29 as part of RiverRun Rewind — return engagements of festival favorites.

A scene from “Eternals.”

Angelina Jolie in a scene from "The Eternals."