Chris Zaluski heard about a fresco project at a small church in Asheville in the fall of 2017 and started his first filming session several months later.

“I hadn’t heard of the church, but I thought it was a pretty novel idea that they were going to make a fresco painting in their sanctuary and not paint a traditional biblical scene, but paint people in the Asheville community battling homelessness, addiction, mental illness,” Zaluski said. His documentary, “Theirs is the Kingdom,” follows the creation of that contemporary fresco inside the sanctuary of Haywood Street Congregation, examining the intersection of poverty and portraiture.

The film screened at the 2021 RiverRun International film Festival in Winston-Salem. It was one of the few in-person screenings that year.

In late 2021, RiverRun offered “Theirs is the Kingdom” in its Virtual Theater as part of RiverRun Rewind — return engagements of festival favorites.

“Theirs is the Kingdom” screened at about 20 festivals in 2021. This year, it aired in April on PBS and has screened on the World Channel.

“It’s already screened on about 85% of PBS stations around the country,” Zaluski said.

“Theirs is the Kingdom” is now available on Amazon Prime, Google Play, Apple TV and YouTube.

Zaluski’s first big film was “Wagonmasters,” a documentary about the cultural history of the station wagon in America and station-wagon lovers. The film screened at the 2013 International RiverRun Film Festival. Zaluski made the film while he was in graduate school at Wake Forest University. He directed the film with Sam Smartt, a graduate of Wake.

He also directed “Impetus to Desegregate,” which was made in conjunction with the Office of Diversity & Inclusion at Wake Forest University.

“That was about the first black student who came to Wake and desegregated Wake,” Zaluski said.

“It is about a young couple who were attempting to build a home out of a shipping container as a way to avoid rising living expenses and home costs,” Zaluski said.

He said he is fortunate that all of his films were chosen to be screened at RiverRun.

Born in Canton, Ohio, Zaluski came to North Carolina to study journalism at Appalachian State University, where he graduated in 2008. He went on to become a journalist in the newspaper business and ended up doing a lot of multimedia reporting and creating videos.

Q: How would you describe your filmmaking?

Answer: How I arrived to be a documentary filmmaker is a big part of my filmmaking process. It informs how I look at stories and how I approach potential subjects, and it’s also a mold I’ve been trying to break out of recently, too.

For me, filmmaking has always been a story-driven pursuit. Growing up, I never thought of filmmaking as a career. I had always wanted to be a newspaper reporter and that’s what I did right out of college. But the more I worked in that area, the more I was pushed toward multimedia reporting, which then turned into video reporting – and that really started to pique my interest into documentary filmmaking.

I think that experience shaped my filmmaking in two ways. First, I’m always focused on the story first and foremost: Who is doing what? Why are they doing it? What’s at stake? Secondly, because of the low budget nature of newsrooms, I was used to doing all aspects of production on my documentaries – from the preproduction to the filming to the editing process. As such, I love gritty, verite-style documentaries that really feel authentic and genuine. Unfortunately, those are becoming harder to find on mainstream platforms, but I just feel there’s a real authenticity to that style of documentary filmmaking that I try to emulate in my films.

Q: How have you evolved as a filmmaker?

Answer: When I started making documentaries, I was very focused on removing myself as the filmmaker from the final film. I wanted the subjects’ stories to be the driving force of the film, and I didn’t want to manipulate that in any way. I’ve come to realize, however, that any film – documentary, especially – is riddled with manipulation, and there’s absolutely nothing wrong with that. I think this is where my journalism background – this desire to always be objective – had to be broken a little bit.

In my most recent film – “Theirs Is The Kingdom” – I tried to be more overt with the editing as well as more hands-on with directing the scenes during the actual production. I like the balance I struck between a very stylized scene mixed with a more gritty, traditional scene.

Another way I’m constantly evolving as a filmmaker is through my teaching. I teach in the Wake Forest University Documentary Film Program, and it’s always refreshing to see what emerging filmmakers are watching and creating – and then how those changing interpretations of “documentary” are influencing the field.

Q: Who has influenced your filmmaking?

Answer: I’m constantly influenced by the work of my colleagues and peers – other independent filmmakers who are making the types of projects I enjoy. I don’t really have a favorite documentary filmmaker, though. I think there are some documentaries that I go back to a lot for inspiration – “Rivers and Tides,” “Harlan County USA,” “Cutie and the Boxer” – that speak to me for a variety of reasons.

I also love listening to podcasts, and I think there are some really wonderful storytellers in that space, including Ira Glass of “This American Life.”

Answer: I have two little girls, and I’m a full-time professor, so time management is always a big challenge. Also, the types of documentaries I like to make take a long time. My most recent film was about a three-year process. With that in mind, I have to be really thoughtful about the types of projects I take on. Also, money and funding is always a challenge with any artform, just making sure I don’t agree to a project where I won’t be able to raise the funds necessary to complete it. But more than anything, it’s a challenge of time.

Q: What does filmmaking do for you?

Answer: It expands my world. I’m able to talk with people, emerge myself in situations, and learn about new ideas in a much deeper way than I would have otherwise been able to had I not been a filmmaker. And then the same thing happens when I watch documentaries – and that’s the beauty of the craft. I can be sitting on my couch in Winston-Salem and learn about a very powerful story thousands of miles away – and then I keep thinking of that story in the days and weeks after I watched the film. It changes how I see the world and how I interact with the world.

Q: Any advice for other filmmakers?

The second thing I would say is that it’s hard to make a film in a silo. Filmmaking is a field that requires collaboration and interpersonal relationships. You have to surround yourself with talented people and then trust their talents.

Finally, filmmaking – especially documentary – is a craft that takes a long time, so you need to have a real sustained passion for what you’re doing.

What: “Theirs Is the Kingdom” directed by Chris Zaluski

WATCH NOW: Chris Zaluski speak about documentary film ‘Theirs is the Kingdom’

WATCH NOW: 'Theirs is the Kingdom' trailer

At the intersection of poverty and portraiture, “Theirs is the Kingdom” follows the rare creation of a contemporary fresco mural inside the sa…

'Game of Thrones' fans! Here's your chance to sit on the Iron Throne

New exhibition in Seattle is a must for Bruce Lee fans

New exhibition in Seattle is a must for Bruce Lee fans

Taylor Swift responds to 'Shake It Off' lawsuit

Taylor Swift responds to 'Shake It Off' lawsuit 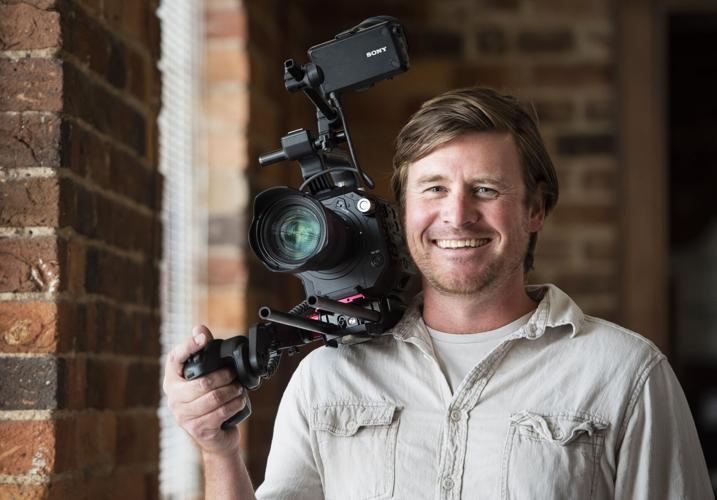 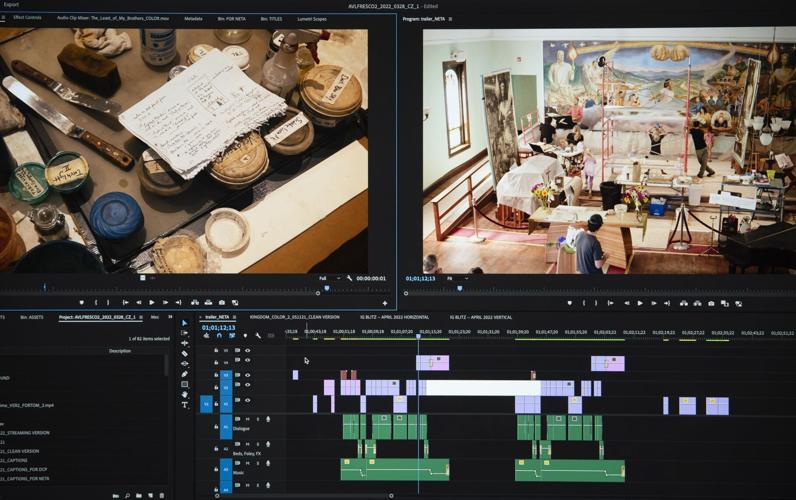 Zaluski pulls up his editing dashboard, which displays some of the materials used to paint the mural (top left) and a work in progress from the last day of painting. (top right). 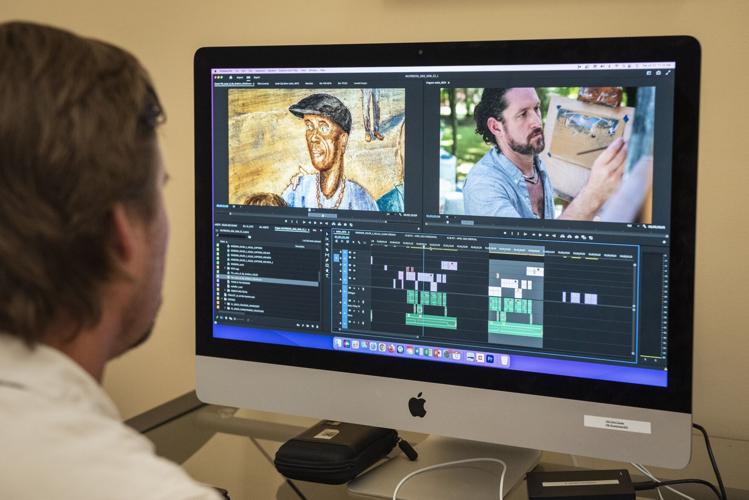 Chris Zaluski pulls up his editing dashboard on Adobe Premiere Pro. In the editing dashboard, you can see one of the approximately 30 models who was depicted in the mural (top left) and the mural artist, Christopher Holt, at work (top right).