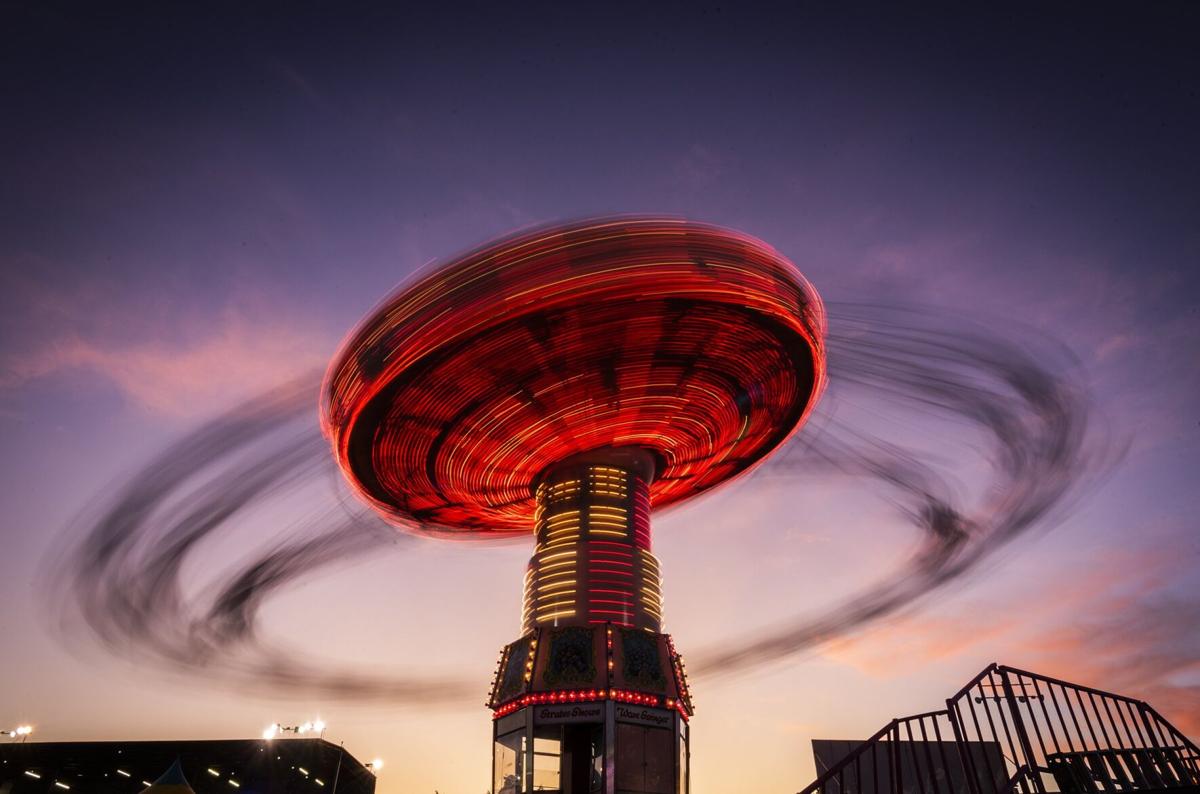 The Wave Swinger at the Dixie Classic Fair. The fair will have the same 55 rides that were featured in 2019, including Enterprise, Fireball, Himalaya, Zipper and Skyflyer. 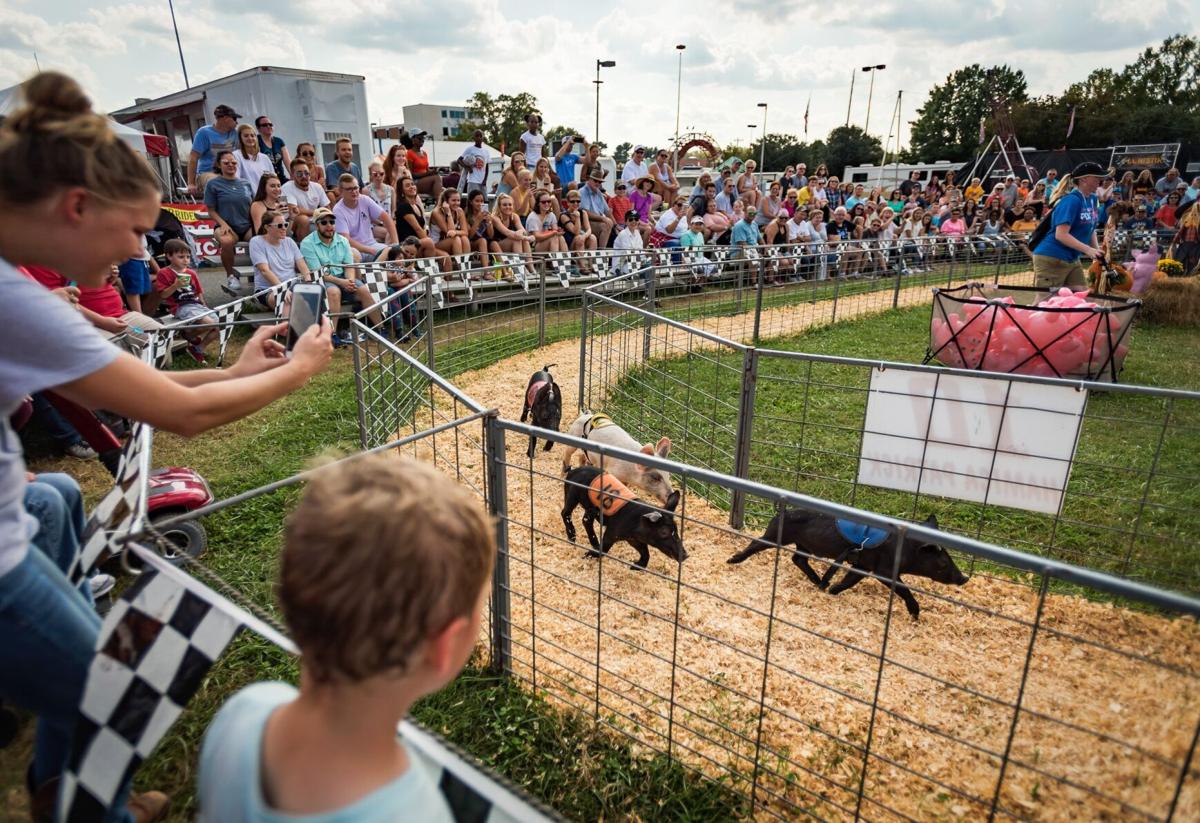 Rookie pigs race around the track for the crowd during a Hogway Speedway Racing Pigs, Ducks and Goats event Friday on Oct. 5, 2018. 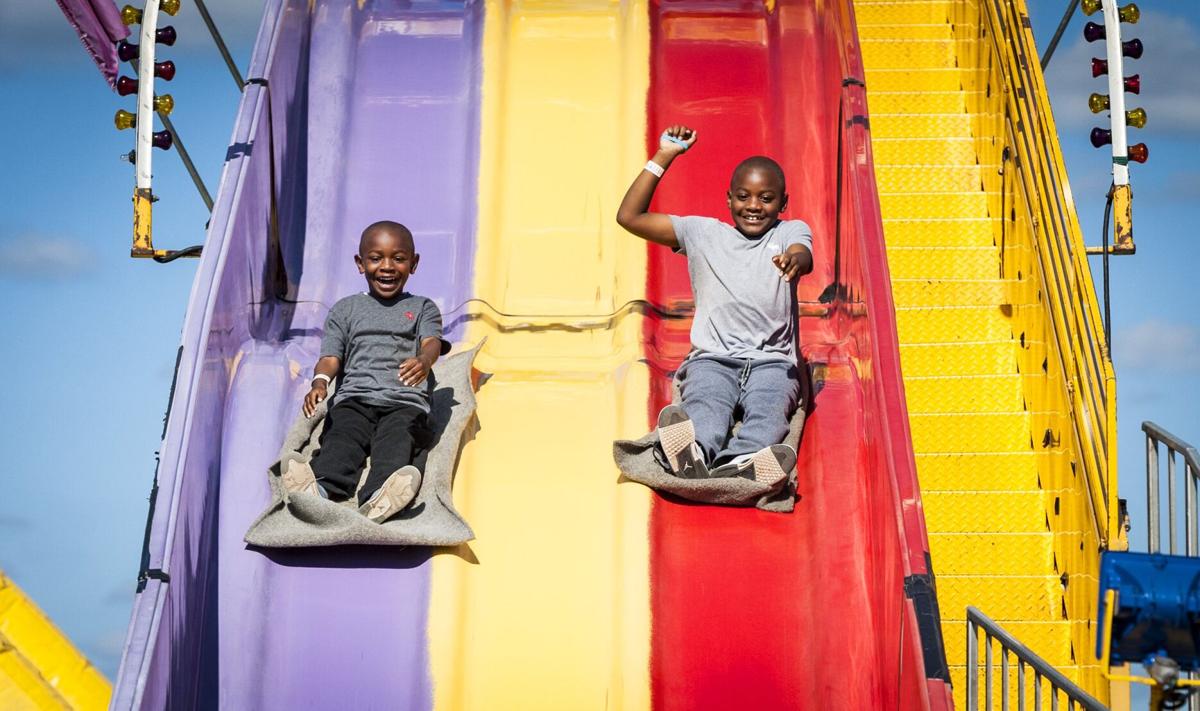 Brothers, from left, Jarrett and Isaiah Bufford enjoy the Super Slide on the final day of the fair in 2015. 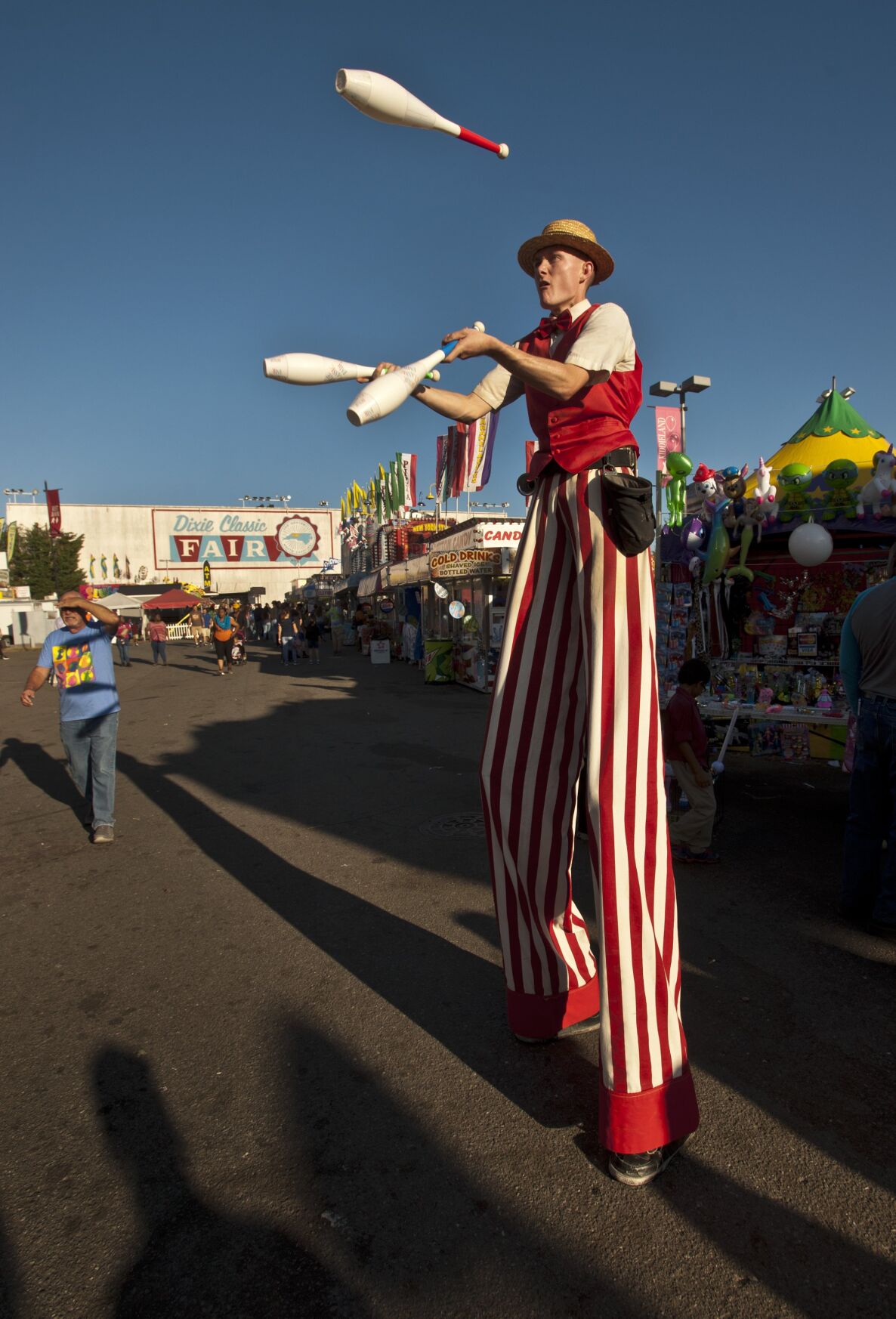 Stilt walker Sky High Skyler juggles in the concession area between the West Gate and the Grandstand at the fair in 2019. 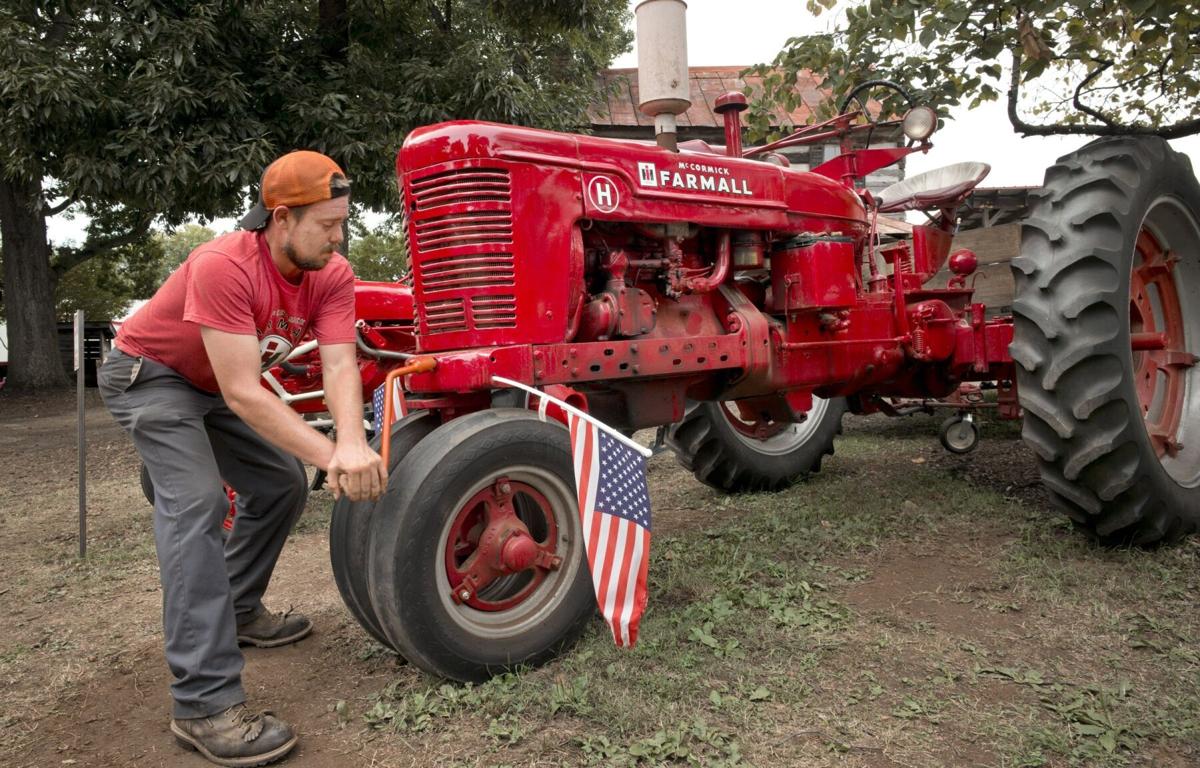 Andrew Norton uses a hand crank to turn over his restored 1946 Model H Farmall tractor on display at the fair in 2017. 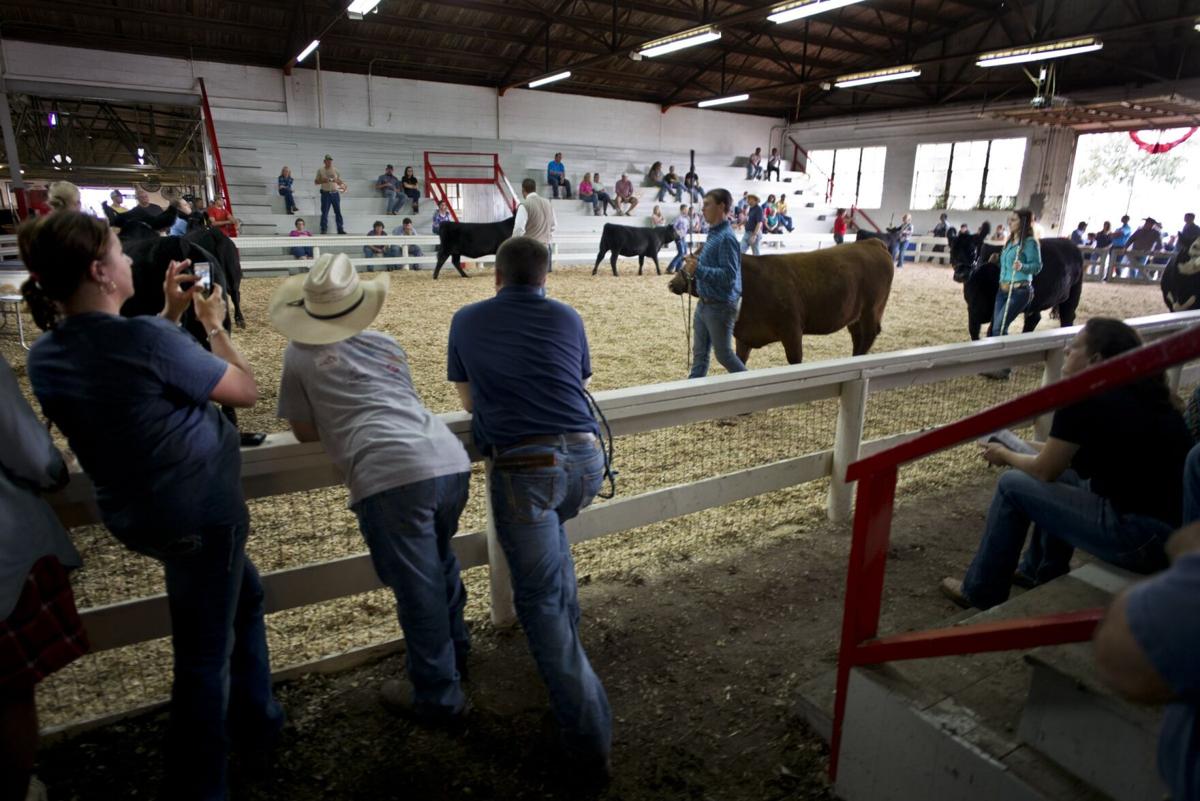 Candy Branch (left), of Elkin, sets up to snap a smartphone picture of her 19-year-old daughter, Morgan, (right) during the commercial class showing at the fair in 2017. 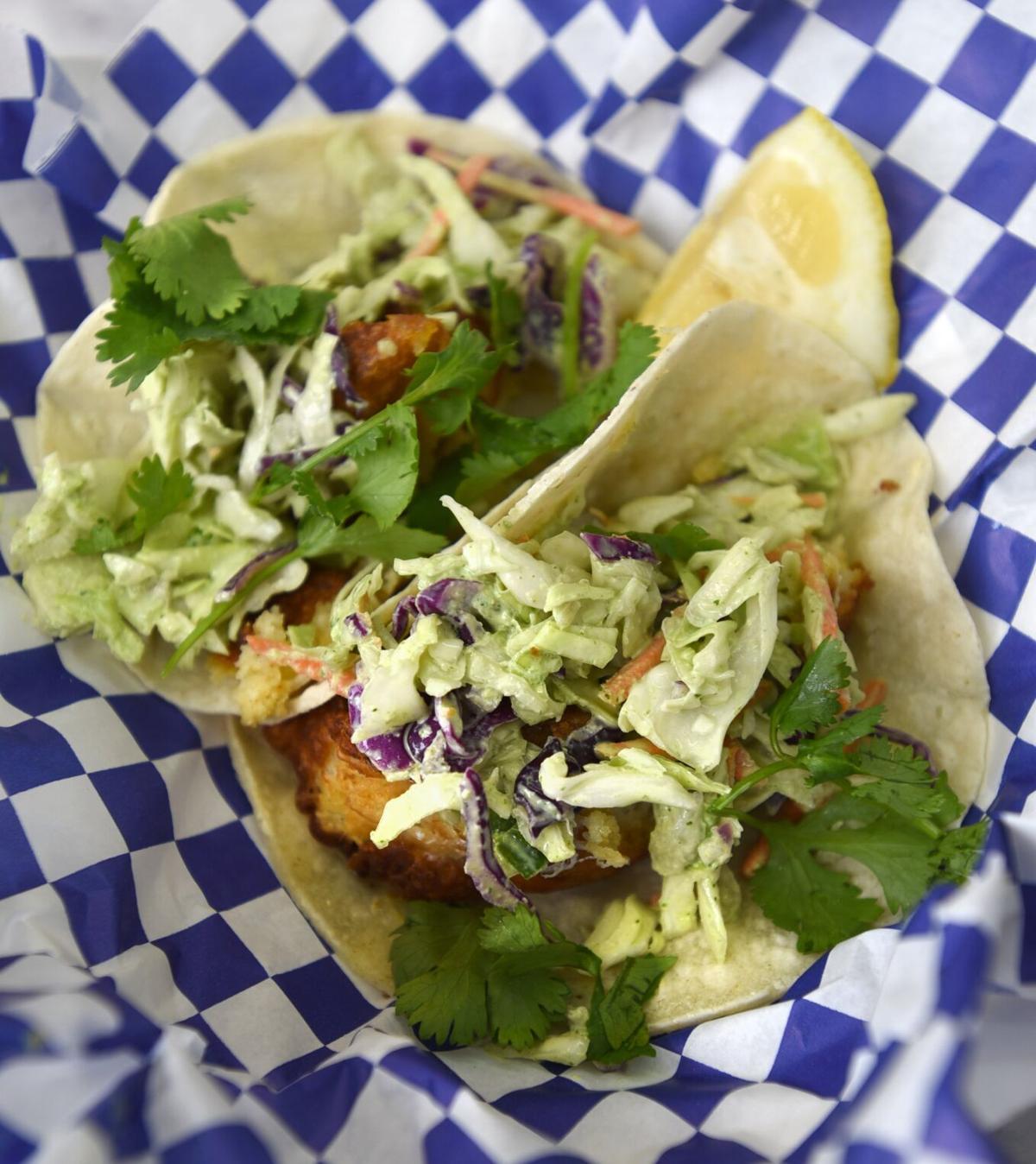 Fish Tacos from C&H Concessions at the fair in 2018.

Fairgoers will get more than a taste of the Carolina Classic Fair this year when the annual event moves into full swing Oct. 1-10.

In 2020, because of the coronavirus pandemic, the fair offered a drive-thru experience with a limited selection of favorite fair foods.

“We did that as part of a community effort for folks who were missing the fair and still wanted to have food and some kind of fair experience,” said Robert Mulhearn, public facilities manager for the City of Winston-Salem. “We put that together, and we enjoyed doing it, but we’re definitely happy to have a regular fair.”

Fair officials have been taking note of what’s been happening at other fairs that also returned this year.

“We’ve been following other fairs that are going on, specifically around North Carolina,” Mulhearn said. “They are seeing attendance that’s down, which is probably to be expected, but actual revenues are up — so less people are coming but more of those who are coming are spending more money.”

He expects part of the reason for the increased revenue is pent up demand.

“I think that overall, the notion for the fair is that people are excited,” Mulhearn said. “I think the average person will enjoy it.”

The fair will have the same 55 rides that were featured in 2019, including Enterprise, Fireball, Himalaya, Zipper and Skyflyer.

People can also expect to find their favorite games, exhibits, foods, snacks and beverages that are typically offered at the Carolina Classic Fair.

Fair officials are already posting on social media and the fair’s website about health and safety protocols aimed at keeping fair attendees, exhibitors, concessionaires, volunteers and employees from potential exposure to COVID-19.

They are asking people to answer health and safety questions before entering the fair, to wear masks (required), to avoid congregating with members outside their admission party and to have fun and stay safe.

“We want folks to be as safe as possible,” Mulhearn said. “I think folks understand when they can and can’t wear their masks. We’re going to rely on them to uphold that.”

The fair states on its website: “It is understood and within reason that patrons on the fairgrounds may not need to wear masks for circumstantial reasons, such as eating, drinking and for other religious or health circumstances or children ages 2 and under.”

In terms of enforcement of the guidelines, Mulhearn said, “If it becomes a disturbance, that’s when fair staff and law enforcement would get involved.”

Hand sanitizer stations will be available at the gates and throughout the fairgrounds.

On Oct. 4, Color Me Badd, an American contemporary R&B group, and Tag Team will take the stage as the fair’s first concerts in the Grandstand. The concert is presented by 97.1 QMG.

Color Me Badd’s hit songs include “I Adore Mi Amor,” “I Wanna Sex You Up” and “All for Love.”

Most recently, Tag Team has been a hit in the Geico Insurance commercial singing “Scoop! There it is! Scoop!,” which probably brings back memories for many viewers of Tag Team’s “Whoomp! (There It is)” song that was released in 1993.

The other concerts will be Walker Hayes and Cooper Alan on Oct. 5, presented by 93.1 Wolf, and Andrew Ripp and Baylor Wilson on Oct. 6, presented by WBFJ.

Walker Hayes is an American pop country singer who has charted three Billboard Hot Country Songs singles, including “You Broke Up with Me.” Cooper Alan is a native of Winston-Salem. His latest song is ”Colt 45 Country Remix.”

“Both of them are famous on TikTok,” DJ Hargrave, event and branding manager for the Winston-Salem Fairgrounds, said of Hayes and Alan. “Walker Hayes is popular for a song that went viral on TikTok called ‘Fancy Like.’”

Andrew Ripp is an American singer and Grammy-nominated songwriter based in Nashville, Tenn. Baylor Wilson is a rising country musician.

Various musical acts are scheduled at the clock tower stage.

Oct. 1 will feature Hispanic Heritage Night at the Fredericks, including music artist Grande Gato aka J.O.T. Gospelfest is scheduled for Oct. 3, and the clock tower stage performances will close out Oct. 10 with Jazz Fest.

New this year is the Sports Zone and The Beer Garden.

“Some of the teams will have cardboard cutouts of players,” Hargrave said. “Some will have engaging games for kids to play. This will highlight some of the local sports teams and give them a chance to engage with the public.”

This is the first year the fair will have the AMB (Appalachian Mountain Brewery) Beer Garden, where beer will be served daily from 11 a.m. to 10 p.m.

Another beer garden in the Grandstand will feature local breweries, except for Oct. 6.

New roaming grounds acts are Robocars, which are humans that will “transform” into vehicles; and Animal Cracker Conspiracy, a touring stilt-dancing performance company in which performers will walk around the fair dressed as animals.

The animal exhibits and petting zoo that includes cows, chickens and goats are back, but a new educational exhibit will feature bears this year.

In addition, a busker, which is a street performer, will set up at the front gate.

“He will also bring an interactive drum kit for children to play, and he will have some educational signage about busking,” Mulhearn said.

Hargrave added that the aim of the busker, Melvin Moungle, who is from Charlotte, is “breaking the stereotype of street performers.”

To navigate around the fair, Mulhearn advised that people download the Carolina Classic Fair’s new app on their Apple or Android smartphones from the Apple App store or the Google Play store.

At the clock tower stage:

Neil Young told Spotify to remove his music from the service, accusing it of providing Joe Rogan with a platform to spread COVID vaccine misinformation.

Diggin' in the Crates Hip Hop Podcast has opened Black-owned performance art spaces at 1400 Battleground Ave. and 1300 Westover Terrace. Aside from producing podcasts, it offers affordable space for creatives to work on their craft.

Rhiannon Giddens returns to Greensboro for lead in 'Porgy and Bess'

International singer, songwriter and multi-instrumentalist Rhiannon Giddens returns to her hometown to perform in "Porgy and Bess" with Greensboro Opera.

Stuart returns to The Ramkat on Jan. 21 with His Fabulous Superlatives, his longtime band. Caleb Caudle, a local favorite son, who will make his debut MerleFest appearance in April, will open the show.

There can never be too much good music, but too much music may be another matter.

EVENING OF MUSIC: The Yadkin Arts Council and the Blue Ridge Music Center have teamed up to bring The Harris Brothers and The Burnett Sisters …

When Tony Rice put his hands on a guitar, the instrument was transformed. It became a a time capsule, a vessel containing the purest essence o…

Bob Dylan is the latest artist to sell his music catalog. The musician's $200 million deal with Sony Music Entertainment announced Monday will give the company rights to all of Dylan's recorded music since 1962.

The Wave Swinger at the Dixie Classic Fair. The fair will have the same 55 rides that were featured in 2019, including Enterprise, Fireball, Himalaya, Zipper and Skyflyer.

Rookie pigs race around the track for the crowd during a Hogway Speedway Racing Pigs, Ducks and Goats event Friday on Oct. 5, 2018.

Brothers, from left, Jarrett and Isaiah Bufford enjoy the Super Slide on the final day of the fair in 2015.

Stilt walker Sky High Skyler juggles in the concession area between the West Gate and the Grandstand at the fair in 2019.

Andrew Norton uses a hand crank to turn over his restored 1946 Model H Farmall tractor on display at the fair in 2017.

Candy Branch (left), of Elkin, sets up to snap a smartphone picture of her 19-year-old daughter, Morgan, (right) during the commercial class showing at the fair in 2017.

Fish Tacos from C&H Concessions at the fair in 2018.