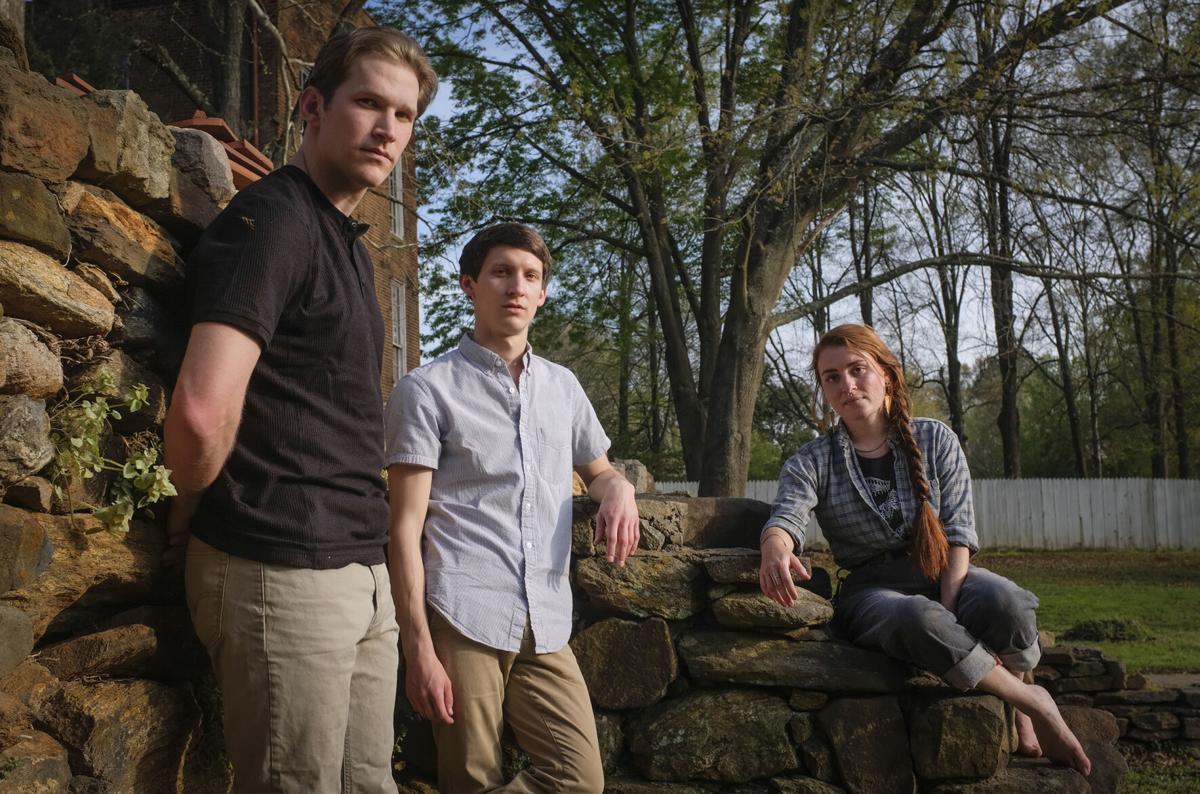 Migrant Birds members are Scott Peters (from left), Spencer Ayscue and Tara Logue. On April 23, the band will release an EP titled “Winters Like These.” The six-song EP is made up of music the Migrant Birds worked on throughout the COVID-19 pandemic. 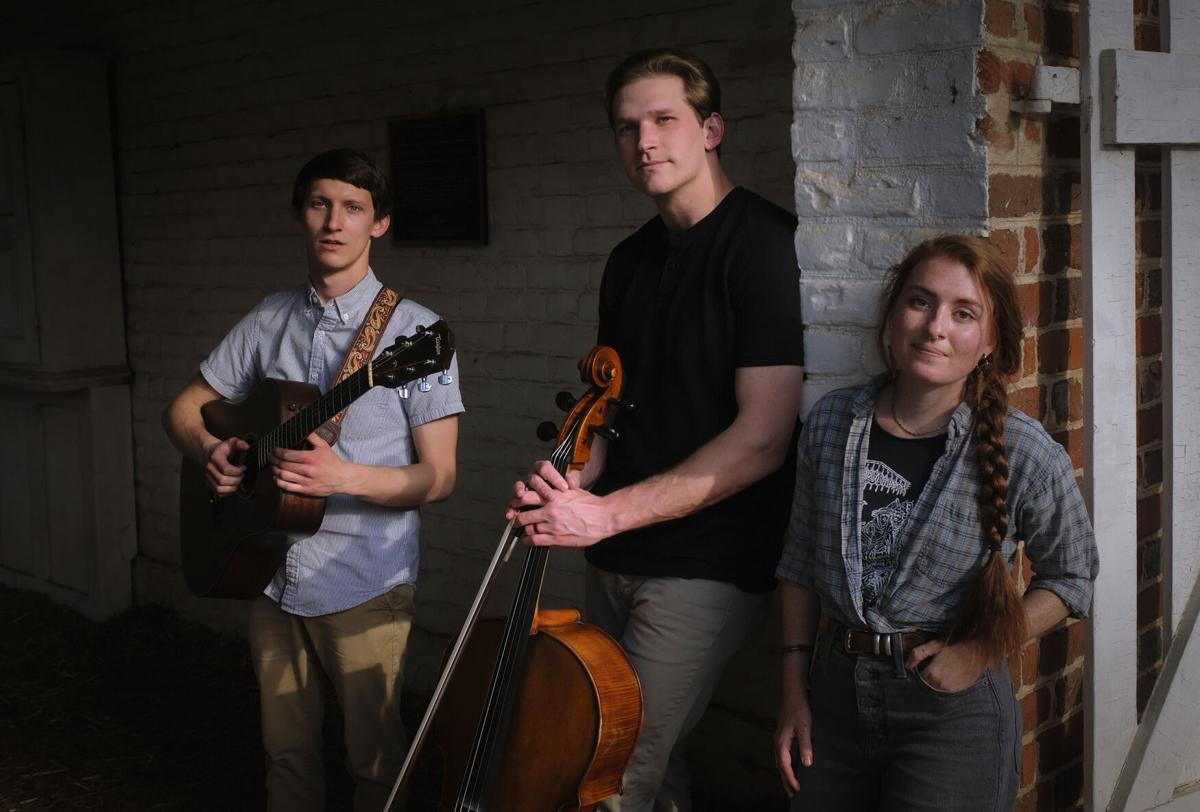 In 2019, when Spencer Ayscue was putting together Migrant Birds, an indie folk and Americana outfit based in Winston-Salem, he initially thought it would be a solo project with backup from fellow singer/songwriter and musician Tara Logue.

Together, they started practicing some of the songs they had written separately while doing their own gigs.

“I played a few solo shows, but I really didn’t enjoy it,” said Ayscue, who had played in other bands previously.

Now, Migrant Birds is made up of Ayscue, Logue and Scott Peters, a cellist who also plays other instruments.

On April 23, the band will release an EP titled “Winters Like These.” The six-song EP is made up of music the Migrant Birds worked on throughout the COVID-19 pandemic and includes the songs “Nothing to Show, “Trying to Be a Stranger” and “Three Strand Cord.”

Ayscue said that despite how complicated things got logistically amid the pandemic, “it inspired and forced us to be very intentional about how we collaborated as musicians during that time. Obviously, the pandemic posed serious challenges to us as a gigging band, but we found ways to continue to grow over the last year nonetheless.”

Migrant Birds plans to celebrate the release of their EP with a livestreamed show April 23 on their Facebook page and another show at Foothills Brewing Tasting Room in Winston-Salem on April 30.

Ayscue, 27, is from Albemarle but now lives in Winston-Salem, where he is also a Spanish teacher at Summit School.

As a child, he sang in church and played piano. He later became interested in drums and guitar. He has been a member of several bands, including Ships at a Distance.

Logue, 30, lives in Kernersville but is originally from Pfafftown. She also grew up singing in church. She picked up the guitar in middle school then the mandolin in college and joined a couple of bands. She has influences in both metal and bluegrass music. She is an education coordinator for Salem Museums & Gardens in Winston-Salem.

She and Ayscue met through a mutual friend.

“We just kind of knew each other from bumping into each other at overlapping gigs,” Logue said.

Peters, who grew up in Atlanta, has a master’s degree in contemporary cello performance from Berklee College of Music in Massachusetts. He moved to Winston-Salem from Nashville, Tenn., in 2019.

He said he has been told he started playing the cello when he was 3 years old.

The band’s name comes from the lyrics in “I Hope I Never Feel This Way Again,” which is one of the songs from its first EP — “Migrant Birds” — released in May 2019.

Initially, when Ayscue and Logue started playing together at bars and breweries, Ayscue had a repertoire of seven or eight of his own songs.

“I would play like half the show by myself, and then I would play the other half with Tara,” he said.

They wrote a lot of songs separately in the beginning.

Logue said, “A lot of it was kind of us just trading songs that we had written individually and then just bringing a song to the band and be like, ‘This is a song I wrote. What do we want to do with it?’ We’re now just moving into doing more of the actual songwriting process collaboratively.”

Ayscue said their approach to song writing is different, depending on the song.

Logue said they have learned to trust each other.

“The main difference is that Spencer knows a lot about music and music theory,” she said. “He’s thinking very technically about what he’s creating, and I don’t really understand music theory at all.

But she said they have complementary interests and a good balance of their skills.

“I really love lyrics, and I really love harmonizing,” she said. “That’s where I’m most at home. And he’s really good at coming up with good arrangements.”

Peters said his style of music is pretty similar to the other members of Migrant Birds.

“I try to put on a lot of different hats though, but recently, all the stuff I’ve been playing is kind of folk Americana, and a little bit of bluegrass here and there when I feel up to it,” Peters said.

He said he is not as involved as Ayscue and Logue are on the writing side.

“I’d say more from the production side of things,” Peters said. “After a song is written, I get in there and mess around.”

In the band, Peters plays cello and bass, Logue is on keyboard and sometimes guitar, while Ayscue plays acoustic and electric guitar.

“I’ve been playing a little bit of mandolin recently, which I enjoy playing, but it doesn’t always fit with what we’re doing,” Ayscue said.

When they play longer gigs, they often do covers of pop and rock songs.

Stuart Ross Johnson, a music producer, engineer and front man for the group Ross Hollow in Indianapolis, has known Ayscue and Logue for quite some time.

He said Ayscue “knows how to arrange parts and be mindful of the different elements in music.”

He said Logue adds “a lot of grit” to the group because of her punk/metal background. “When she writes music, she turns out these sort of Appalachian folk songs,” Johnson said.

He added that that Migrant Birds “has a good, rootsy folk vibe.”

“They’re really autobiographical,” Ayscue said of himself and Logue.

And Migrant Birds is working on more music.

When: EP to be released April 23

Where: Buy Migrant Birds’ singles and EPS at migrantbirds.bandcamp.com and at live shows; available on all streaming platforms and at migrantbirdsmusic.com.

More: Migrant Birds will have a livestreamed show at 8 p.m. April 23 at facebook.com/migrantbirdsmusic; and a free show at Foothills Brewing Tasting Room, 3800 Kimwell Drive in Winston-Salem from 7 to 9 p.m. April 30.

Contemporary Christian band MercyMe will make a stop on their fall tour on Oct. 16 at the Greensboro Coliseum.

Migrant Birds members are Scott Peters (from left), Spencer Ayscue and Tara Logue. On April 23, the band will release an EP titled “Winters Like These.” The six-song EP is made up of music the Migrant Birds worked on throughout the COVID-19 pandemic.