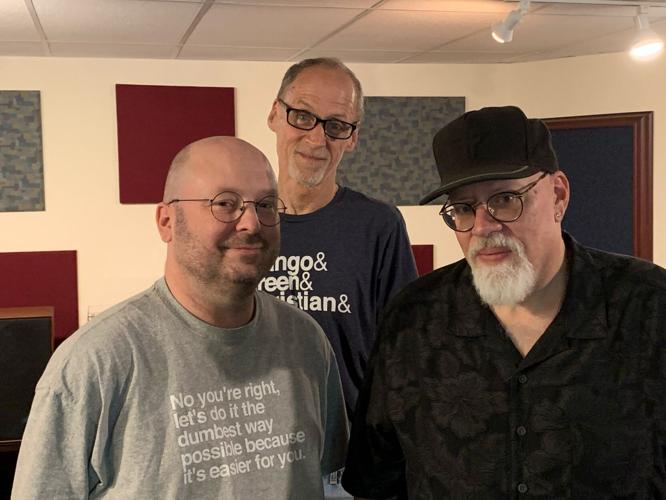 Chris Garges, Rob Slater and Ed Bumgardner played on and produced the album “Be Good to Yourself.” 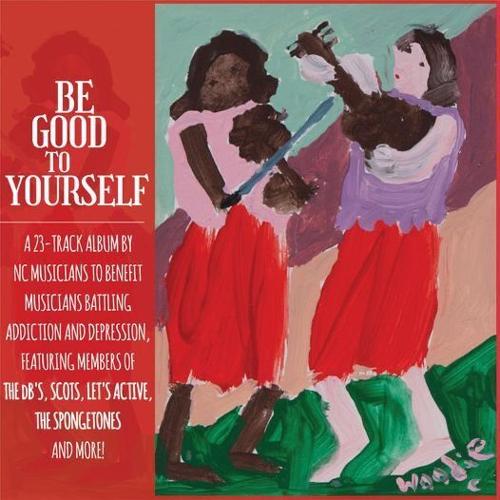 The “Be Good to Yourself” cover art was designed by Woodie Long of Santa Rosa Beach, Fla. 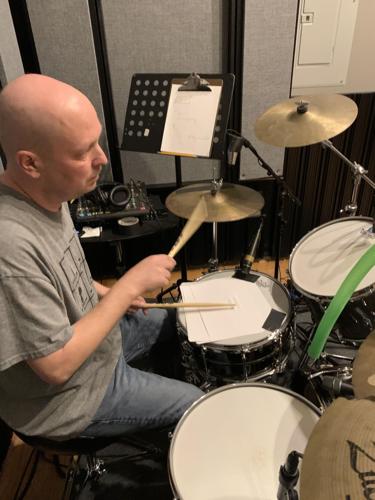 Chris Garges played drums and other instruments on the “Be Good to Yourself” album. 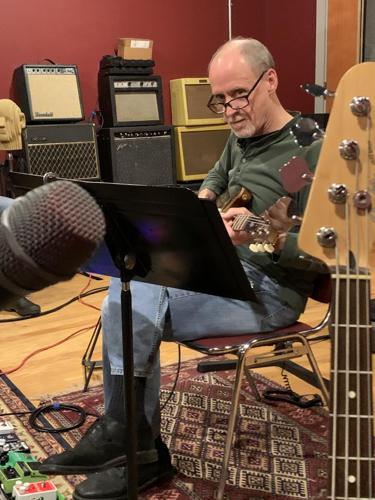 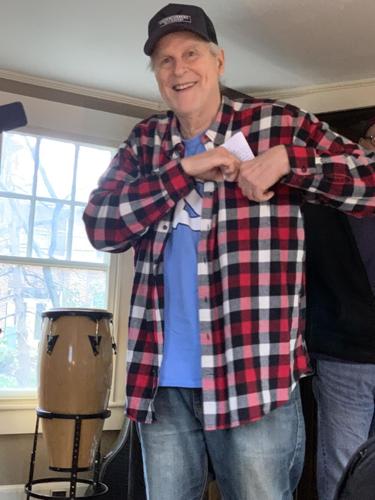 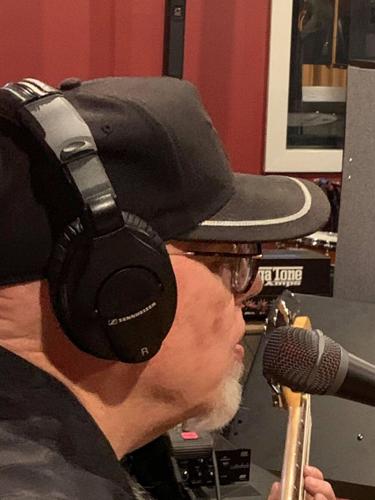 Ed Bumgardner works in the studio.

Ed Bumgardner had had enough of funerals.

“This has gotta stop,” he told himself. “We’ve gotta figure some way out that these people can get help.”

Several friends from the music world had committed suicide or succumbed to substance abuse. Bumgardner, a veteran musician and music journalist, knew that many of them had no insurance and couldn’t afford mental health treatment. So he rounded up some friends to try to do something about it. After two years of work, they have produced “Be Good to Yourself,” a double-CD benefit album (begoodtoyourselfmusic.com).

“This whole thing has been about helping people who for whatever reason can’t help themselves — or don’t know how to get help,” Bumgardner said. “There is an unspoken brotherhood among musicians; it’s a crazy love affair and a deceptively dangerous way of life, filled with extreme ups and down.”

The good deed produced a great album. Many benefit records support a worthy cause with a mediocre collection of songs, often sounding like a Spotify playlist from random artists. By contrast, “Be Good to Yourself” stitches together a unifying theme with a core band backing an all-star cast of North Carolina musicians — and a few ringers from Nashville and beyond.

Members of some of North Carolina’s most storied groups contributed their talents, including the dB’s, Let’s Active, Arrogance, the Spongetones, Southern Culture on the Skids, and Two Dollar Pistols. They joined forces with some of the state’s most talented 21st century artists, including Libby Rodenbough of Mipso, Brett Harris, and several promising newcomers, some still in their teens. Out-of-town guests include Bill Lloyd, who scored country hits in the 1980s in Foster and Lloyd before transitioning to power pop.

Together, they travel through emotional highs and lows, making music that’s by turns riveting, raucous, harrowing and uplifting. Some songs evoke the seductive power of drugs and alcohol, including “Essence” by Lucinda Williams, given a sultry, desperate vibe by Māya Beth Atkins.

“The tracks just kind of percolated from the get-go,” said Rob Slater, who played guitar on the album. He also co-produced it with Bumgardner, who played bass, and Chris Garges, who played drums and other instruments. “Once we heard Māya Beth’s treatment of it, we were really gobsmacked. That was an important tune, because as the first one, that seemed to our ears to work out really, really well. It kind of set the bar. We’d like to think that most everything we did was at least that good.”

Other songs look at the devastation of depression and substance abuse. One example is the 1999 Travis song “Why Does it Always Rain on Me?,” sung exquisitely by Rodenbough — who also layered on her own vocal harmonies and 16 violin and viola parts.

“Right from the start, we wanted to try to tell a story without beating somebody over the head with it,” said Bumgardner, who selected most of the material. The songs come from the worlds of classic rock (the Kinks, Jimi Hendrix) and N.C. indie-pop (unreleased songs by Mitch Easter and Peter Holsapple). There are gems from some of the state’s most adept journeyman tunesmiths (David Childers, Britt “Snuzz” Uzzell) and younger writers, such as Sunshone Still.

John Elderkin of Mad Crush (and formerly the Popes and the Public Good) tackled one of the saddest songs on “Be Good to Yourself.” Winston-Salem native Ben Folds wrote “Late” after singer-songwriter Elliott Smith committed suicide. Elderkin sang it with a nod to a couple of his fallen band mates from the Popes, Jim Rumley and Steve Ruppenthal. He asked his wife and collaborator Joanna Sattin whether she thought it would be OK to revise the lyrics and change a reference to Smith to Ruppenthal instead.

“She said, ‘Yeah, why not? That’s what you’re thinking about, so why don’t you just put it in there?’” Elderkin said. “I said, ‘Thank you. I needed permission.’ And that kinda got it over the top for me.”

Garges, who formerly played percussion for the Charlotte Philharmonic, called in members of the Charlotte Symphony to add strings to the song. Bumgardner refers to Garges’s contact list as “the amazing Chris Rolodex.” Several times during the project Garges recruited friends and colleagues to help out, including Lloyd and Billy Livsey, whose credits include the distinctive keyboard solo on Tina Turner’s 1984 hit, “What’s Love Got to Do With It.”

The core band for “Be Good to Yourself” contained several veterans of Winston-Salem’s Luxuriant Sedans, including Bumgardner, Slater and Gino “Woo Funk” Grandinetti, all of whom have deep roots in the Winston-Salem music scene.

“Gino Grandinetti is the glue behind these songs, and he and I go back more than 50 years,” Bumgardner said. “He taught me to play.”

They recorded most of the basic tracks at Old House Studio in Charlotte, Garges’s home base. The original plan called for a 10-song album, but the pandemic gave them plenty of time to expand the project — and introduced logistical problems when everything shut down. The musicians worked out arrangements at Bumgardner’s house in Winston-Salem, then traveled to Charlotte to record. Many of the singers and supplemental musicians added their parts remotely, with the final album containing parts recorded at 29 different studios, Slater said.

Doug Davis of the Vagabond Saints’ Society, Magnolia Green, and the Plaids sang lead on the title track. It’s a soulful ’70s song written by Andy Fraser of Free and recorded by Frankie Miller in 1977. Davis traveled to Charlotte multiple times to add keyboards to about one third of the album’s 23 songs.

“Chris Garges is a great guy to work with,” said Davis, who has his own studio in Winston-Salem. “It’s pretty rare for me to get to watch another producer do his thing. To me, the biggest challenge and the biggest reward of the producer-artist relationship is to gain trust and be able to develop a collaborative environment. They clearly had that going on.”

Winston-Salem singer-songwriter Jeffrey Dean Foster sang and played guitar on “Ruby Beach,” a song by Matt Faircloth of the Houston Bros., a Charlotte band. Foster cut his parts at his home studio with his daughter, Ava, who sang in school groups and founded the rock band Fortezza before leaving for college in California.

“She knocked it out literally in 10 minutes,” Foster said. “She’s so smart about harmonies, and really knows how to find all those harmonies from years of musical theater and then in a capella (groups).”

Faircloth sang lead on a different song, one of several examples of musical chairs on “Be Good to Yourself.” Holsapple sang a song by Chris Bell of Big Star. Uzzell sang a Holsapple song, and Don Dixon sang an Uzzell song.

Garges came up with the idea for one of the most outrageous moments on “Be Good to Yourself,” an over-the-top version of Edgar Winter’s “Frankenstein.”

“Rock albums don’t have instrumentals any more,” Garges told the other musicians. “We need to do an instrumental for this.” Their rendition includes a steel-pan solo by Tracy Thornton and a saxophone solo by Jay Reynolds, who played with Asleep at the Wheel.

“Be Good to Yourself” was officially released Nov. 8 and is available on CD and via digital download. Meg Griffin recently played six songs from the project on her SiriusXM radio show. Other versions of the project are in the pipeline beyond the double CD package. Coming soon on vinyl: a 10-song sampler and a four-song selection of bonus tracks called “Snacks, Vol. 1.”

The producers dedicated “Be Good to Yourself” to four fallen Triad musicians: Sam Moss, Ed Kinser, Faye Hunter and Fred Benton. Foster hopes the project will help prevent more suffering and death: “Maybe just calling attention to it will make some people think, ‘Oh, that is something that we should talk about.’”

Proceeds from “Be Good to Yourself” records and merchandise go to mental health and substance abuse treatment for uninsured North Carolina working musicians and others in the music business, such as truck drivers and roadies. The producers have partnered with two agencies providing services: Abundance NC (abundancenc.org) and SIMS Foundation (simsfoundation.org), an Austin-based nonprofit in the process of setting up operations in the Triangle.

“I hope people will understand that this is more than just a piece of music,” Bumgardner said. “I think anybody will find something on there that will make them smile.”

He and his fellow producers expressed considerable pride in the finished product.

“This little dream had become this thing that was way more powerful than we were hoping it would be,” Bumgardner said. “It was humbling. As Rob has said several times, ‘I can’t believe it’s us.’”

OG Spliff, the moniker of Winston-Salem musician Clifford Owens, enters 2023 with the kind of tailwind that he hopes will lead to more success…

Ozzy Osbourne cancels all shows, says his touring career is over

The heavy metal legend has suffered a series of health setbacks in recent years.

The most popular songs that never won a Grammy

These tracks may not have won any Grammys, but they were all wildly successful with listeners.

Grammys 2023: How to watch and who’s performing at the ceremony

Music’s biggest night returns to Los Angeles for the 65th Annual Grammy Awards on Sunday. Here's a look at how to watch, who's performing and more.

Beyoncé might break the all-time Grammy wins record this year

Beyoncé might break the all-time Grammy wins record this year

Chris Garges, Rob Slater and Ed Bumgardner played on and produced the album “Be Good to Yourself.”

The “Be Good to Yourself” cover art was designed by Woodie Long of Santa Rosa Beach, Fla.

Chris Garges played drums and other instruments on the “Be Good to Yourself” album.

Ed Bumgardner works in the studio.