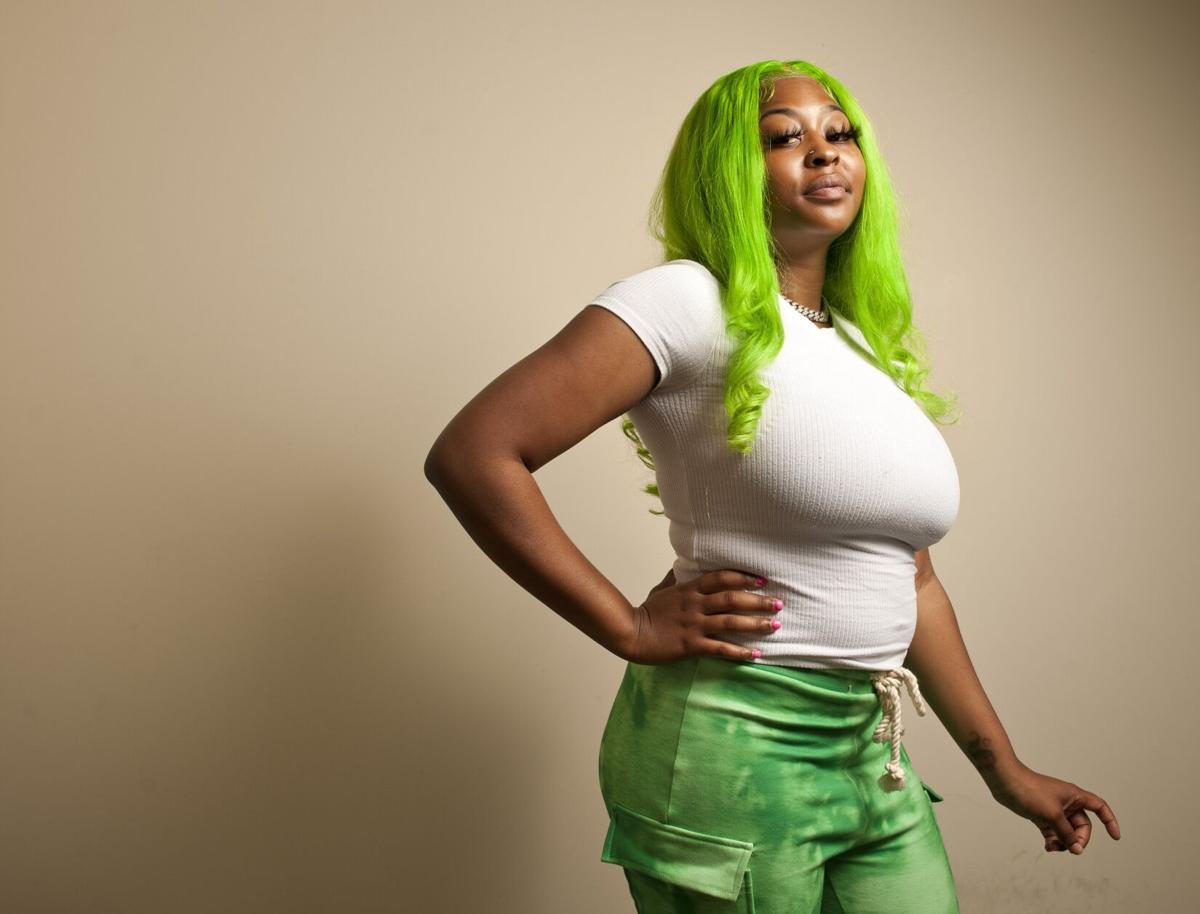 Winston-Salem rapper Shinesha Smith performs as $hyfromdatre. One of her songs has over 6 million views, and another has been viewed more than a million times. 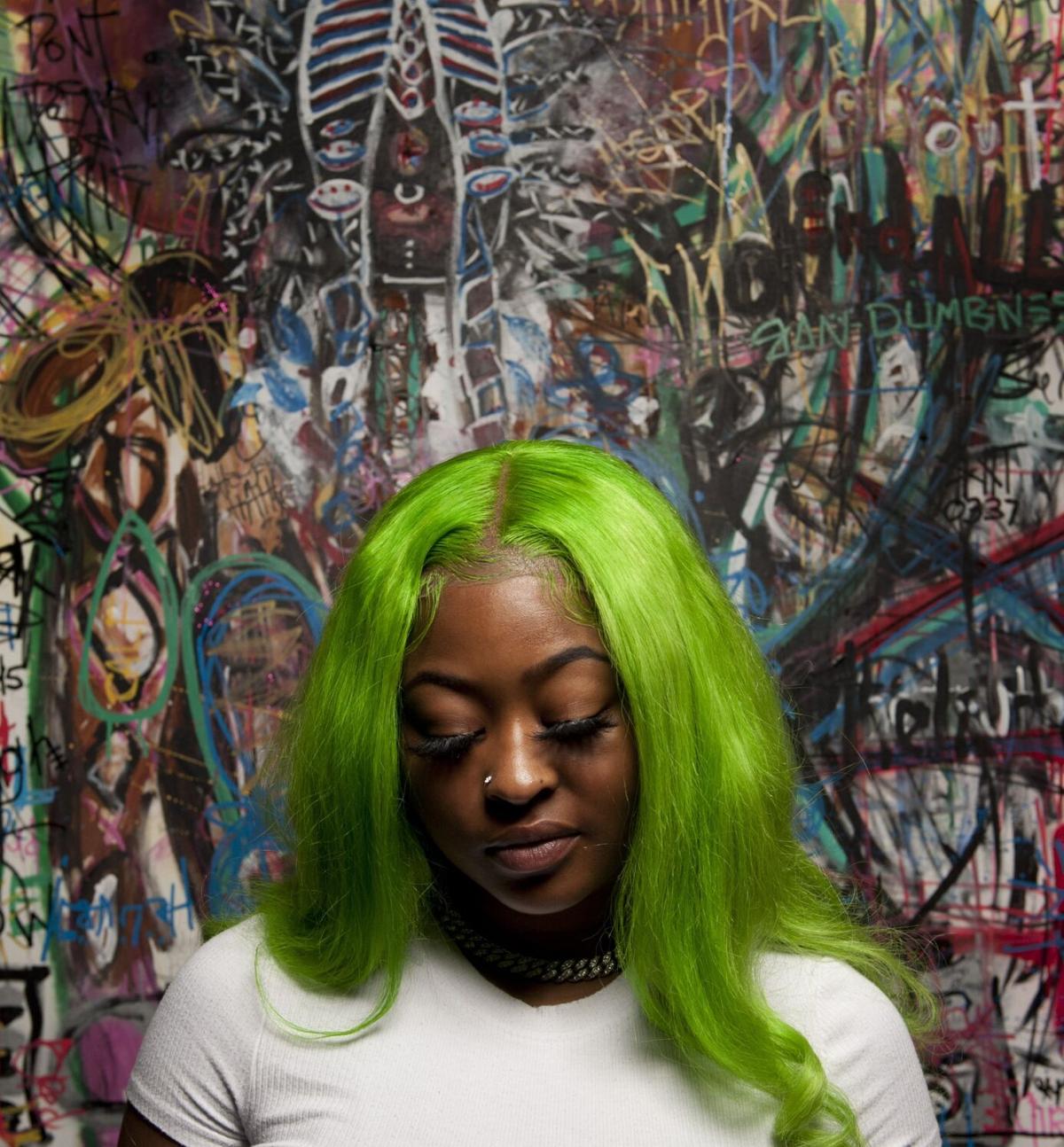 Winston-Salem native $hyfromdatre said she never set out to be a rapper, but two of her rap songs now have more than 8 million views combined on social media.

In April, she collaborated with famous rapper Asian Doll aka Asian Da Brat on the song “Life of a Hitta,” which has already had more than 101,000 views on YouTube.

On TikTok, “Go Bestfriend” and “Ms. Hardbody” have gone viral.

Terrance Evans, her manager and the owner of Big Body Talent Management in Raleigh, said a lot of $hyfromdatre’s popularity has grown through word-of-mouth praise of her music.

“I think she is a once-in-a-generation talent,” Evans said. “A lot of things are happening for her organically.”

He was a fan of her music before becoming her manager.

“She checked off all the boxes — the look, the style, the lyrics, the confidence,” said Evans, who also grew up in Winston-Salem.

$hyfromdatre’s real name is Shinesha Smith. She was born and raised in Winston-Salem and still lives here.

As a child, she would rap, sing and dance and enjoyed sports and watching anything on TV with music scenes, including “School Gyrls” on Nickelodeon.

“If they were acting and dancing and singing, I was just into stuff like that,” she said.

“I didn’t have a dream of being a rapper,” she said. “It was just one of the things I wanted to do.”

Watching children her age perform on Jermaine Dupri’s TV show “The Rap Game” inspired her to do more rapping.

She graduated from Parkland Magnet High School in 2018 then attended Forsyth Technical Community College for about a year before deciding to concentrate on her music.

“It wasn’t something I wanted to do right away,” she said of going to college just out of high school.

But she still desires to return to college one day for a degree.

“You never know how life will turn out,” she said. “I want to go to school. I don’t want to leave myself hanging like that. I always want to have a backup plan.”

“When I dropped my first song, people were, like, shocked,” $hyfromdatre said.

While in high school, unless people were family members or close friends of hers, they didn’t know she rapped.

“I was just regular,” she said with a laugh. “I did not express myself at school.”

“I got a lot of love on that, and I was not expecting it,” $hyfromdatre said. “It was overwhelming.”

To date, she has released 10 songs including five songs from Her EP “No Shy Sh!t Allowed,” which came out in March 2020. One of her recent songs is “Clout Chaser.”

$hyfromdatre said she is happy and excited about how well “Go Bestfriend” and “1730 G” have done since their release dates.

“But it’s like, ‘Now, I just have to know how to play my cards right about it. Am I going to keep hitting numbers like this?’” she said.

A lot of her songs are based off her emotions.

“It can be how I’m feeling or a situation that has happened,” she said.

For example, her song “Go Bestfriend” in which she disses her former best friend came about after that person dissed her, she said.

Locally, $hyfromdatre has performed at the Silo Nightclub in Greensboro and Mango’s Nightclub in Raleigh. She is scheduled to perform at the reopening of Platinum Nightlife in Winston-Salem in early June.

Rapping is still just one of the things $hyfromdatre wants to do in life. Her dreams are to expand into other music genres and get into acting.

Over the next six months to a year, she wants to make more content, especially outside the world of rap.

“I want to get into YouTube more and bring my fans closer into my life, to show them more of me,” she said.

She said she has also had conversations with other famous artists to do more collaborations and plans to start selling her own merchandise such as T-shirts, hoodies and sweat suits.

Evans said a lot of major record labels are taking notice and want to sign $hyfromdatre.

But because success as a rapper is coming her way so fast, $hyfromdatre said she wants to take her time before signing to a label.

“I just want to be independent and make decisions by myself before I make the decision to be under somebody else,” she said.

Aaron Hunter, an artist and repertoire person, known as a talent scout, for the music distribution company UnitedMasters based in New York, was recently in Winston-Salem to meet with Evans and $hyfromdatre in hopes of signing her.

“I came across her music via TikTok,” Hunter said. “I think that’s how a lot of people did. I wasn’t obsessed with the song. I was obsessed with her. I can see the vision.”

“Right now, it’s just the budding scene of Winston-Salem,” Hunter said. “I feel like she’s going to spearhead that and then break everywhere. It’s just a matter of time.”

He said he can see her branching out in other areas of the entertainment industry.

Music by $hyfromdatre is available on all streaming platforms.

This free performance is part of the Summer Parks Concert Series presented by Forsyth County government and the Arts Council of Winston-Salem and Forsyth County.

Mark Chesnutt performance at the Winston-Salem Fairgrounds rescheduled for 2022

Vocalist Jason McKinney and conductor William Henry Curry will be featured at noon July 22 as part of a series of free online conversations in Winston-Salem Symphony's MusicConnects program.

Eric Clapton said he won't perform at venues requiring COVID-19 vaccines after a UK announcement that vaccine passports will be mandatory at crowded venues.

Fans of concerts, festivals and other live events appear to be making up for lost time as event, arts and entertainment venues seek COVID-19 recovery.

In a July 21 concert at the Eastern Music Festival, not only will percussionists make music with drums, but with a xylophone, marimbas, vibraphone, tambourines, flower pots, brake drum, even their hands on a table.

Legendary R&B group Boyz II Men will perform Sept. 18 with the Greensboro Symphony Orchestra at the Steven Tanger Center for the Performing Arts.

Local singer-songwriter typically does 240-300 events a year and writes songs for other people. He has been a full-time musician since 2013.

Black church music has been around for centuries, but gospel only became codified as a genre about a century ago, as this jubilant film reveals. There’s plenty of archival footage that traces the history of the form through the lens of “father of gospel music” Thomas Dorsey, who wrote “Take My Hand, Precious Lord,” the Martin Luther King Jr. favorite that figures prominently in “Summer of Soul.”

Winston-Salem rapper Shinesha Smith performs as $hyfromdatre. One of her songs has over 6 million views, and another has been viewed more than a million times.