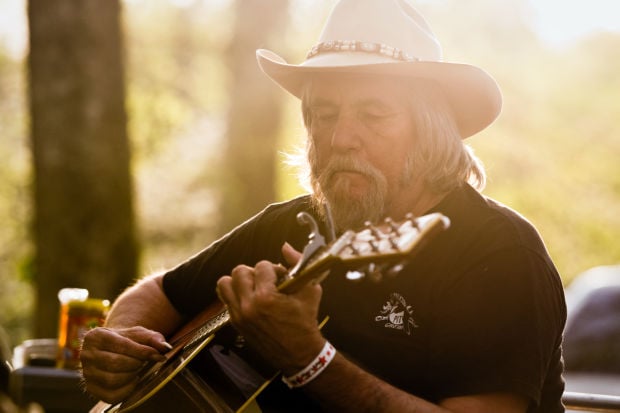 Musician Tuck "Coyote" Carson strums the guitar with friends on Thursday, April 24, 2014 at the Rivers Edge Campground in Wilkesboro, N.C. 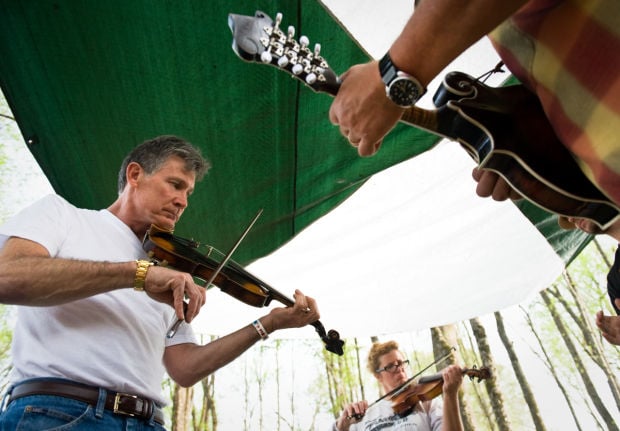 Dave Paolucci, a musician from Maryland, plays with Sherri and Mark Criminger on Thursday, April 24, 2014 at the Rivers Edge Campground in Wilkesboro, N.C.

WILKESBORO — There isn’t much that goes on at the River’s Edge Campground during MerleFest that Suzanne Hamby doesn’t know about.

Hamby, Wilkes County’s emergency management director, has her command post set up just across the way from the bluegrass festival’s grounds. She and her team are ready to act at a moment’s notice. Hamby also is in charge of the campground that serves as a five-day home for some of the event’s most dedicated followers — most of whom she knows by name.

Is there someone you’d like to see perform at MerleFest?

Hamby has been running the River’s Edge — site of 600 camping spaces — since MerleFest began in 1988. She’s known by the many repeat campers for running a tight ship and making sure that everyone has what they need for a great festival. Naturally, it’s endeared her to many.

Over the 20 years that David Versch has been coming to MerleFest, he and his wife, Lynn — who has been to 15 MerleFests — have come to consider Hamby as family. They catch up on the way in, before setting up their own campsite and checking in on the sites Dancin’ Dave has set up for other festival-goers.

Years ago, driving out of his fourth MerleFest, Dave Versch had the idea to start a business renting out camping gear. Dancin’ Dave’s Festival Camping has been going strong ever since.

He sets up as many as 20 tents each year for fans who don’t have the gear, wherewithal or desire to do it themselves, charging up to $320 for the most deluxe setups.

The Versches take their time on the 20-hour drive from northern Wisconsin, stopping to see friends and family along the way. The next festival and the next dance floor is never far, though.

“I can dance pretty good,” he said, to explain the nickname. “I love dancing the waltz with my girl.”

River’s Edge is a favorite for all kinds of folks. There are the Dancin’ Daves of the festival, who are all about the music. Then there are devotees for whom the festival has become more about their MerleFest family than the music. For them, the weekend is one big reunion.

“We’re all family,” said Blythe Samuels, a high school teacher from Cumberland, Va. “We all look out for each other.”

Samuels is at her 17th MerleFest. She’s attended through rain and shine, while pregnant, breastfeeding and with a broken ankle. It’s her one vacation without her family each year, and nothing gets in the way.

“There’s nothing like MerleFest,” Samuels said. “It’s a magical place.”

She comes with a group of friends each year, but there are always people waiting for her, too — the festival friends she sees once a year. Samuels met Gary Hamilton – down from Roanoke, Va., for his 16th festival — at River’s Edge years ago. Hamilton said he’ll probably go into the festival for one of the four days this year, but the music is just something extra. The camaraderie and the atmosphere is what keeps him coming back.

Friendships form fast at River’s Edge — staying up all night drinking and playing music in the woods will do that for you.

That was the scene Wednesday night. Campers who had arrived the day before the festival officially started didn’t wait for the gates to open to get the bluegrass going. Standing barefoot on a green and white patterned rug, tossed onto ground — still crunchy with fallen leaves — behind their 1965 Shasta camper, Sherri and Mark Criminger collected old friends and new with an instrument and an ear for improvisation.

Switching between her upright bass and fiddle, the rotating crew spent Thursday afternoon pickin’ and playin’ in the wooded lot at the back of River’s Edge. Sherri said she and Mark have been talking about coming to MerleFest for years. For their 10th anniversary, they finally made it.

“It’s been on the list,” Mark said, stepping away from his mandolin.

They packed up instruments, friends and their “road manager” — Pumpkin, a fluffy, 18-year-old orange tabby who is more interested in sleeping than swinging — into the trailer they call home at music festivals throughout their offseason. Starting next month, the Crimingers will be back to work on the Outer Banks, where they live and play regular gigs during the tourist season with their band “Jug Tucker.”

By then, the festival grounds will be reclaimed by the college campus that it calls home. Hamby will pack up her mobile command center. Dancin’ Dave will be on to the next festival. The MerleFest faithful like Samuels will pack up and head home — until next year.

“When we’re driving away,” Samuels said, “that’s when we’ll start talking about next year.”

Highlight's from Friday's action at MerleFest.

Today Della Mae will take the stage twice at MerleFest, but the Grammy-nominated quintet isn’t new to the scene.

MerleFest 2014 runs from Thursday to Sunday on the campus of Wilkes County Community College in Wilkesboro.

MerleFest 2014 runs through Sunday on the campus of Wilkes County Community College in Wilkesboro.

Musician Tuck "Coyote" Carson strums the guitar with friends on Thursday, April 24, 2014 at the Rivers Edge Campground in Wilkesboro, N.C.

Dave Paolucci, a musician from Maryland, plays with Sherri and Mark Criminger on Thursday, April 24, 2014 at the Rivers Edge Campground in Wilkesboro, N.C.