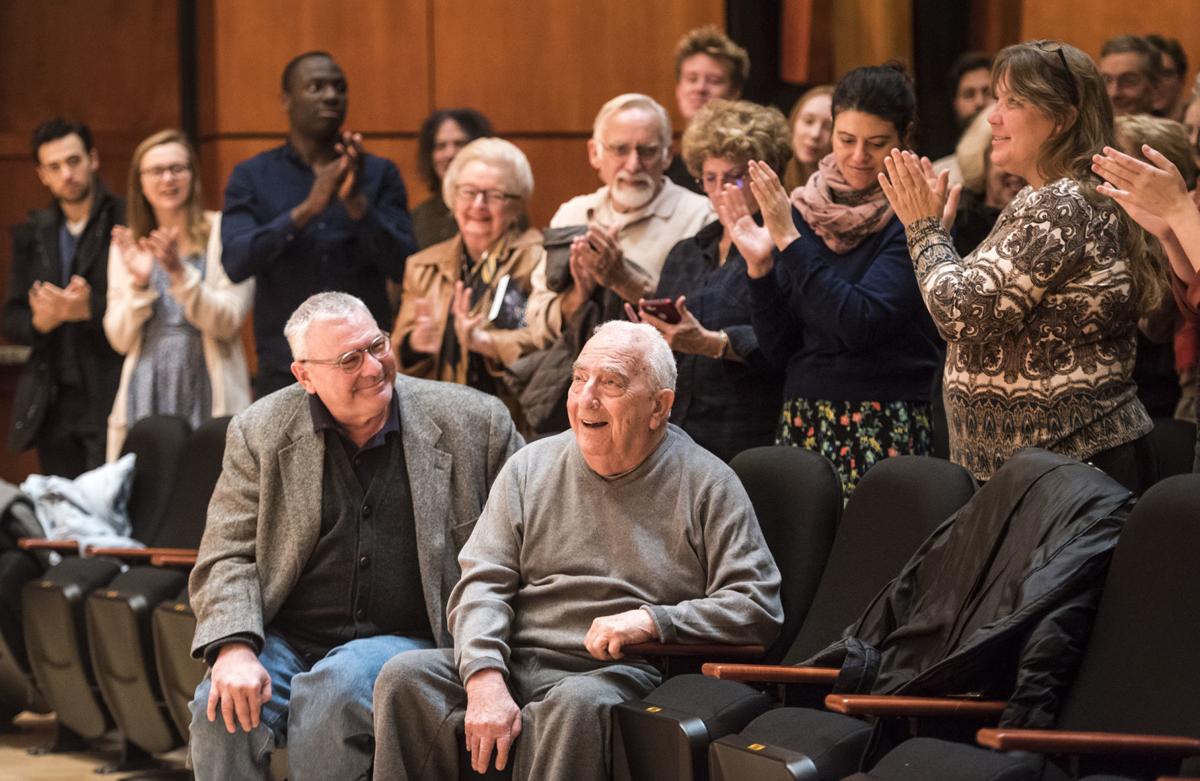 Robert Beseda, seated left, and Gerald Freedman (center), Dean Emeritus of the School of Drama at , UNCSA, are seen at a panel discussion of Freedman’s legacy. He died March 17, 2020. 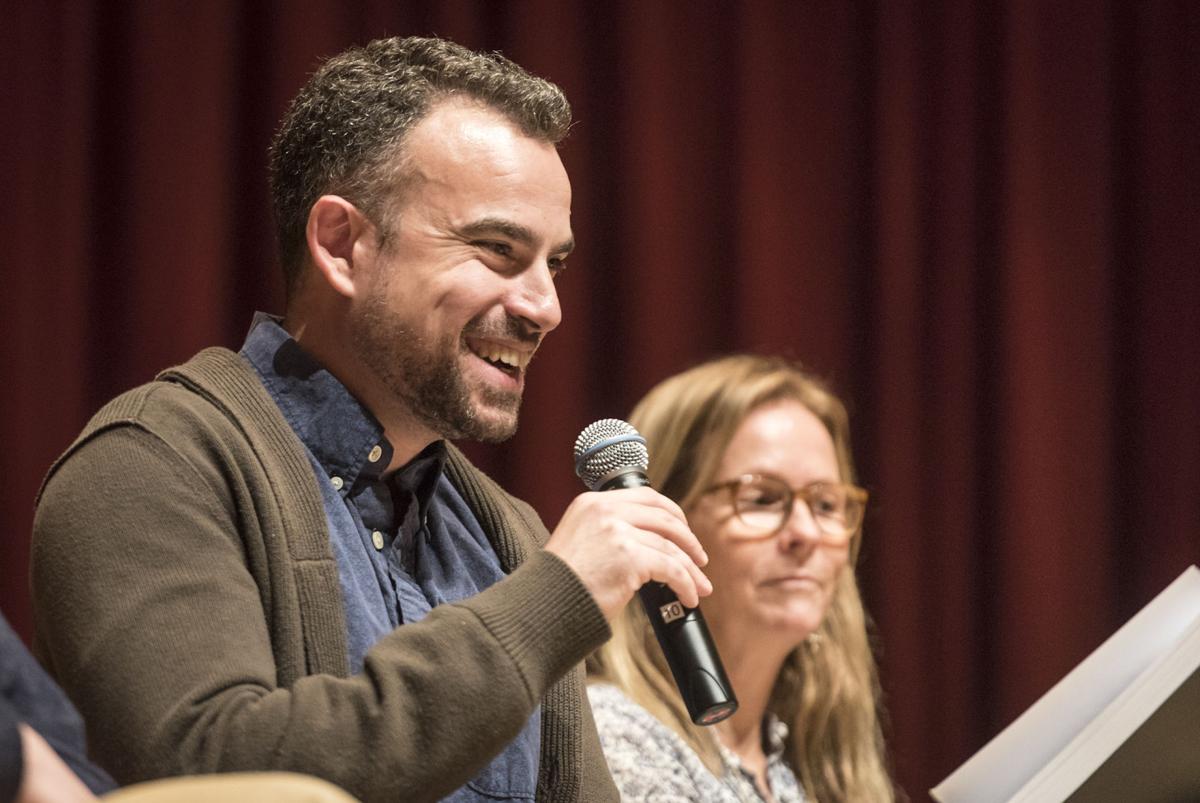 Isaac Klein, author and UNCSA alumnus, speaks during a discussion of his book, “The School of Doing,” and the legacy of Gerald Freedman. At right is Ashley Gates Jansen, a panelist and guest artist at the school. 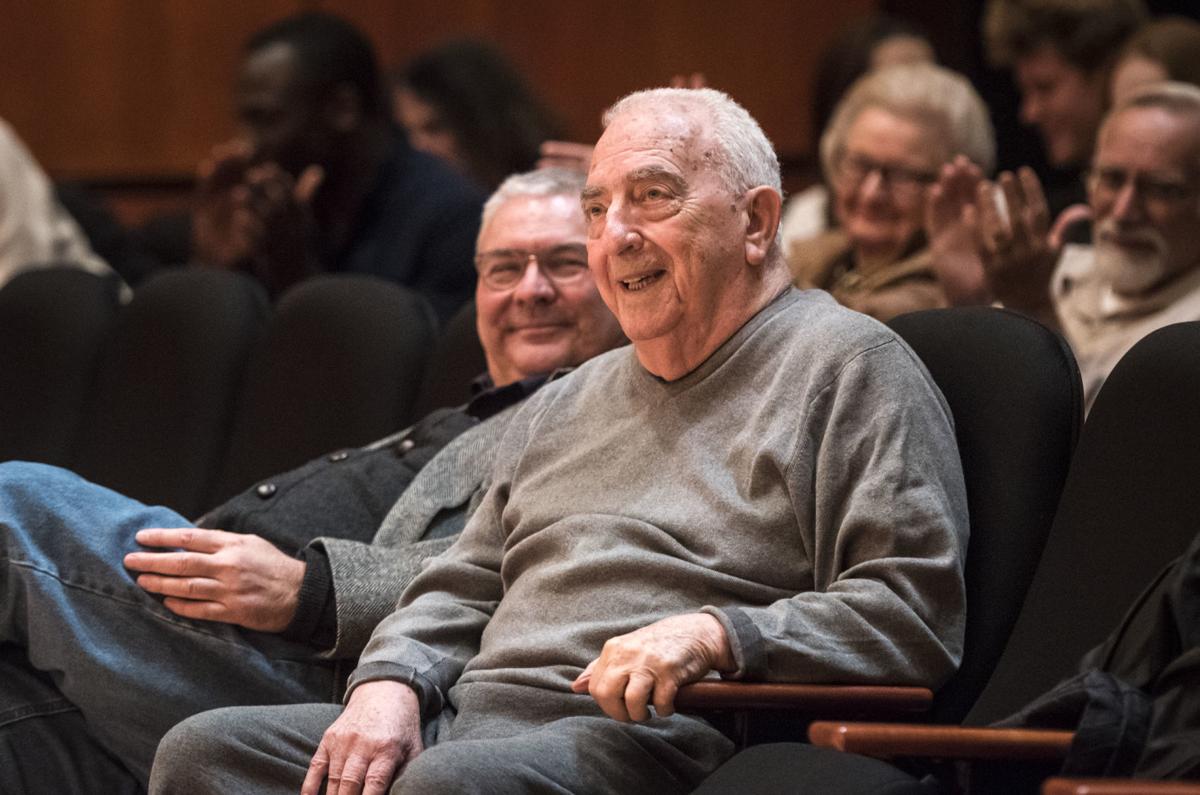 Gerald Freedman, UNCSA emeritus dean of the School of Drama, died on March 17, 2020. 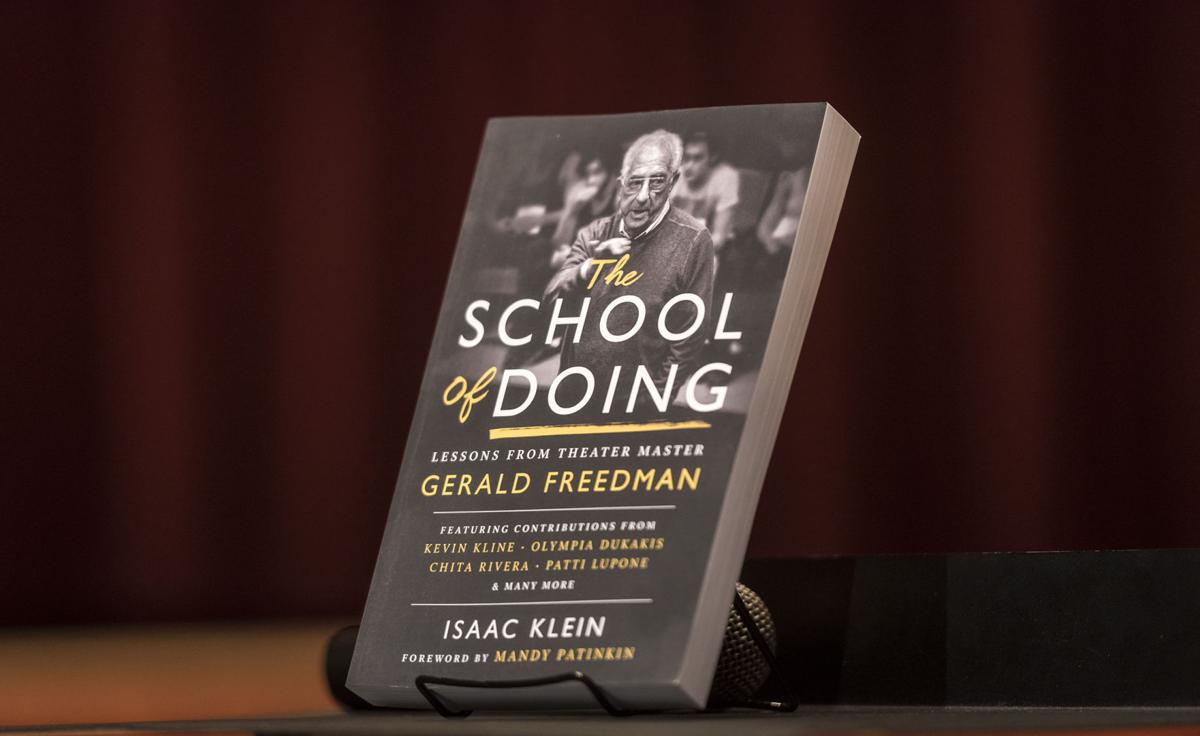 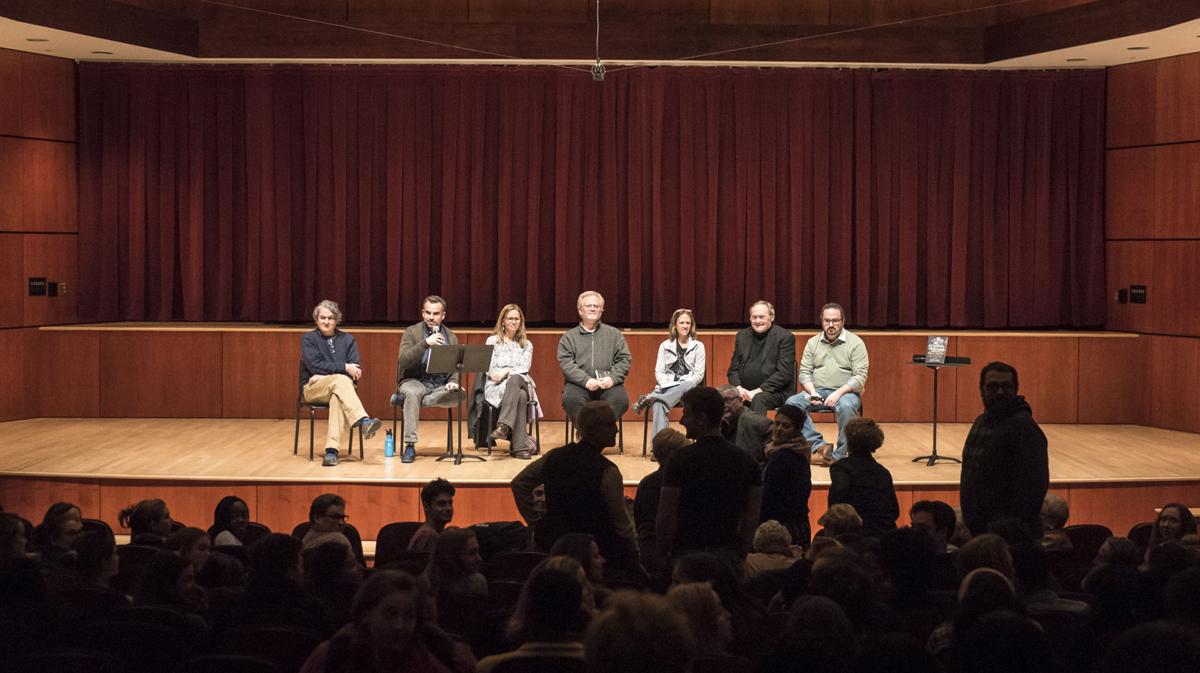 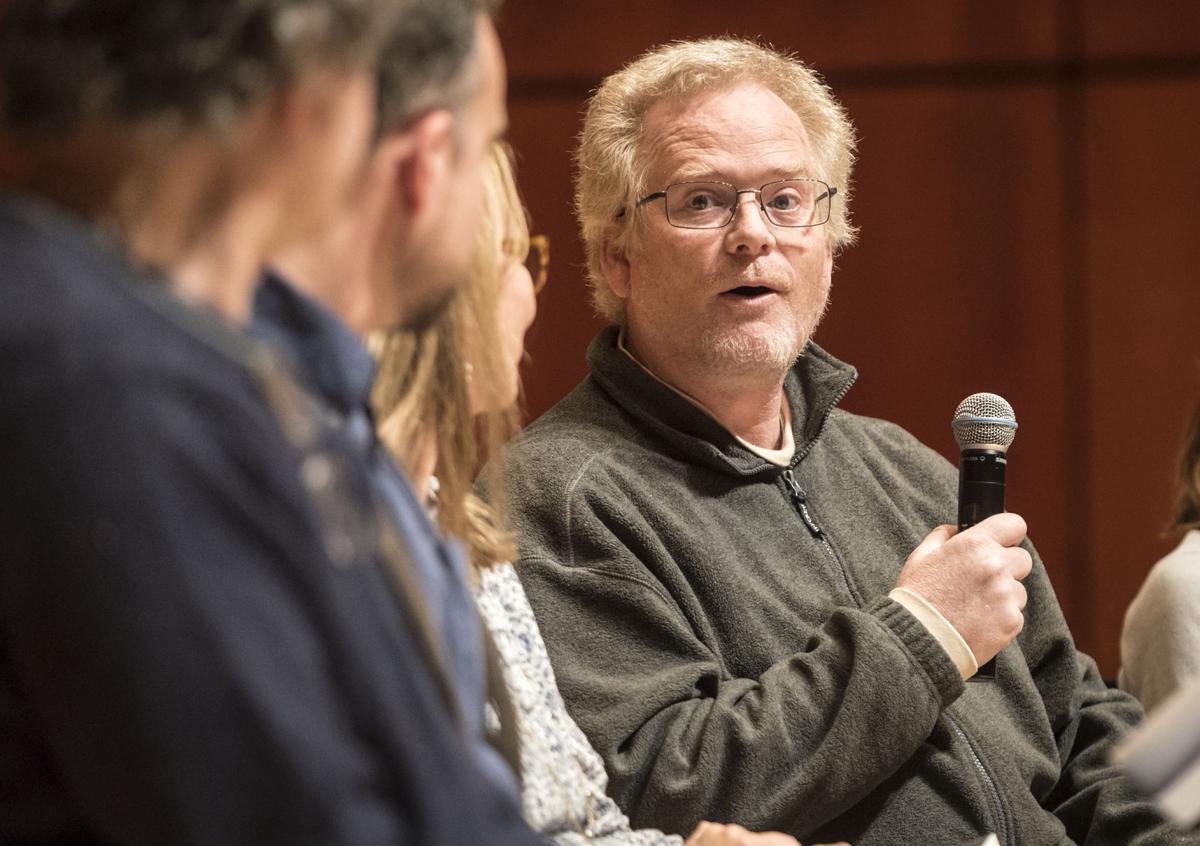 Kelly Maxner, UNCSA alumni and faculty, speaks during a discussion of the legacy of Gerald Freedman, UNCSA emeritus dean of the School of Drama 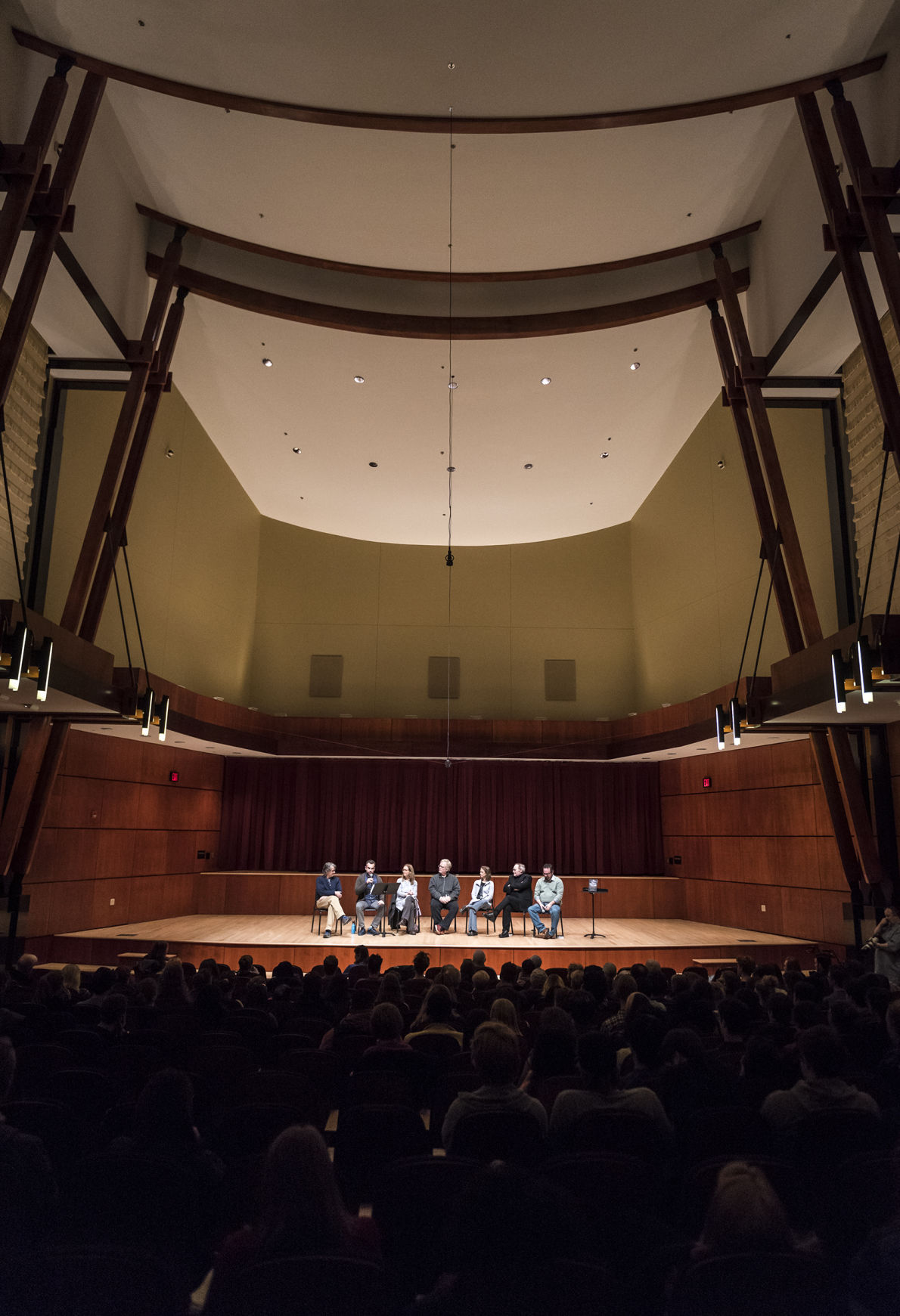 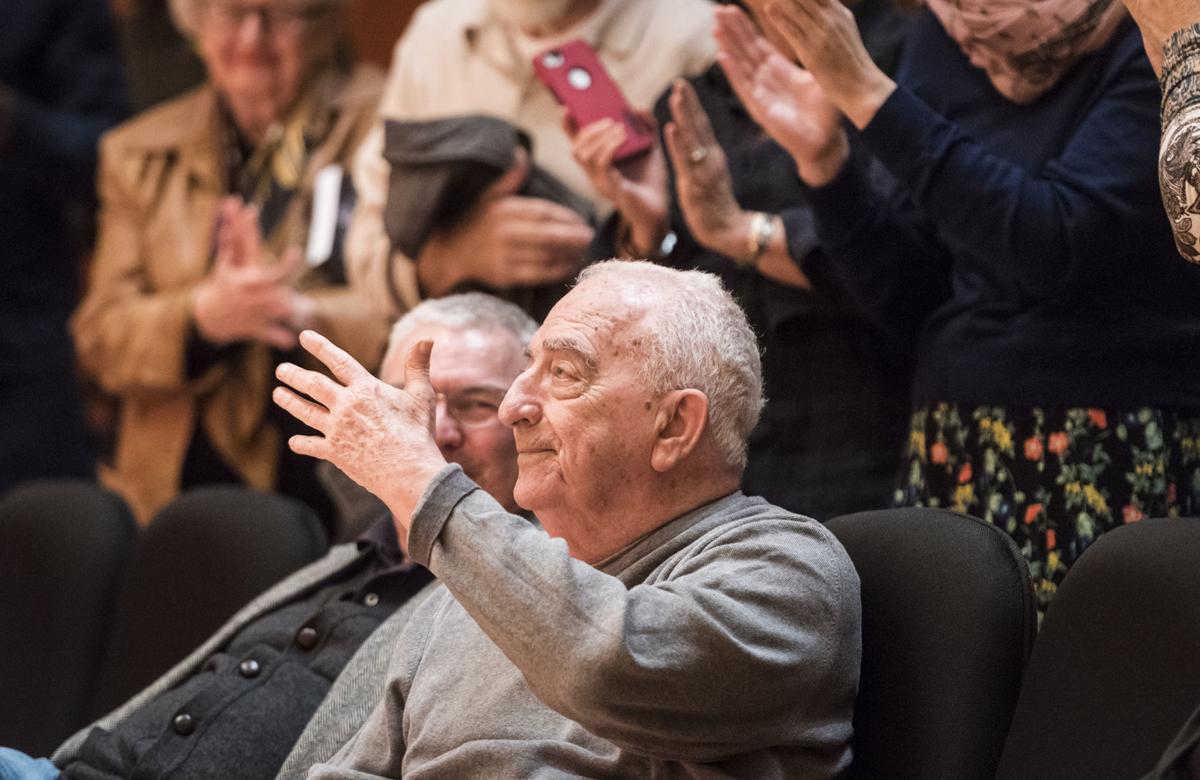 Gerald Freedman, dean emeritus of UNC School of the Arts’ School of Drama, died Tuesday. He headed the drama school for 21 years.

By the time Gerald Freedman directed the premiere of “Hair” off-Broadway, he already had plenty of theater experience, so he knew how to handle undisciplined writers.

James Rado and Gerome Ragni wrote the lyrics and book, but their music was a mess, Freedman said. When they brought in music by composer Galt MacDermot, Freedman agreed to direct. Several of the songs became Top 10 hits, including “Aquarius” and “Let the Sunshine In.”

“I forbade them (Rado and Ragni) smoking pot at rehearsal,” Freedman said. “I sent them home night after night.”

“Hair” was the first play presented by the Public Theater in New York when it opened in 1967.

“It was supposed to run for six weeks,” Freedman said. Instead, the play moved to the Cheetah nightclub, where buzz about it continued to grow. (Pun intended.)

“Hair: The American Tribal Love-Rock Musical” opened on Broadway in 1968 and ran for more than 1,750 performances, followed by an equally successful run in London, revivals and countless regional performances in the U.S.

Freedman, the director who birthed it, retired from the UNC School of the Arts in 2012, where he had been Dean of the School of Drama since 1991.

A stroke in 2011 made it impossible for him to continue in that role, but he stays in touch with friends and former students and communicates clearly with a little help from Robert Beseda. Beseda was Freedman’s assistant dean while he was at the school; the two remain fast friends and colleagues.

About 4½ years ago, Isaac Klein, one of the thousands of students and theater professionals whom Freedman has taught and directed, began work on a book about Freedman’s teaching and directing methodology. Klein graduated from UNCSA with a degree in directing in 2006.

“The School of Doing: Lessons From Theater Master Gerald Freedman” was published in November, funded by a Kickstarter campaign, which exceeded its goal.

Klein was in Winston-Salem last week for panel discussions and booksignings at the school and at Bright Leaf Books.

“Gerald was the greatest teacher I’ve ever had,” Klein said. “But he is more than my teacher. ... Gerald is the person whose wisdom I hear most often in my head, and hold most closely in my heart.

“Gerald has singular, powerful insights, unavailable in any other theater text. ... Many of his lessons are invaluable not only for the performing arts, but for life itself.”

Another panelist, Jeremy Skidmore, a UNCSA alumnus and adjunct faculty, said, “Good teaching is a container for experience. Gerald was my crucible for theater and for life.”

Before coming to UNCSA, Freedman taught at Yale and The Juilliard School. He served on the Kennedy Center New Play Committee and is a member of the College of Fellows of the American Theatre.

In 1982, he participated in a six-week summer program in the Oomoto Institute, Kameoka, Japan, which shifted his approach to directing. The four principals of Oomoto philosophy are purity, optimism, progressivism and unification.

It influenced him to be less concerned about controlling the outcome of his actors’ work, and more interested in “allowing” them to find their own way.

Freedman encourages actors to constantly question their characters and their motivations. “Stop trying to be right. Stop being right and be aware.

“There is no answer. Write that big on the wall. The questions are the catalyst. The answer is the goal, but the search for the answers is the pay-off.

“If you have to force an outcome, then there’s something wrong with the work and with your thinking.

“It ought to take you a lifetime to find the truth of yourself. Start now.”

“An actor is always doing,” Freedman said. “You have to be your inner self, not just your show-biz self.

“Patti LuPone and Kevin Kline are perfect examples of that. They act from their craft. They don’t depend on their personalities.”

Ashley Gates Jansen, a local director and guest artist at UNCSA, was in the first acting class that Freedman taught there. “First, there were three, then there were two directing students,” she said, laughing.

Matthew Bullock, a retired UNCSA drama professor, met Freedman in 1972 when Bullock was a student.

Other participants on the panel were Scott Ziglar, the current Dean of Drama; Kelly Maxner, alumnus, director of the high school drama program; and Mollye Maxner, alumna and adjunct faculty.

“The School of Doing” is a guide to Freedman’s craft and teachings, including lessons on acting, directing, text analysis, comedy technique, camera technique, Shakespeare, musical theater, design, pedagogy and the industry.

The book also includes comments from UNCSA alumni including Anna Camp (BFA 2004, films including the “Pitch Perfect” franchise and “The Help”), Dane DeHaan (BFA 2008, “Valerian and the City of a Thousand Planets,” “Life,” “The Amazing Spider-Man 2”) and Billy Magnussen (2007, films including “Bridge of Spies” and “Into the Woods” and Broadway’s “Vanya and Sonia and Masha and Spike”).

“As a young man, Gerald went back and forth between directing stars such as Jack Lemmon, Joan Crawford and Humphrey Bogart for the screen in Hollywood, and working onstage in New York with Jerome Robbins, for whom he assistant directed the original ‘West Side Story,’” Klein said.

In addition to being a newly minted author, Klein is a director and writer of plays and musicals. His work has been seen at the PIT, the O’Neill, the Flea, the York, the Lark, the Box, BAM, Fresh Ground Pepper, Loft227, Crashbox, Pipeline, FringeNYC, LPAC, Abrons Arts Center, Theater Row, Judson Church, Guild Hall, Capital Fringe, Woolly Mammoth, Barn Arts Collective, and the Museum of Natural History, among others.

Based on his experience and what he learned from Freedman, Klein explained the commonalities and differences in directing and teaching.

“There is a lot of overlap. They have a lot in common,” Klein said. “To teach or direct something successfully, you are in a position where you want to help an artist find the truth in the the work.

“It’s different if you have a paying audience. To get a conclusion quickly, I might say to a professional: Emphasize this word. I might say to a student: Figure out what you want to emphasize.”

In an academic situation, everyone in a production will be studying the same method. In a professional production, all of the actors may be coming from different schools of thought.

“If they are all using different vocabulary and different techniques,” Klein said, “the director needs to get all these people together in a way that allows the audience to more fully receive the work. In that case, you need to not teach craft so much as to get the result to the audience.”

What: "The School of Doing: Lessons from Theater Master Gerald Freedman," by Isaac Klein

Cost: $25; half of the profits will go to the Gerald Freedman Excellence Endowed Fund at UNCSA.

Isaac Klein was inspired to write "The School of Doing" after reviewing class notes that included quotes from Freedman.

Here are some of what Klein calls "Geraldisms."

Robert Beseda, seated left, and Gerald Freedman (center), Dean Emeritus of the School of Drama at , UNCSA, are seen at a panel discussion of Freedman’s legacy. He died March 17, 2020.

Isaac Klein, author and UNCSA alumnus, speaks during a discussion of his book, “The School of Doing,” and the legacy of Gerald Freedman. At right is Ashley Gates Jansen, a panelist and guest artist at the school.

Gerald Freedman, UNCSA emeritus dean of the School of Drama, died on March 17, 2020.

Kelly Maxner, UNCSA alumni and faculty, speaks during a discussion of the legacy of Gerald Freedman, UNCSA emeritus dean of the School of Drama

Gerald Freedman, dean emeritus of UNC School of the Arts’ School of Drama, died Tuesday. He headed the drama school for 21 years.