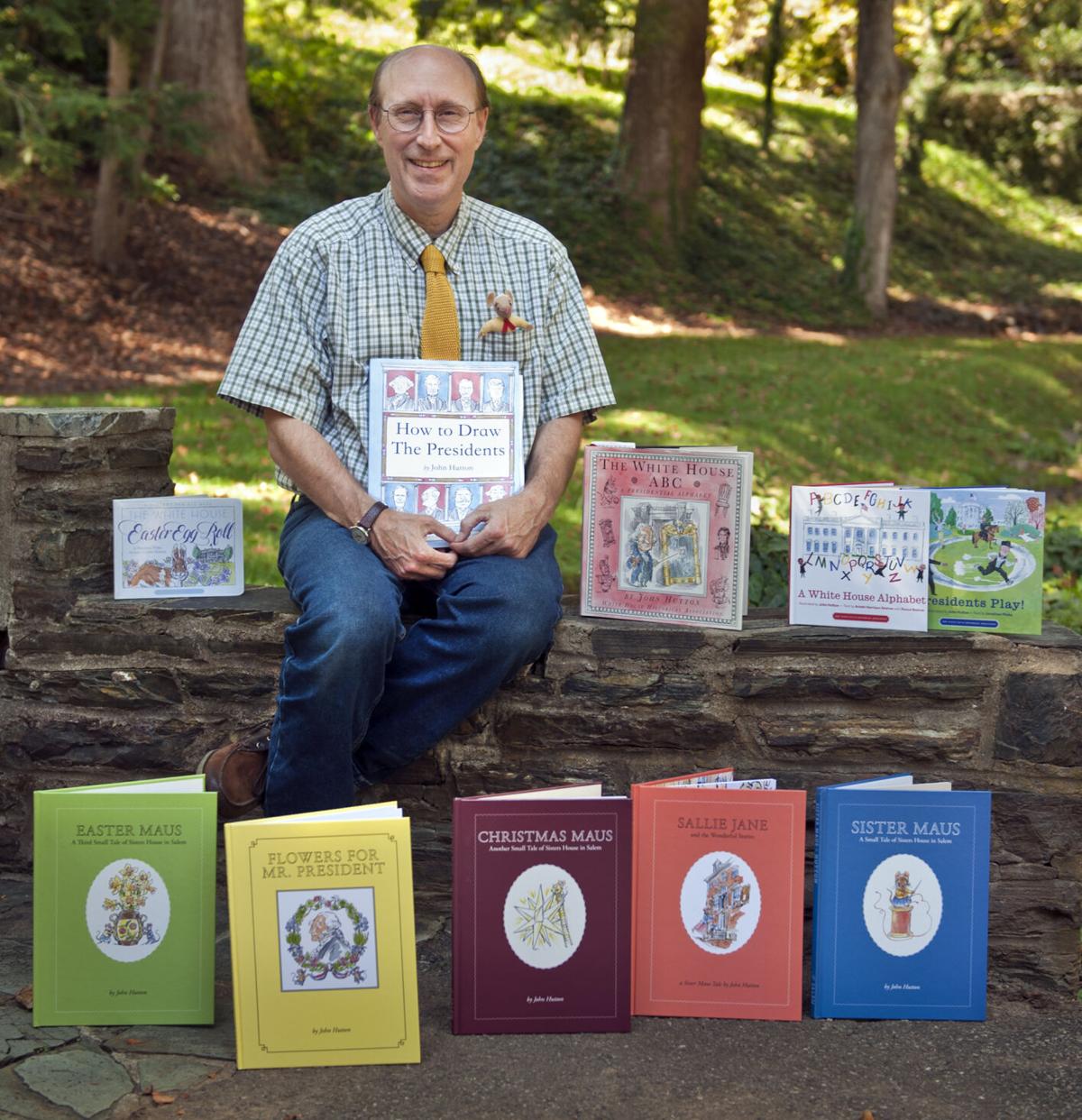 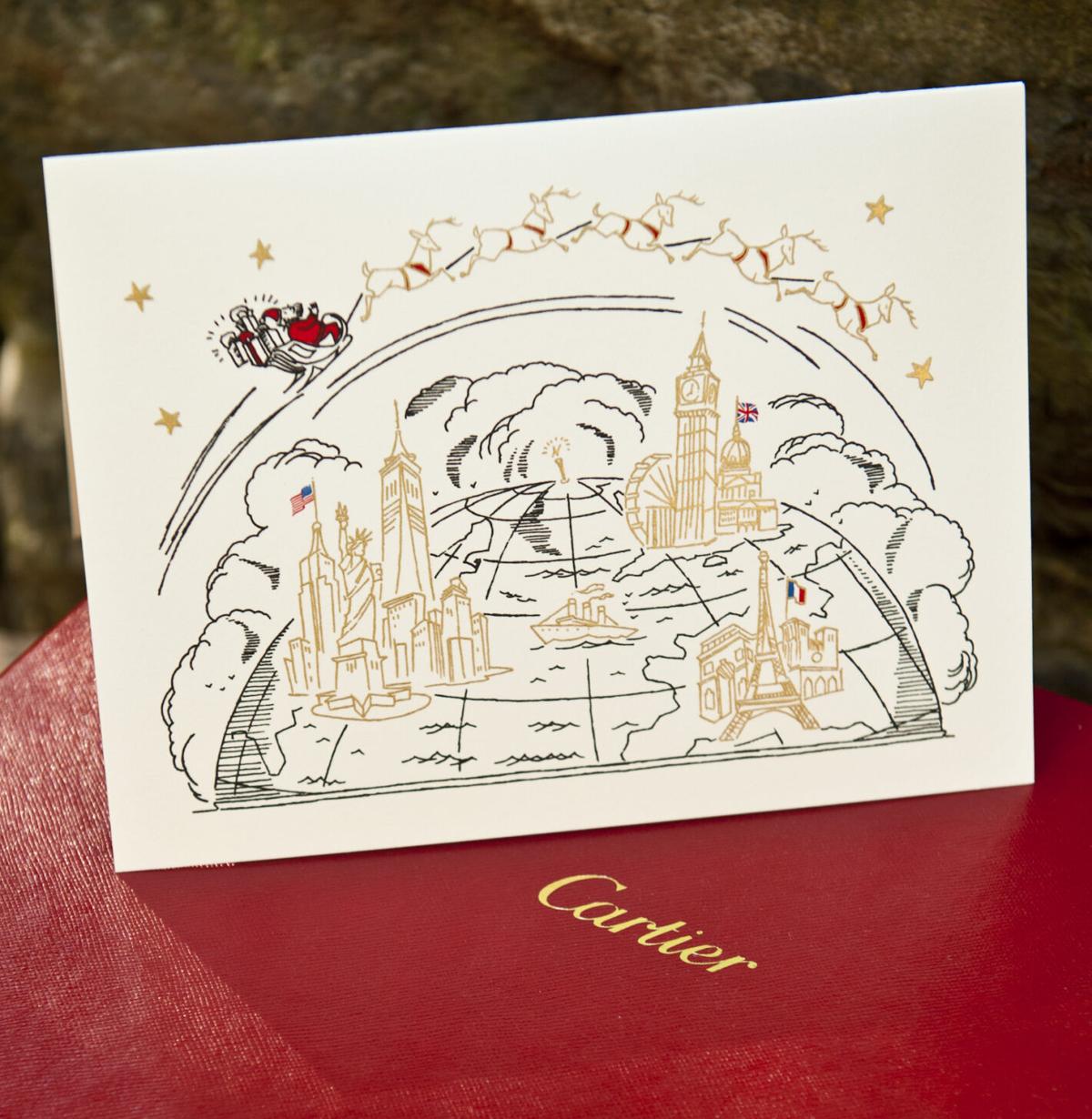 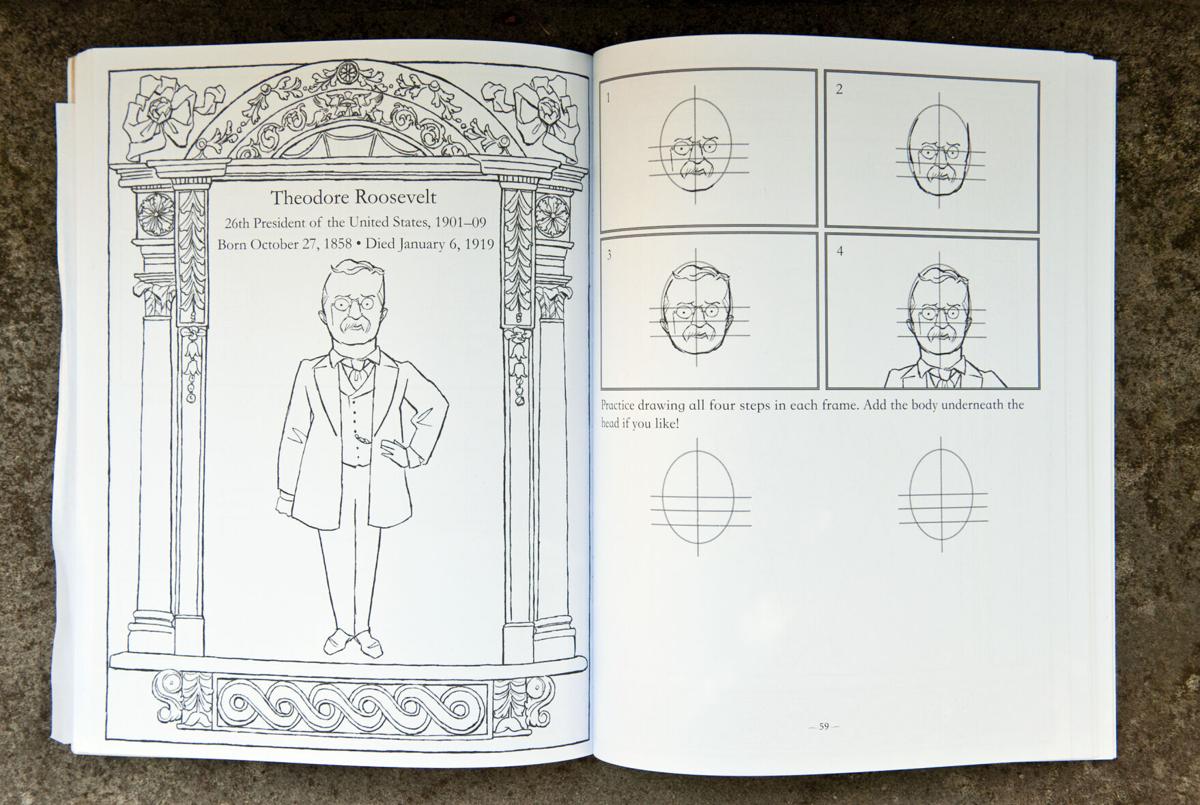 An excerpt from John Hutton's book, "How to Draw the Presidents". 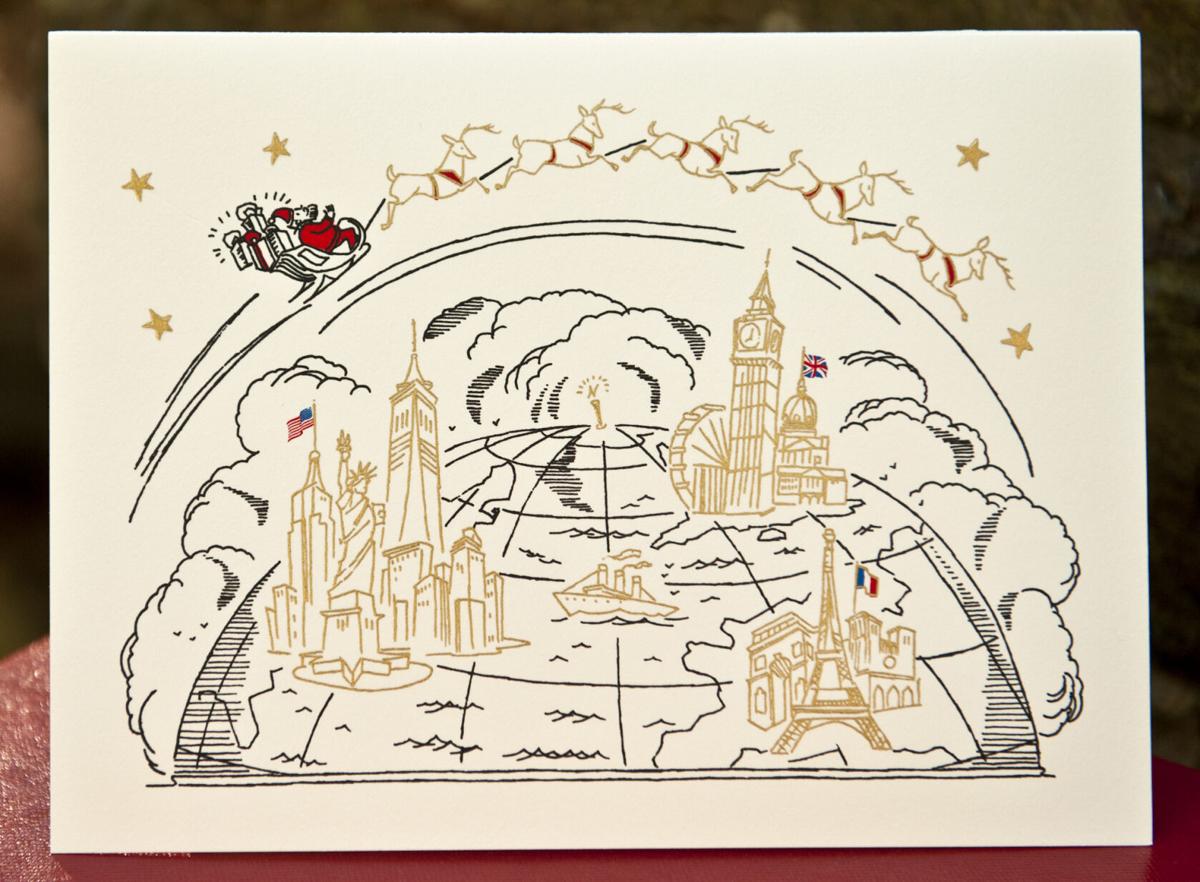 John Hutton has written and illustrated a number of books on presidents and the White House. 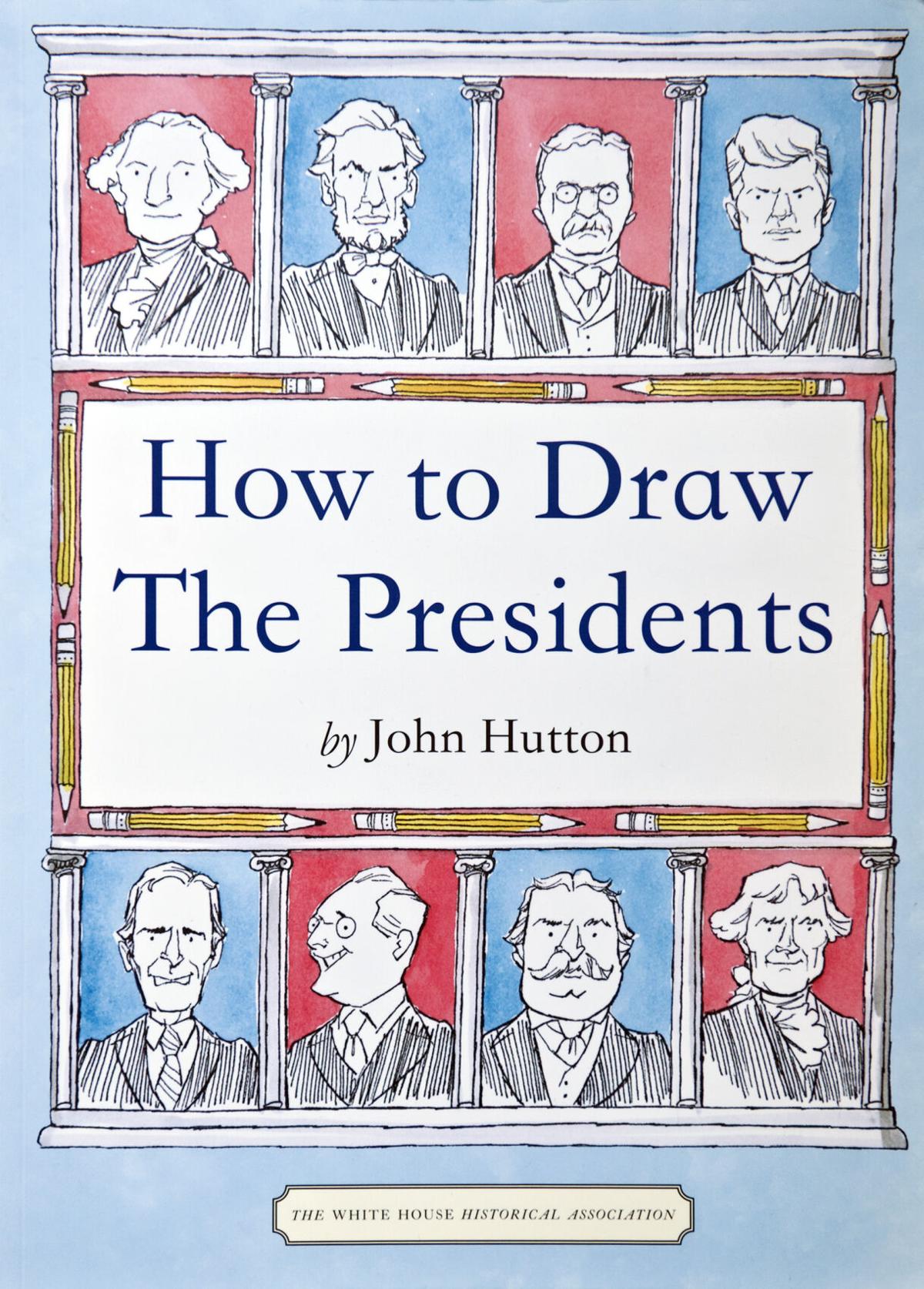 John Hutton has written and illustrated "How to Draw the Presidents".

John Hutton has written and illustrated five books in the Sister Maus series which is based on a mouse living in Salem's Sisters House.

Just in time for the festive season, artist John Hutton has designed a holiday card that will be available from Cartier.

“This year’s design is Santa Claus flying over the world,” Hutton said.

In addition, the White House Historical Association has released two books illustrated by Hutton, who lives in Winston-Salem. The books are “A White House Alphabet” (authors Rocco and Arioth Smirne) aimed at helping children learn their ABCs, and “Presidents Play!” (author Jonathan Pliska) that covers sports that presidents have enjoyed in the White House.

Hutton is a professor of art history at Salem College, where he has taught for 30 years. At home when he’s not grading papers, he said he takes out his sketch book and works on drawings.

“I’m usually pretty quick so I can get the work done for whoever wants it fairly rapidly,” Hutton said.

Over the years, he has done several cards for Cartier and books for the White House Historical Association, including a book he wrote and illustrated titled “How to Draw the Presidents” (2019).

Answer: I think of myself as a painter, mostly, but (I) also do book illustrations for a number of small companies and organizations. I’ve illustrated more than 20 small projects for Thornwillow Press in Newburgh, N.Y., mostly line drawings for limited edition, hand-bound books. I wrote and illustrated a five-book series for Salem College, where I teach art, about a small mouse named Sister Maus, who lives in Sisters House, the oldest building (1785) on Salem’s campus.

For the past 19 years, I’ve done many illustration projects, including five books, for the White House Historical Association in Washington, D.C., a nonpartisan organization that promotes knowledge of the White House as a historic building and the lives of the presidents and their families there. I especially enjoy the challenge of doing historically-based stories and illustrations, of making history come alive for children and anyone else who likes illustrated books!

Answer: I’ve always loved to draw, ever since I was 3 years old. I was an art and art history major in college, then in graduate school began to get interested in book illustration as well. A friend there had founded his own small press to create handmade books — Thornwillow Press mentioned above — and he encouraged me to do some illustrations for one of his books not long after I finished my Ph.D. So I’ve been doing book illustrations ever since. I think the most wonderful part of book illustration is how the pictures don’t just follow the story, but help to create it, add to it, to tell to a certain extent a second parallel story to go with the words.

Answer: I’ve always been interested in old art. When I was a boy, I lived across the street from our local library, and I was fascinated by the big "art books" they had on a set of shelves towards the back of the non-fiction section. I was always taking them home and learned to draw first by copying the pictures I loved in those books.

So weirdly enough, Rembrandt was the first artist to teach me how to draw storytelling pictures — I loved his Bible illustrations — and Albrecht Durer taught me how to draw portraits ...

For my book illustrations, I love to look at British and American illustrators from the 1800s and early 1900s for ideas. John Tenniel, who illustrated Alice in Wonderland, is a favorite. Walter Crane, Randolph Caldecott, Richard Doyle, Beatrix Potter, Rockwell Kent and Eric Gill are others. When I have a new project, I always ask myself, who has done something like that before — and I go find out, see what they did, learn from it and recombine and adapt their ideas in my own way. There are so very many great artists out there to learn from.

Answer: One big challenge is simply finding the time to work. I’m a full-time professor in the Art Department at Salem College, and classes take nearly all of my time during the school year. So I do most of my own art work at night, on weekends and during the summer. I love teaching students about them about art history and also helping them with their art when I can do a studio course now and then. It’s a trade-off, but a very rewarding one ... For my own work, the biggest challenge is always to create the most compelling storytelling art I can possibly make.

Answer: Art is who I am and what I do. I have to draw every day or I’m just not happy. There’s a kind of magic in picture making, so much so that time seems to stand still when you’re working. Working well, anyway!

Answer: When I’m working with my students, I always say, don’t give up! Set a problem for yourself and don’t stop until you get there and do it as well as you possibly can. Art is hard work, and it takes time to do something well. Look very carefully at the world around you, it’s full of beauty and ideas, things that you can love and share with other people through your art.

For more about artist John Hutton's books and illustrations, go to huttonillustrator.com or tinyurl.com/yyr66f7a.

Television Q&A: What French song is used in a recent Allstate ad?

Going inside the North Carolina Zoo with National Geographic

The North Carolina Zoo in Asheboro is considered to be the largest natural habitat zoo in the world. It has 2,600 acres with more than 1,800 a…

Oscar-winning actor Jeff Bridges says he is being treated for lymphoma. Bridges' Hollywood career stretches over six decades and has starred in over 70 films including "True Grit" and "The Big Lebowski."

AMC Theaters is losing money. Part of their solution to that problem is to rent out its theaters, including AMC Hanes 12 at 1501 Hanes Mall Bl…

For Jerry Lee Lewis' 85th birthday, he's planned an all-star virtual party. "Whole Lotta Celebratin' Goin' On: 85 Years of the Killer" will be…

An excerpt from John Hutton's book, "How to Draw the Presidents".

John Hutton has written and illustrated a number of books on presidents and the White House.

John Hutton has written and illustrated "How to Draw the Presidents".

John Hutton has written and illustrated five books in the Sister Maus series which is based on a mouse living in Salem's Sisters House. 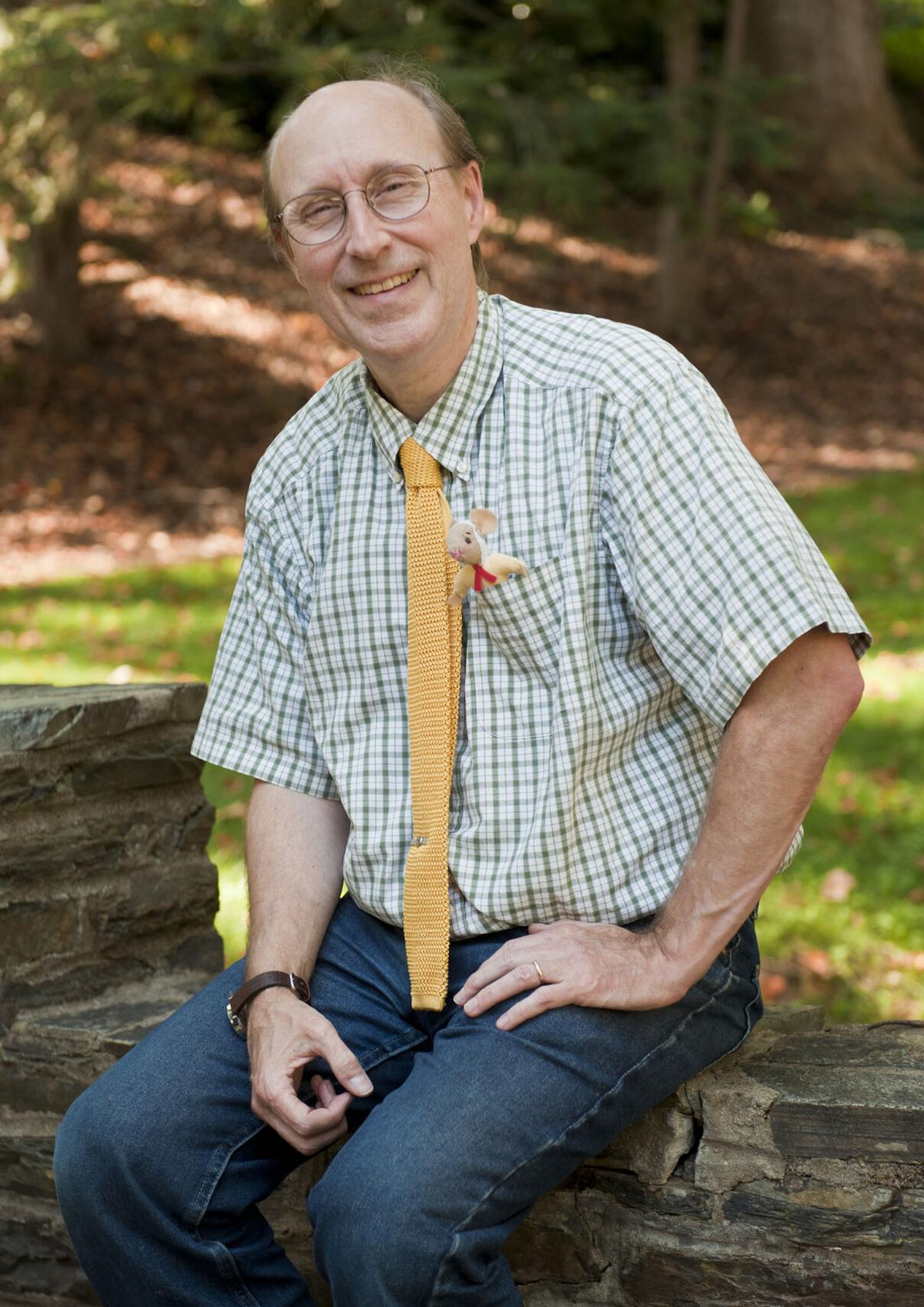