Jessica Singerman completed a mural on the Long Branch Trail. The Innovation Quarter commissioned her to paint a 50-foot long mural as an uplifting and encouraging message for everyone in Winston-Salem. 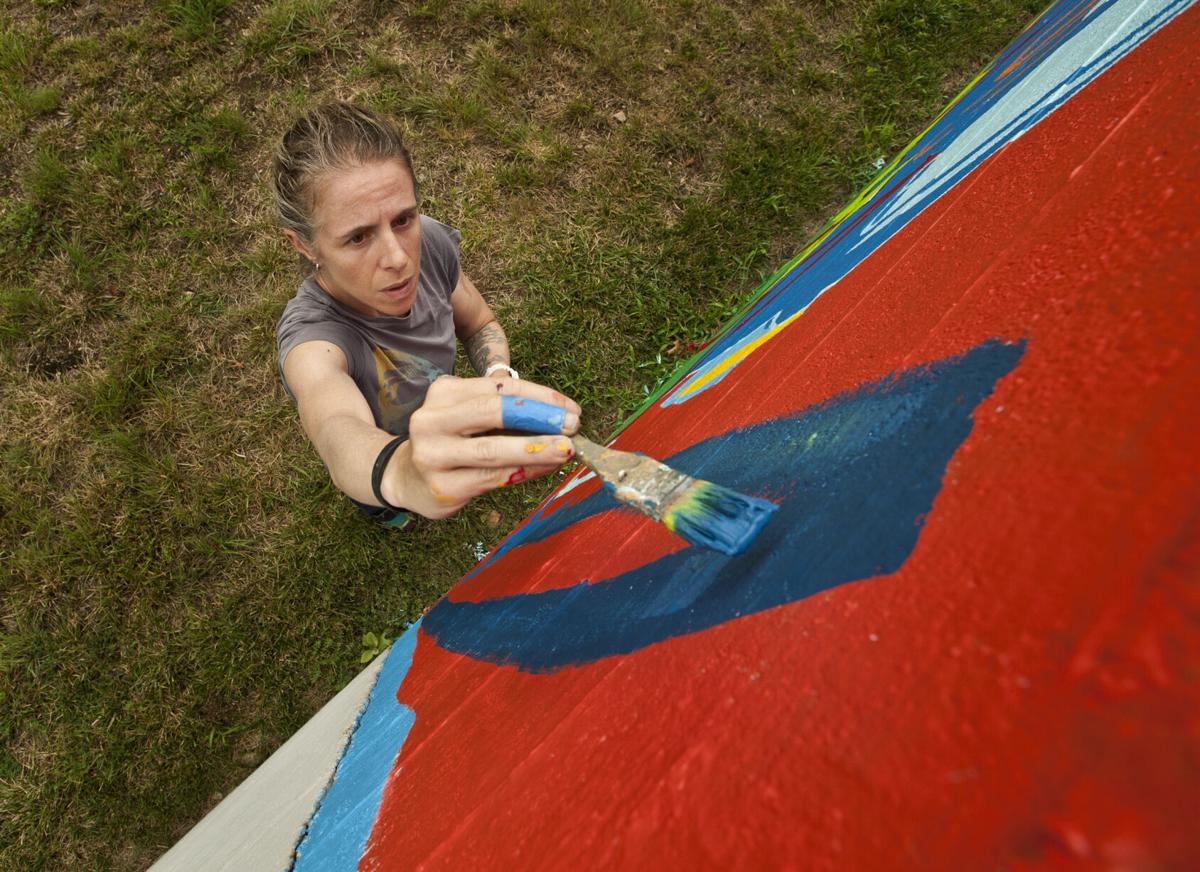 Jessica Singerman refines a mural she is painting on the Long Branch Trail. The Innovation Quarter commissioned her to paint a 50-foot long mural as an uplifting and encouraging message for everyone in Winston-Salem. 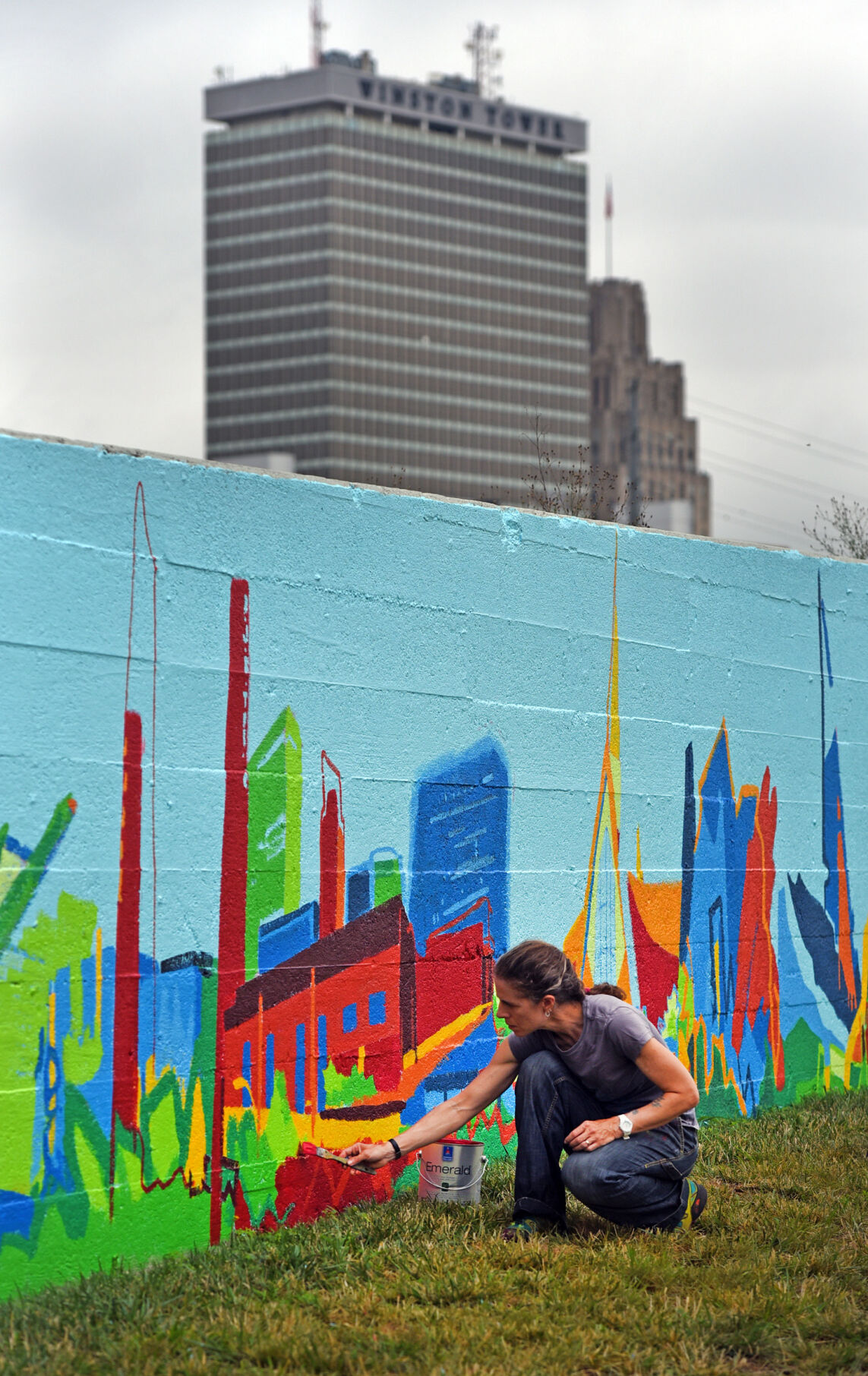 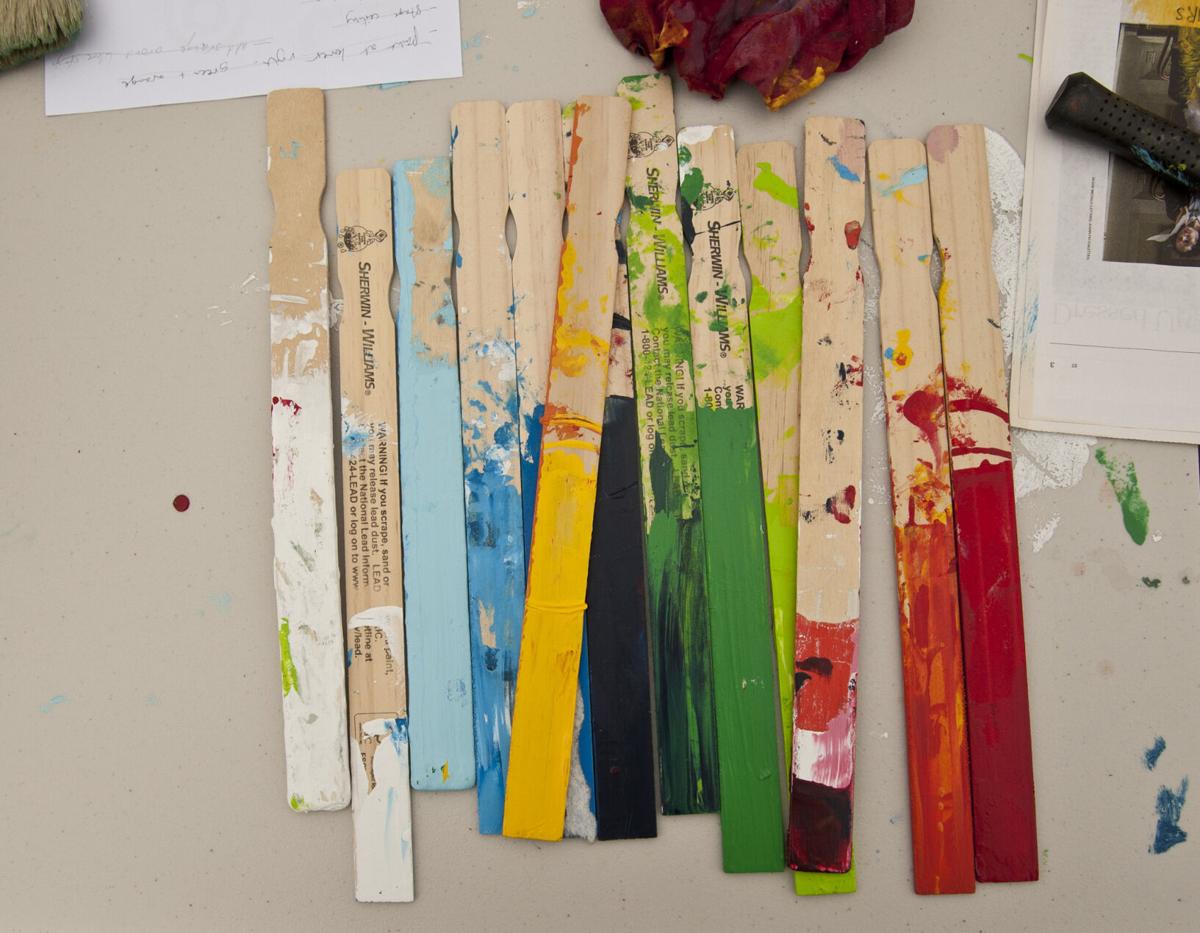 A series of paint stirring sticks is laid out on Jessica Singerman's work table as she paints a mural on the Long Branch Trail. 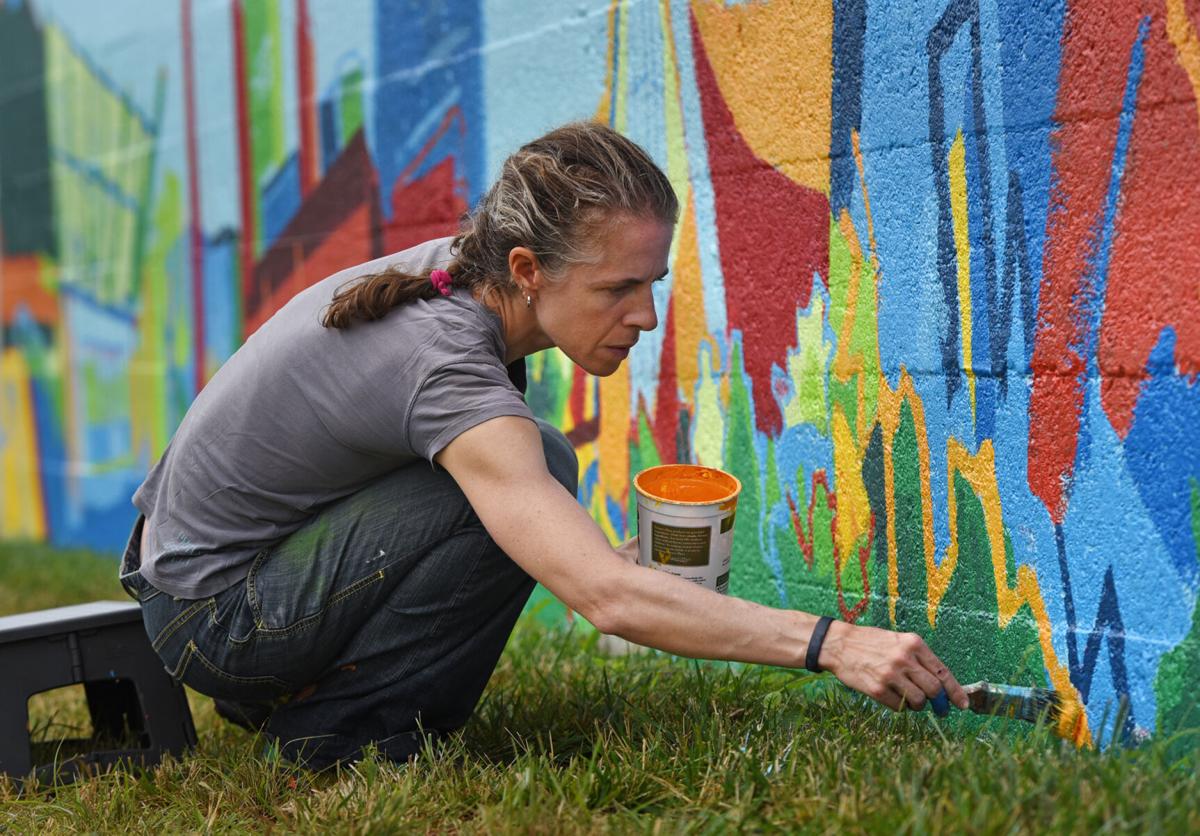 On a bright August day with a blue sky and puffy clouds overhead, Jessica Singerman was working close to the ground, lettering her signature onto the lower right-hand corner of a large, outdoor painting - the traditional spot for artists to sign their work.

"Winston Strong" by Jessica Singerman is on the Long Branch Trail near Business 40 in the Innovation Quarter, Winston-Salem.

Singerman, an avid painter and nature lover, was putting the finishing touches on a 50-foot long mural on a retaining wall that borders the Long Branch Trail. The trail, which was opened in 2018, runs from Martin Luther King Jr. Drive, through the Innovation Quarter and under Business 40 to Salem Creek Greenway.

Making a painting on a biking-hiking-walking path let her combine several of her passions.

"For me, the project was 100% aligned with what I believe in and love," Singerman said. "Making the painting along the path felt perfect to me, because people who bike and run and walk can enjoy it. It really felt aligned with the things I care about.

"Going into the outdoors has always been like coming home to me. I moved around a lot as a kid, and I often felt like an outsider. Now being outside — or looking at photos of the outside — serves as fodder for my work and feeds my work as an artist."

Singerman's mother is French, and her father was a French professor at Davidson College, so she grew up going back and forth between the two countries. She variously lived in Montpelier, Tours in the Loire Valley, and in suburbs of Paris.

"My father taught French, French culture and French cinema," Singerman said. "The faculty at Davidson would take turns directing the Junior Year Abroad program. My husband and I speak French at home, so our son is able to have a relationship with my mother's side of the family who still live in France."

She and husband, Tim Bowman, who works in the School of Filmmaking at UNC School of the Arts, have a son, 7. Her interest in cycling and art developed simultaneously. She's also a runner, took ballet, was a modern dancer and a yoga teacher.

"I rode to get around as a kid in Davidson," Singerman said. "And I got more into it in graduate school — road biking, racing, cycle cross. I started running as a kid."

She has had many peak biking experiences, starting with touring France for the first time in 2003: "(It was) the hottest summer on record. Then I worked for Trek Travel for a while. I guided trips for them all over the world and managed different destinations."

Singerman is president of the Piedmont Flyers, a local bicycling club, but they are inactive now because of the novel coronavirus pandemic.

"As a kid, I was always drawing," Singerman said, but a life-drawing class when she was 15 at Musée des Beaux-Arts de Tours made her begin to take her art more seriously.

Singeman received her Masters of Fine Arts in 2004 from the University of Delaware. Her watercolors are the subject of a book published in 2017, "Little Watercolor Squares," and her award-winning paintings and drawings are exhibited and collected internationally.

After graduate school, she said she struggled to find her footing as an artist. She taught for a while. In Australia for her husband's work, she kept her art supplies in a cardboard box and would unpack it and work a little every day.

Back in the states in 2013, she and Bowman moved into a home with a garage that was at her disposal. She began a steady practice of working daily and has been at it ever since.

"Having my son was big turning point," she said. "I had an about-face and realized that if I didn't do my work every day, I would lose myself in motherhood, so having a baby at 32 re-focused me."

Singerman works in oil, acrylic, watercolor, drawing media, mixed media and video. "For me, it's about the idea, and if it makes sense to use other media, that's what I'll do."

She also coaches other artists.

"I feel strongly about my work, and coaching is a way to give back," she said. "Many of us are having to juggle life and an art form, and I like being able to show that it's possible — keeping up your creative practice, whether it's carving out time for it or dedicating your day. ... It's difficult but possible."

Lindsey Schwab, director of community relations for the Innovation Quarter, was part of a committee that selected Singerman to create the mural.

"Jessica was chosen because her pieces are fueled by nature and are landscape-driven, and we were really interested in applying that to an urban greenway," Schwab said. "The impetus to start this project was a desire to create a piece of art on the Long Branch Trail that people could enjoy during this time of COVID-19.

"More and more people are enjoying the outdoors during the pandemic."

Schwab said that the name of the piece is "Winston Strong."

"The Long Branch Trail is such a resource for our community," she said. "And Jessica's mural is an example of the connectivity that the trail brings to the community.

"I love that it incorporates all the different elements that you can see from the trail — Pilot Mountain, the Innovation Quarter, and the United Metropolitan Baptist Church."

Lisa and Bernard Faulk, out walking for exercise on the trail, were happy to see the mural, and were excited that their church was included.

"I like the range of images. The colors are calming. It's a great location. As I climb that hill, it will probably be motivating," Lisa Faulk said, laughing. "We walk Winston-Salem, here some days, some days at Reynolda and at Meadowlark."

Singerman said that she is pleased to have done a project that contains both representational work and abstraction and combines her twin passions for art and the outdoors.

"It feels good to make something that can be seen by everyone," she said. "Art is for everybody."

Gwyneth Paltrow cut back on alcohol after battling Covid-19

Finnigan’s Wake, a mainstay bar and restaurant downtown for 15 years, has announced it will close permanently on Oct. 30.

Two Tarheels have opened up a bar in Winston-Salem with a New Orleans theme.

Tomatoes are a go-to ingredient for me for quick weeknight sauces.

Showmars to open off Stratford in former Tijuana Flats location

Winston-Salem is set to get its first Showmars restaurant.

Jessica Singerman completed a mural on the Long Branch Trail. The Innovation Quarter commissioned her to paint a 50-foot long mural as an uplifting and encouraging message for everyone in Winston-Salem.

Jessica Singerman refines a mural she is painting on the Long Branch Trail. The Innovation Quarter commissioned her to paint a 50-foot long mural as an uplifting and encouraging message for everyone in Winston-Salem.

A series of paint stirring sticks is laid out on Jessica Singerman's work table as she paints a mural on the Long Branch Trail.