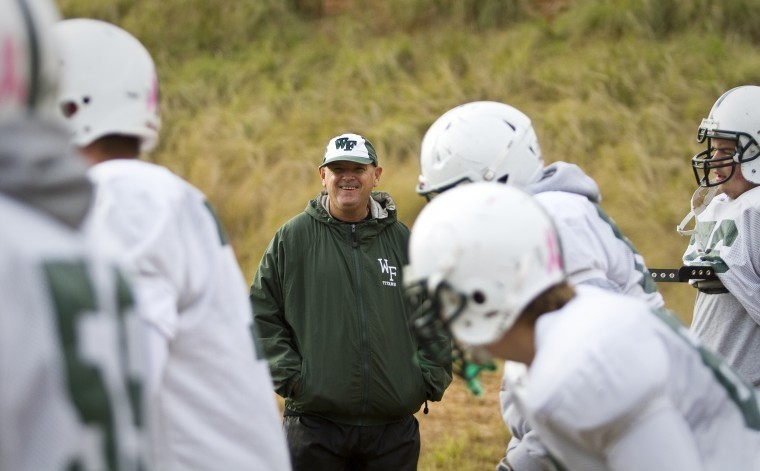 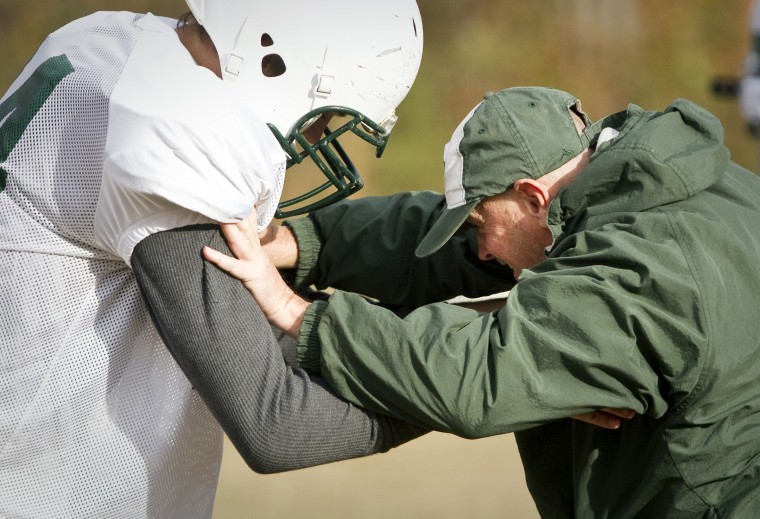 Murphy laughs as he fills in as a linebacker

CLEMMONS Back when Dave McConnell was the football coach at Reynolds High School in the early 1990s, he returned to Winston-Salem late after a first-round playoff loss at Shelby Crest.

Reynolds had been undefeated until losing its final two games, and McConnell, crestfallen, was leaving school that night with neighbor Pat Murphy in his car. McConnell said his disappointment was evident.

“Murph said ‘Dave, who do we open up with next season?’” McConnell recalled recently, telling Murphy that the opponent was Parkland.

“And he said ‘They’re going down.’

“No matter how bad your problem is, he will make you feel good.”

But everyone at West Forsyth knows it’s Murphy, 54 and always dressed as a West coach, who believes in the depths of his heart that the Titans will always win.

Joe Murphy, Pat’s 80-year-old father, said that Pat was stricken with a mental disability at birth. He’s the one who drives his son across the street every afternoon at 2 to the high school, so Pat can get to work.

“I couldn’t have asked for anything better to happen,” Joe Murphy said. “He has something to do every day, and it’s something he loves to do. And he eats and breathes West Forsyth sports.”

McConnell, who eventually moved from Reynolds to West Forsyth, hasn’t coached at West since 2007. He lives two doors down from Murph, who lives with his parents.

Soon after the Murphys moved to Clemmons, McConnell said he was driving down his street on the way to a softball game and saw Murph in the front yard. McConnell stopped to say hello.

“I realized he was a little different,” McConnell said.

He wound up taking Murph to the softball game that night and made him a third-base coach. That’s how the friendship was born.

In between, Murph has coached with McConnell at three high schools. He also has helped coach Pop Warner football, and he helps Kevin McIntosh, West’s assistant baseball coach, coach American Legion baseball in the summer.

But it’s everything related to West Forsyth that has become Murphy’s life over the last 20 or so years.

McConnell was involved a serious automobile accident in 2002.

“My wife stayed home with me for three weeks,” McConnell said. “She had to go back to work on March 1. From then until June when I could walk, at 7 every morning, my front door would open, and (Murph) would say, ‘Dave I’m here.’ And he would stay until Tammy got home in the afternoon.

“He would make me a peanut-butter-and-jelly sandwich. I would go to the bathroom in a bottle, and he would go empty it. He was here every single day.”

And T.R. Richards, the athletics director at West, said that it’s very important when introducing someone to Murph to use the name by which that person wants to be called. The reason? If it’s not done right the first time, it’s too late.

“He called (Kurt Telford, West’s former principal) Telford,” Richards said. “The first time I heard him say it, I thought it might be disrespectful. But it wasn’t. It’s just Pat. If you are really having a bad day, just go hang out with Pat a little while. You’ll be all right.”

There’s a running joke at West that the coaches threaten to trade Murph to Mount Tabor or Reagan for two flat footballs and a used mouthpiece.

His response is always the same. “I’m not going,” Murph says.

Jim Coghill, West’s longtime trainer, said that Murph has become a real friend while helping him through the years.

“He has always been so positive, so kind, and he never forgets things,” Coghill said.

He also doesn’t forget coaches at opposing high schools, and he never fails to tell them their fate.

“He’s not afraid to tell them that they’re ‘Going down,’” McConnell said.

“I have been here seven years, and I cannot remember anybody ever making fun of Murph,” Snow said. “If anyone ever did … it would be on. It would be on with our guys.

“It’s a love. I can’t think of anyone that doesn’t love Murphy.”

There’s no question that the relationship between Murphy and West Forsyth is a two-way street.

“He’s gotten so much more confident in his appearance,” Joe Murphy said of Pat. “He never doubts himself anymore. He’s Coach Murphy, by golly.

“He has so much confidence and so many friends. It really helps.”

The Chris Paul that I got to know

Tennis star Naomi Osaka has lit the cauldron at the Tokyo Games, ending the flame’s journey from Greece to these delayed Olympics. Relive the opening ceremony, in photos.

Eastern Guilford's Hezekia Newby and North Davidson's Jake Marion account for all the points in the All-Star football game at Grimsley's Jamieson Stadium.

Appalachian State picked as co-favorite in its division; nine projected for All-Sun Belt

The Mountaineers' season will open on Sept. 2.

MILWAUKEE — As the final buzzer sounded, a stone-faced Chris Paul slowly walked off the court, down the tunnel and into the locker room.

Terquavion Smith scores 30 points to lead the East to a 116-92 win over Breon Pass and the West, but "it's all love," Smith says.

The Tokyo Olympics saw a full slate of action Saturday with a rebound U.S. women's soccer win and the first medals of the Games. Here's the latest.

Scott Satterfield is in favor of an expanded college football playoff. Mainly because he’s knows how special a run through a bracket can be.

Murphy laughs as he fills in as a linebacker