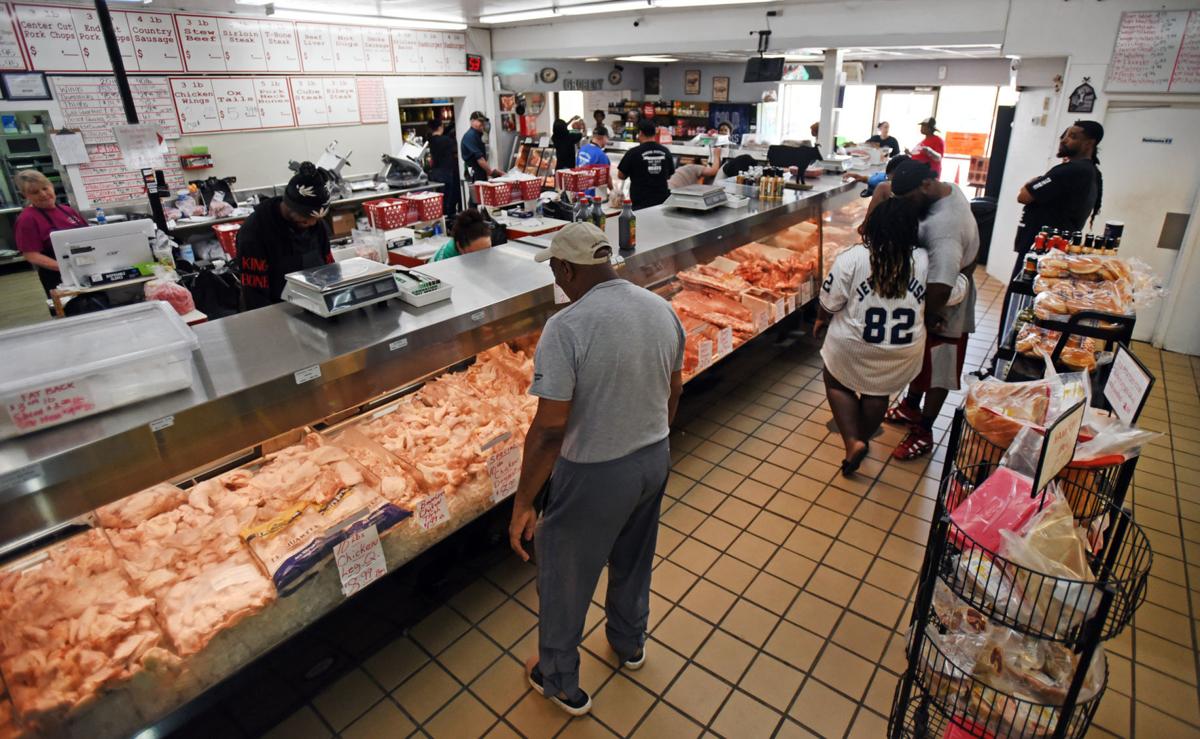 While many of the regional and national chain supermarkets have been low or out of meat because of panic shopping in light of coronavirus concerns, Ogburn Station Meat Market, Saturday, March 28, 2020, has been fully stocked and doing a brisk business. 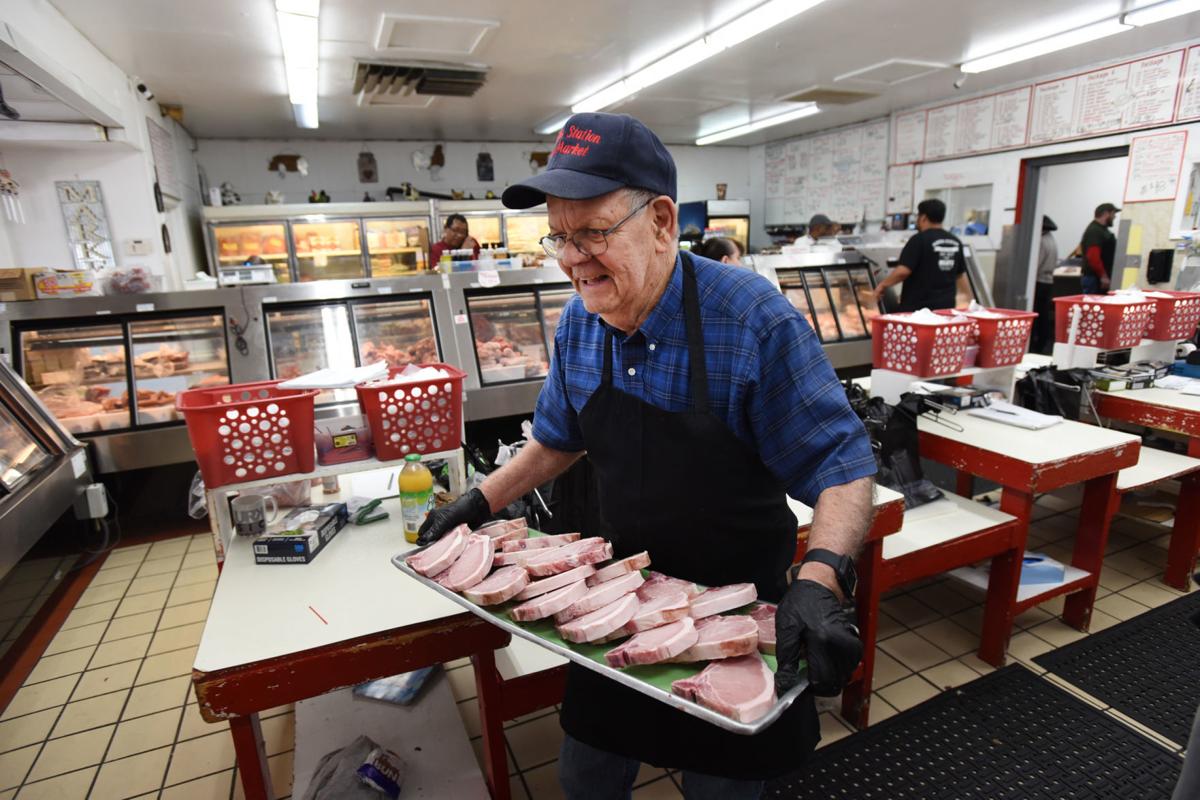 Ogburn Station Meat Market owner Herman Barker moves pork chops to the display cabinet on Saturday. Barker has been owner or co-owner of the store since 1975.

Because of spotty selections in the meat departments of major supermarkets, consumers have turned to alternative sources of meat, including the old-fashioned butcher shop.

One such shop is Winston-Salem's Ogburn Station Meat Market, which has been in business for 45 years, but for the most part maintains a quiet presence in the Ogburn Station neighborhood, around the corner from Pulliams Hot Dogs & BBQ and Taste of the Triad restaurant (the former Malone’s and Bell Brothers).

But the market hasn’t been quiet lately.

“Off the chain” is how co-owner Kim Drye described business this week. “We’ve never had so many new customers.”

Drye, working her 19th straight day Monday, said lines have stretched across the parking lot at times. “We had to take the phone off the hook for five days, because every time you’d hang it up it would ring again.”

Drye, 54, co-owns the market with her father, 77-year-old Herman Barker. Her 31-year-old nephew, Seth Barker, is the general manager. “I cut a lot of the meat. I do all the ordering. I do a little bit of everything,” Seth Barker said. “I’ve never seen it like this.”

Ogburn Station Meat Market was founded in the summer of 1975 by three butchers.

Herman Barker, Johnny Metts and Bobby Holbrook were all A&P veterans of 10 years or more the day they opened the doors on their new business, about six months after A&P laid them off when it pulled out of Winston-Salem for good.

From the beginning, the three butchers offered customers personal service and competitive prices.

The COVID-19 pandemic has brought them several challenges. Perhaps foremost among those for Drye and Seth Barker is getting Herman Barker to stay home. “He’d be working 60 hours a week if we let him,” Seth Barker said.

“He’s usually going at it 11 hours a day,” Drye said, despite the fact that he has been diagnosed with leukemia.

In other words, Herman Barker is in the high-risk category for COVID-19 in more ways than one — which is why family members are working hard to keep him home and safe.

The market sells a full selection of beef, pork, chicken and fish, as well as a few other items, including hoop cheese, frozen french fries and canned beans. “People like that we can do different cuts, whatever you want. It’s not all pre-wrapped,” Drye said.

Though the market offers the amenities of an old-fashioned butcher, it has added some up-to-the-minute practices to cope with the coronavirus pandemic.

Orange lines on the sidewalk help keep customers at a distance from one another. There is pretty much always a line, partly because the front door is locked.

Customers must wait outside until they are admitted, one at a time. That’s to keep the maximum number of customers to 10 — one for each staff member. So when an employee is done serving one customer, the next is allowed in. When customers enter, they are asked to sanitize their hands, using the sanitizer unit on the wall.

“We’re closing an hour early so we can do extra cleaning,” Drye said. “We’re also coming in Sundays to wash and sanitize everything.”

To help manage inventory, they also set limits of 10 pounds per item for each customer.

The market still takes cash, and it hasn’t adopted curbside or delivery, mainly because it lacks the staff. But it started accepting call-in orders to streamline service.

Other stores, such as Olde World Meat Market in Davidson County, have reported boosts in sales, too, but they also have suffered supply problems similar to those of supermarkets.

Ogburn Station has had better luck. “It was rough when this thing kicked off. I was hopping from vendor to vendor,” Barker said. “The toughest thing was making sure we had variety. But it’s pretty much smoothed out now. These past few days, whatever I’ve asked for, I’ve gotten. I think things are calmed down now.”

That’s good news for such customers as Antone Flowers. He described himself as a regular but hadn’t been in the store in a while.

“I haven’t had ground beef in so long. I couldn’t get it in the grocery store,” he said. “I was a little bit scared at first, because I thought it would be really crowded, but they got it worked out. They have hand sanitizer and everything.”

“I come in once a month,” he said. “I was raised on quality meat, and It’s cheaper here. You get a lot more for your money.”

Among first-time customers this week was Jerry Moore, who drove from Salisbury with his wife, Renee, and brother, James. “In Salisbury, we had to go to three or four stores to try to get anything,” Renee Moore said. “You can tell the meat is fresh here, and the service was real good.”

They heard about Ogburn Station Meat Market on Facebook and made the trip, filling up a large cooler. “I just spent $234,” James Moore said, checking his receipt.

Seth Barker said he’s encountered customers coming from as far away as Charlotte, Asheville and Virginia. “We have people coming from all over,” he said. “I hope we can make customers comfortable. We’re cleaning everything constantly.”

Drye said the market has two simple reasons for its success — and those hold true during the pandemic. “We’ve always tried to be a little cheaper than the grocery stores,” she said. “And there’s nothing like the taste of fresh meat.”

While many of the regional and national chain supermarkets have been low or out of meat because of panic shopping in light of coronavirus concerns, Ogburn Station Meat Market, Saturday, March 28, 2020, has been fully stocked and doing a brisk business.

Ogburn Station Meat Market owner Herman Barker moves pork chops to the display cabinet on Saturday. Barker has been owner or co-owner of the store since 1975.