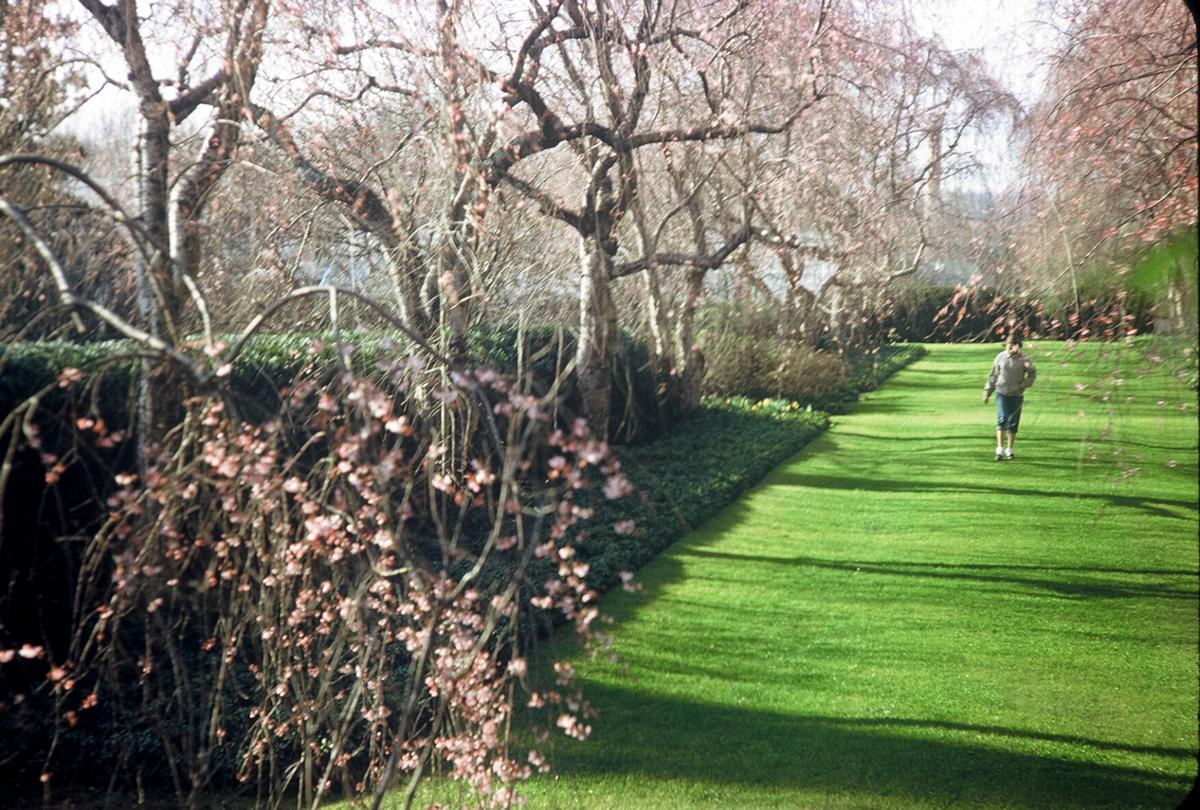 In these pictures taken by her mother, Katie Babcock (oldest daughter of Mary and Charlie Babcock, probably about age 12 in this photo) walks in the upper garden shown as Plan “D” in the original Thomas Sears drawings of 1917. 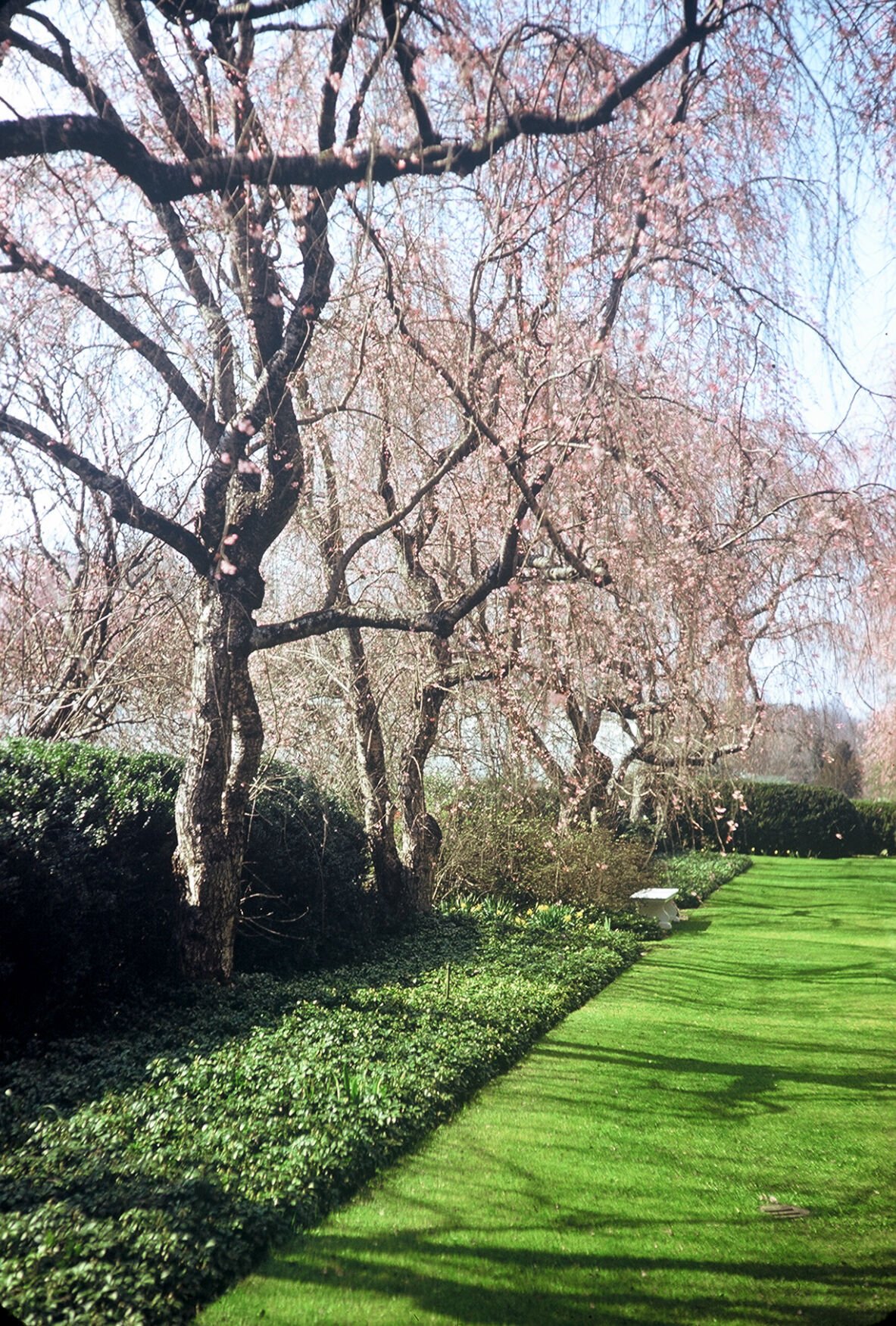 By the 1940s, the original under plantings of the trees had been removed and replaced with ivy. The iris beds and other surrounding perennials had also been removed. The remnants of the iris beds can barely be seen under the grass. The bench at the far end looks unusually low because, by this time, the benches had been shortened as the legs decayed. 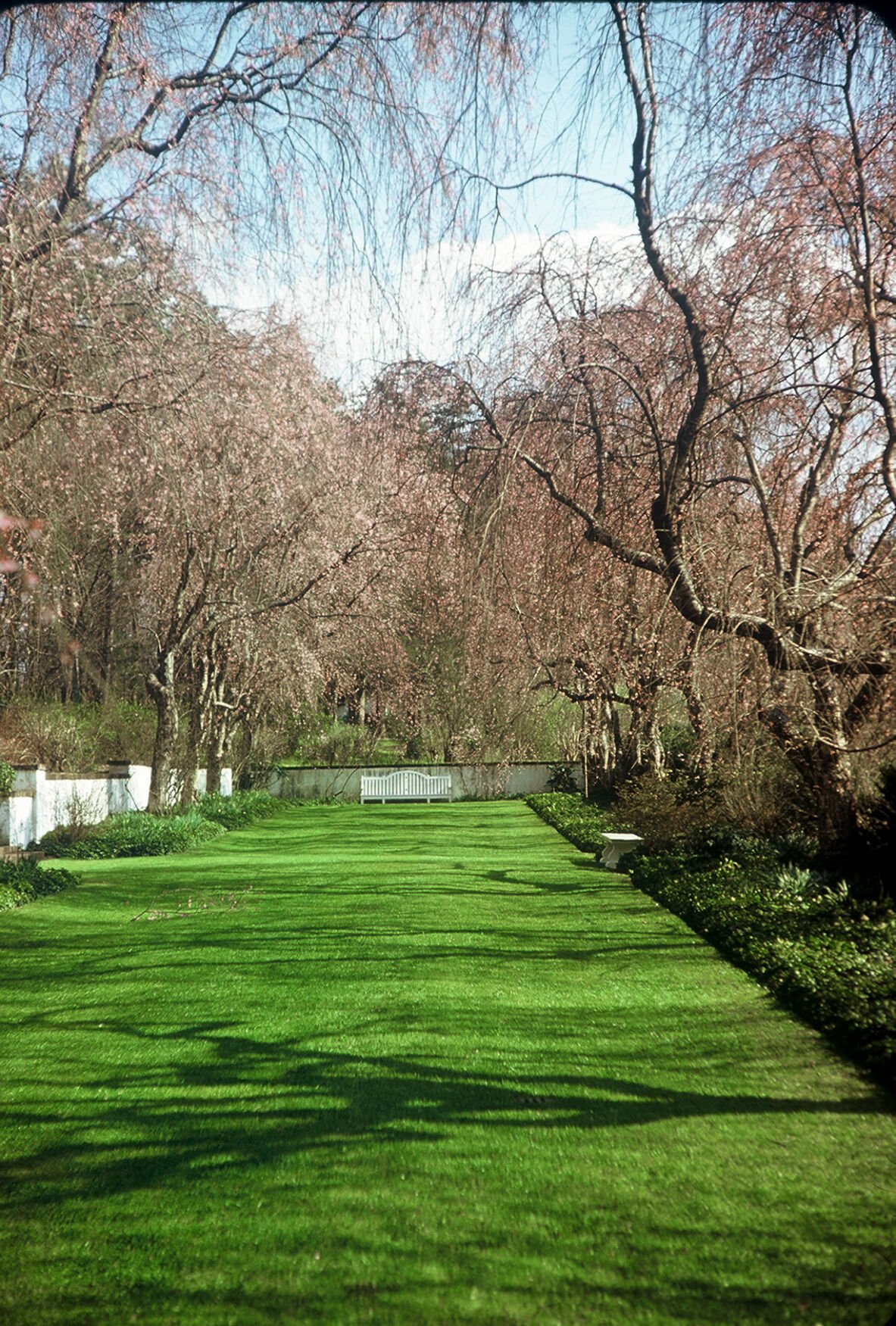 Like her mother, Mary Reynolds Babcock loved the gardens. By the time these photos were taken, however, the gardens had been simplified because of the cost of maintenance and because labor was hard to find in World War II. 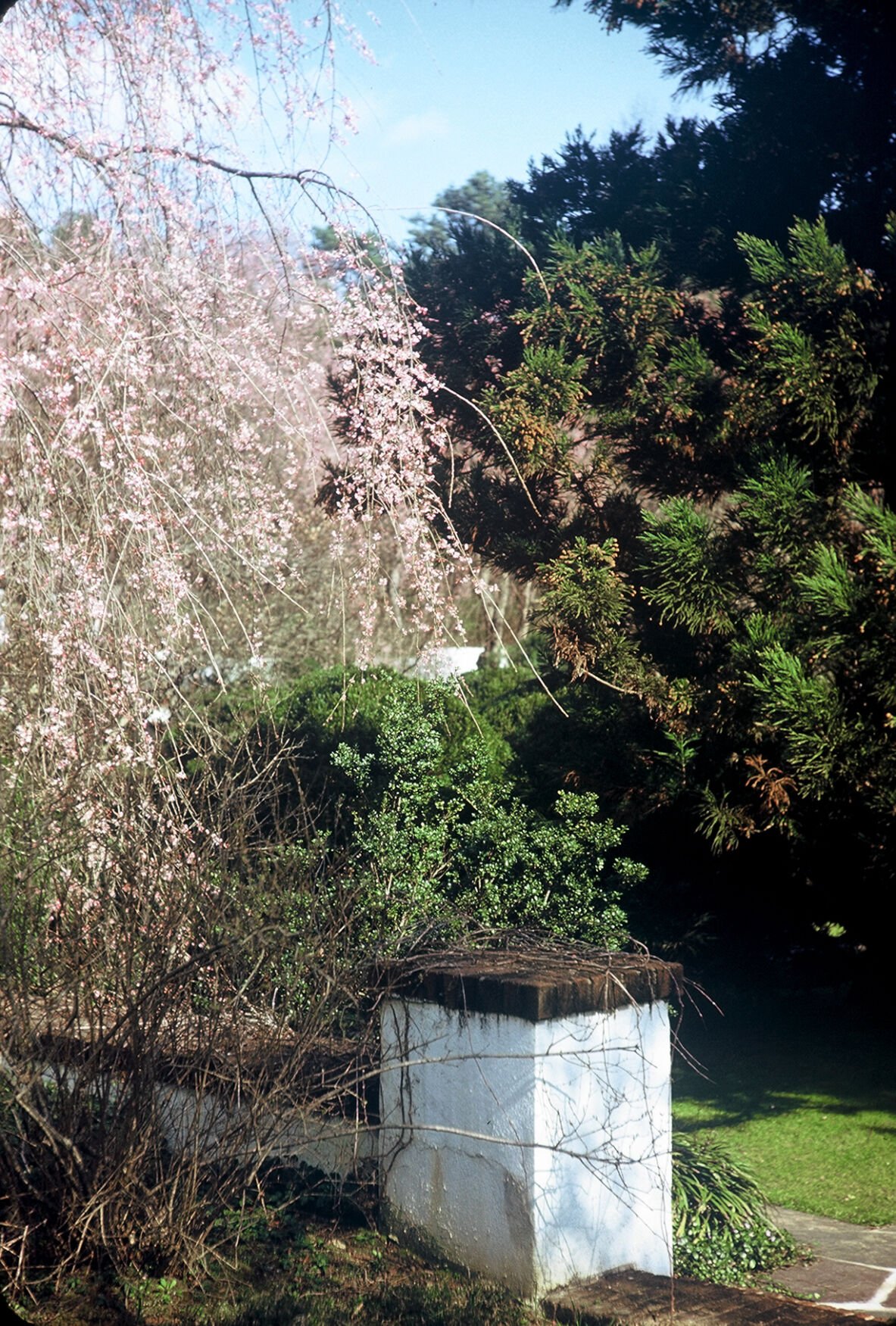 Cherries are one of the earliest bloomers and show well in contrast to the greenery of the boxwood and cryptomeria. The cryptomeria, a Japanese tree, shows winter damage. 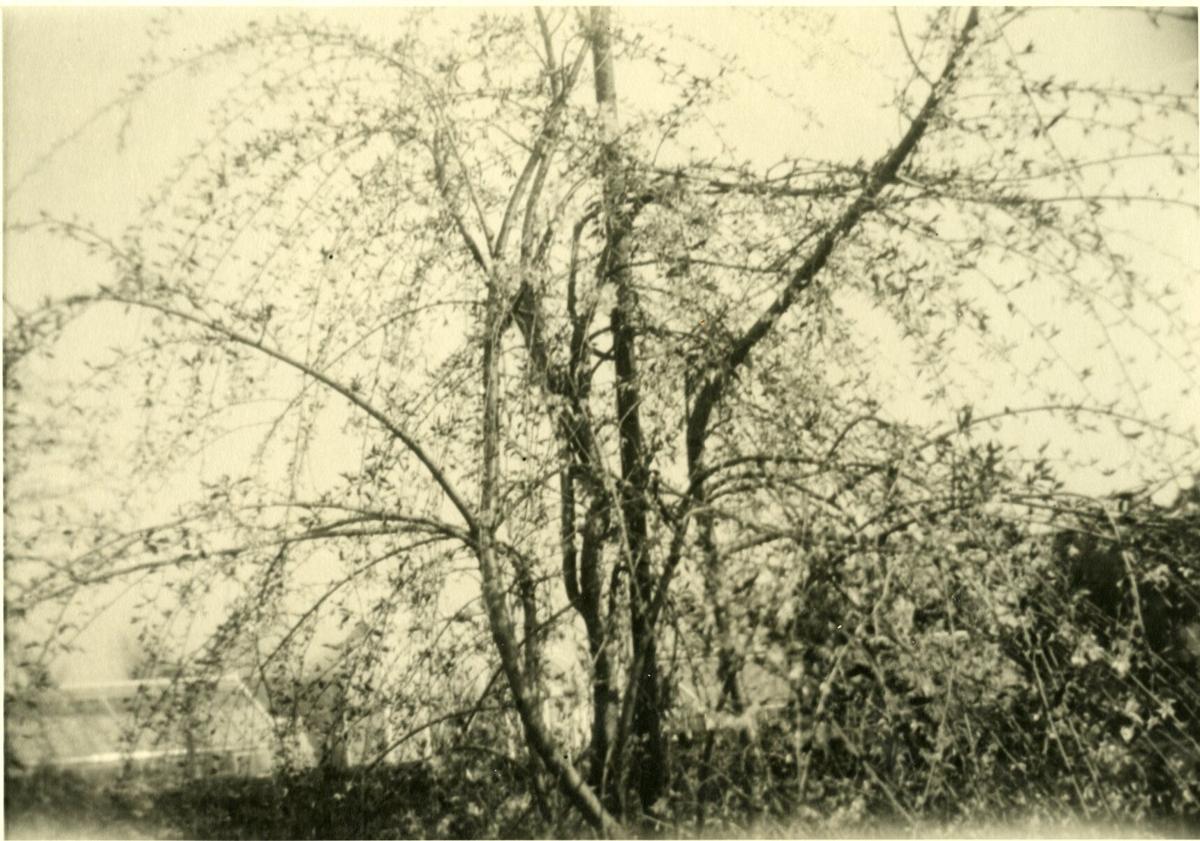 Cherry trees near Reynolda greenhouse, circa 1921. 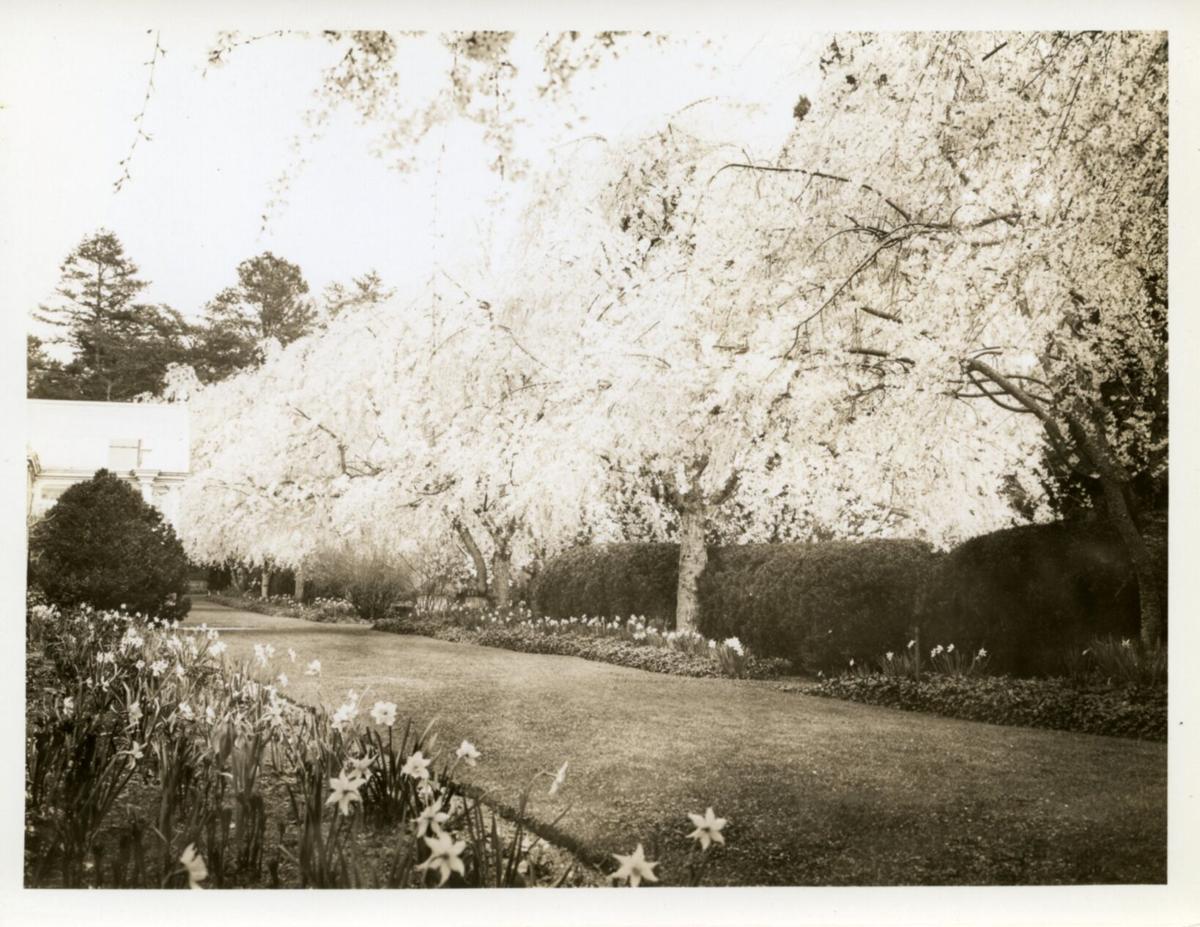 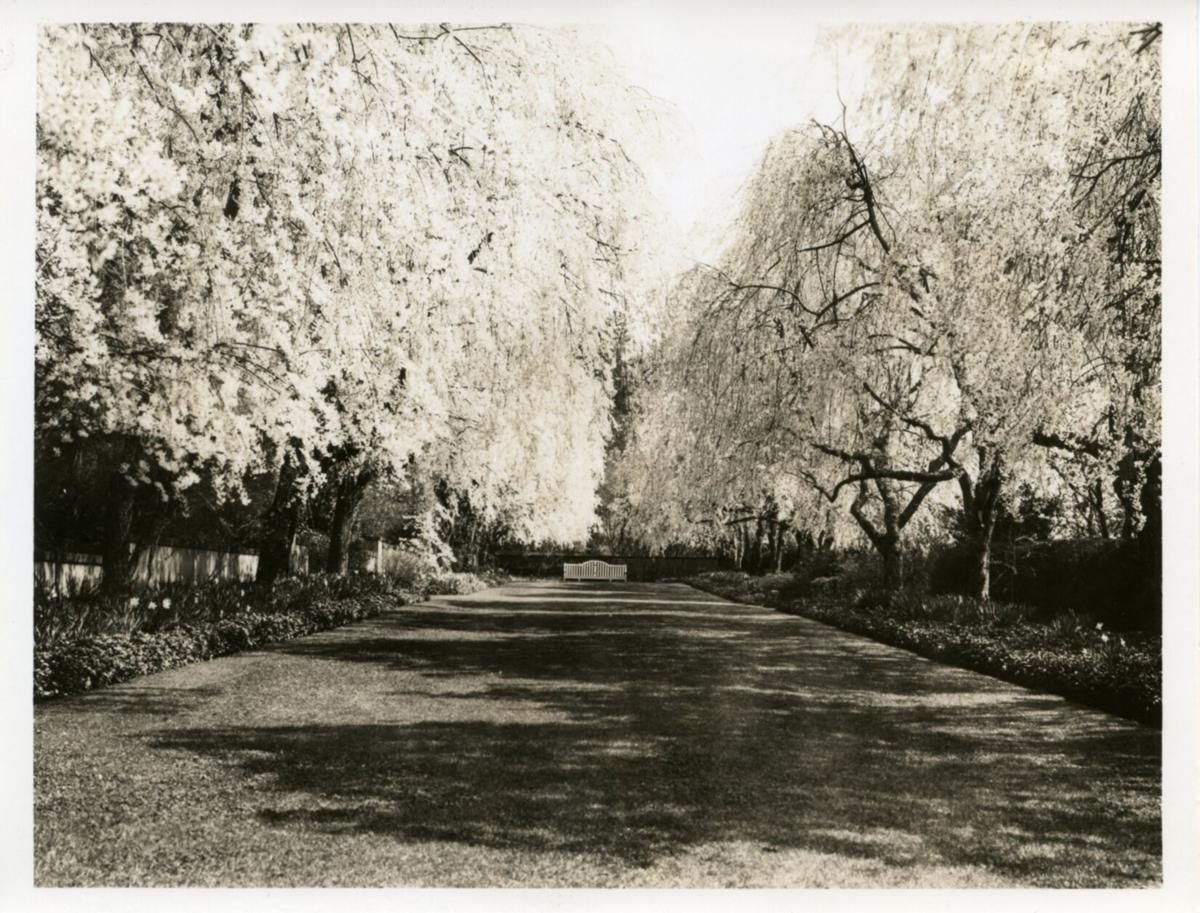 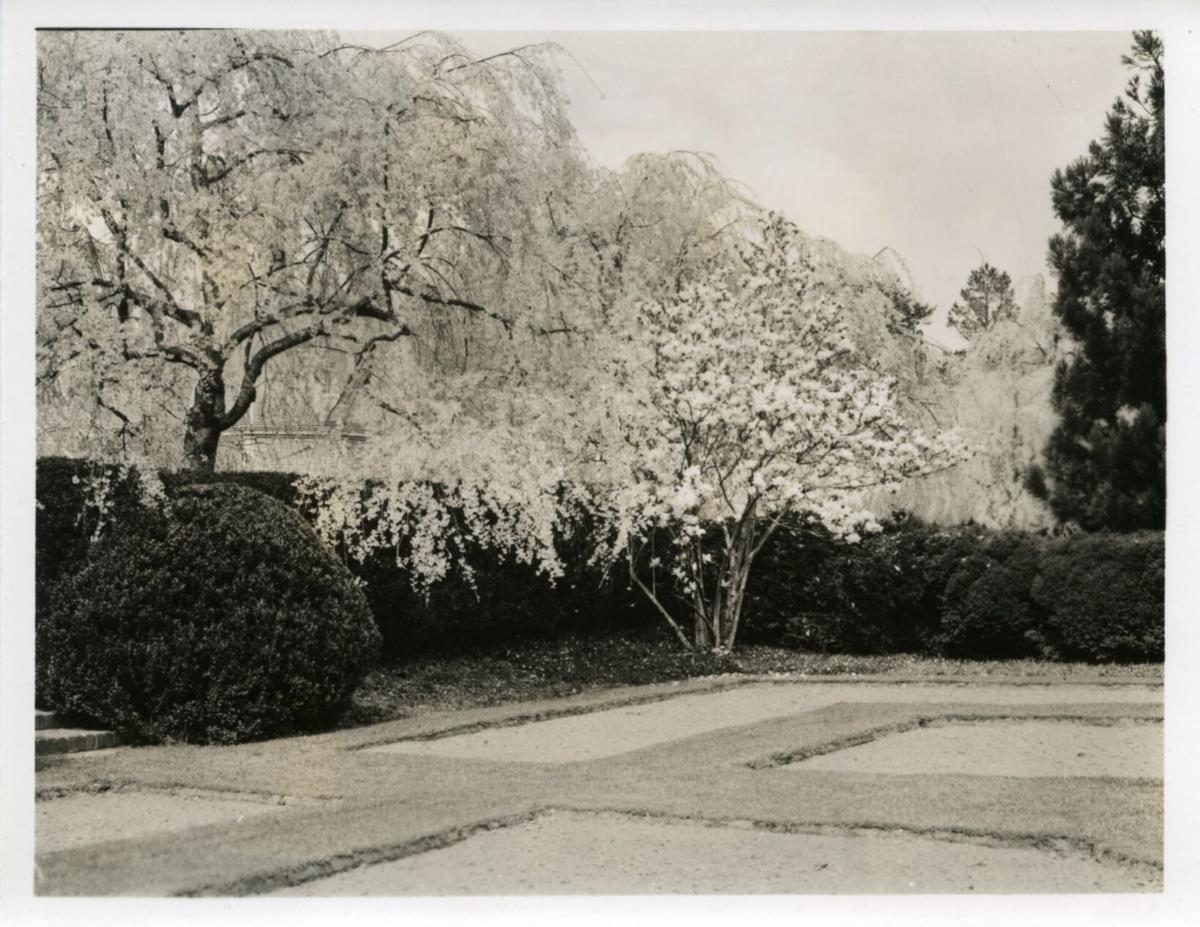 Reynolda Gardens is perhaps the most iconic public garden space in Winston-Salem, an area that draws visitors year-round. Originally, the estate of R.J. and Katharine Reynolds, Reynolda Gardens is made up of 134 acres of formal and greater gardens.

With its roots more than 100 years old, time has taken an inevitable toll on parts of the gardens. Gardens naturally change overtime — plants can outgrow their settings, trees can age out and weather patterns can cause challenges. So, in response, Reynolda Gardens has a lot of changes on the horizon.

Projects are already underway in the formal gardens. A complete renovation of the weeping cherry trees should start next week, which will restore the emblematic seasonal bloom to the north, east and west sides of the formal greenhouse garden. The cherry tree project was made possible through the support of Barbara and Nik Millhouse.

“This is one project of several that we feel will make an impact, showing to the public that there's investment going into the gardens,” said Reynolda Gardens Director Jon Roethling. “We've called the program 'Grow with Reynolda Gardens.'”

These weeping Japanese cherry trees have long been a focal point for garden visitors, as their bountiful spring blooms are felt as a herald of spring. Historically, many people associate Reynolda Gardens with a magical tunnel of cherry blossoms. A 1958 Raleigh News and Observer article said of Reynolda Gardens “long a spot for spring sightseers, the gardens are noted primarily for a profusion of weeping Japanese cherry trees.”

Over the years, though, the cherry trees have aged out, which is very typical of certain ornamental trees. Roethling explained that although an oak can live 100 years, a flowering cherry may only live 25 years. The original trees have long since aged out, and the mature ones still existing in the garden are at the end of their life.

“I envision what is supposed to be here is a formal alley of weeping cherries, but what we have is some older ones and then some very young ones,” Roethling said. “So, the actual design is not present. You're not getting the intended feel of this space. Even though I'm trying to look at this garden through a modern-day lens, I am also trying to always respect what the intent is and what the feel of these different spaces is supposed to be.”

Forty-four trees will be planted — six parallel to the greenhouses and 19 along the east and west sides of the greenhouse gardens. The same variety will replace what will be removed — prunus subhirtella 'Pendula,' also known as Weeping Higan Cherry. The new trees will be about 15 feet tall with a 4- to 5-inch trunk caliper.

But there is more to this cherry renovation than just planting new trees.

“Rather than just take the trees out and put new ones in, we're going whole hog in a sense,” Roethling said. “We're taking the old soil out, reworking the soil so there's really good drainage. We're going to do an anti-borer preventative on the trees.”

Roethling explained that large weeping cherries are susceptible to borers, insect attacks and disease. They also have a habit of prematurely dropping their leaves in late summer, long before any other tree. Using a combination of fresh new soil and preventative insect and disease treatments, the new cherries should be able to live long, healthy lives.

“The weeping Higan cherry is the worst in terms of susceptibility to a fungal leaf spot — which makes them drop their leaves. So, by starting with a clean slate with new soil, any fungal spores that might be inoculated in the top surface of the soil — hopefully those go away.”

So why not go with a better plant? Even with significant advancements in horticultural plant breeding, there just aren't a lot of options for a more disease-resistant variety of weeping cherry. All the newer cultivars are significantly smaller, growing only about 12 feet tall. The weeping Higan will grow to 40 feet tall.

“If we put them in, do a lot of preventative care and set them up for success, I'm hoping we'll stay ahead of any issues,” Roethling said.

Roethling says he visualizes these cherries not just in the formal gardens, but scattered throughout the greater gardens, as well.

“It's exciting," he said. "You won't have to drive to D.C. for a cherry blossom festival. Having this type of feature here spurs me even more to want to build a cherry collection on the property — the entire 134 acres.”

Removing the old trees and stumps, bringing in new soil, and installing the new large trees will greatly affect the public interaction with certain sections of the gardens. Roethling anticipates that the brunt of the project will be wrapped up before the end of the year, though. During the process, parking and access into the greenhouse gardens will be limited.

“Be prepared for part of the garden to be blocked off while work is going on,” Roethling said. “It will happen in phases — so we'll work on one side and get it all ready, then work on the other side. But it's also the downtime, when people are less likely to be coming and walking in the gardens.”

One collaborative element to this project is that the cherry wood from the oldest trees will be salvaged and used by local artisans as a way to preserve Reynolda history.

In addition to the cherry tree renovation, there are other projects already in the works. All the tea houses in the formal gardens are getting a facelift, including new cedar roofs, paint and plantings.

“We've got the tea house renovation that's going on right now, too,” Roethling said. “That's courtesy of Wendy and Mike Brenner. We also have projects looking at the greater gardens. We've got funding to allow us to start work on rehab of the trails where they're in really bad shape. Also, adding a boardwalk up along Coliseum Drive where the trail is perpetually wet.”

The formal and greater gardens of Reynolda have served as a place of sanctuary and peace for locals and visitors. These projects will make this public space even better.

“What's nice is that we're seeing members of the community that realize the value of Reynolda Gardens,” Roethling said. “They're stepping up to make sure that it's there for the community.”

Amy Dixon is an assistant horticulturist at Reynolda Gardens of Wake Forest University. Gardening questions or story ideas can be sent to her at www.facebook.com/WSJAmyDixon or news@wsjournal.com, with "gardening" in the subject line. Or write to Amy Dixon in care of Features, Winston-Salem Journal, 418 N. Marshall St., Winston-Salem, NC 27101

Lower your cholesterol by eating these foods

Lower your cholesterol by eating these foods

These everyday items are about to get more expensive

These everyday items are about to get more expensive

You should buy these items at yard sales

You should buy these items at yard sales

Putting the asparagus bed to bed

One of the greatest joys of my home garden is my asparagus bed. Planted for about seven years now, this patch of perennial goodness just keeps…

Get an early start to see variety during birdwatching

Although summer is still a few weeks away, mid-day temperatures feel like we’re already there. So it’s wise to get an early start if you want …

How to choose the best spray faucet for your kitchen

Many pull-down and pullout kitchen faucets have different spray head features from which to choose. Here are some options to consider.

Rethinking the landscape with native plants

A few weeks ago, my husband and I tackled our annual chore of trimming the foundation shrubs around the front of our house. Most all planted b…

Even before you walk into their garden, you get a feeling that they have a love for the beach.

Hurricane season 2021: What do you put in your first-aid kit?

Stock your first-aid kit and store in a waterproof container • First-aid manual. • Sterile adhesive bandages in assorted sizes. • Sterile gauze pads and roller bandages in a variety of sizes. • Hypoallergenic adhesive tape. • Scissors and tweezers. • Needle, for sewing and removing splinters. • Bars of soap in their own plastic bags or waterproof containers. • Moist towelettes. • Antiseptic ...

Kovels Antiques: Victorian furnituremakers used details to keep furniture from being too plain and dark

Victorian furniture was larger, heavier and usually darker and much more ornate than the mid-century or even modern pieces used today. The hou…

Earth Talk: What is a 'pollinator lawn' and how can I make one?

Turning your own lawn into a pollinator or “bee” lawn can help restore the kinds of natural habitat no longer available to pollinators.

Maybe you snuck into your neighbor’s swimming pool when you were a kid. Perhaps you jumped on their trampoline when they weren’t around or used their pile of random junk…

Comfort height toilets: What to consider before getting one

Most comfort height toilets are about the same height as a standard dining room chair, commonly called "chair height."

In these pictures taken by her mother, Katie Babcock (oldest daughter of Mary and Charlie Babcock, probably about age 12 in this photo) walks in the upper garden shown as Plan “D” in the original Thomas Sears drawings of 1917.

By the 1940s, the original under plantings of the trees had been removed and replaced with ivy. The iris beds and other surrounding perennials had also been removed. The remnants of the iris beds can barely be seen under the grass. The bench at the far end looks unusually low because, by this time, the benches had been shortened as the legs decayed.

Like her mother, Mary Reynolds Babcock loved the gardens. By the time these photos were taken, however, the gardens had been simplified because of the cost of maintenance and because labor was hard to find in World War II.

Cherries are one of the earliest bloomers and show well in contrast to the greenery of the boxwood and cryptomeria. The cryptomeria, a Japanese tree, shows winter damage.

Cherry trees near Reynolda greenhouse, circa 1921.