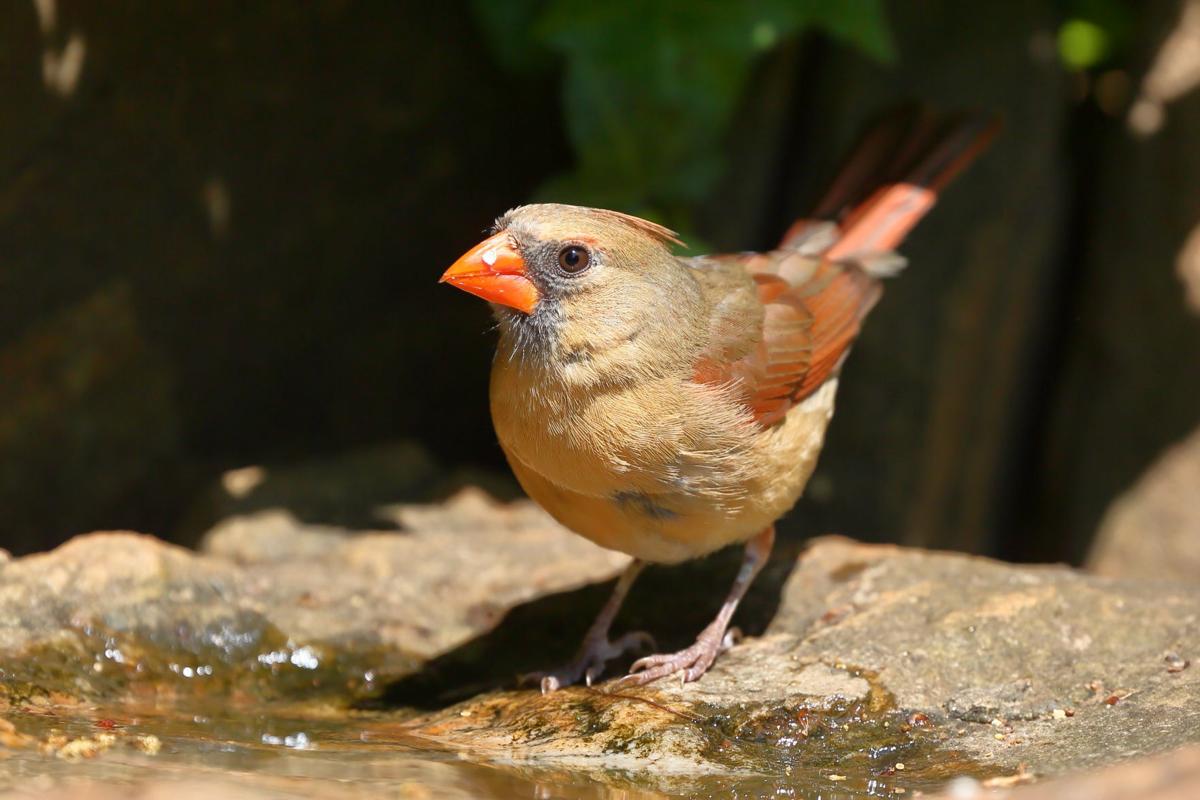 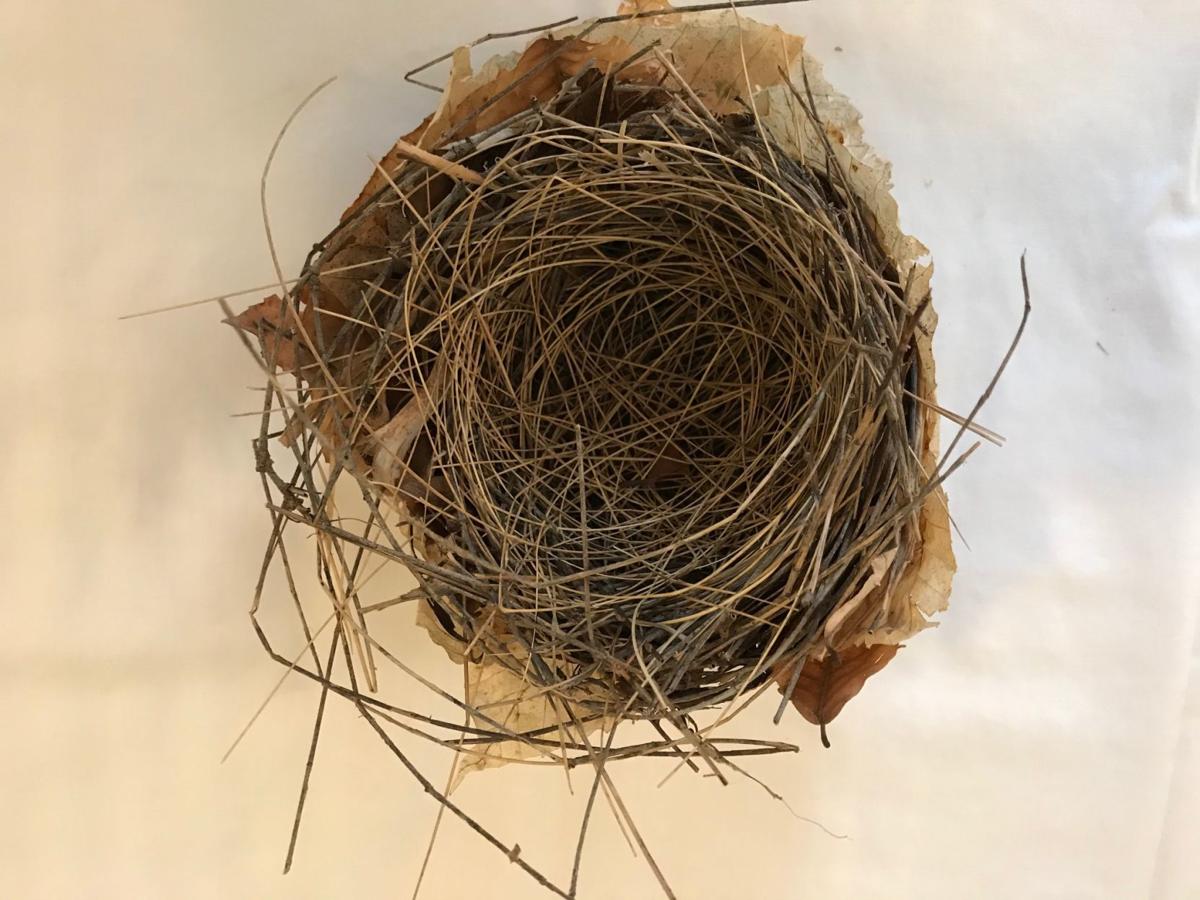 Cardinal’s nest includes a variety of materials, such as beech-tree leaves, pieces of daylily leaves, weed stems and more. Right: a female cardinal.

Cardinal’s nest includes a variety of materials, such as beech-tree leaves, pieces of daylily leaves, weed stems and more. Right: a female cardinal.

The practice of declaring state birds began in 1927 and two years later Illinois was the first of seven states — more than any other — to choose the cardinal as its avian representative. The other six states choosing the cardinal were Indiana, Kentucky, North Carolina (in 1943), Ohio, Virginia, and West Virginia.

And why not? It’s an eye-catching bird familiar to all and its boisterous singing makes certain it won’t be overlooked.

On one of our windy spring days an example of natural architecture was blown onto my lawn from a large shrub. A pair of cardinals chose the shrub for their nest site because it possessed several features necessary for a safe and secure location to start a family.

The evergreen shrub bore broad, shiny leaves that would hide the nest and the female as she sat on the eggs. Though you might think predators would be scarce in the city, raccoons, opossums, and worst of all — free-roaming housecats — are constant threats. Crows and jays often prey on eggs and nestlings as well, and so a well-hidden nest is crucial to successful nesting.

Those broad leaves would help shed rain, so abundant this spring, and would, ordinarily, shelter the nest from the wind. But this year’s winds battered us through March, April, and May and were just too much for the birds’ nest.

Birdsong’s primary functions are to attract a mate and lay claim to an area for nesting, and males are usually responsible for those tasks, so, it’s unusual that female cardinals sing about as much as males.

Both male and female sing — and they do it a lot. Each has about 12 different songs. Females often, but not always, sing the same songs as their mates. Once the female is incubating the eggs, she will sing from the nest in response to the male’s song. Cardinals aren’t the only female birds that sing. Others include rose-breasted grosbeaks and Baltimore orioles. But the songs of cardinals are among the most conspicuous we will hear in springtime and over the course of summer. They are both loud and frequent.

Of those dozen or so songs they sing, the one I hear most often can be described as “cheer cheer wit wit wit wit,” with the “wit” sometimes in a series of 10 or 15 phrases. The mnemonic of another common cardinal song goes something like “purty-purty-purty-purty,” again each phrase repeated many times in rapid succession.

The female cardinal does all the nest-building but the male feeds her while she is working. It takes her a little over a week — sometimes less — to build the nest. The cardinal attempting to nest in my yard must have just completed this one; there was no evidence of eggs or chicks when I found it.

Had the nest survived the wind, the female would have laid her eggs, usually two or three, over the next few days and then incubated them for 11 to 13 days. Only the female incubates but the male continues to bring her food; he may sit on the nest briefly while the she takes a break.

But, had I put the nest back exactly where the female built it, she still wouldn’t have tried to use it. Once a nest is abandoned, whether it had been successful or not, it wouldn’t be used again. So, I took advantage of the opportunity to disassemble the nest to better understand the effort that the female cardinal went to.

The outer layer was made entirely of a beech tree’s pale brown leaves — those that cling to the tree through the winter, only to be released as new ones emerge in spring. These 26 leaves, dead as are all components of the nest, seemed to be carefully glued together and formed the base for the other layers. The next appeared to be fragments of daylily leaves. When alive, these are fully two feet long, but the 46 pieces chosen by the female cardinal were just three or four inches.

The third layer was composed of thin weed stems, again 46 of them, some up to a foot long, carefully woven into the cup-shaped nest.

The fourth and finale layer was built of still finer stems, these just two or three inches long, numbering about 130.

Thus, the female would have carefully selected 248 pieces of dead vegetation and carried them in her beak to the nest site, meticulously working each into the gradually forming structure, settling into the nest and pressing her breast against the inside so as to mold it into just the right shape and dimensions — a lot of work just to have it blown out of the shrub and rendered useless.

Like most female birds, cardinals undergo physical changes in preparation for incubating their eggs. A few days before incubation begins, the female loses a patch of feathers from her breast. The bare skin, called a brood patch or incubation patch, becomes thickened and rich with blood vessels. These changes facilitate the transfer of heat from the female to the egg, warmth that is essential to the development of the embryo.

After the eggs hatch, the female continues to sit on the nest, keeping the hatchlings warm, nestled against her while the male brings food to his mate and their progeny.

Chicks leave the nest at about one and a half weeks of age and already have short crests that give them a sort of surprised expression as if they’re thinking, “Where did Mom go?”

Once the youngsters are on their own, the parents start over again, with the female beginning to build a new nest less than three weeks after the chicks left. The pair will go through the entire cycle of nest-building, egg-laying, incubation, and care of the young two or three times in a season with the female doing most of the work.

For cardinals, truly, a mother’s work is never done.

If you have a birding question or story idea, write to Bird’s-Eye View in care of Features, Winston-Salem Journal, 418 N. Marshall St., Winston-Salem, N.C. 27101, or send an email to birding@wsjournal.com. Please type “birds” in the subject line.