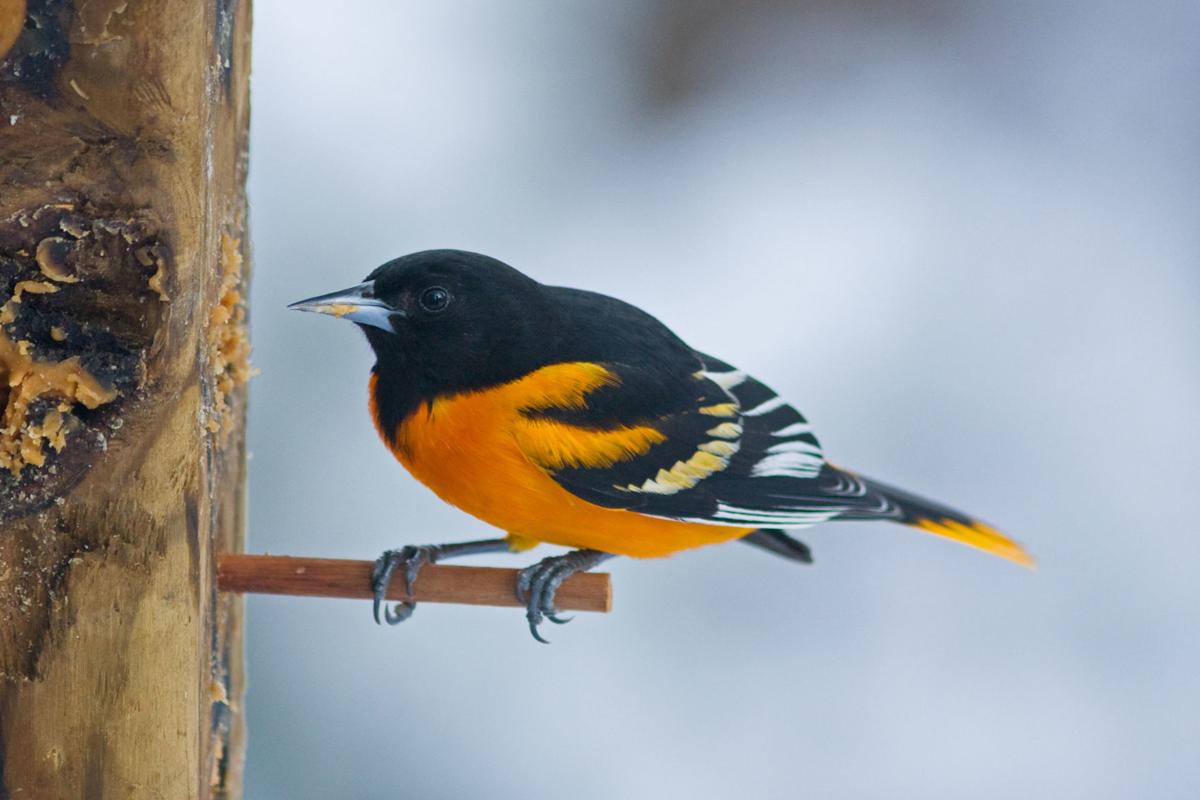 Sometime during the last week in April, a striking orange and black bird arrived at Tanglewood Park in Clemmons. It was familiar with the walnut trees along Mallard Lake because it and its mate had chosen the trees for their nest site the year before. The walnut trees weren’t fully in leaf in yet, but the birds were confident that their nest would be sufficiently hidden from any nest robbers, such as crows, by the time they had eggs or nestlings to be concerned about.

The male Baltimore oriole arrived first, and, after refueling following his long flight from Central Mexico, he promptly began singing his clear, whistled song to inform any other orioles that might be in the area that this grove of walnuts was already occupied.

His mate had arrived a few days later and soon set about building a nest. After finding a suitable location near the end of a horizontal branch about 30 feet up the tree, she began searching the neighborhood, returning with strips of plant fibers and animal hair, artfully weaving a hanging basket that would be the envy of basket-weavers everywhere, and she performed this artistry with only the crudest tools.

Like all songbirds, orioles are equipped with four toes, three forward and one back. The female oriole collects nesting materials and carries them to the nest site with her pointy beak, then uses her not very nimble toes to hold them in place while inserting and securing them into the growing structure with that same inflexible beak.

Baltimore orioles rarely nest in the North Carolina Piedmont, so it is unlikely that this pair at Mallard Lake will be bothered by any other orioles, but the male continues to sing just to ward off any intruder that might happen by and to reassure his mate that he’s on guard. He may provide nominal assistance by bringing a strand of nesting material to the female now and then, but singing is his primary job.

Meanwhile, the female continues to build the nest. While the end product is a marvel of nest-weaving skill, its aesthetic quality is, at best, of secondary importance. Its ability to shelter eggs and nestlings is job one.

Her first attempts at nest-building would have been made when she was only a year old when her skills were still developing. Spring storms buffeting Mallard Lake would bring winds that set the walnut trees in motion, branches tossing and swaying, the nest bobbing like a cork on a turbulent sea. An inadequate nest would be left in tatters by such storms, spilling eggs and nestlings to their doom.

But by her second year, if she survives that long, her skills will have improved. Strong winds will still give the nestlings a ride for their money, but likely just a thrill, not tragedy.

It takes the female about a week to construct the nest while making many trips with nesting material each day, finishing the gourd-shaped nest with softer materials for the lining.

As nest construction nears its conclusion and egg laying begins, the female undergoes some physical changes. She sheds some feathers on her breast and a concentration of blood vessels will develop in the bare skin producing a brood patch. When she nestles down on the eggs, this patch will come in contact with the eggs and the female’s body heat will stimulate development of the embryos.

The brood parch remains active until the hatchlings have grown enough to maintain their own body temperature. At that point, nestlings can be left alone while the mother searches for food to fuel their rapidly growing bodies. The blood vessels of her brood patch return to normal and feathers grow anew to cover the breast.

The male doesn’t develop a brood patch since he doesn’t participate in incubation, but he’s fully engaged in rearing the chicks. From hatching to fledging, the young birds — usually four or five of them — will be in the nest for about two weeks, and during that brief time, they will grow from two grams at hatching to nearly adult weight — doubling their weight four times in that short period.

That kind of growth requires a lot of food, and the parents will each have to make a dozen feeding trips each hour just to keep up with it. Makes stocking the fridge for your teenager seem easy, doesn’t it?

The work doesn’t end when the chicks leave the nest, though. The parents will continue to feed the fledglings for another two weeks. By the end of summer, the oriole pair will be ready to head south for the winter and a much-needed break from child-rearing.

If you have a birding question or story idea, write to Bird’s-Eye View in care of Features, Winston-Salem Journal, 418 N. Marshall St., Winston-Salem, N.C. 27101, or send an email to birding@wsjournal.com. Please type “birds” in the subject line.

Foods and drinks to help you sleep

Foods and drinks to help you sleep