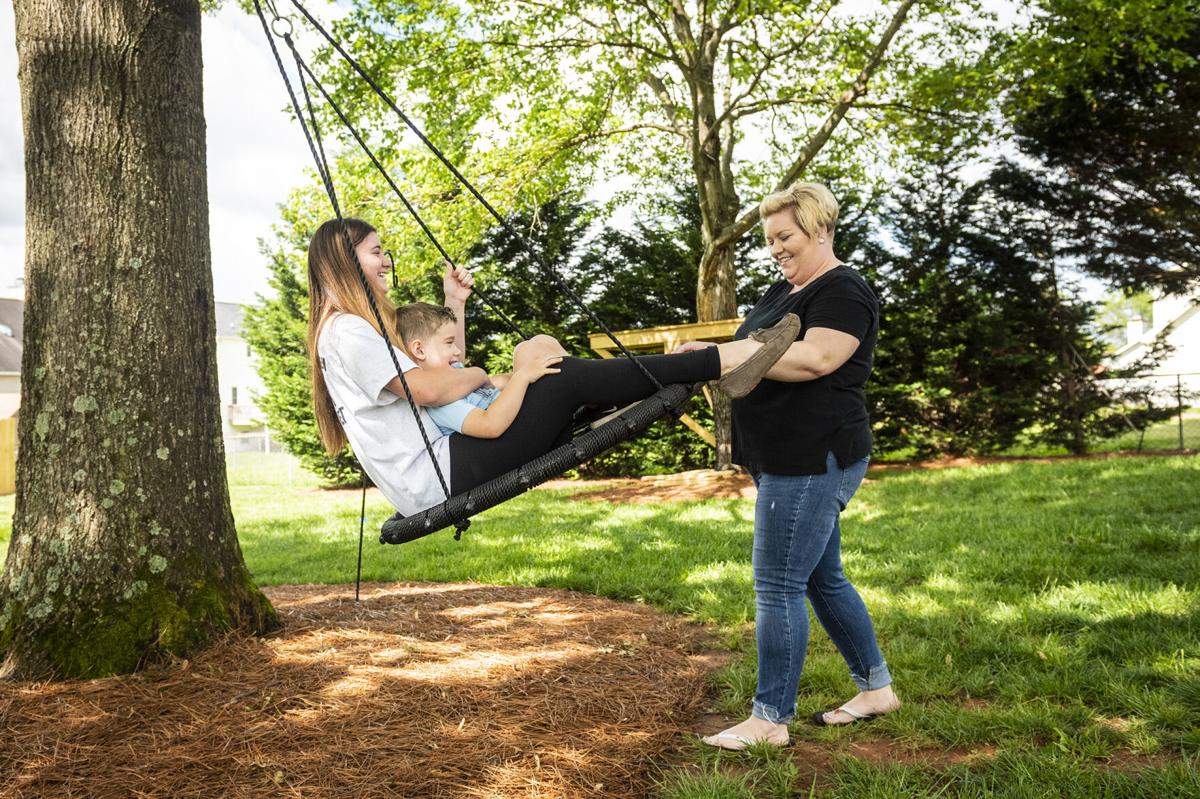 Jessica Simone, who recovered from the COVID-19 virus, pushes her children, Madylin and Bowen, in a swing in their backyard on April 24, 2020, in Winston-Salem. 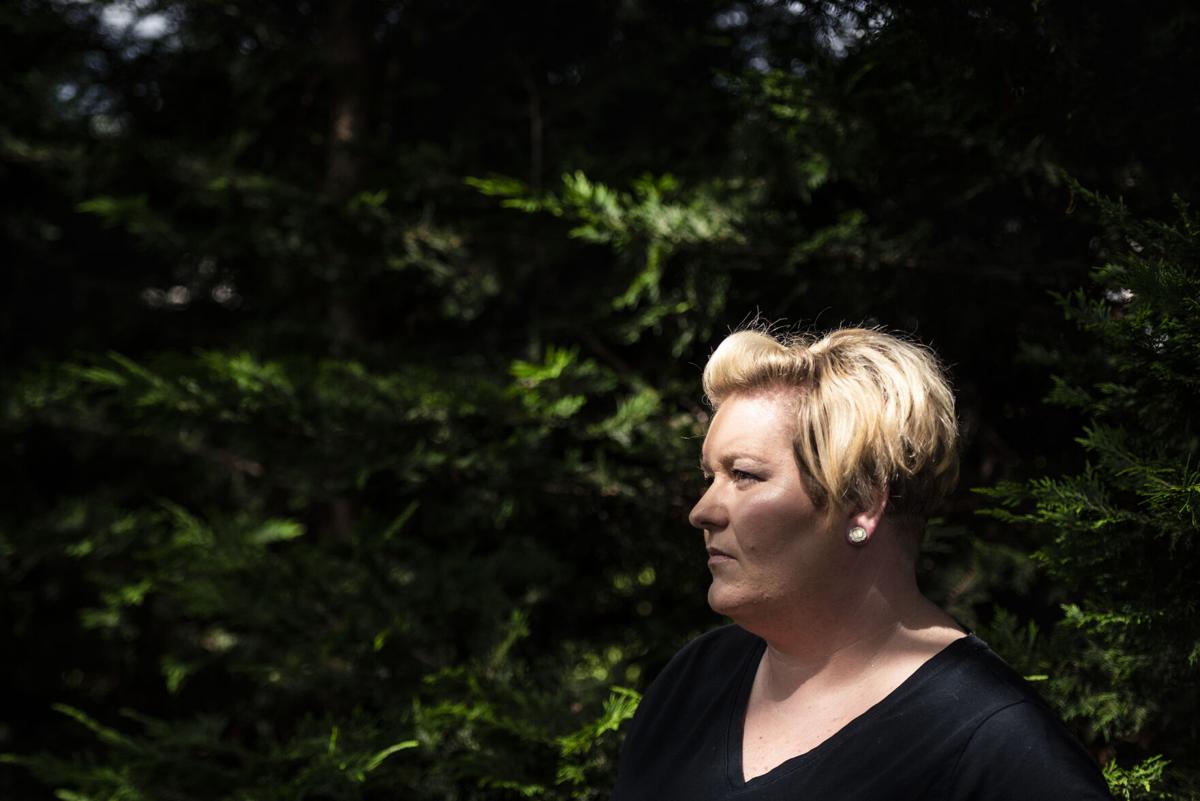 Jessica Simone, who recovered from COVID-19 virus, stands for a portrait on April 24, 2020, in Winston-Salem.

Jessica Simone stays busy. The incessant beeping audible over the cell indicated that she was on the go once again.

“Just got in the car,” she said. “But I’ve got a few minutes. Just heading down the street to my aunt’s house.”

It was a mundane trip for a young parent juggling competing demands of work, school and family.

But a year on from being the first person in Forsyth County hospitalized by COVID-19, Simone is thrilled by the smallest thing — even the ding-ding-ding of an open car door.

For two weeks in late March 2020, she lay alone in an ICU bed relying on a ventilator to draw breath. Twice she pulled the tube out herself while thrashing and hallucinating; nurses had to bind her hands to prevent recurrence.

So yes, a quick visit to a relative’s house on a Tuesday is worth savoring sometimes.

“I’d have to say I’m blessed more than most,” she said before buckling in and pulling out of her driveway. “I still have my family, and I’m still here.”

When Simone went to see a doctor on March 17 with the telltale symptoms of fever, body aches and a worsening cough, we were still 14 days away from Gov. Roy Cooper’s shutdown order taking effect.

But that was of little concern to Simone and her family. Her fever wouldn’t break, and her temperature actually rising. Her breathing grew increasingly labored.

Test results were difficult to come by, ventilators were a commodity and hospitals were still trying to figure out how best to treat patients. Simone didn’t yet meet fledgling protocols for admission, so it took a couple days before doctors ordered her admitted to Novant Forsyth Memorial Hospital.

That finally came on Saturday March 21. She was the eighth person diagnosed with COVID-19 in Forsyth County and the first to need an in-patient bed. She was 34 years old, married and had a 5-year-old at home.

It’d take a few days before she required ventilation. She was given oxygen and medicine for fever and anxiety.

“I did take a selfie with the oxygen in my nose,” she said in April 2020 following her release from the hospital. “I don’t remember those first few days.”

Her family, nurses and doctors filled in the blanks once she was well on the way to recovery. She didn’t recall the kicking, thrashing and fighting.

“I’m pretty sure they thought I was crazy,” she said last year. “I thought ‘Why are all these people in space suits and why are my hands tied down?’”

The vivid hallucinatory dreams, though, she remembers. She’d thought she’d been in a coma for years, that her husband Mike was an old man and that her 5-year-old boy was grown. She dreamed that someone was trying to kill her.

That all passed in time, and she was released April 9 to the great relief of her family.

“You hear about people in New York who never had the chance to say goodbye,” said Beth Masny, her mother, once Simone was at home. “I can’t imagine how awful that would be.’”

More than most, Simone is fully aware of the dangers of COVID-19, even as the availability of vaccinations increases with each passing week.

She knows, too, the lingering effects that can come after a serious bout.

“I’ve had some random small stuff,” she said last week.

All of which have raised more questions than concrete answers and visits to doctors who are learning along with their patients.

“I have to see a neuro-opthamologist. I didn’t know those even existed,” she said. (They are eye doctors who specialize in the treatment of vision problems caused by the nervous system.)

With more doctor visits come the inevitability of bills — and the attendant back-and-forth with insurance companies. Bills associated with the hospital stay have been pretty straightforward, but getting mental-health care for post-traumatic stress triggered by the hallucinations is a different matter altogether.

“I’ve been on the phone a lot,” she said. “PTSD is a longer term problem. I still wake up some nights screaming.”

All in all, though, Simone seems to be taking the healthiest approach by appreciating what she has in the context of what could have been. Knowing that she dodged the fate of more than 546,000 Americans dead from COVID-19 has a clarifying effect.

“Anytime any of this starts to seem stressful, I make myself think about how blessed I am to be alive.”

Thomas Martens and Molly Martens Corbett are out on bond. But the family of Jason Corbett, the man they were convicted of killing, says system is unfair.

Crow: What's next for people of faith?

The first ‘What’s Next’ question concerns the activities of Jesus after His resurrection.

Crow: Recounting the life of Jesus on Holy Week

Christians are familiar with the challenges of Holy Week. Before saying, “Christ Has Risen,” we need to be present in his life in Jerusalem.

Passover and Palm Sunday are compelling sacred celebrations that encourage the faithful to include the values of the past to guide the future.…

Jessica Simone, who recovered from the COVID-19 virus, pushes her children, Madylin and Bowen, in a swing in their backyard on April 24, 2020, in Winston-Salem.

Jessica Simone, who recovered from COVID-19 virus, stands for a portrait on April 24, 2020, in Winston-Salem.