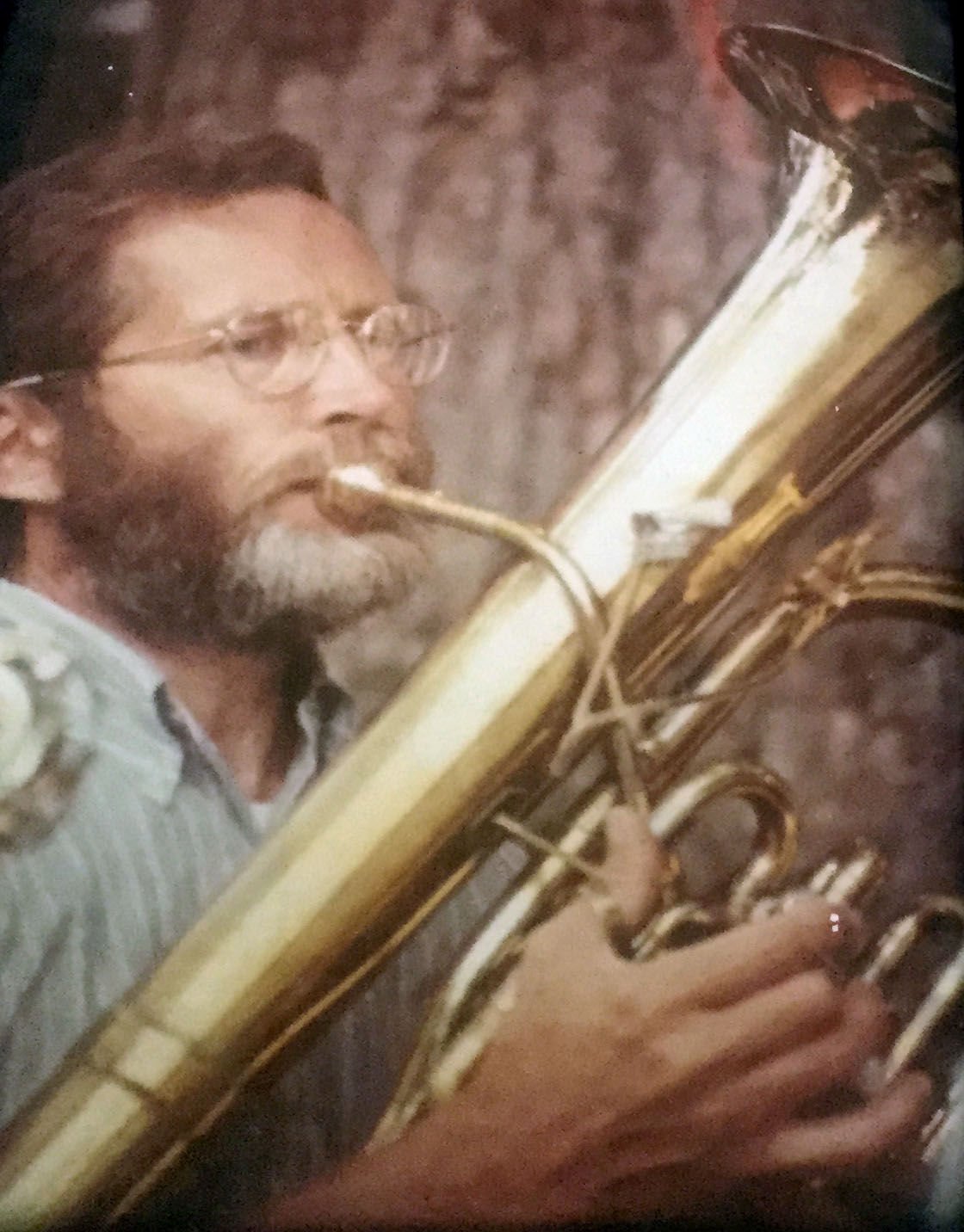 Don Johansson in his younger days with Salem Band. The band is going to DC on Memorial Day to play for WWII vets. (Winston-Salem Journal, Scott Sexton) 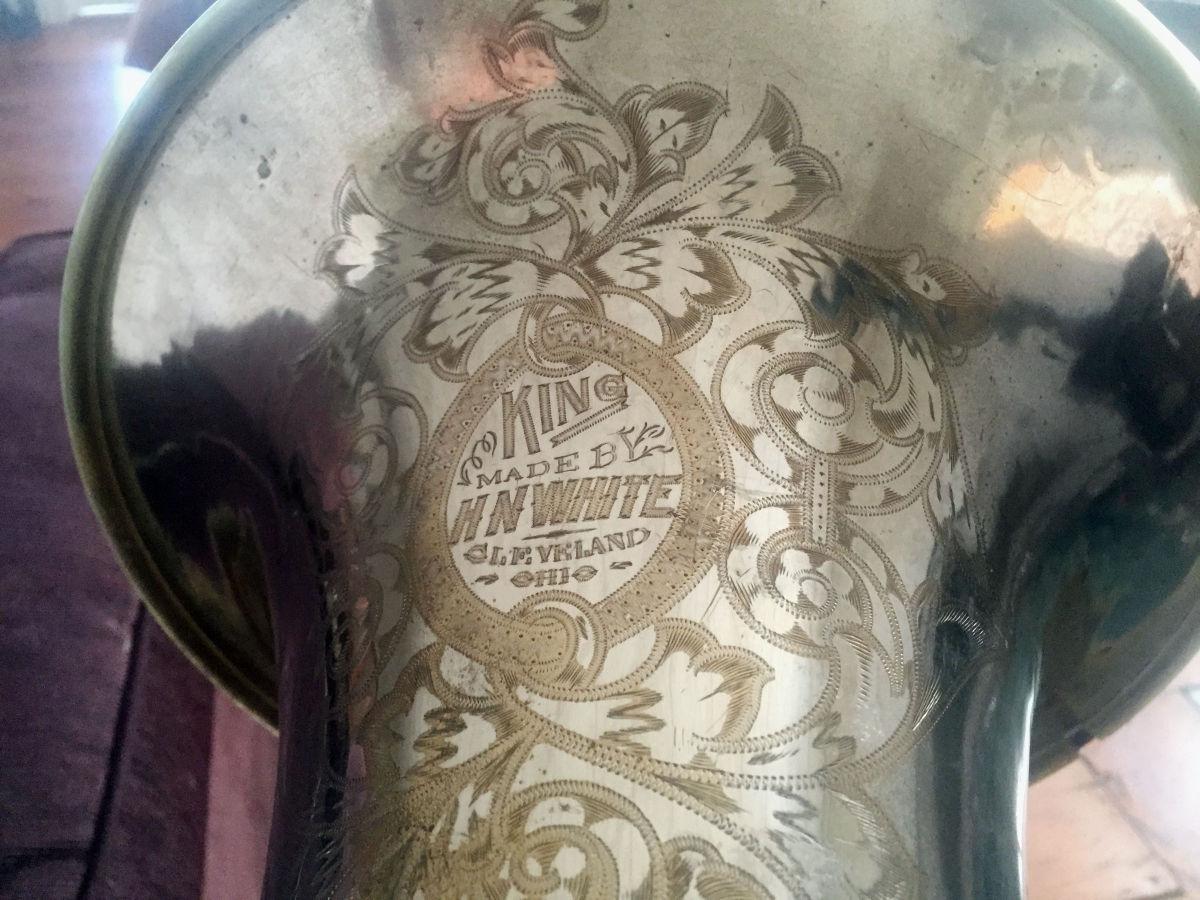 A detail of the engraving on Don Johansson's 1912 horn which he rebuilt from original parts. (Winston-Salem Journal, Scott Sexton) 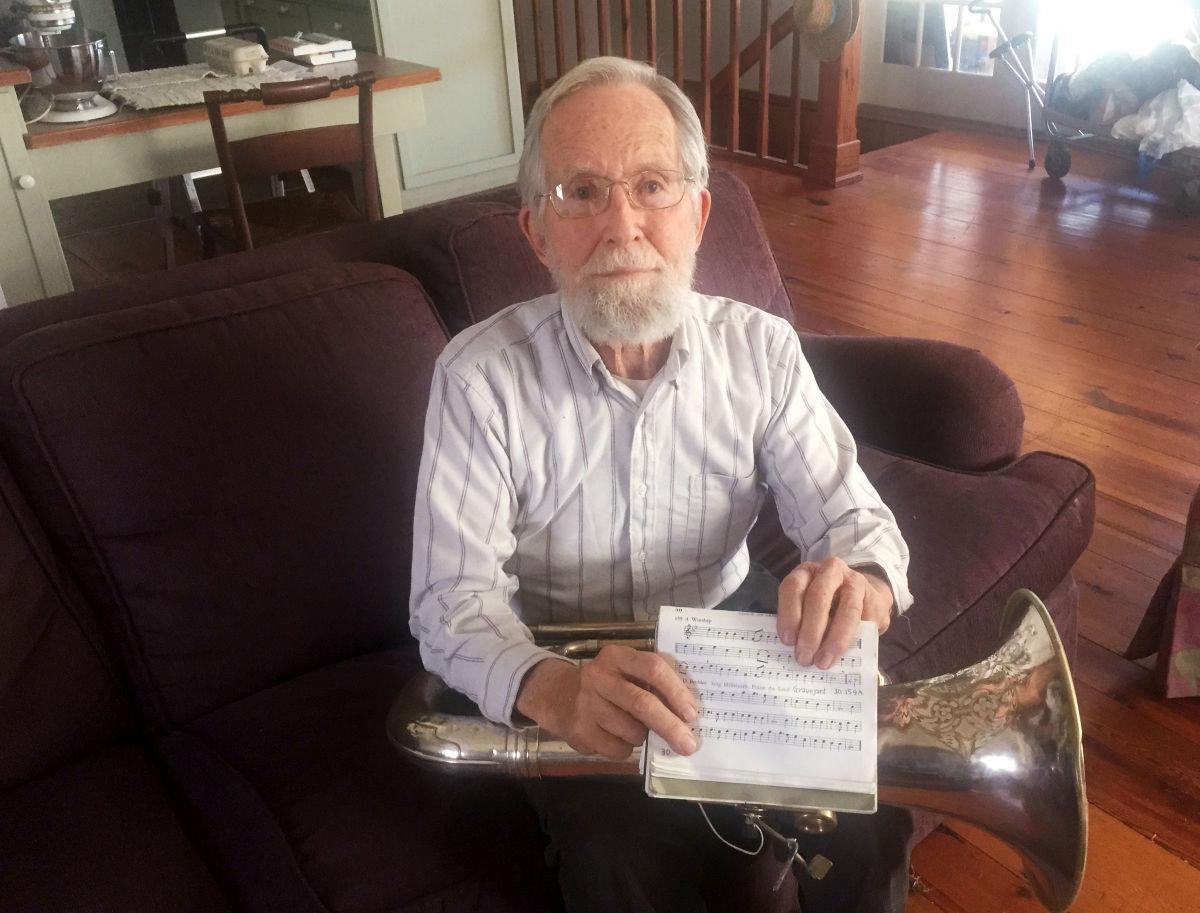 Don Johansson is a member of Salem Band, which is going to DC on Memorial Day to play for WW II vets. He is a WWII veteran.

As one of Salem Band’s longest serving members, Don Johansson is particularly looking forward to the group’s trip to Washington for Memorial Day.

It’s a big deal and a terrific honor. But that’s not the main reason Johansson is eagerly looking forward to the trip. Rather, it’s because he served in the U.S. Navy during World War II and honoring his fellow veterans will be particularly meaningful.

“I’m not sure what the gig is but the last time I was in Washington it was on a Flight of Honor,” he said, referring to trips organized across the country that gave World War II vets the chance to visit their memorial on the National Mall. “I wasn’t so much interested in seeing the memorial as I was hearing those guys talk.

“A lot of times, they won’t talk about (their experience) but because I’m one of them, they will. I figure I’ll get the same chance to hear more of those stories.”

Salem Band — it’s billed as the oldest, continuous mixed wind ensemble in the nation — was established in 1771.

It’s a fun thing, a community band that allows musicians to play together and enjoy one another’s company. In addition to playing concerts throughout the year, Salem Band also includes several smaller bands and ensembles (quartets of tuba and saxophone players) which play more specialized music in smaller settings.

For Memorial Day, though, the spotlight is on the band in its entirety. Salem Band was asked last fall to represent North Carolina in the national concert series. Its 50 or so members will play a 40-minute program at one of the memorials on the mall and take part in a ceremony at the Tomb of the Unknown Soldier in Arlington National Cemetery.

Having Johansson and Jim Oates, also a Navy man, in the band and along for the performance lends the trip extra poignancy, said Eileen Young, the director of the Salem Band.

“We are excited to make this trip and perform for potentially thousands of veterans in the Capitol that weekend, but we are especially excited for those veterans in our group,” Young wrote in an email.

The logistics (and expenses) for the trip will be a challenge, but the band has been in full fundraising mode since getting word last fall that they’d been selected.

The goal all along has been to try and raise the full $18,000 cost to cover the expenses. So far, Young said, Salem Band has raised roughly half of that. The band is planning a “Home Concert” in Salem Square May 19 to play the music it has prepared for Memorial Day.

“This is quite an honor for us, and I just launched a crowdfunding campaign to raise the remainder of what we need to send the entire band,” she wrote.

Johansson joined the Navy toward the end of the war in 1945 when he was just 17.

“Back then, you signed up for the duration, which was determined by Congress,” he said. “What could go wrong there?”

He was still training as a radar operator when nuclear explosions on the Japanese mainland ended the war.

“We were a bunch of happy campers when we got that news,” he said. “Without the A-bomb (taking Japan) would have been terrible. We were told to expect two-thirds casualties if we’d had to fight what was left of the Japanese Navy, the Japanese Army and the civilian population after that.”

After the war, Johansson used his GI Bill benefits to get a degree in engineering and launched into a career that eventually brought him to Winston-Salem to work for Western Electric.

Once he and his family had settled in, he found his way first to the Moravian Church and then to band — an outlet for a lifelong love of music.

These days, he’s playing a 1912 horn he built himself from parts a friend bought in the early ’60s at a junk shop in Virginia. The box the friend — a Moravian minister — bought had enough parts for three horns. They soaked and cleaned all the parts, and at the end of a day, they indeed had three horns.

“He’d told me that if we got them together, he’d let me have one for a third of the money he’d spent,” Johansson said. “So I asked him how much. He smiled and said $15. For $5 I got an antique. No telling how much it’s worth today.”

Indeed. And when he plays it for his fellow veterans this Memorial Day, it’ll be priceless.

Donations can be made at tinyurl.com/neb65rx or by visiting salemband.org

Teachers, other employees would see more money under recommendation for Winston-Salem/Forsyth Schools. No mention of executive pay bump.

The finance committee of the Winston-Salem/Forsyth County Schools Board of Education voted Monday to support giving teachers, certified suppor…

Mary Bailey Thomas, a photographer who sparked creativity in students in Winston-Salem and Davidson County for more than 40 years, died Sept. …

Don Johansson in his younger days with Salem Band. The band is going to DC on Memorial Day to play for WWII vets. (Winston-Salem Journal, Scott Sexton)

A detail of the engraving on Don Johansson's 1912 horn which he rebuilt from original parts. (Winston-Salem Journal, Scott Sexton)

Don Johansson is a member of Salem Band, which is going to DC on Memorial Day to play for WW II vets. He is a WWII veteran.