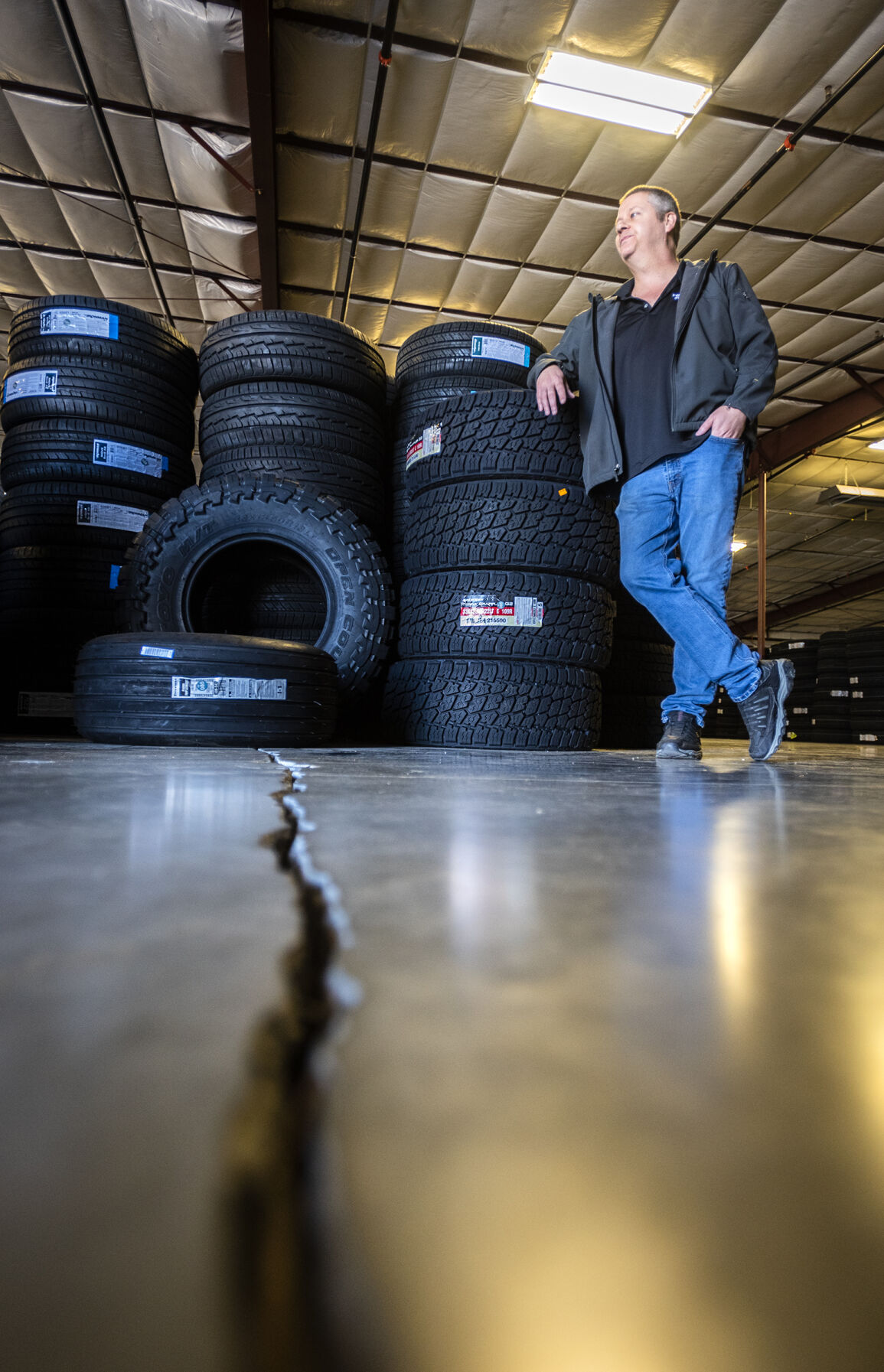 Adam Woddel, owner of City Limit Tire, stands in his warehouse in Sparta. The crack in the foreground of the photo is a result of a magnitude 5.1 earthquake in early August. 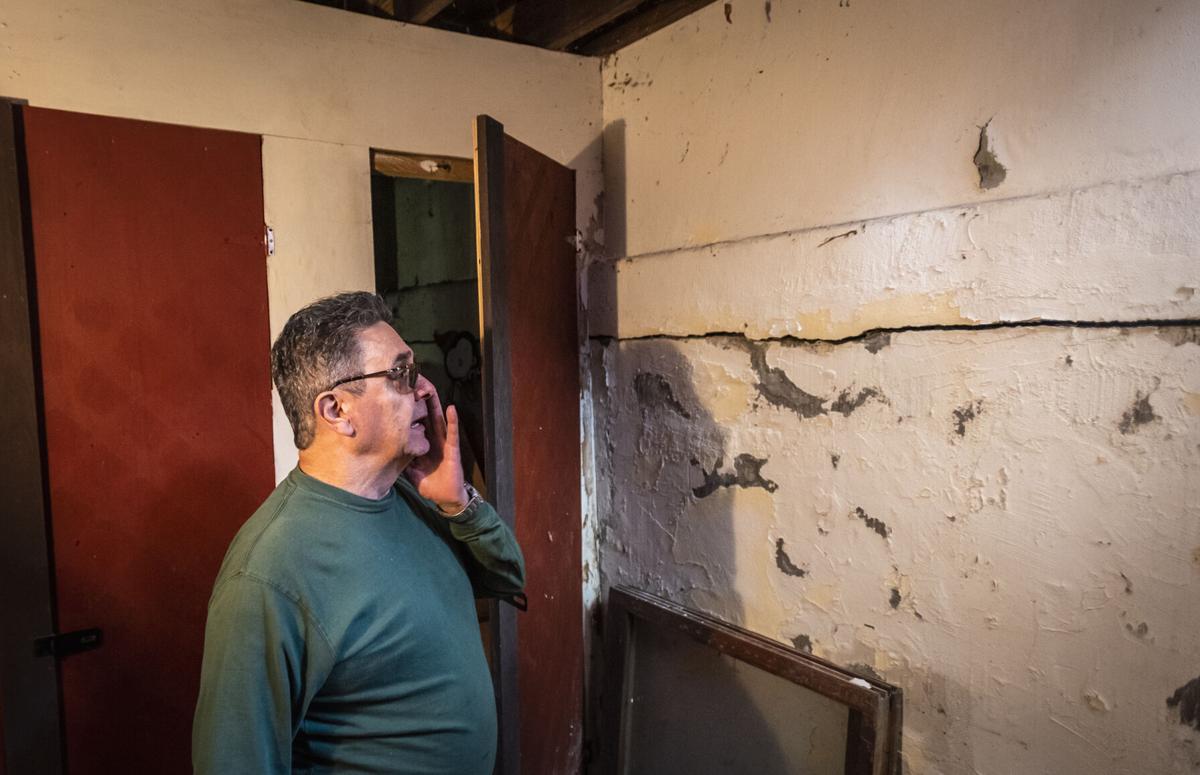 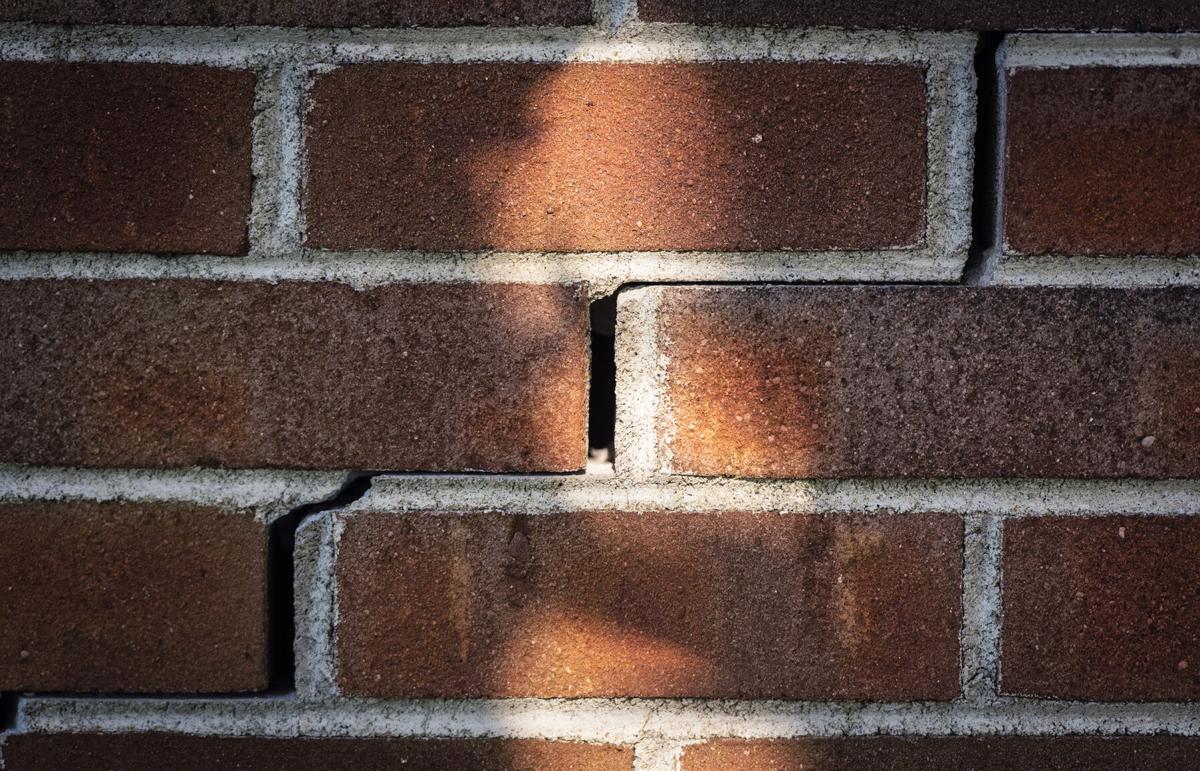 Dappled sunlight highlights damage to a home over two months after a magnitude 5.1 earthquake. 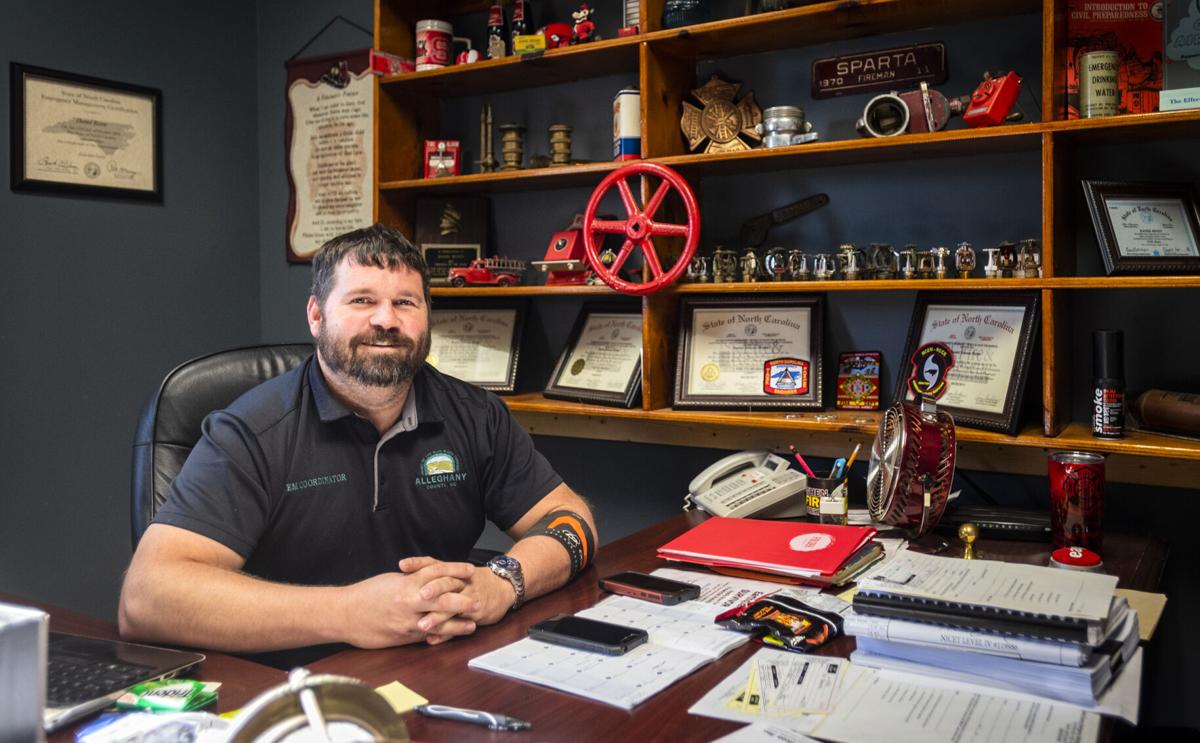 Alleghany County Emergency Management Coordinator Daniel Roten sits for a portrait in his office on Thursday, Oct. 14 in Sparta. It has been just over two months since Alleghany County was struck by a magnitude 5.1 earthquake. 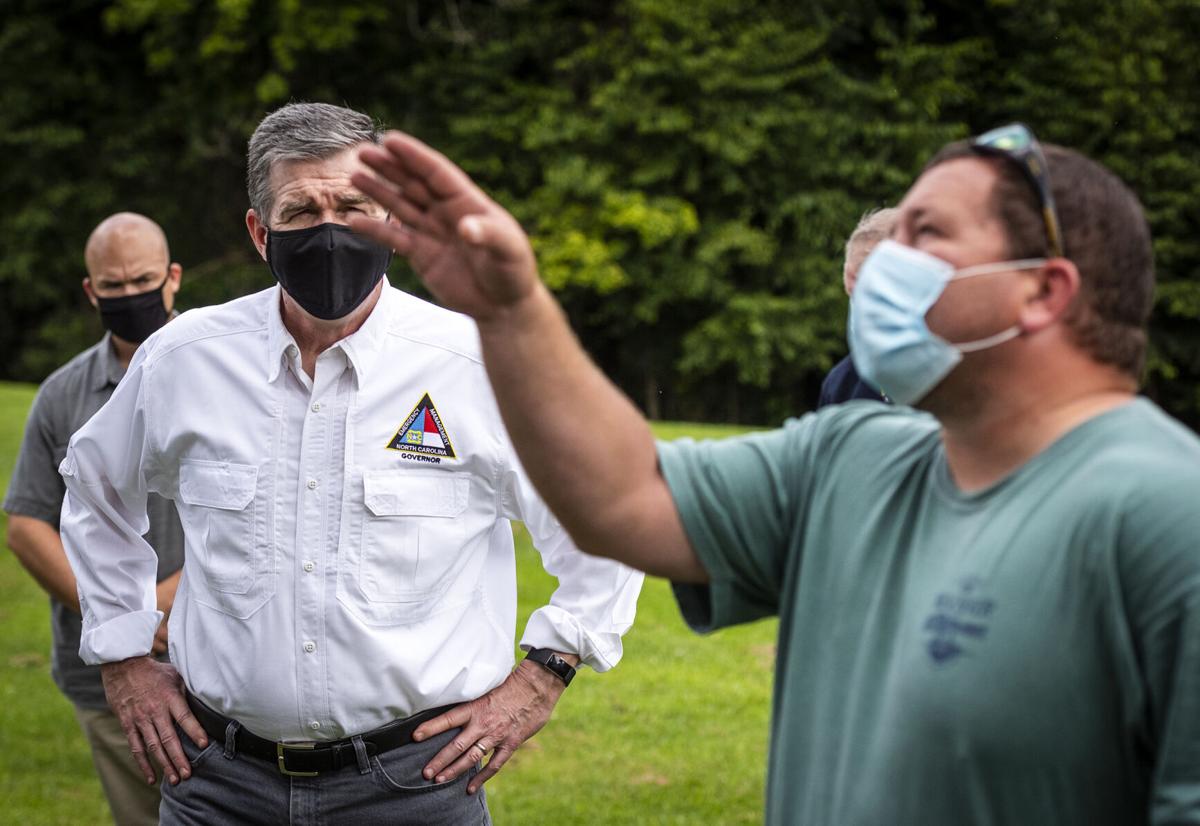 Mike Parlier describes damage to his home to Gov. Roy Cooper during an Aug. 11 tour following the 5.1 magnitude earthquake in Sparta. Cooper and his emergency management director, Michael Sprayberry, toured areas affected by the Aug. 9 earthquake in a bid to best deploy state and federal resources to assist displaced residents.

That’s not at all unusual. Roten serves as the emergency management coordinator in Alleghany County, and so his phone has been ringing nearly nonstop since an earthquake the morning of Aug. 9 shook locals to their core and caused millions in damages.

“That’s the state,” he said after looking at the number. “I’ll call them back.”

Roten decided to let the call roll to voicemail because the task at hand seemed a little more urgent.

He had a chance to update North Carolinians beyond the 11,000 souls in his county about what had been lost, how much work remains and urge continued patience with a rebuilding process that’s taking longer than many might like.

“We’re getting there,” he said. “It’s a slow process. We’re trying to make sure we do it correctly. I try to tell people that the bigger the government wheel is, the slower it turns.

“This is a huge undertaking.”

The scars left behind by an earthquake, which measured an eye-opening 5.1 magnitude, are everywhere. But you have to look for them.

“It wasn’t like a hurricane or a tornado where you can just drive down the street and see that everything is flattened,” Roten said.

Nor did the quake resemble anything like the 6.9 magnitude monster in 1989 near San Francisco that killed 63, caused $6 billion in damage and halted a World Series.

The damage left in Alleghany County is more insidious, and in many ways, more difficult to fix. Worse still, next to no one carried an earthquake rider on their insurance. "I can count the number on one hand," Roten said.

Some 500 buildings were damaged; 60 suffered “major” damage, a term used by government agencies that means it equals 40 percent of a structure’s value.

The estimated total so far: $15 million and counting.

“That may not sound like a lot, but it’s very impactful here,” Roten said. “If this happened in the Triangle or Winston-Salem, (damage) would have been astronomical.”

On a micro-level, in the eyes and wallets of small business and individual homeowners, the August earthquake was catastrophic.

Nordelo was pointing to cracks to a slab of sidewalk that runs the length of his building, which sits just above the Little River. His roof was bowed, too, in a wavy pattern caused by a tremor that lasted mere seconds.

Cracks resembling stairsteps appeared in the walls of his basement storage area and water pipes burst, forcing him to close for two days. He’s done a lot of the repair work with his own hands, including caulking and attempting to seal the sidewalk breaks with concrete he mixed himself.

Two days after the quake, Gov. Roy Cooper, a coterie of aides, state troopers and an attendant media horde from as far away as Charlotte toured the town and surveyed the damage.

Cooper stood in Nordelo’s restaurant, asking smart questions and talking up disaster aid that would surely flow to the county and surrounding areas. “He promised us,” Nordeo said.

That assistance, though, has been hard to come by for an immigrant living the American dream. A letter denying his application for a low-interest loan administered by the U.S. Small Business Administration arrived Wednesday. “They said we didn’t have enough (income),” Nordelo said.

Still, he’s persevering, planning and counting his blessings. His daughter is an honors student at Appalachian State University, and his family is strong-willed enough to repair what they can when they can.

“I’ll fix it little by little,” he said. “This is home. We’re working. Not a lot of money (coming in) but we made a life here.”

'People were on edge anyway'

Over in the emergency services office in the county building, Roten knows what Nordelo is experiencing. He’s heard similar stories from other small business owners along with nearly opposite accounts from homeowners who’ve had good experiences in applying for aid.

The issue here is that the earthquake, while locally devastating, didn’t rise to the level of a federal disaster. “It wasn’t big enough for FEMA” is the way Roten explains it.

So in this case, Cooper declared a state-level disaster, which set in motion freeing up already budgeted state emergency aid and activating the federal Small Business Administration to oversee the loan process for businesses and homeowners.

As of Thursday, the SBA had received 69 loan applications and approved 28 for $734,100 for businesses and residents in Alleghany and nearby counties, wrote Janel Finley, an SBA public-affairs specialist in an e-mail. The deadline for loan applications is Oct. 26.

Additionally, the N.C. General Assembly approved in September another $24 million in relief. “We didn’t expect that and we had to quickly design a program to get that out through the state budget and management office,” said Keith Acree, a spokesman for the state emergency management division.

On a practical level, that means disaster-relief grants of up to $68,000 will be available to qualified applicants.

That’s helpful. So, too, is a decision from Raleigh to hire two workers — including a general contractor to speed damage assessments — to be based in Sparta to handle applications.

“It’s possible people will be able to get those grants and use them to repay SBA loans,” Acree said.

Still, hearing from locals frustrated by the difficulties faced by some small business owners is hard since many of them are friends and neighbors.

“I don’t want to bite the hand that’s helping us and I get that (government) can’t be deciding who wins and who loses in private business,” Roten said. “I can tell homeowners to be patient, that help is on the way. But small business owners, I can’t say ‘Help might be on the way. But we just don’t know.’ You can’t tell people that.

“It has been slow, but the state has been really good overall and very helpful.”

Some locals are reacting with a stereotypical sense of mountain independence and not counting on outside help.

As soon as Adam Woodel realized the extent of the damage to his business — geologists told him City Limit Tire sits atop the fault line — he got busy.

But that’s not an option for a business with four employees that sells tires online and ships directly to customers.

Instead, Woodel hired a contractor to repair the drop ceiling in the business office, another to rehang bay doors that were damaged, a plumber to install new toilets and check water lines and found a fourth to seal cracks in the concrete slab floor of his huge metal pre-fab warehouse.

He’s out a few thousand bucks and expects the final tally to run past $10,000 for piecemeal repairs. “Other people got it worse,” he said.

Another worry was a series of seven small quakes throughout the day Tuesday that roiled the area.

Locals immediately recalled “pre-shocks” from a similarly sized tremor the day before the bigger one. “People were on edge anyway,” Roten said.

Woodel was one of those. Until he recalled a casual conversation he’d had with a scientist digging a hole behind his warehouse to study the earthquake.

“I was worried that it could happen again,” he said. “But the geologist said the pressure (underground) has been relieved so it’s very unlikely to happen again in my lifetime.”

Residents of a small county resting uneasily along fault lines in the Blue Ridge Mountains certainly hope so.

What the Colonial Pipeline Hack Means for Fuel Supplies

Adam Woddel, owner of City Limit Tire, stands in his warehouse in Sparta. The crack in the foreground of the photo is a result of a magnitude 5.1 earthquake in early August.

Dappled sunlight highlights damage to a home over two months after a magnitude 5.1 earthquake.

Alleghany County Emergency Management Coordinator Daniel Roten sits for a portrait in his office on Thursday, Oct. 14 in Sparta. It has been just over two months since Alleghany County was struck by a magnitude 5.1 earthquake.

Mike Parlier describes damage to his home to Gov. Roy Cooper during an Aug. 11 tour following the 5.1 magnitude earthquake in Sparta. Cooper and his emergency management director, Michael Sprayberry, toured areas affected by the Aug. 9 earthquake in a bid to best deploy state and federal resources to assist displaced residents.