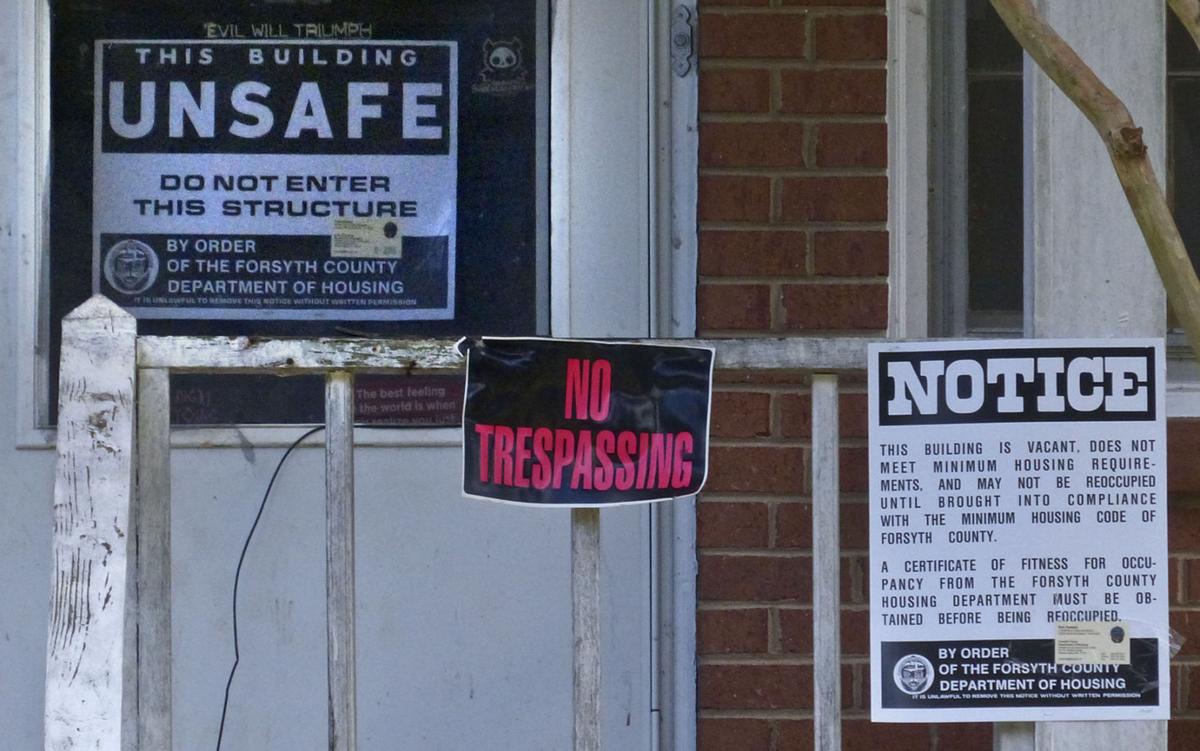 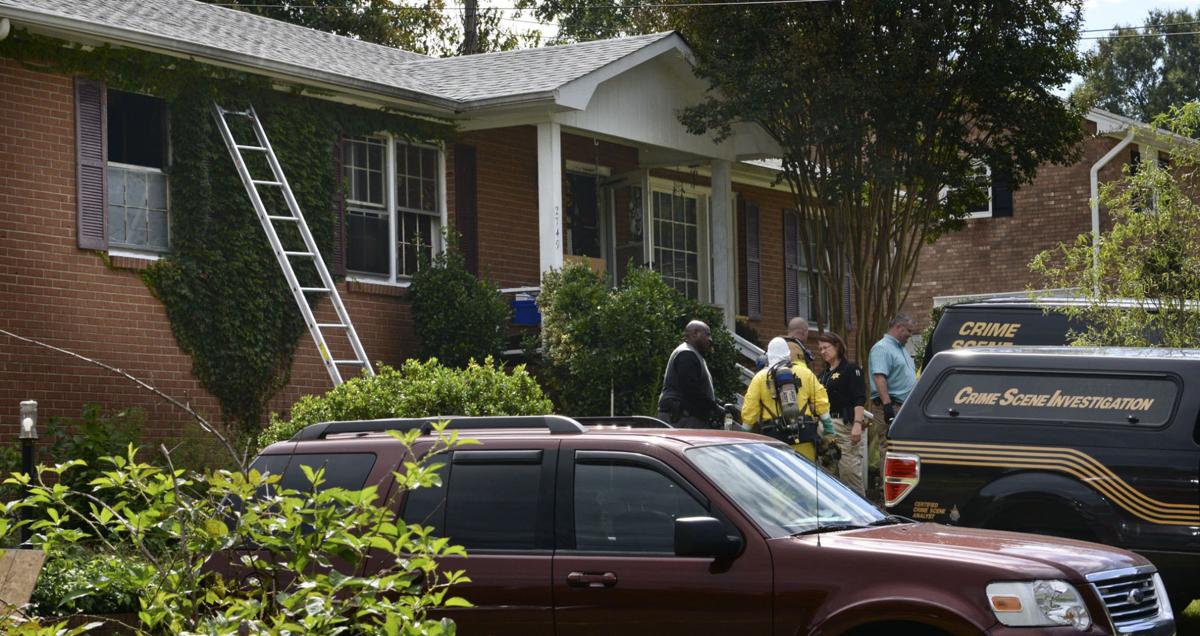 Investigators from the SBI, Forsyth County Sheriff's Office, and Clemmons firefighters continued searching for evidence at 2749 Knob Hill Drive where a pair of human skeletons were found buried in shallow graves.

The house in Clemmons where skeletal remains were discovered in the backyard is filled with debris and mold and has animal feces throughout it, according to a county housing official.

A county sign on the front door now says in bold letters that the building is unsafe and warns people not to enter. Another sign on the property says it does not meet minimum housing requirements and may not be reoccupied until it is brought into compliance with the county’s minimum housing code.

The front door already bore items such as a picture of a skull and cross bones and the words, “Evil will triumph.”

A notice obscures some of the items, such as a phrase written in another language.

According to Darlene May, professor of Arabic language at Wake Forest University, the phrase is Arabic script, but it cannot be translated exactly. The first word is house, and the second word appears to be an attempt to write something to do with devils.

May said her sense is that the person who wrote this did not have Arabic as his or her first language.

“The writings are more akin to faulty attempts by a student,” she wrote.

There is also a phrase written in black in the drained pool in the backyard. The words are written with some but not all of the vowel marks, May said, so it could be either “He praised Iblis” or “Praise Iblis.” Iblis is an Arabic name for Satan or the devil.

Pazuzu Algarad and Amber Burch, who lived at the house, were arrested Sunday on charges of murder and accessory after the fact of murder after officials discovered skeletal remains of two unidentified people in shallow graves in the backyard. The bodies were buried there in 2009, according to arrest warrants.

Algarad’s birth name was John Alexander Lawson, but he changed his name in 2002 for religious reasons.

Pazuzu is the name of an Assyrian demon whose name was used in the movie, “The Exorcist.”

According to a secured bond findings form from another case, law enforcement officers had said Algarad had performed satanic rituals and animal sacrifices at 2749 Knob Hill Drive on a regular basis.

Kornelis said the signs were posted after a county code enforcement officer inspected the house on Tuesday.

He said garbage and debris were scattered throughout the house, and that the house was also filled with mold.

Those dogs were picked up by animal control officers. Animal Control Director Tim Jennings said they took eight dogs: five Labrador retriever mixes, two pitbulls and a border collie mix. He said the dogs did not require major medical attention. Jennings said the owners have until the end of the day Friday to indicate if they are interested in getting the dogs back.

Algarad’s mother, Cynthia Lawson, also lived at the house. Jennings said all three residents had ties to the dogs.

Kornelis said the sheriff’s office asked the department to look at the house based on safety concerns.

Sheriff’s office personnel have been wearing full protective suits and masks while processing each room for evidence.

“If we have to go in with breathing apparatus and other things, we felt that the conditions called for someone with that expertise to evaluate the scene,” Stanley said.

Kornelis said that in other situations where a house is not as bad, the county would have a hearing before declaring it unfit.

“The situation was bad enough to call it unsafe right away,” Kornelis said.

Kornelis said interested parties such as homeowners will be notified and a hearing will be scheduled within the month. At the hearing, county staff will go over what is wrong and what would need to be remedied before someone could live in it again.

If the owners do not fix it, the county could decide to go through the process of having the house condemned and torn down.

The house is owned by Lawson and her ex-husband, Johnny Larry James.

Officers arrested a third person on Monday, Krystal Nicole Matlock, and she was holding back tears when she appeared in District Court via video on Wednesday morning.

Matlock was charged with accessory after the fact of first-degree murder. She is accused of helping bury one of the bodies.

In her first appearance, Matlock told Forsyth District Judge Lisa Menefee that she intends to retain an attorney. She said she works two jobs.

Algarad and Burch had first appearances on Monday, and they said they wanted court-appointed attorneys to represent them.

All three are scheduled to appear in court Oct. 23.

Stanley said officials have not yet positively identified the skeletal remains of the two people. It could be next week or later until there is a positive ID, he said.

Stanley said investigators have “some ideas and possibilities” and are reaching out to some of those families to ask for relevant information for medical records.

“Based on information that we’ve received, (we’re) looking at potential victims and trying to determine if there is some type of medical-related information that could be used by the medical examiner’s office to positively identify or disprove that this is the person they’re comparing to,” Stanley said.

Investigators continued searching the house on Wednesday for potential evidence.

Stanley said investigators would still be on the scene Thursday.

Algarad has history of mental illness

YADKINVILLE — In October 2010, a team of state psychiatrists interviewed Pazuzu Algarad, who at the time faced an accessory charge in the deat…

Warrants: Human remains found in Clemmons yard were buried in 2009

The third person charged after human remains were found in a Clemmons yard made her first court appearance Wednesday morning.

CLEMMONS – On the front door of a house where the skeletal remains of two people were found Sunday was a sign warning law-enforcement not to enter.

Neighbors shocked by discovery of skeletal remains in Clemmons

CLEMMONS — Residents of the 2700 block of Knob Hill Drive said Monday that their neighborhood normally is quiet.

Families share memories of two men who disappeared 5 years ago

The video from inside Pazuzu Algarad’s home has provided some long-awaited answers. However, it has also raised some questions.

Investigators from the SBI, Forsyth County Sheriff's Office, and Clemmons firefighters continued searching for evidence at 2749 Knob Hill Drive where a pair of human skeletons were found buried in shallow graves.