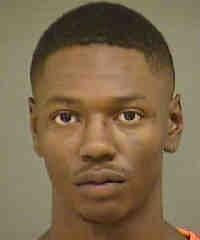 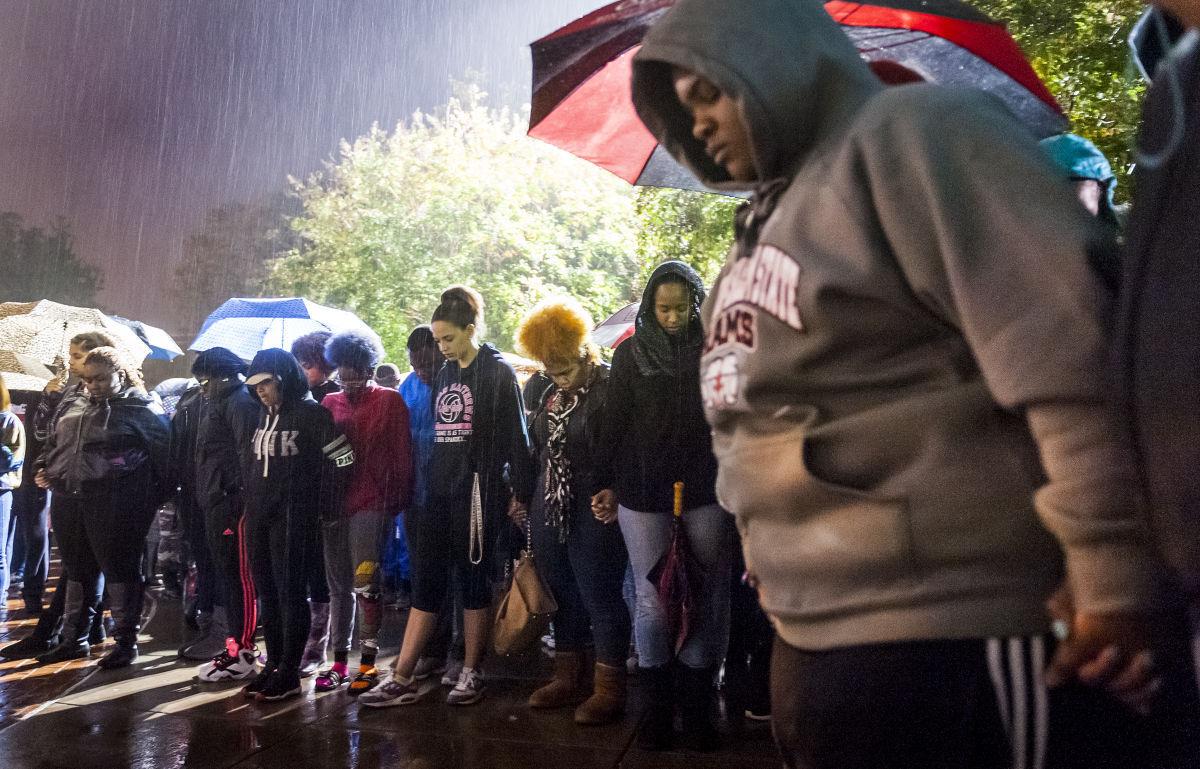 People hold hands during a prayer at a memorial service for Anthony White Jr. on Nov. 1, 2015. White was fatally shot on the campus of Winston-Salem State University early Sunday. 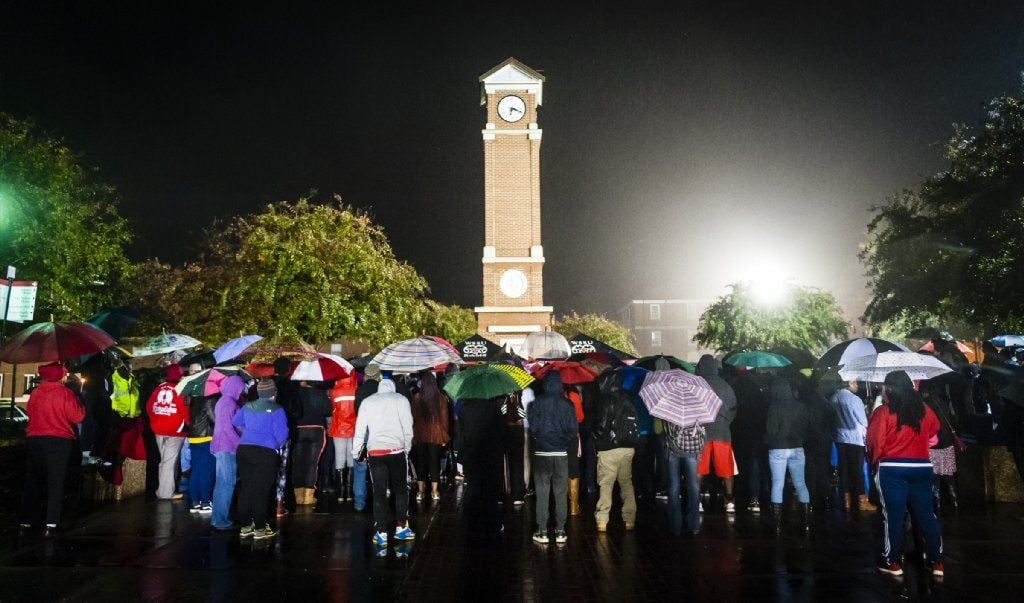 Xavier Martin said she finds it hard to breathe ever since she found out her 19-year-old son, Anthony White, was shot to death during homecoming weekend in 2015 at Winston-Salem State University, where he was a student.

“I loved him before he was born,” she said. “I loved him in my tummy. I have his ultrasound pictures. I did everything in my power to ensure he was healthy. This was the first love of my life.”

If Anthony White were still alive, she said, he would be a junior at WSSU.

On Monday afternoon, Jarrett Jerome Moore, 22, of Charlotte, who described White as his friend, pleaded guilty to second-degree murder and discharging a firearm on educational property. Moore was originally charged with first-degree murder.

Judge John O. Craig of Forsyth Superior Court consolidated the charges into one count and sentenced Moore to a mininum of 23 years and a maximum of 28 years and eight months in prison.

Winston-Salem Police detective Michael Ognosky testified that Moore, a former WSSU student, and White had tried to get into Wilson Hall on campus but were not allowed because they didn’t have student identification. Another student, Troy Bowden, was inside Wilson Hall, and Moore and White were outside waiting for him to come out.

According to Jason Crump, Moore’s attorney, the three were planning to attend a concert at the now-closed Ziggy’s nightclub on Martin Luther King Jr. Drive. Bowden was driving. Crump said Bowden had stopped at Wilson Hall to visit his girlfriend but was taking much longer than White and Moore expected. It began to rain and Bowden’s car was locked.

Ognosky said several witnesses saw a man matching Moore’s description pull out a handgun and then they heard a gunshot. Moore initially told authorities that White had given him the gun and told Moore to “handle it,” according to a search warrant. Ognosky said investigators never found any evidence that White had given Moore a gun. In fact, investigators determined that the gun was stolen, and Moore eventually admitted that he bought the gun in Charlotte and had it on him when he came to WSSU, Ognosky said.

Moore later told police that he pulled out his gun and tried to hit Bowden with it but that the gun went off. The bullet struck White in the head, and White died at the scene. Police found him in the parking lot between Wilson Hall and Gleason-Hairston Terrace. The shooting led to the campus being on lockdown for more than three hours.

Bowden would not cooperate with the investigation, Ognosky said. Assistant District Attorney Jennifer Martin said the lack of cooperation from some witnesses was part of the reason for the plea agreement Monday.

Moore ran away and was later arrested a day later on unrelated charges. Ognosky testified that Moore immediately knew that he was being questioned about the shooting at WSSU because WSSU officials had sent out a news release naming Moore as a suspect.

They both made good grades, but Moore struggled with depression during certain parts of his life, according to Crump. He received an academic and athletic scholarship to Gardner-Webb University, but he transferred to Winston-Salem State. He left after the 2014-15 academic year.

In October 2014, he was charged with misdemeanor assault on a government official, felony possession with intent to sell and deliver marijuana, and maintaining a vehicle to keep a controlled substance, according to arrest warrants.

A WSSU campus police officer accused Moore of possessing 1½ ounces of marijuana and keeping it in a 2003 Acura, a warrant said. While Moore was being held in the Forsyth County jail on those charges, he was accused of assaulting a sheriff’s deputy by striking him on the right side of his face, knocking off his glasses, another warrant said.

On Nov. 7, 2014, Moore pleaded guilty to those charges, a court record shows. Moore was put on probation for 30 months, ordered to serve 75 days in jail, fined $100, ordered to pay $310 in court costs, and ordered to be enrolled in school and to eventually land a job.

Crump said Moore had a reputation for trying to help people, including volunteering and tutoring students. Moore never intended to hurt White, whom he considered like a younger brother, he said.

Martin said this tragedy hurts especially because White’s mother had tried as hard as she could to make sure her son made it to college.

“That this young man was struck down on a campus where his future was just beginning is devastating,” she said.

White’s grandfather, Robert Martin, could barely get through his statement without breaking down.

“I can’t even look at his pictures,” he said. “I can’t go to his gravesite because I don’t want to believe my grandson is gone.”

White, who played football at Belton-Honea Path High School in Honea Path, South Carolina, chose to focus on academics and not sports when he got to WSSU, where he majored in information technology. He also had plans to get a commercial driver’s license so he could drive trucks, his family said.

Ullania Bonds II, White’s younger brother, said he can’t wrap his head around the fact that White is dead. White, he said, mentored him his whole life. His future children, Bonds said, won’t have an uncle they can talk to.

“It ain’t right,” he said about Moore. “You can’t kill somebody you say is your brother, I don’t care how big and bad you are.”

A Winston-Salem man faces multiple charges after he caused a two-vehicle crash Wednesday as police pursued him, according to a police accident…

Forsyth County sheriff's deputies look for suspect who eluded them in a vehicle chase, authorities say

Forsyth County sheriff's deputies are looking tonight for a suspect who eluded them in a vehicle chase on U.S. 52, authorities said.

Winston-Salem police have arrested a man on rape and other charges in two related incidents, authorities said.

Federal judges in Greensboro have sentenced two Winston-Salem men to prison after they were convicted of gun-related offenses, authorities said.

People hold hands during a prayer at a memorial service for Anthony White Jr. on Nov. 1, 2015. White was fatally shot on the campus of Winston-Salem State University early Sunday. 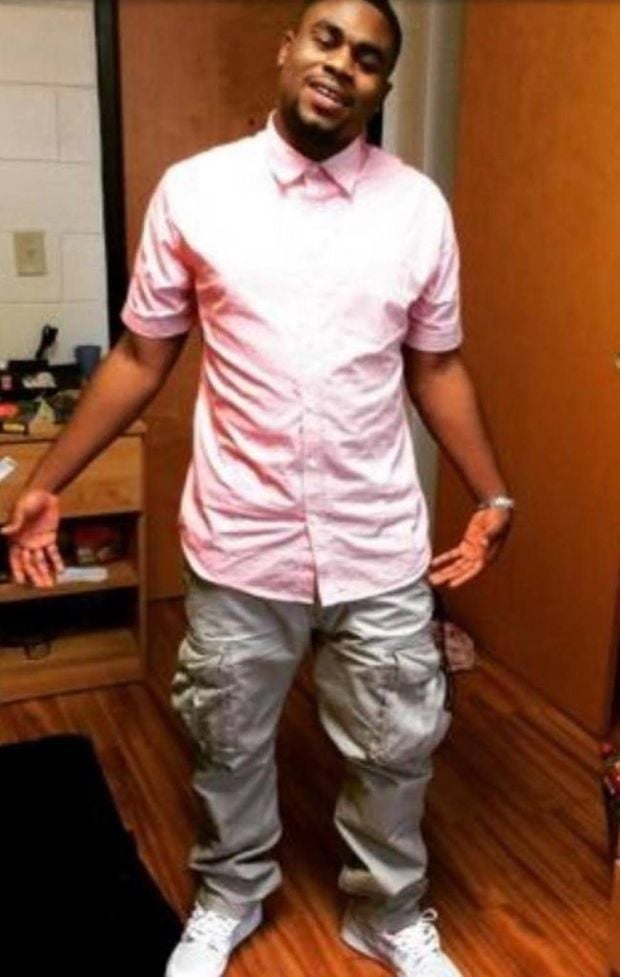