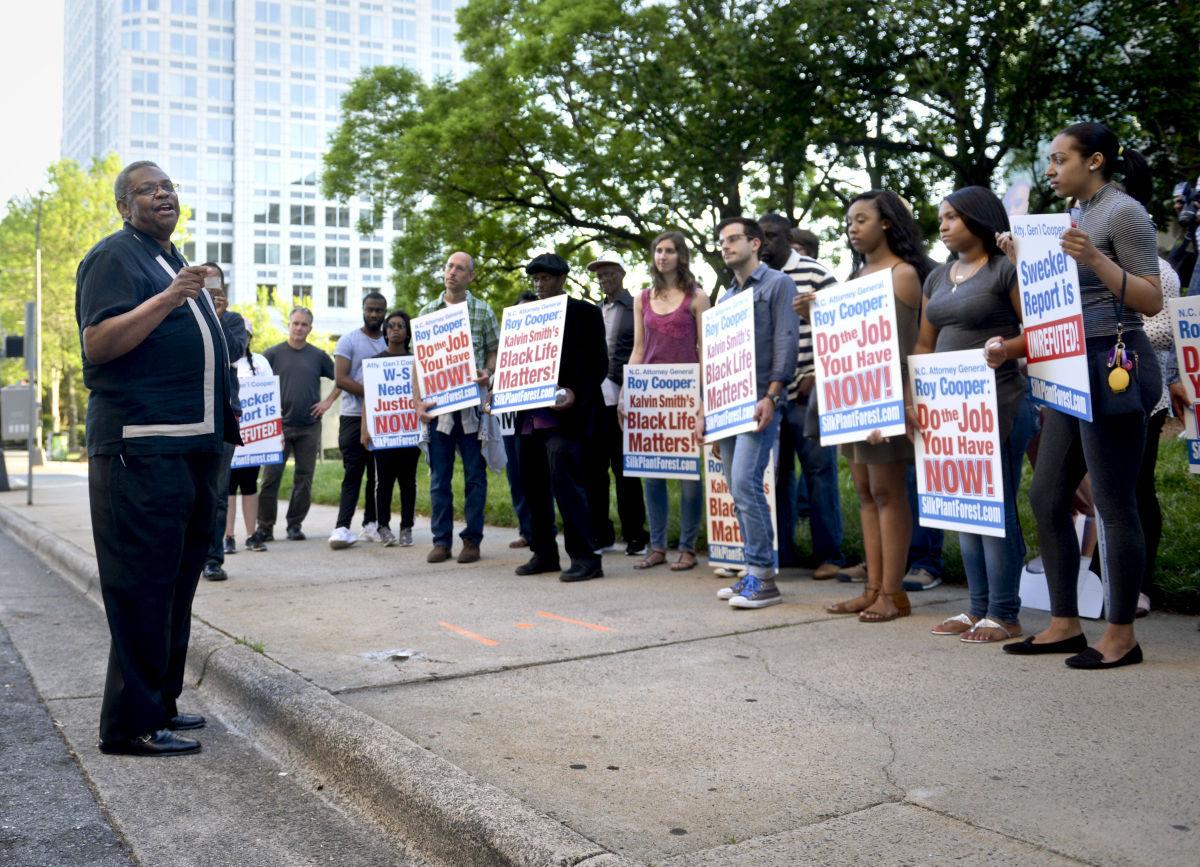 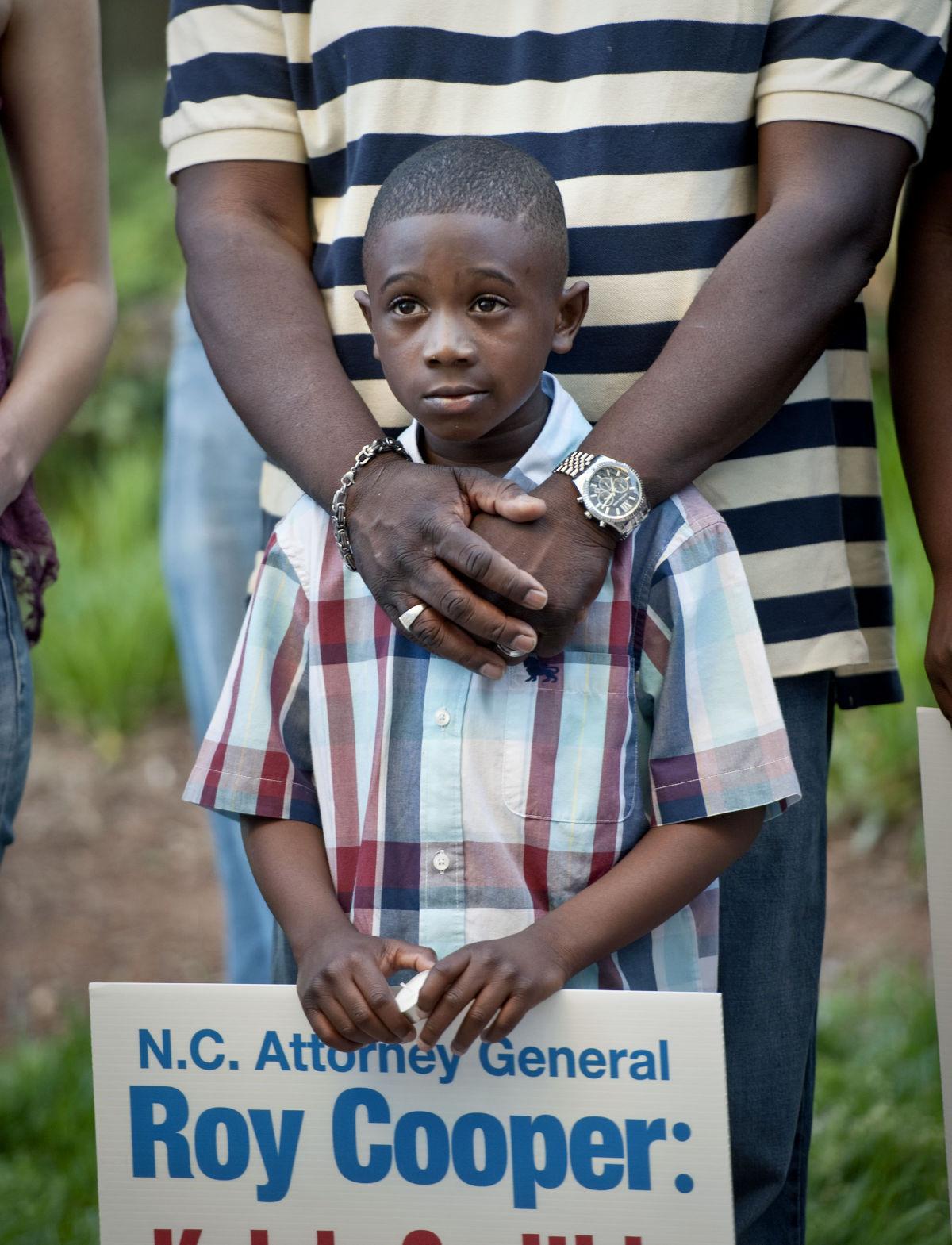 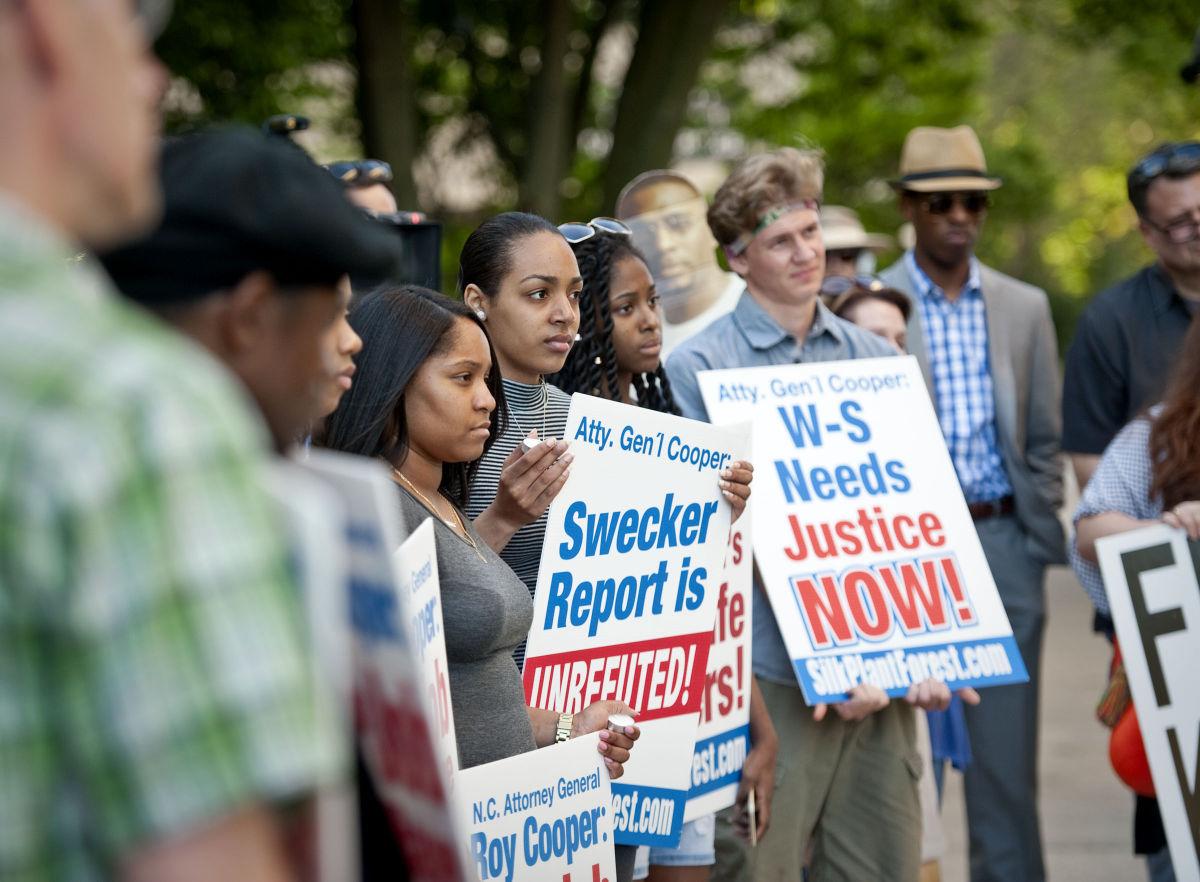 More than 30 people marched in downtown Winston-Salem to the Forsyth County Hall of Justice on Sunday to demand justice for two men, including Kalvin Michael Smith, who they believe were wrongfully convicted.

The other man is Dontae Sharpe, a Greenville man sentenced to life in prison after he was convicted of killing a man during a drug deal.

Smith, 44, has spent nearly 19 years in prison after a Forsyth County jury convicted him of assaulting Jill Marker, an assistant manager at the now-closed Silk Plant Forest store on Silas Creek Parkway. The attack, on Dec. 9, 1995, left Marker with severe brain injuries. She was pregnant at the time and delivered a son while in a coma. She currently lives in Ohio under 24-hour care.

Many of the protesters Sunday were students from Wake Forest University, Winston-Salem State University and Salem College. A crew from Manhouse Productions shot footage of the march for a documentary on the Smith case that will air on MTV News.

Smith’s case is the most prominent allegation of wrongful conviction in Forsyth County since Darryl Hunt was exonerated in 2004 in the murder of Deborah Sykes, a copy editor at Winston-Salem’s former afternoon newspaper, The Sentinel. Last month, Hunt, 51, died of an apparently self-inflicted gunshot wound. After marching to the courthouse, the group held a vigil to remember Hunt.

Smith has maintained his innocence and has unsuccessfully sought to get his conviction overturned in state and federal courts. He now has an appeal pending at the N.C. Supreme Court.

Stephen Boyd, a Wake Forest professor and a member of the Silk Plant Forest Truth Committee, said that Hunt, Sharpe and Smith were all offered plea deals that would have garnered them less time in prison. They refused to plead guilty, Boyd said, to something they didn’t do.

“That’s integrity,” he said as they all stood outside the Forsyth County Hall of Justice.

Students from the three universities as well as the N.C. NAACP and the Silk Plant Forest Truth Committee have been demanding that N.C. Attorney General Roy Cooper join Smith’s defense attorneys in a joint motion vacating Smith’s 1997 conviction. Students went to Raleigh last month to Cooper’s office to deliver a letter and a banner with more than 200 signatures.

Since 2008, Cooper’s office has handled Smith’s post-conviction appeals after Forsyth County prosecutors declared a conflict just before a hearing in Forsyth Superior Court on Smith’s appeal.

Before the march, people gathered at Merschel Plaza on Fourth Street near Trade Street. Many held signs saying, “Free Kalvin Smith.” Other signs implored Cooper, a Democrat who is running for governor against incumbent Republican Pat McCrory, to do his job.

Hayden Abene, a Wake Forest senior, applauded Cooper for speaking out against House Bill 2, which was passed last month and is considered by critics to be discriminatory against gay, lesbian, bisexual and transgender people. Abene said while that was courageous, Cooper has been silent about the Smith case.

“It is not courageous at all to keep defending a wrongful conviction,” he said.

Noelle Talley, spokeswoman for the N.C. Attorney General’s Office, said in a statement last month that Cooper’s office wants to work with the community on “systemic issues in the criminal justice system.”

In court papers, state prosecutors have defended Smith’s conviction and have argued that there is no compelling reason to overturn his conviction or have a new trial.

Augustus Dark, Smith’s father, urged the students to keep up the fight to free his son, Sharpe and others who are wrongfully convicted.

“It’s about justice,” he said. “We have to have justice for all of the Kalvin Michael Smiths.”

Israel: Who is Naftali Bennett?