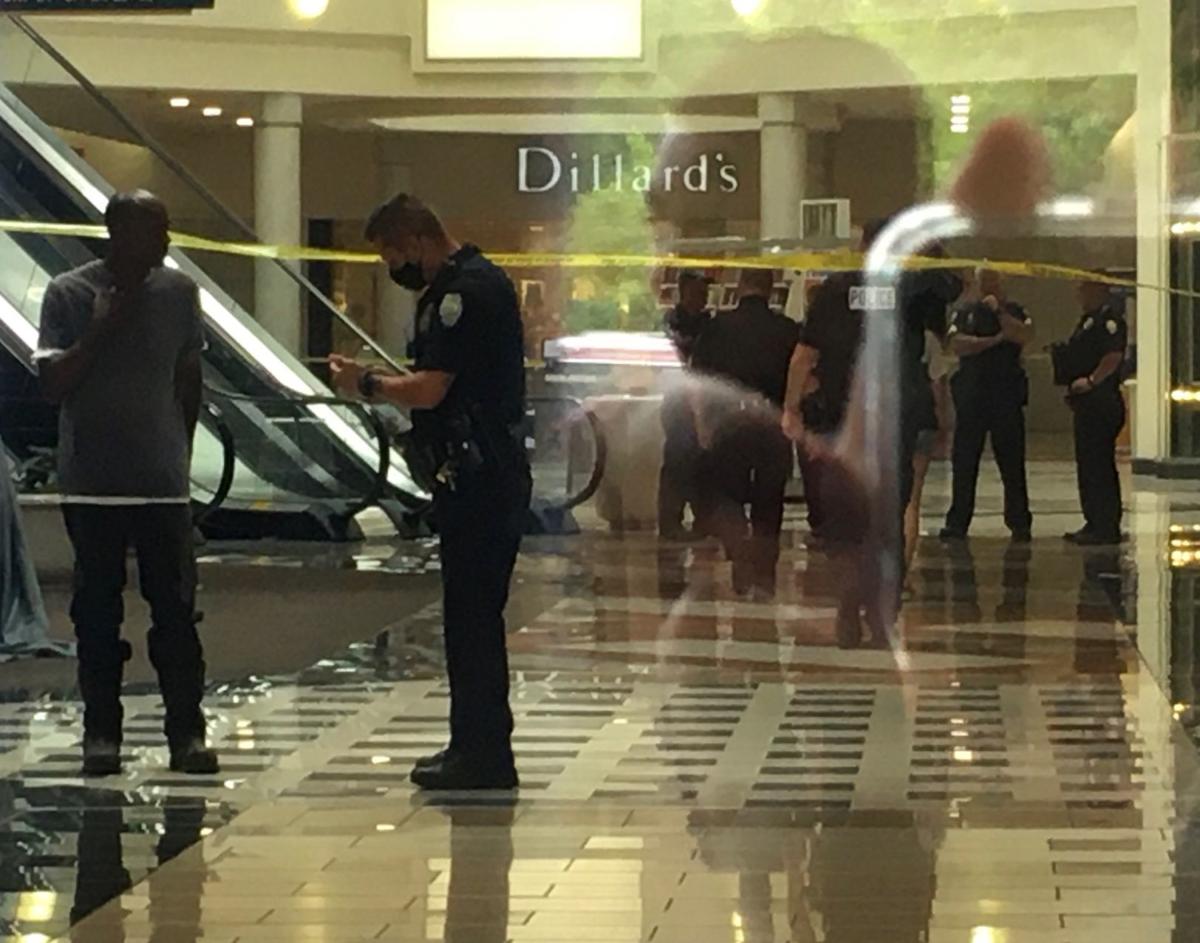 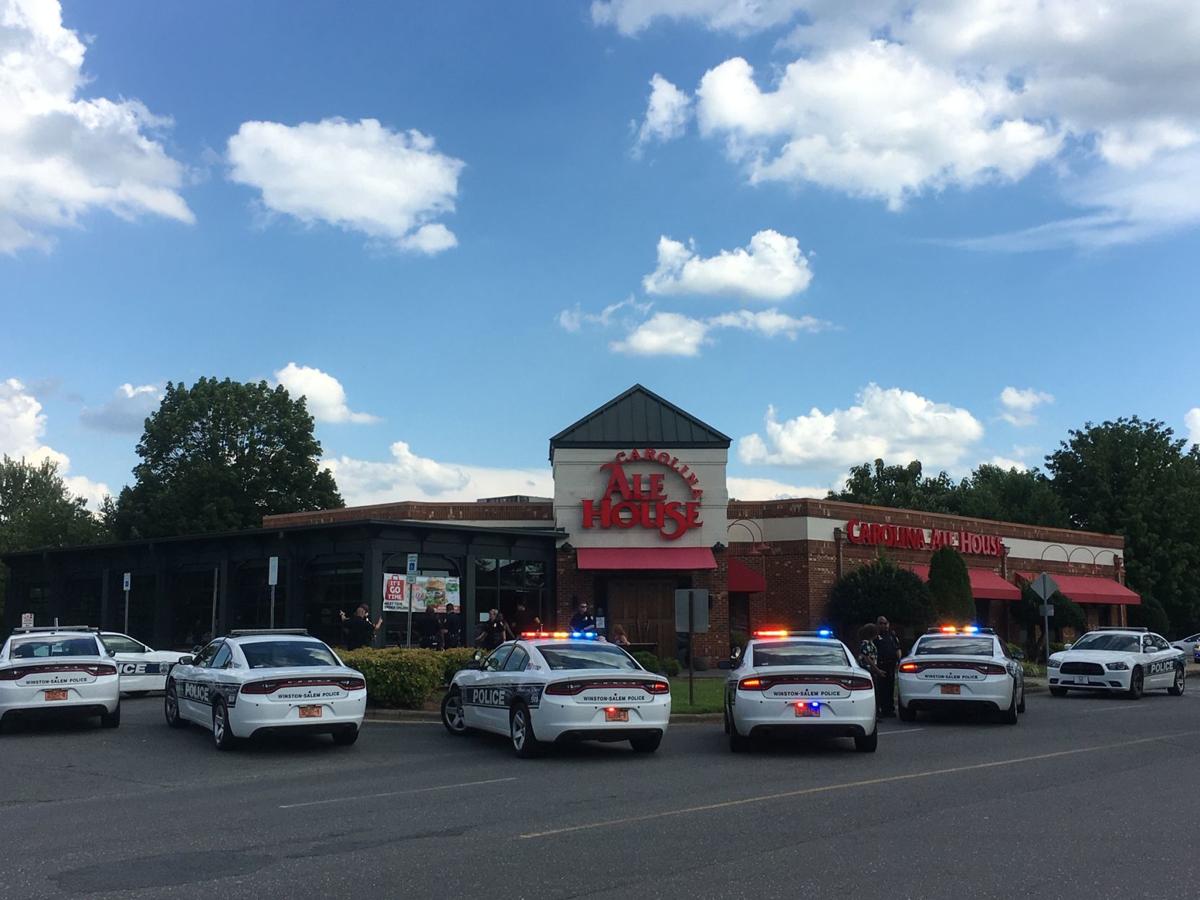 A heavy police presence was visible outside Carolina Ale House near Hanes Mall on Monday afternoon.

The incident occurred about 4:30 p.m. in the mall's lower level, a mall employee said.

Another worker, who asked not to be identified, said shoppers were running into stores, warning employees to hide.

Two people who heard the gunfire said that officers quickly responded with their guns drawn and chased the shooter from the mall through the south parking lot to the Carolina Ale House. The officers then arrested a man inside the restaurant, witnesses said.

Toney Thompson of Winston-Salem said he heard the shots as he was walking toward the food court on the mall’s second level.

“It was a real melee,” Thompson said. “It was really terrible out here.”

James Howie of Winston-Salem said he was eating in the food court when he saw a man below him on the mall's lower level randomly shooting a handgun into the air. He said that the suspect then ran from the mall and to the bar/restaurant where officers arrested him.

When the shooting started, some people at the food court hit the floor while others ran from the gunfire, Howie said.

After the shooting, Winston-Salem police cars surrounded the mall's south entrance and the Carolina Ale House.

Don Martin of Winston-Salem said he was walking into Bath & Body Works inside the mall when the shooting started.

Moments before he entered the store, a bullet struck a sign inside the business about 2 feet from where he had been walking, Martin said.

Martin was among eight customers whom the manager escorted to her office for their safety immediately after the gunfire, he said.

"She kept checking on us," Martin said.

Mario Falls, who lives in Forsyth County, said he was standing outside the mall's south entrance when the gunfire erupted.

"It was quiet, then a few shots were fired," Falls said. "It wasn't good."

Falls moved away from the entrance when the shots were fired, he said. Falls didn't see the alleged shooter being chased by officers through the parking lot, he said.

Police closed the mall’s south entrance after the shots were fired.

The mall remained closed for the remainder of Monday, said Stacey Keating, a spokeswoman for CBL Properties LLC of Chattanooga, Tenn., the owner of Hanes Mall,

Keating referred questions about the shooting to the Winston-Salem police.

Katherine Goldfaden, a spokeswoman for the Carolina Ale House, said that company officials are cooperating with Winston-Salem police in their investigation of the shooting.

Monday's incident was at least the third shooting at Hanes Mall in the past year.

Isaac Banos-Salazar, who was 18 at the time, was arrested and charged with assault with a deadly weapon inflicting serious injury, discharging a firearm into an occupied dwelling and other offenses, Winston-Salem police said. Banos-Salazar was released from custody after he posted a $50,000 bond, the Forsyth County Sheriff's Office said.

On Aug, 6, 2019, Julius Randolph Sampson Jr., 32, was shot and killed outside BJ's Restaurant and Brewhouse at Hanes Mall. Robert Anthony Granato, 23, of Cloverhurst Court is charged with first-degree murder and carrying a concealed weapon in connection with Sampson's death in a racially charged incident.

Sampson was black. Granato, who is white, was being held Monday night in the Forsyth County Jail with his bond set at $503,000, the sheriff's office said.

The city of Winston-Salem has filed a nuisance abatement action against the owner of the Liberty Street Citgo gas station. The business proper…

STOKES COUNTY — An arrest has been made after a man allegedly ran over a park ranger at Hanging Rock Park on Sept. 6, the Stokes County Sherif…

Police arrest a Walkertown man in connection with an assault on a homeless man, authorities say

A Walkertown man has been arrested after investigators found more than 500 photographs and 150 videos of child pornography at his home, author…

A Winston-Salem man was shot Tuesday afternoon in the city's northern section and later died of his injuries, authorities said.

Authorities found the body Friday afternoon of a Winston-Salem man who was apparently stabbed to death.

Winston-Salem man died last year from a gunshot wound to his head, according to autopsy report

A Winston-Salem man died last year from a gunshot wound to his head, according to his autopsy report. His former girlfriend says she wants jus…

A heavy police presence was visible outside Carolina Ale House near Hanes Mall on Monday afternoon.