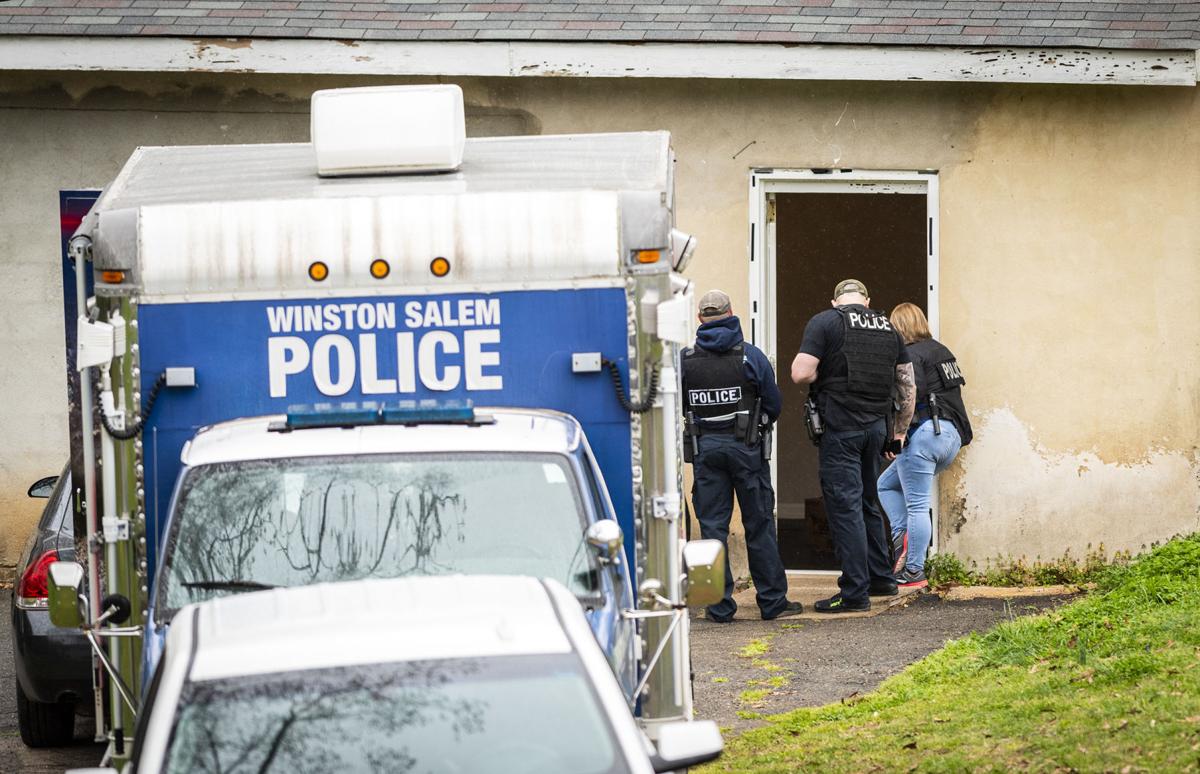 Officers with the Winston-Salem Police Department execute a search warrant at the home of Toni Renee Handy and Christopher Mock on Tuesday, March 24 in Winston-Salem.

A Forsyth County man who was shot to death after leading sheriff’s deputies on a milelong chase had told his former wife that he had accidentally shot his girlfriend in the face and then shot her again, killing her, search warrants filed in the case allege.

In March, Forsyth County sheriff’s deputies had tried to stop Christopher Joel Mock, who was a person of interest in the disappearance of his on-and-off again girlfriend, Toni Renee Handy. Winston-Salem police would later find Handy’s body in the house that Mock and Handy lived in at 4502 Kimball Lane.

Gidget Spencer, Handy’s daughter, told the Winston-Salem Journal in March that she had received several Facebook messages from Mock, which led her to report her mother missing. In one of those messages, Mock falsely told Spencer that Handy had COVID-19 and was in quarantine.

When Winston-Salem police officers entered Handy’s house, they found blood spatter on the walls of the living room and several handwritten notes on the walls that referenced COVID-19, according to one of the search warrants. Police didn’t provide any further details in the search warrant about what the writings said.

Mock also told another of Handy’s family members that he and Handy had COVID-19, the respiratory disease caused by the novel coronavirus, according to search warrants. Officers contacted Wake Forest Baptist Medical Center and Novant Health and learned it would take four to 12 days to get a result for COVID-19 and “therefore Mr. Mock and Ms. Handy would not have received a result for the test.”

Handy was last seen March 20 at the Murphy Express gas station at 3820 Oxford Station Way, where she worked. The station is just off Hanes Mall Boulevard, near Hobby Lobby. She was seen getting into her pickup with Mock. Spencer said she spoke to her mother the next day, March 21. Her mother told her she was going into work and would call her back. Handy never did.

And according to the search warrant, Handy never returned to work after March 20. Sherry Lange, a manager at the gas station, told police that she received a text message from Handy reading, “Hey sorry to do you like this but I won’t be in for awhile.”

In the text message, Handy said she didn’t want to risk getting the new coronavirus.

“They fixing to call a quarantine anyway,” the text message said, according to search warrants.

She said that Handy had told her about arguments between her and Mock and that Handy would come into work upset.

Tonya Mock, Mock’s former wife, called Winston-Salem police, telling detectives that Mock had called her and had admitted that he had accidentally shot Handy after an argument at Handy’s house on Kimball Lane.

“Ms. Mock advised Christopher admitted to her that he killed Ms. Handy after the initial shot because Ms. Handy was suffering from the first shot,”according to the search warrants.

Police have not released a cause of death, and an autopsy report has not been released. Lt. Gregory Dorn of the Winston-Salem Police Department could not be reached immediately Wednesday for comment.

Spencer said Mock initially told her via Facebook that he was fishing and that he would have Handy call her when he got back to the truck. Handy never called. Spencer continued to call her mother on March 22, a Sunday, and got no response. She kept calling on Monday, March 23, and only after she threatened to call the police did she get a response from Mock on Facebook, where he told her Handy had COVID-19. That night, she filed a missing-person report.

At 1:50 p.m. March 24, a Forsyth County sheriff’s deputy on patrol in Clemmons saw Handy’s truck near the intersection of Clemmons and Hampton roads, and after checking the truck’s license plates, the deputy tried to pull the driver over.

The driver, Mock, didn’t stop and led deputies on a mile chase through the area, including the shopping center parking lot on Lewisville-Clemmons Road where the Lowes Food and Staples office-supply stores are located.

Mock went through the parking lot, hopped a curb and collided with another truck.

Four deputies — M.M. Luffman, A.K. Mills, C.W. Nowlin and E.L. Rivera-Correa — fired their weapons. According to the sheriff’s office, the deputies shot Mock after he didn’t comply with their commands. The sheriff’s office has not released any other information about the shooting.

The State Bureau of Investigation is reviewing the shooting. The deputies are on administrative leave pending that the outcome of that investigation, which is routine. SBI Special Agent in Charge Scott Williams said the investigation should be completed later this month. A report will be turned over to Forsyth County District Attorney Jim O’Neill.

O’Neill will decide whether the deputies used excessive or appropriate force.