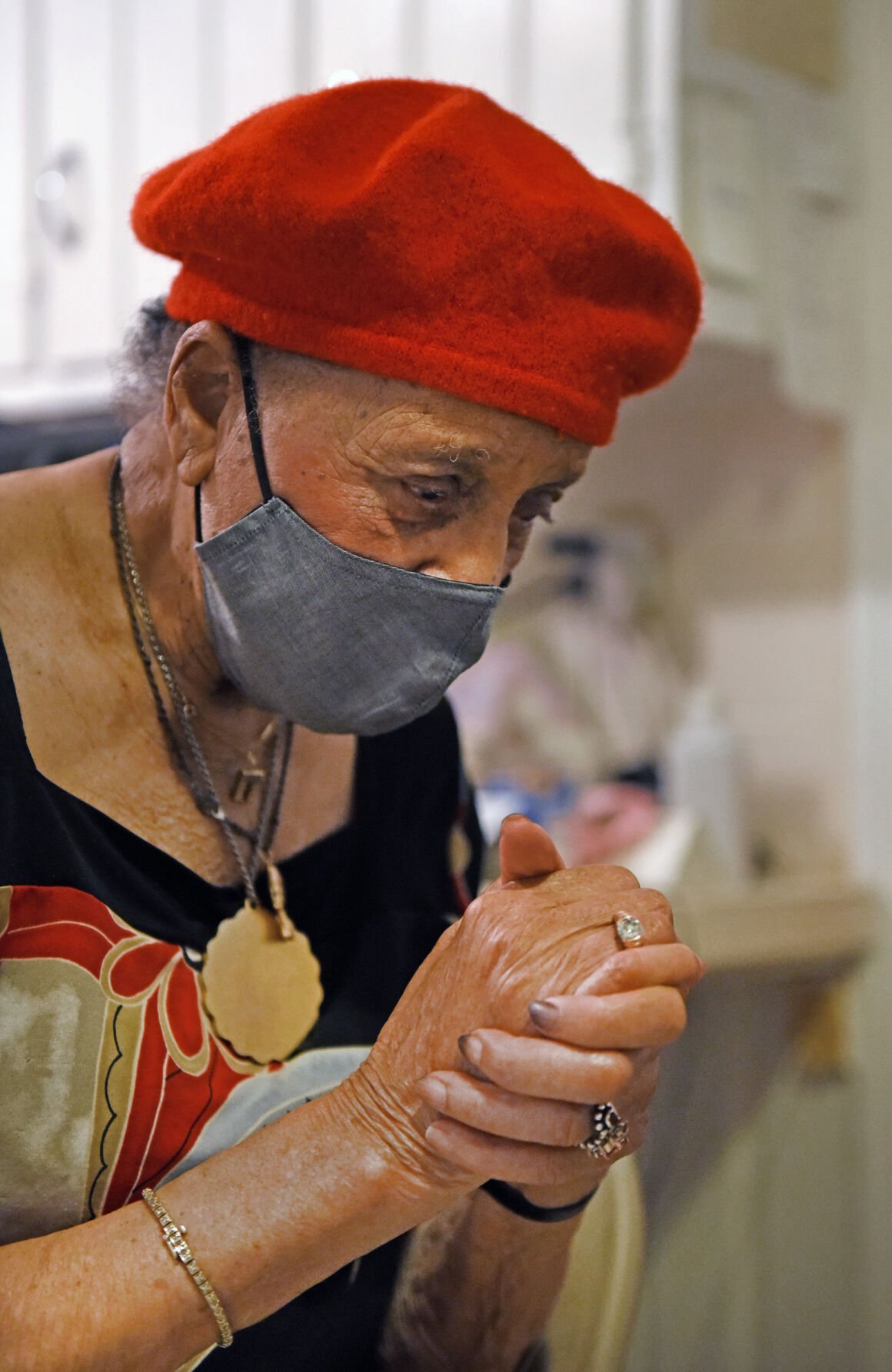 Virginia Newell stops to pray along with a preacher at the inauguration of Joe Biden and Kamala Harris at her home on Wednesday. Newell, who is 103, is a member of Alpha Kappa Alpha, the same sorority as Vice President Harris. 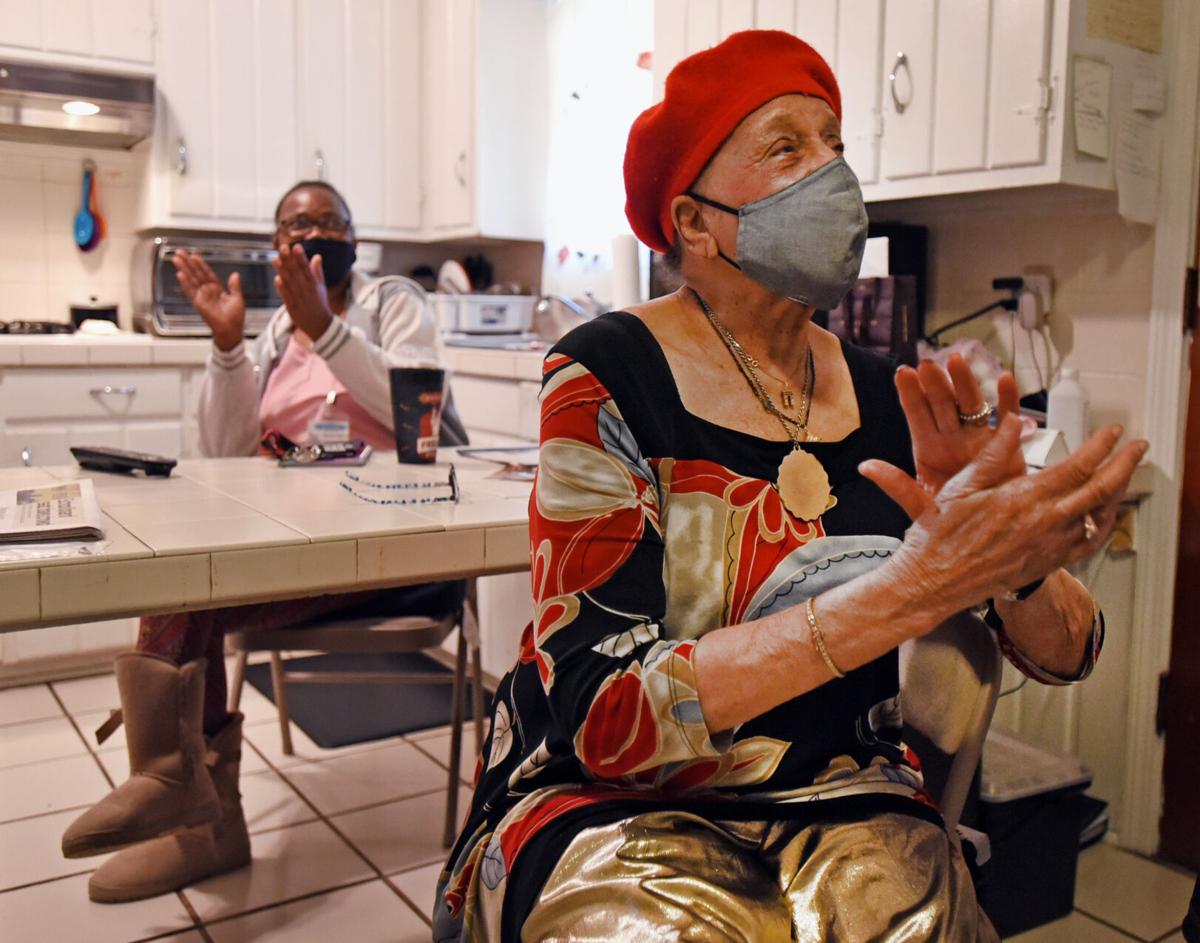 Virginia Newell (right) and her caregiver, Vanessa Mitchell, applaud during the inauguration of Joe Biden and Kamala Harris as they watch from Newell's home on Wednesday. Newell, who is 103, is a member of Alpha Kappa Alpha, the same sorority as Vice President Harris. 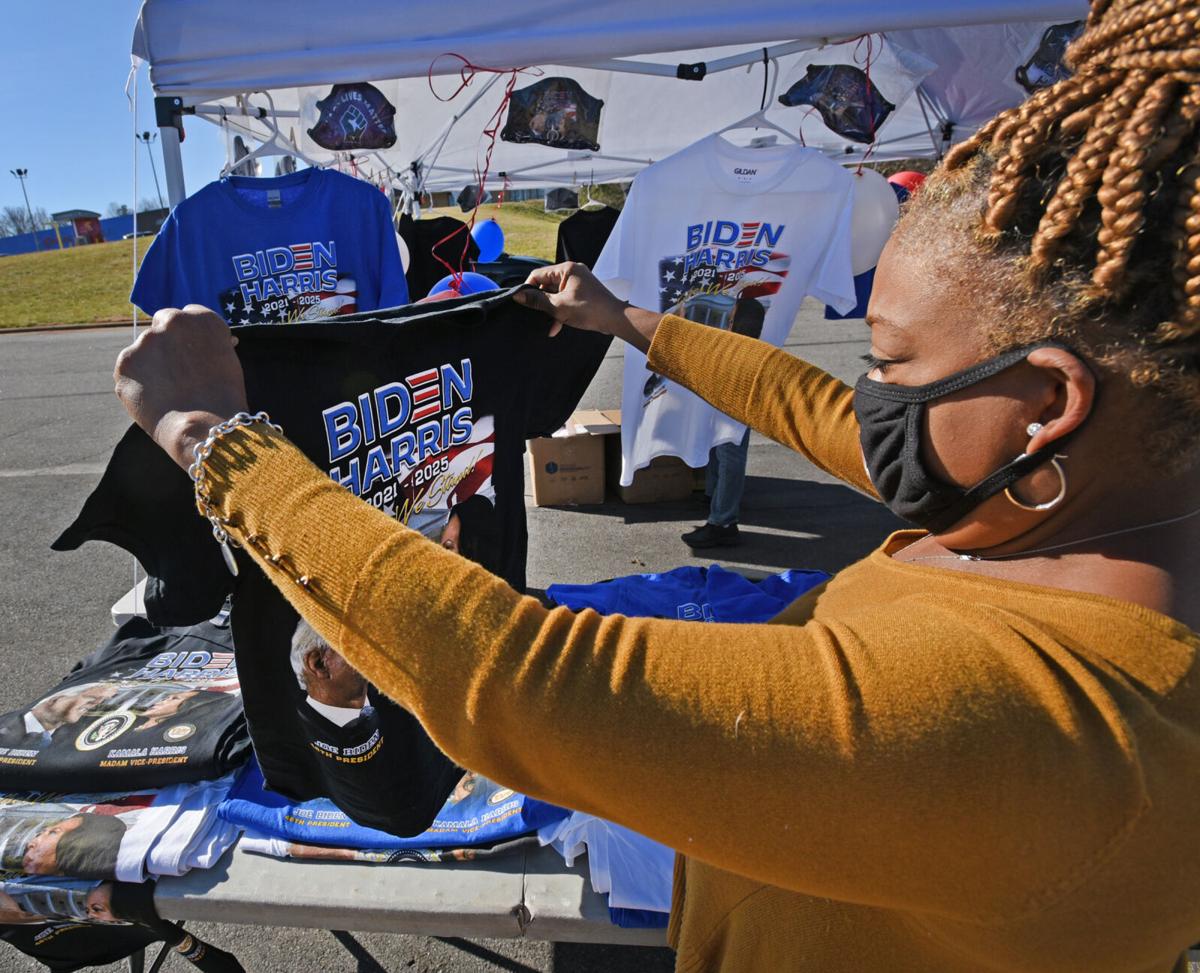 Lisa Matthews looks at t-shirts commemorating the Biden Harris inauguration at a Cameron's Gear tent near the East Winston shopping center on Wednesday.

Having seen Kamala Harris sworn in as vice president on Wednesday, Virginia Newell hopes Harris will be elected in the future to the country's highest office.

Newell, a former member of what was then the Winston-Salem Board of Aldermen, said she was excited about Harris becoming the first Black American, South Asian American and woman to serve as vice president.

Photos: Kamala Harris through the years

Harris is also the first graduate of a historically black college or university to become the nation's vice president. Harris graduated from Howard University in Washington, D.C., in 1986.

"Kamala is young enough," Newell said. "She’s strong enough, having been a prosecutor. And I believe the people will elect her (as president). She is a go-getter."

Harris will represent the interests of all Americans, said Newell, a professor emeritus at Winston-Salem State University. Newell was elected to the city's Board of Aldermen, which is now the Winston-Salem City Council, in 1977.

Newell, a member of Alpha Kappa Alpha sorority, said she's proud that Harris is an AKA sorority member as well. Harris joined the sorority's original chapter at Howard University in 1986.

"I'm so proud that all Americans are getting someone who we can be proud of," Newell said. "I think we are going to turn this country around."

Harris wore pearls at the inauguration, just as she has worn them in Congress, as a California senator and on the 2020 campaign trail.

The pearls were a nod to Alpha Kappa Alpha — the strand of 20 represents the 20 founders and incorporators of the historic Black sorority.

The pearls tradition started with black women who are sorority members at the Divine Nine, a group of the original Black sororities and fraternities that includes AKA, Hartsfield said.

"At Spelman College, we wore black dresses and pearls once a week," said Hartsfield, a member of Delta Sigma Theta, another black sorority.

As for the Chuck Taylor sneakers, Harris wears them because they're comfortable, according to news reports. Harris often slipped into the Converse shoes when she was campaigning for president and again when she became Biden's vice presidential nominee.

Harris told CBS Sunday Morning that the sneakers are her "casual go-to" — and she's got plenty of pairs to spare.

Harris is a role model for all women because "there are no barriers. You (women) can be what you want to be as long as you stand up for what is right and good and continue to speak boldly for what is right in the world," Hartsfield said.

Felicia Piggott-Long of Winston-Salem, a member of the AKA sorority, said she also wore pearls on Wednesday to salute Harris.

"I'm just very proud of her," said Piggott-Long, an English and theater-arts teacher at Carver High School. "She has shown our young women and young girls an example of progress and a triumphant effort because she (kept) moving forward.

"We are better for what she has done as a woman and for what she had done as an American," said Piggott-Long, the pastor at Alpha and Omega Church of Faith in Winston-Salem.

Harris' vice presidency reminded Piggott-Long of Proverbs 18:16, which says, "A man's gift makes room for him and brings him before great men."

"This applies to a woman as well," Piggott-Long said. "Her gift of leadership has enabled her to fulfill her vision. Her gift has opened a door for her in life."

Anuradha Williams, the dean of humanities and social sciences at Forsyth Technical Community College, said that Harris becoming the vice president Wednesday was a proud moment for her.

"This is just historical," said Williams, a native of Singapore. "She (Harris) has excelled. She has a warm personality and a warm smile.

"I'm also proud of being of South Asian descent myself," said Williams whose father immigrated to Singapore from India. "I am very excited. That is what democracy is all about."

Ballpark suites being rented for office space in Winston-Salem

Owners of the Winston-Salem Dash have decided to lease suites at Truist Stadium for office space, giving professionals a chance to work at wha…

Virginia Newell stops to pray along with a preacher at the inauguration of Joe Biden and Kamala Harris at her home on Wednesday. Newell, who is 103, is a member of Alpha Kappa Alpha, the same sorority as Vice President Harris.

Virginia Newell (right) and her caregiver, Vanessa Mitchell, applaud during the inauguration of Joe Biden and Kamala Harris as they watch from Newell's home on Wednesday. Newell, who is 103, is a member of Alpha Kappa Alpha, the same sorority as Vice President Harris.

Lisa Matthews looks at t-shirts commemorating the Biden Harris inauguration at a Cameron's Gear tent near the East Winston shopping center on Wednesday.