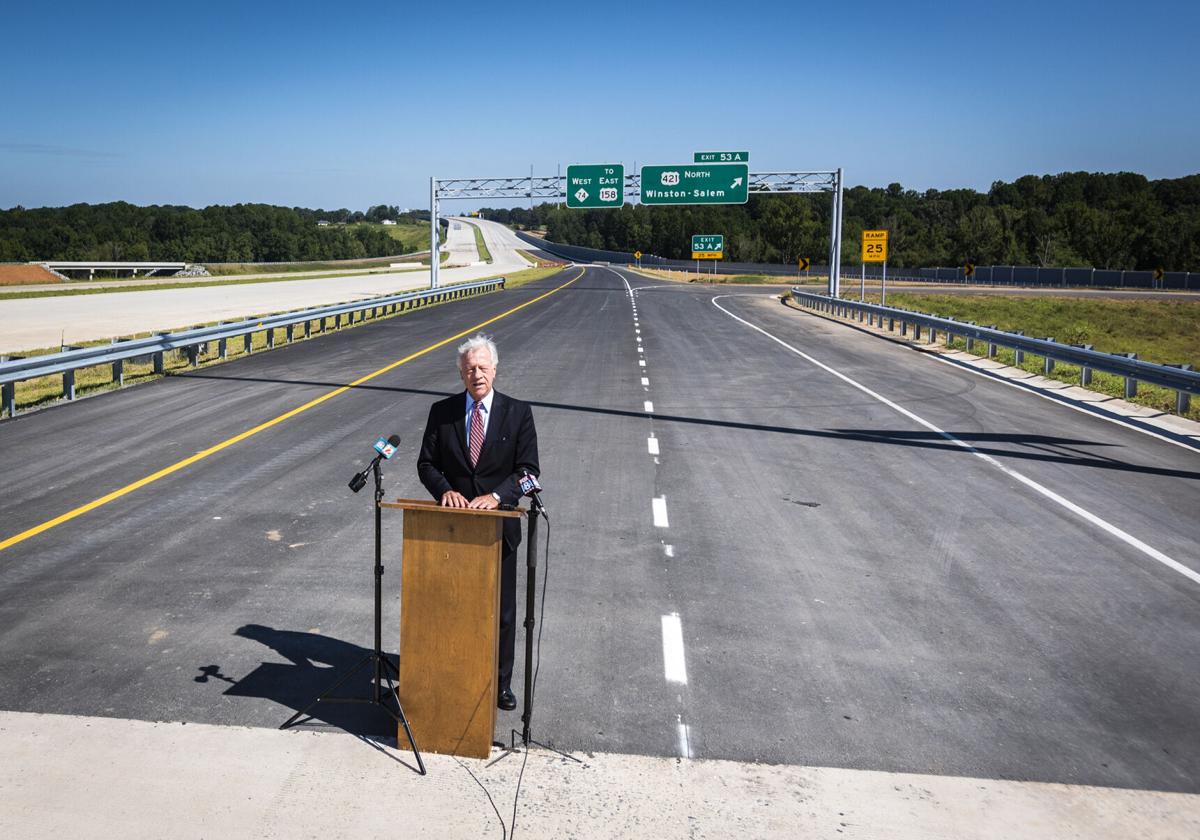 Winston-Salem Mayor Allen Joines speaks while standing on the first segment of Winston-Salem Northern Beltway on Friday in Kernersville. 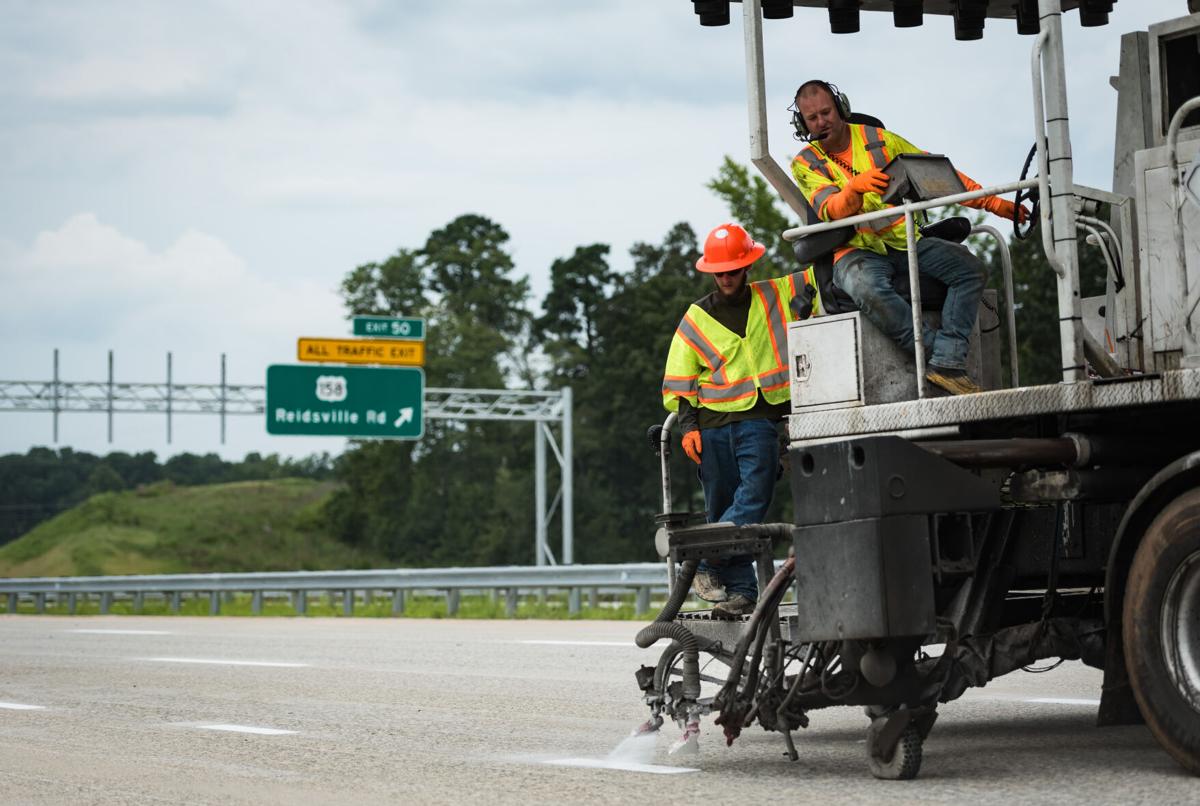 A crew paints lanes onto the nearly completed segment of the Winston-Salem Northern Beltway on Aug. 12 in Walkertown. 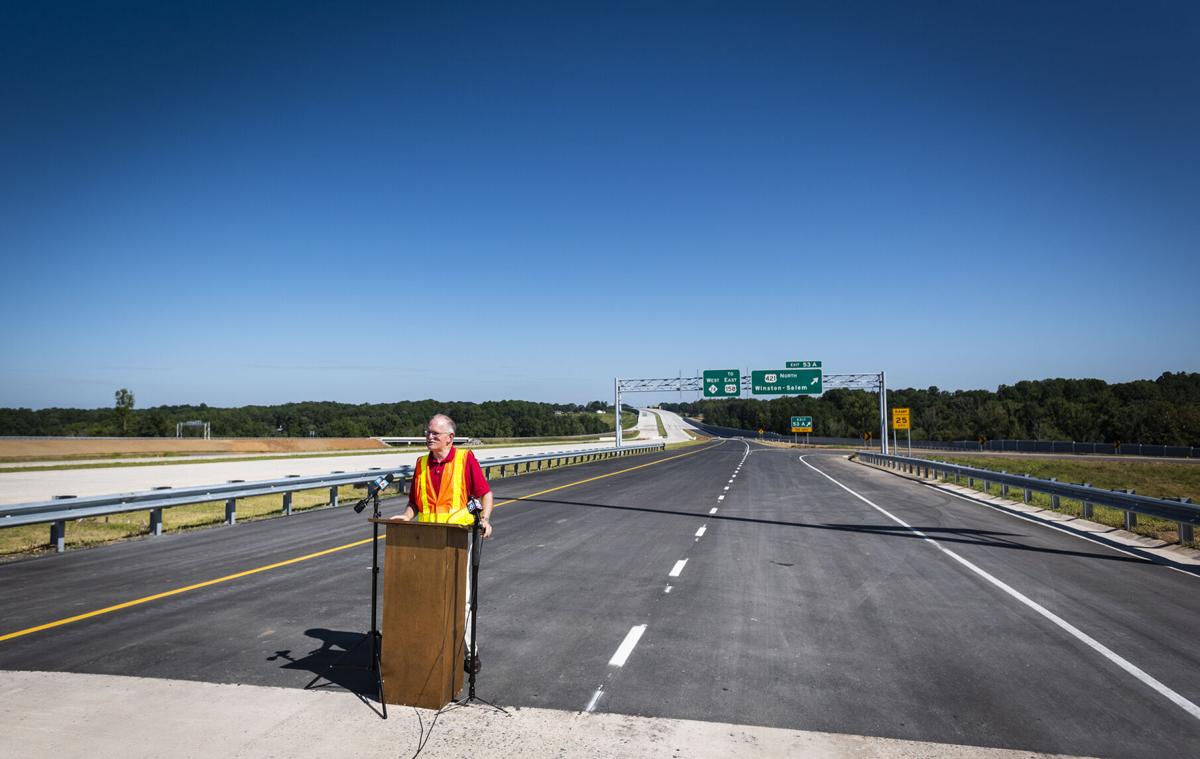 The first segment of the Winston-Salem Northern Beltway was scheduled to open in the early morning hours today, offering drivers a high-speed connection between Salem Parkway and Reidsville Road.

Photos: Opening of the First Segment of the Winston-Salem Northern Beltway

By Christmas, the beltway may be open as far north as New Walkertown Road. And sometime in 2022, the beltway should be complete between Salam Parkway and U.S. 52 on the northern side of Winston-Salem.

Winston-Salem Mayor Allen Joines and other local leaders hailed the road during a Friday news conference as a long-awaited transportation improvement that can also boost development prospects on the northeastern side of Winston-Salem.

"This is one of those special days that we will look back on," Joines said, speaking from the northbound lanes of the bridge where the new freeway crosses Salem Parkway. “It will open development opportunities all along the way at the interchanges on the northeast side of our city.”

When finished to U.S. 52, Joines said, the beltway will relieve some of the traffic pressure on U.S. 52 through the center of Winston-Salem.

Pat Ivey, the division engineer for the N.C. Department of Transportation in Forsyth County, said that when the second segment opens between Reidsville and New Walkertown roads, the town of Walkertown should see some relief from heavy traffic on N.C. 66 through the center of the town.

The new freeway will have three travel lanes in each direction and have a speed limit of 65 miles per hour, Ivey said.

Built at a cost of some $165 million, the first beltway segment has been under construction since 2014. Originally planned for opening in November 2018, the project ran into delays that Ivey ascribes to no one particular thing: Weather, additions to the work and utility delays all played a part, he said.

Officials weren’t worried about delays on Friday. Standing on the bridge that carries the new freeway over Salem Parkway, Mark Owens, the president and chief executive of Greater Winston-Salem Inc., said the completion of the first beltway link, on top of the recently-opened Salem Parkway renovation, are both signs that “in Winston-Salem and Forsyth County we get projects done.”

Acknowledging the business challenges of the COVID-19 pandemic, Owens said the new road is going to help when the coronavirus is in the rear-view mirror.

“We are primed for the strongest rebound in the country,” Owens said. “We’re so thrilled that Winston-Salem and Forsyth County are poised for another explosion of growth.”

The first beltway segment has no exits along the 3.5 miles that it covers between U.S. 421 and U.S. 158. The freeway crosses over West Mountain Street without an interchange, and passes under Walkertown-Guthrie Road.

Meanwhile, work is progressing apace on the sections of the beltway to the north of Reidsville Road. The segment between Reidsville and New Walkertown roads is only 1.4 miles and crosses under Williston Road en route.

Along the way, that section of the freeway will have interchanges at Baux Mountain and Germanton roads.

While the beltway between New Walkertown Road and University Parkway is supposed to finish in 2021, it may be another full year before the massive “spaghetti interchange” under construction where the beltway joins U.S. 52 is finished.

To bridge that gap, motorists will use temporary ramps for a partial connection between the beltway and U.S. 52.

Andy Perkins, the representative of state highway Division 9 (which includes Forsyth County) on the state transportation board, said during Friday’s news conference that he has confidence that the work going forward can proceed “as quickly as possible.”

Photos: Opening of the First Segment of the Winston-Salem Northern Beltway

Winston-Salem Mayor Allen Joines speaks while standing on the first segment of Winston-Salem Northern Beltway on Friday in Kernersville.

A crew paints lanes onto the nearly completed segment of the Winston-Salem Northern Beltway on Aug. 12 in Walkertown.