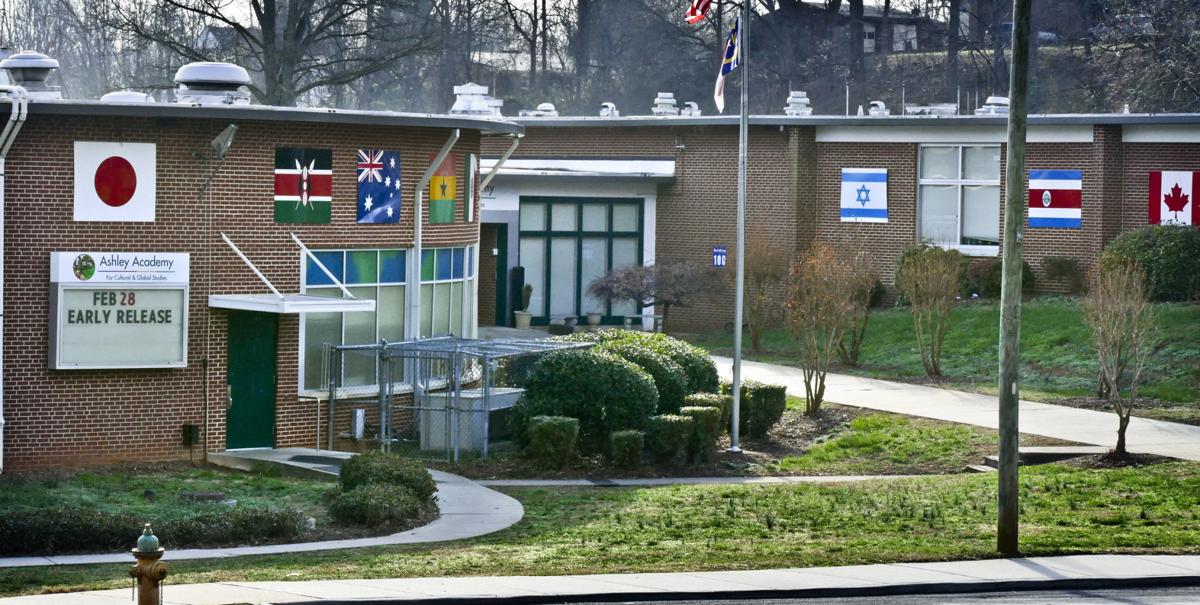 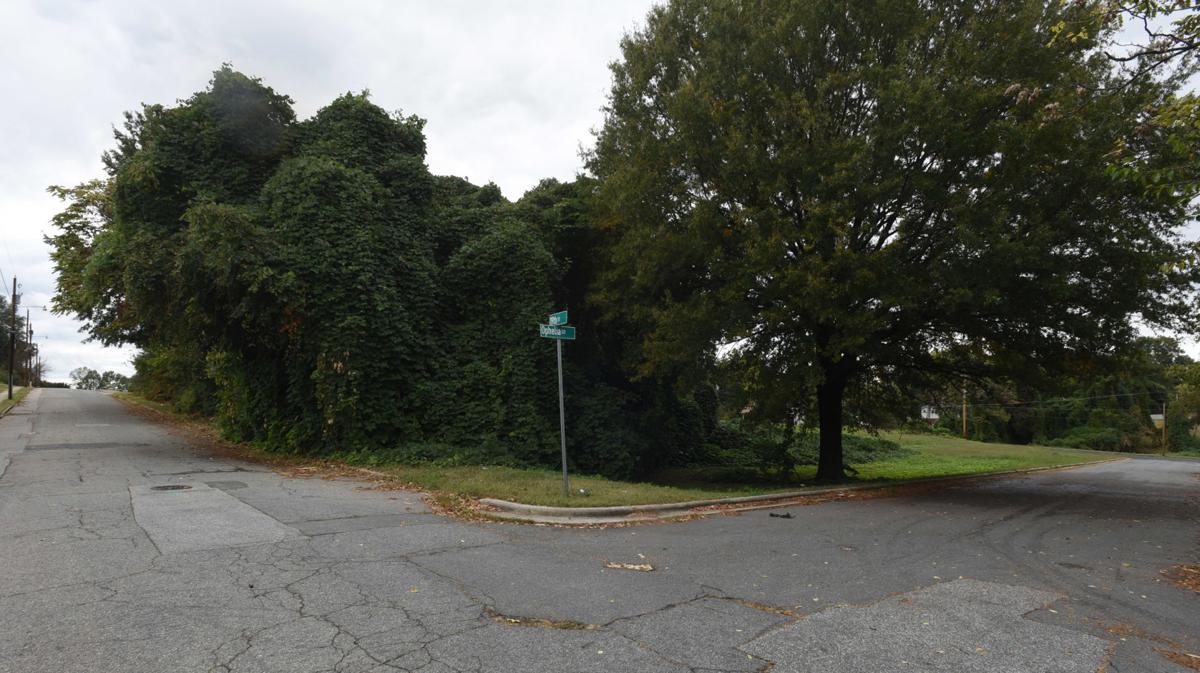 A proposed elementary school to replace Ashley Elementary could be located on what is now a wooded area on the border of Fairview Park. (Walt Unks/Winston-Salem Journal) 20191017w_nws_ashley 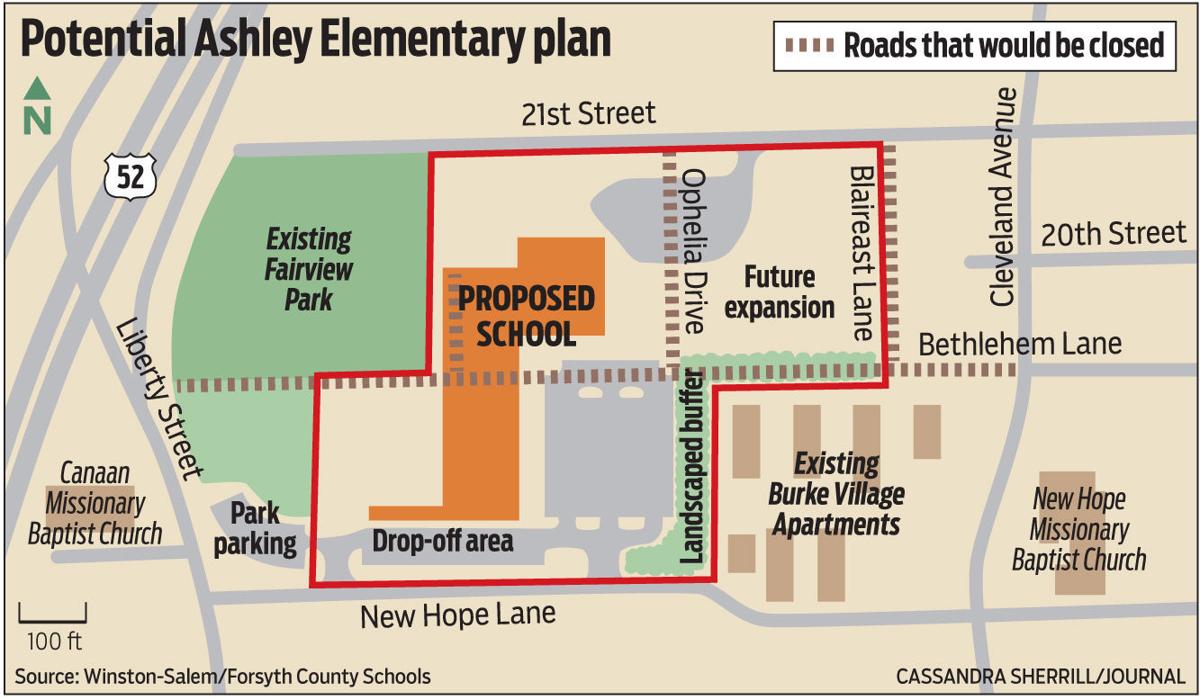 A proposed elementary school to replace Ashley Elementary could be located on what is now a wooded area on the border of Fairview Park. (Walt Unks/Winston-Salem Journal) 20191017w_nws_ashley

A city panel recently recommended the sale of land to the Winston-Salem/Forsyth County Schools near Fairview Park for a new Ashley elementary school but getting to a completed bricks and mortar building could take some time.

Following the Finance Committee of the Winston-Salem City Council’s unanimous vote to sell the land, the full city council is expected to vote on the sale of 18 lots of surplus property for $207,076 at its meeting on Monday.

“There are still some steps in the process to go,” said Walker, WSFCS’s assistant superintendent of operations.

“This is one step down a long road,” Sonnen-Lee said.

The Action4Ashley Coalition started in 2017 as a group of concerned citizens and organizations advocating for students, teachers and staff at Ashley Academy for Cultural & Global Studies, which is off Bowen Boulevard in eastern Winston-Salem. The group changed its name in the fall of 2018. Since then, the group has expanded its focus and is now a multiracial coalition advocating for equity for students in Winston-Salem/Forsyth County Schools.

Action4Equity is hopeful that a resolution to sell the land will be passed by the city council on Monday.

Sonnen-Lee said that securing the land is an important step in the planning process, saying that WS/FCS officials can’t plan for such things as grading the land, connecting a sewer system or getting electricity to the building if they don’t know what lot they will work on.

“This is an important part so that they can move forward with planning,” she said. “Of course, when planning happens, we will work hard to get community members at the planning meetings that the school system has with the community so that the parents can really advocate for what they want to see in the new school.”

Ashley Academy has been in the spotlight for some time because of concerns over indoor air quality at the school.

The Winston-Salem/Forsyth County school board decided last year to put in a new HVAC system as a temporary solution at the existing school.

The cost was more than $1.5 million in total that also covered repairs to the roof, ceiling and other areas in the building.

In August 2018, the Action4Ashley Coalition filed a complaint against Winston-Salem/Forsyth County Schools and the school board with the U.S. Department of Education’s Office for Civil Rights, claiming inaction and neglect in regard to concerns about mold and indoor air-quality at Ashley Academy for Global and Cultural Studies. The

“Specifically, complainants seek remedies for the district’s inadequate and discriminatory response to the long-term and persistent complaints from parents and school staff that mold, water leaks, excessive moisture and poor indoor air quality at Ashley Academy are impacting the health, safety, and education of students and teachers,” the complaint reads.

It concludes by stating that the school system’s “inadequate and sluggish response to the Ashley crisis cannot be explained by any reason other than intentional racial discrimination,” violating Title IV of the federal Civil Rights Act.

The group asked for a new school as soon as possible.

The Office for Civil Rights opened an investigation in December 2018.

The land and process

The tracts of land are vacant that the city would sell to the schools. The city bought the tracts more than 10 years ago, and in 2005 decided to sell them to the Housing Authority of Winston-Salem, which placed a deposit on the properties but never followed through with the purchase. The plan is for the city to now rescind the HAWS’ agreement and return HAWS’ bid deposit of $5,800.

In addition to the city land, the school district would acquire about 2½ acres from HAWS and 1½ acres from individual property owners.

Overall, the purchases should total 10 to 12 acres and there are between eight and 10 different owners.

“Right now, all of them are optioned under contract,” Walker said referring to the properties.

Voters in 2016 approved a $350 million bond package that includes money for design work for the new Ashley Academy but no money to purchase land and build the school.

Walker said that if the city council approves the sale of the land to the school system, then the Winston-Salem/Forsyth County Schools Board of Education will have to find and approve a source of money to pay for the land.

Next, the school board would need to get approval from the Forsyth County Board of Commissioners to purchase the land.

“Right now, what we’re trying to do is just secure the property,” Walker said.

He said that the 2016 bond money to design the school would not be available until around the 2023-24 school year.

Although the process will be stretched out over time, Walker said, he believes the favorable recommendation by the Winston-Salem Council’s Finance Committee “will allow the community to feel like the board has heard their request and that they have done something and tried to move forward by purchasing this land as a location for a future school, whenever that may be.”

Action4Equity hopes that things will move as quickly as possible.

“Every day that students stay in that school is another day that they are inhaling mold, and we know the effects of that is really detrimental to their health and their learning,” Sonnen-Lee said.

The group likes that the possible site for the new school is about six blocks from the existing Ashley Academy.

“We’re advocating on what the community and the parents want and we heard over and over again from the community that they wanted to make sure that the new Ashley school stayed in the same neighborhood to serve the same children,” said Sonnen-Lee.

Ashley advocates have pointed to how the district handled problems at Hanes/Lowrance middle school. The schools were closed in February 2015 after pressure from parents concerned about toxic chemicals in the groundwater beneath the schools’ joint campus. In that case, the board voted in February to close the school and the students were moved in March.

Walker said that from a facility perspective, the existing Ashley school “is a solid building that functions well.”

Some people have questioned the need for a new Ashley school and voiced concerns that recently proposed development in the area could cause gentrification.

For example, HAWS is hoping to win a $30 million grant for redevelopment in the nearby area of Cleveland Avenue Homes, a public housing project.

Kellie Easton, president of Action4Equity, said that Ashley Academy needs a new location because the existing building is behind a creek.

“There will always be these high levels of moisture,” Easton said.

She said that Ashley is not the only school with such issues, but she said, “When you look at the schools that are being built on the peripheral in the white communities, you don’t have those types of problems.”

“She believes that people have learned from the past.

“I don’t think it’s going to be as easy to flip this one by without having the community and advocates for the community at the table to ensure that this is a school for black and brown children,” Easton said.

Still, she said that there is a possibility that the new Ashley could become an integrated school at some point.

“Our job, regardless, is to ensure that that school serves the demographic that it serves right now,” she said. “What that means for us is that they live in that area, that the school is in their zone.”

She added that for people to live in that area there needs to be amenities to serve the families, including affordable housing.

“That is around bringing about an environment that is conducive for successful outcomes for the students and also for their well-being,” said Covington. “The bottom line is that it’s about bringing about some equitable education for our students who have been basically challenged with environmental issues prior to that.”

She said although the school has been revamped there are still concerns that its environment could cause health issues.

She said that the Ministers’ Conference would like to see the construction of the new Ashley take place sooner rather than later.

“I think that in moving forward toward the selling of the land is a positive note,” Covington said. “But we still stand by our mission, which is to be a voice to the marginalized and disenfranchised and certainly those that are not receiving an equitable education. We stand with all those who are concerned with the environmental issues and are concerned with any lack of resources that are provided to the students at Ashley elementary.”

She said that HAWS and Urban Strategies Inc., a consultant, met recently with faith-based leaders to provide details about plans to redevelopment the area of Cleveland Avenue Homes.

“Now, we have a better understanding,” Covington said. “It’s going to enable the community members that are there to remain, and we feel confident that that is the goal of the work there, to provide as well a facelift and some improvements.”