Workers prepare absentee ballots for mailing at the Wake County Board of Elections in Raleigh on Thursday. North Carolina is scheduled to begin sending out more than 600,000 requested absentee ballots to voters today. 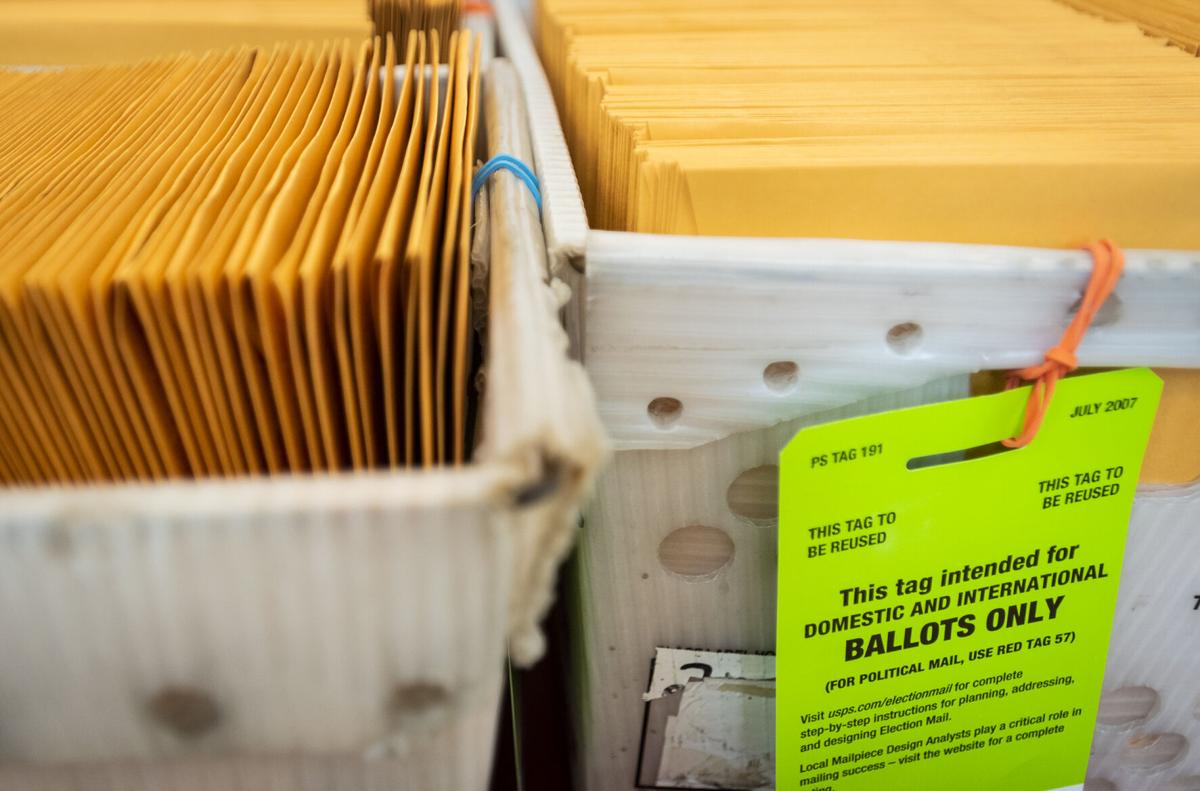 Absentee ballots sit on a mail cart Thursday in the Forsyth County Government Center in Winston-Salem.

Election officials here are gearing up to mail out more than 24,000 absentee ballots Friday and while the number is unprecedented, the elections director says he's confident his office can handle the load when all those ballots come back.

Friday's mailing is only the first of many: Voters have until Oct. 27 to request an absentee ballot, so there's no telling how many absentee votes will be cast in this election, held in the shadow of the COVID-19 pandemic.

Make sure your vote counts. Here's everything Forsyth voters need to know this election season.

Compared with 2016, the county has received six times as many requests for absentee ballots this far out from the election.

Tim Tsujii, the elections director here, said absentee voters can do his office a favor by returning their ballots sooner during the election cycle. Absentee votes received by 5 p.m. on Nov. 6 will be counted as long as they were postmarked by Election Day.

Voters don't have to provide any particular reason for voting by mail. All a voter has to do is call or visit the board of elections office in the Forsyth County Government Center, or even easier, apply online or download the form.

Analysis: Where Biden and Trump stand on 25 major issues

There are a few things to keep in mind:

* A voter has to mark the ballot in the presence of a witness. Because of the need for social distancing, the witness can observe through a window or the other side of a room. Voter and witness can use separate pens and use gloves and hand sanitizer for extra safety, officials say.

* In addition to mailing in an absentee ballot, people can drop them off at an early voting site between Oct. 15 and Oct. 31. To make that easy, people returning their ballots that way won't have to wait in the same line as people voting that day. Election workers will post signs at the polling place. Only a voter or a close relative can return a ballot this way. And workers will be getting the signatures of the person bringing in the ballot.

* Make sure your ballot is postmarked, if returning by mail. That's especially true for ballots that might arrive at the elections office during that three-day window after Election Day.

Fortunately for election workers — and campaigns wondering if their candidate won or lost — the elections office doesn't have to wait until Election Day to open all of those absentee ballot envelopes that are mailed back in.

Starting five weeks out from the election — that's Sept. 29, this year — the county's five-member election board will start meeting on Tuesdays and Thursdays to process absentee ballots.

The ballots will be removed from their envelopes and run through a scanner, but the totals won't be added up or released in advance of the polls closing on Election Day, Tsujii said.

Those twice-weekly meetings continue right on up to Election Day, which has a 2 p.m. meeting to process any remaining absentees that have come in by then.

With such as large number of absentee requests, Tsujii said, it is possible that the elections board may not finish the last pile of absentee ballots during that meeting. If that happens, he said, the board can schedule more meetings in the days following the election.

The high number of absentee ballots is not the only thing new this year: Because of the coronavirus pandemic, Tsujii and his workers have laid in plans for extensive sanitizing and other measures to keep people safe while voting.

For instance: the pens that voters use to mark a ballot will get only one use per voter this year. Sneeze guards — plastic barriers — will separate workers at the check-in table from the voters. Each voting booth will get wiped down in between voters.

Tsujii said voters will be encouraged to wear masks but that election workers can't force voters to do so. They will have extra masks on hand to anyone who needs one, he said.

Tsujii acknowledged that all the preparations sometimes make him wake up in the middle of the night.

"I will wake up thinking of another idea," he said. "It is on my mind continually. Our goal is to make sure we can administer the election effectively and fairly."

Tsujii said the office here has learned from the experience of other election workers in other jurisictions.

"I feel confident and optimistic," he said. "Yes, the pandemic has occurred within a year's time frame, but we have had the time since March to plan and prepare."

Workers prepare absentee ballots for mailing at the Wake County Board of Elections in Raleigh on Thursday. North Carolina is scheduled to begin sending out more than 600,000 requested absentee ballots to voters today.

Absentee ballots sit on a mail cart Thursday in the Forsyth County Government Center in Winston-Salem.