Apartments, retail planned for site in East Winston. New development will be on site of former dry cleaner
0 Comments
Share this
{{featured_button_text}}
1 of 2 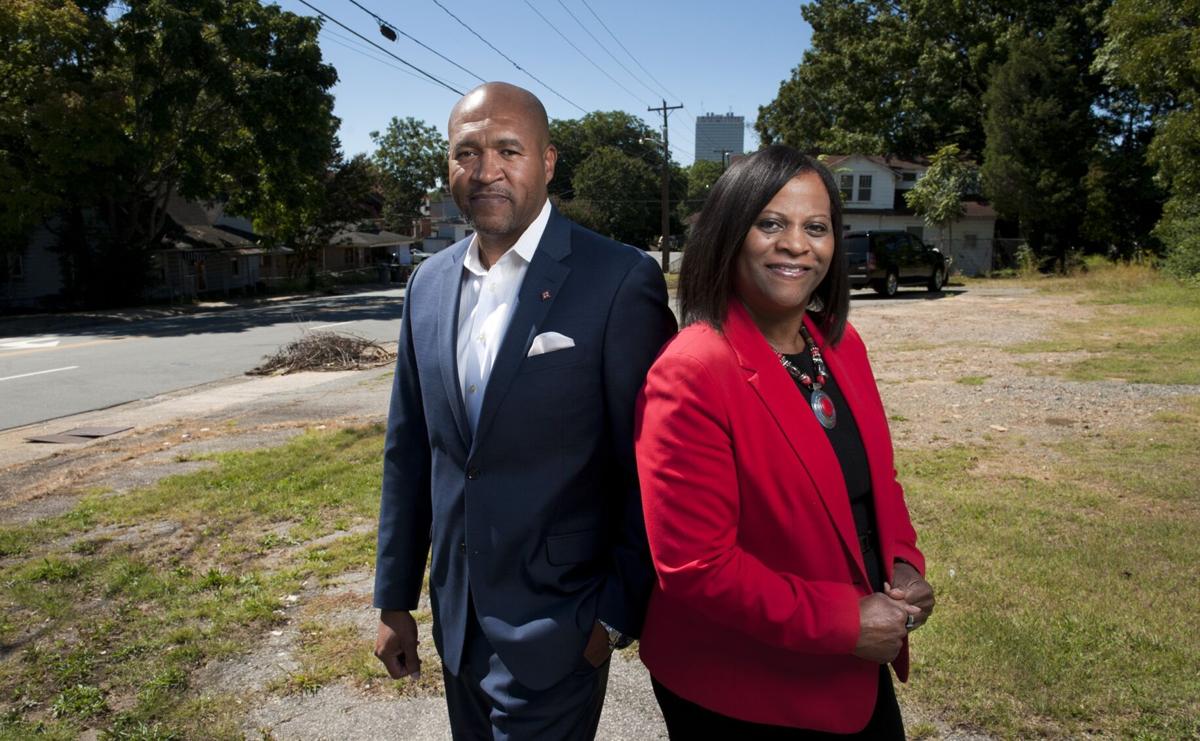 Michael and Charmon Baker are developing a 30-apartment building in the 300 block of Martin Luther King Jr. Drive The development, Ram’s Pointe, will have retail on the lower level.

A couple who grew up in eastern Winston-Salem is embarking on a plan to build a 30-unit apartment building with ground-floor retail spaces on Martin Luther King Jr. Drive, a development they hope will be a catalyst for others in a historic Black neighborhood.

Called Ram’s Pointe, the development will stand in the block of King Drive between Third and Fourth streets, on a site that has been under remediation because it once had a dry-cleaning business.

“This is something that has been a long time coming,” said Michael Baker, who with his wife Charmon is behind the development through their company, MTB3 Properties LLC. “We have been at this for about 10 years. Charmon and I were always passing and saw the land just sitting there. One day she said, ‘Wouldn’t it be nice to have a mixed-use apartment here, so we could have something nice like they do downtown.’ “

10% of the apartments will be for affordable housing, with the rest renting at market rates, the Bakers said.

“There will be at fitness center, washer and dryer connections, ceiling fans, granite counter tops, and a green space on top of the building with a view of the downtown area,” Charmon Baker said.

The Bakers bought the 0.6-acre property from the city of Winston-Salem for $110,700 in October 2019. The site is the location of a former dry-cleaning business and has been under remediation for hazardous vapors since 2016. Winston-Salem officials said the contamination is not on the city property that the Bakers acquired, but is on a separate tract to the west.

Michael Baker said the state will remove the monitoring equipment on the site when the project is ready for construction, and that monitoring wells may be installed on other parts of the property. He added that at a minimum, the planned building will have a vapor barrier and possibly a vapor mitigation system that can be turned on if it is ever needed.

“There will be no risk to the occupants when this is done,” he said.

City leaders have praised the planned development as a contributor to the East End Master Plan, which was passed by the Winston-Salem City Council in 2018 as a guide for redeveloping a neighborhood that’s close to the Innovation Quarter downtown, but separated from it by U.S. 52.

The plan calls for the neighborhood to develop with mixed-income housing that doesn’t displace current residents, with walkable streets and commercial spaces.

The Bakers say they want to start construction in the spring of 2022 and have a grand opening in January of 2023.

Ram’s Pointe may be dwarfed by a much larger development planned on the western side of East End, but Annette Scippio, the council member for the area, said both projects are important for bringing the East End plan to reality.

The larger development is Metropolitan Village, planned by developers working with United Metropolitan Missionary Baptist Church and to be located on Fifth Street near the church. The project is designed to eventually have some 325 apartments, along with retail space.

Scippio said that the ground-level retail space that Ram’s Pointe is planning should make a positive contribution to the King Drive cityscape.

“We had that type of construction many years ago,” Scippio said. “It is a very urban pattern to have retail on the ground floor and housing on the upper floor. It is a great use of the land, because we need retail along MLK, and more retail and commercial in the East Ward, period. And we need the housing.”

“It is the beginning of showing people that we are positive investors in our own neighborhoods and that we can reclaim them,” she said.

Scippio noted that other developments are taking place in the neighborhood that fit in with the East End plan. S.G. Atkins Community Development Corp. has built several houses in the southern part of the neighborhood, she said, and Southgate Village, an apartment complex, has seen renovations, she added.

Aaron King, the city’s director of planning and development services, noted that in keeping with the city’s development requirements for the area, the apartment and retail building the Bakers are planning will be sited so that it is close to the street with parking in the rear, to encourage pedestrian activity.

“What is envisioned there is certainly in line with the vision for that corridor,” King said.

DANBURY — A Winston-Salem teenager, whose body was found in early November on the side of a road in southwestern Stokes County, has been identified.

Ask SAM: Why is liquor sold the way it is in North Carolina?

Q: I was wondering: Is there a movement to get rid of the ABC store system? I was shocked after moving to North Carolina a few years ago to fi…

11:10 p.m. update: Laela Kamoria Jones has been located and the Amber Alert is canceled.

About 0.5% of Atrium's work force terminated for failing to comply with COVID-19 vaccine mandate

A fire at Pilot Mountain State Park is under control, officials say. But experts predict warming temperatures tied to climate change will lead to more wildfires.

Michael and Charmon Baker are developing a 30-apartment building in the 300 block of Martin Luther King Jr. Drive The development, Ram’s Pointe, will have retail on the lower level.