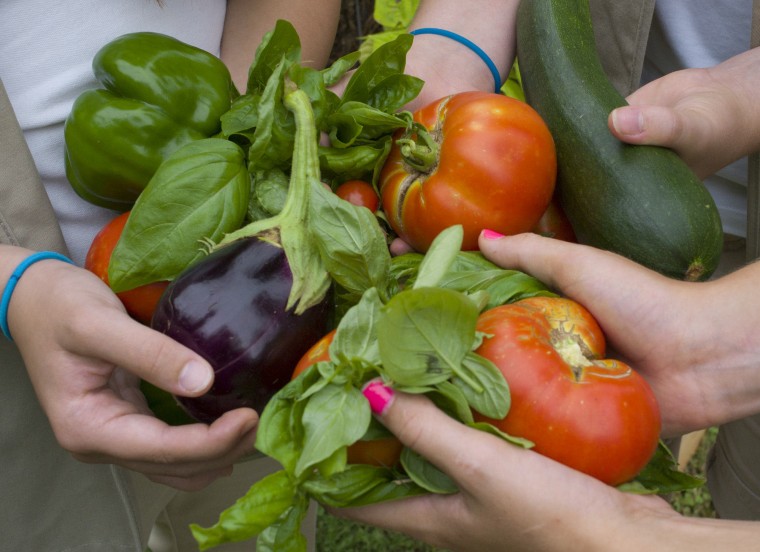 Journal photo by David Rolfe ---7/24/2012--- Girl Scouts hold a portion of the vegetables they have grown in the Clemmons Community Garden, Tues., July 24, 2012. The scouts are donating their harvest to the Pantry Project. 2 of 3 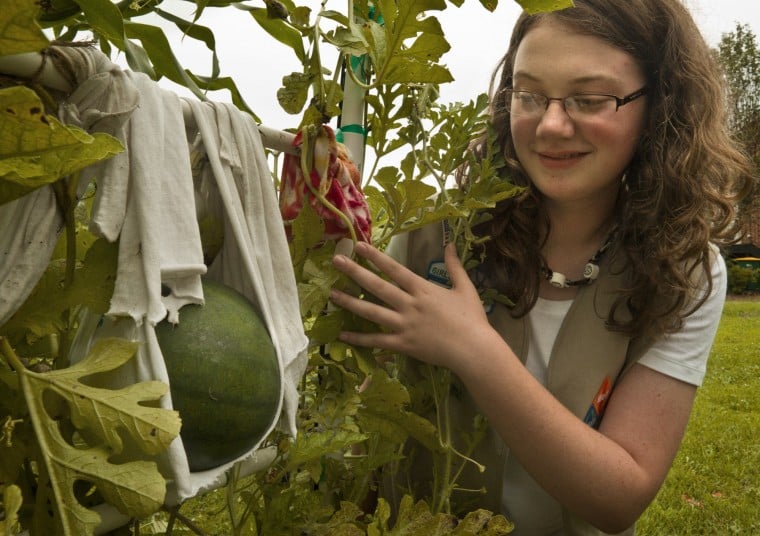 Emily Toborg, a member of a Girl Scout troop tending a community garden behind the Clemmons Town Hall, checks on a watermelon she is growing. 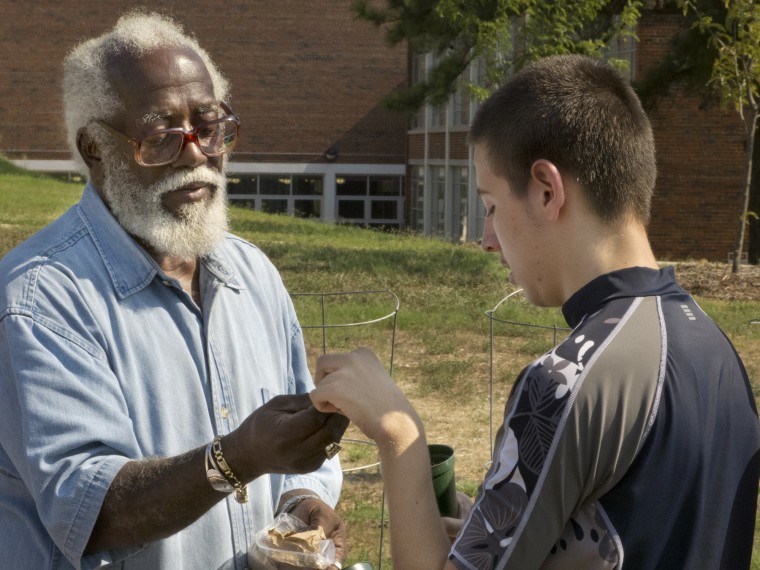 For local gardeners with zillions of zucchini, bunches of beans and too many tomatoes, the Forsyth Extension Service has a list of local food pantries across Forsyth County that will take your extras and put them to good use.

"You see the need," said Mary Jac Brennan, the Forsyth County extension agent for community gardens. Her position is funded by the Winston-Salem Foundation, which has been involved with community gardening for more than a decade.

Scott Wierman, president of the Winston-Salem Foundation, said, "Community gardens are wonderful not only because of their benefits to health and hunger, but they are also great for social capital-building."

Lines stretch out the doors of Clemmons Food Pantry, and Samaritan Ministries regularly feeds 370 to 400 people a day.

"The thinking was to get fresh produce to people faster and also to utilize pantries closer to where the community gardens were located so it would be more of a seamless effort," Brennan said. "If they're on here, we're delivering right before people come.

"This is a way people can actually do something to share something of their own."

The Pantry Project identifies pantries that will accept fresh produce, and it lists the address and times and days of operation so that delivery can be coordinated when people stop by to receive food, which reduces the need for preserving the fresh produce. Brennan estimated that a little more than 8,000 pounds of fresh produce from community gardens has been given to food pantries and individuals through this effort in the past year.

Samaritan Ministries has been starting lunch at 10:30 a.m. to accommodate increasing numbers of hungry people in 47-seat intervals. She expects August to be busy as families struggle to buy school supplies with limited incomes.

"We're feeding so many more people," she said. "In the summer we have more children. We have a very mixed group of people that eat here now," including African-American, white, Hispanic and Asian, and more women. Four to five people in wheelchairs eat there every day, as do some retired folks who are trying to stretch Social Security dollars.

"A lot of these people are people that worked that now don't have jobs," Strader said. They may be underemployed or unemployed.

Samaritan Ministries' staff adds the produce into the meals they prepare: Everything in Tuesday's salad except the lettuce was donated produce, and Wednesday's cole slaw includes cabbage that someone shared. The staff cut squash, eggplant and onion and snip the ends off beans, and if staffers have only a few ears of corn, they cut kernels off the cob and add it to mixed vegetables along with trimmed, overly ripe tomatoes.

Clemmons Food Pantry provides food to an average of 50 to 60 families of four whenever it opens its doors, said Art Duncan, manager of client services.

Elizabeth O'Meara, a master gardener and Clemmons Community Garden mentor, explained that many people are facing food insecurity. They are "people who aren't starving but are having trouble feeding their families and don't know if there's going to be enough," she said.

To identify how many residents may be facing food insecurity, Forsyth Futures looked at data about who is accessing government programs, said executive director Doris Paez.

Since 2008, the average number of people receiving food and nutrition services each month has increased by 65 percent; on average about half of Winston-Salem/Forsyth County School students apply for free or reduced-price lunches, and an estimated 75 percent of students who applied participated daily.

More than half of the 21 Clemmons garden plots are donation or partial donation beds. The program began this year and is a partnership with the Village of Clemmons. Girl Scouts with Cadet Troop 41669 pick, weigh and deliver their produce to the Clemmons pantry, and as of July 17, the community garden had donated more 150 pounds of cucumbers, onions, tomatoes, summer squash and zucchini, O'Meara said. "It's very direct; for us it's a two-minute drive," O'Meara said

Although Scout Sydney Schamay, 13, had heard about hunger, it's different seeing the lines at the Clemmons pantry.

"I'd never been and seen it in action where that many people had been hungry for that long," she said.

The Kennedy Campus community garden is a joint project of all three schools there: Kennedy School, Carter High School and the Career Center. Each school has contributed to its development, and teachers are looking for ways to tie it to classwork.

Carpentry students built the raised beds. Art students from all three schools will be decorating the beds and adding sculpture to the area. Auto students may be creating welded sculptures for the space. Culinary arts students hope to use the fresh herbs in their recipes.

"It's really cool to see these three schools coming together here … to feed the community," said Ann Ragan, a master gardener and in-school suspension teacher at the Career Center.

The Rev. Francis Manns, a teaching assistant at Carter who leads the 4-H program there, said the alumni and 4-H group has been tending community gardens and giving produce to various agencies for years. Produce they took to Social Services was delivered to senior citizens who didn't quite qualify for food stamps.

This summer, students from the Carter Alumni Association and 4-H club have been tending the four new raised beds full of tomatoes, peppers, squash, basil and thyme. They've given about 12 pounds of fresh produce from the new garden to nearby Colony Apartments. Carter students also have harvested produce from Ancestor Acres and have taken 89 pounds to the ARC in Kernersville.

"I like to grow tomatoes, cucumbers, squash, cabbage and corn," said Kylin John, who graduated from Carter in 2009. He's glad to give the food away because "it makes me feel good."

Manns said, "To see them and watch them as they sow the seed, it's phenomenal, the way they get it. They have no desire to make money. The days we went to Social Services to give bounty away, they would be overjoyed; they love to give."

Project.pdf to find a pantry near you.

Watch Now: Can you transmit COVID after vaccination?

Watch Now: Can you transmit COVID after vaccination?

Journal photo by David Rolfe ---7/24/2012--- Girl Scouts hold a portion of the vegetables they have grown in the Clemmons Community Garden, Tues., July 24, 2012. The scouts are donating their harvest to the Pantry Project. 2 of 3

Emily Toborg, a member of a Girl Scout troop tending a community garden behind the Clemmons Town Hall, checks on a watermelon she is growing.