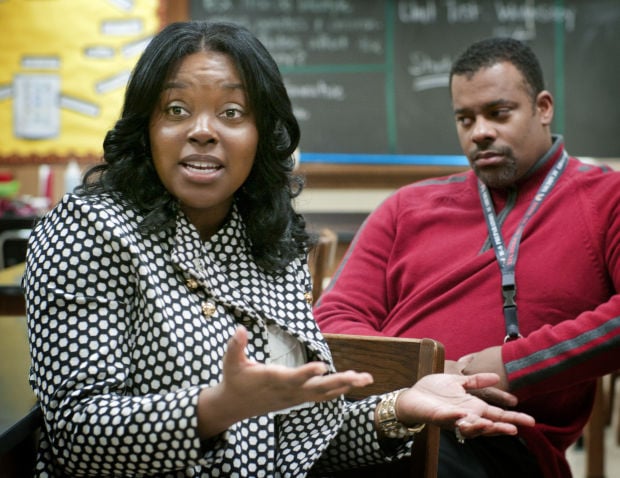 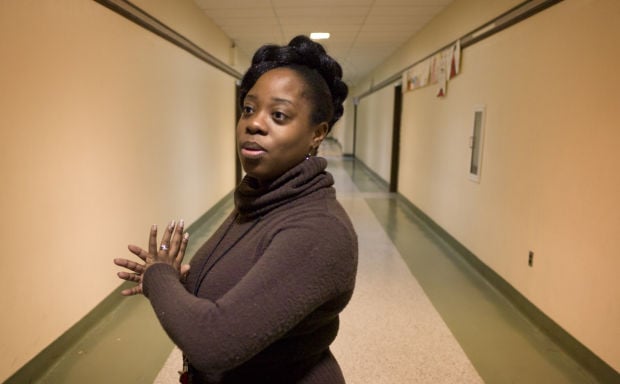 Danielle Moore, a sixth-grade language arts teacher at Winston-Salem Prepatory Academy, at the school Thursday, Dec. 5, 2013. Moore said, "When the girls are not in the classroom, I get a lot more out of my guys." 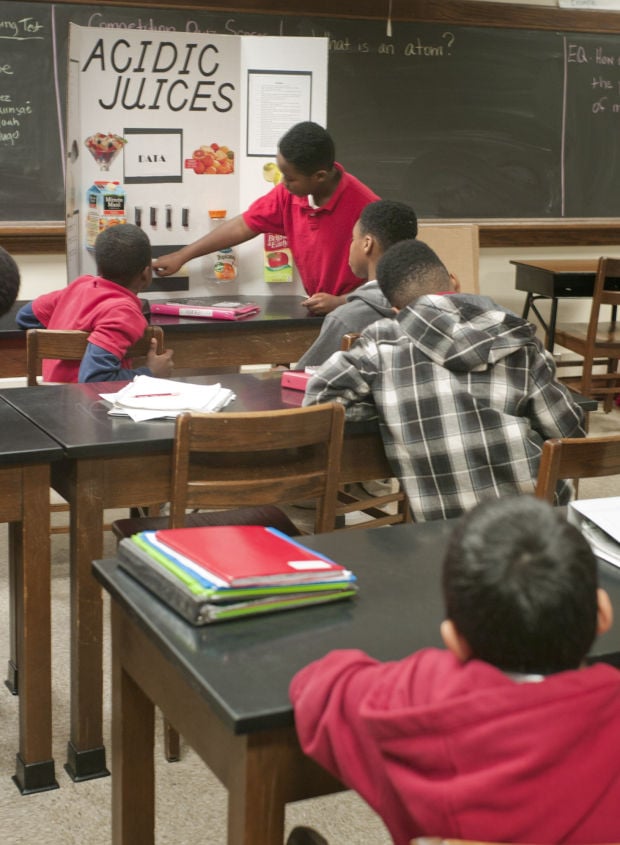 An all-male sixth-grade science class is seen at the Winston-Salem Prepatory Academy on Thursday, Dec. 5, 2013. The middle school has been experimenting with single-gender classes in the 6th, 7th, and 8th grades. 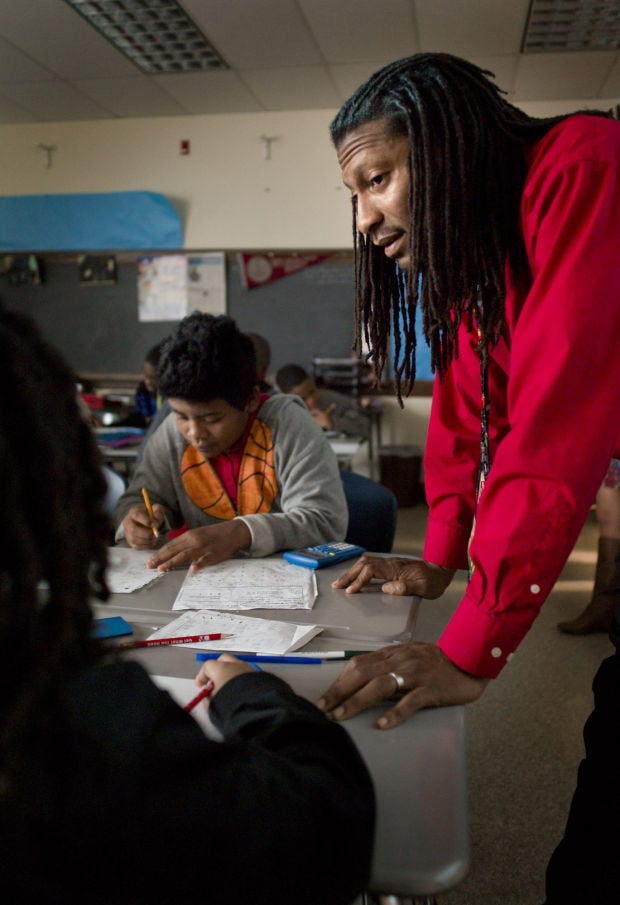 Dwayne Leach, right, helps a student in his all-male math class at Winston-Salem Prepatory Academy, Thursday, Dec. 5, 2013. Leach likes the single-gender class system, saying it encourages his students to open up in class.

A change at Winston-Salem Preparatory Academy has shaken up classroom dynamics, even pitting boys against girls in the school's lower grades.

Don't worry, though, teachers say. It's all in the spirit of healthy competition, and it's leading to better classroom performance on all fronts.

It started when the school adopted a single-gender classroom policy for its middle-school core classes. The change was approved in April and implemented this school year. When classes began in August, Winston-Salem Prep's sixth-, seventh- and eighth-graders were divided into two classes of all boys and two classes of all girls for their math, science, language arts and social studies lessons.

School administrators and teachers were looking for a way to create a classroom where students were more attentive, more engaged and more comfortable participating.

“I was looking to change the culture and environment in the school,” said Janel Sharpe, an eighth-grade science teacher. “I wanted to improve test scores and learning conditions.”

What do you think about single-gender classrooms?

Sixth-grader Lovely Ponce said she likes her all-girl classes. She gets more done, she said, because the new classroom makeup has removed a large distraction — the opposite sex.

“I won’t get distracted by the boys,” she said. “It keeps me from not doing my work.”

Distractions have been removed, but it's also created a level of healthy competition between the gendered classes that teachers weren't necessarily expecting, said Carlos Rodriguez, an eighth-grade math teacher. Now, when his boys hear that the girls’ class is ahead in a lesson, they're more apt to focus and get work done.

With single-gender classes, teachers say they're able to better connect with students.

It's no secret that boys and girls learn differently. But instead of trying to cater to both in a single lesson, like traditional classrooms, Winston-Salem Prep's middle-school teachers get to design lessons tailored to boys or girls. Danielle Moore, a sixth-grade language arts teacher, said it lets her choose different poems for the grade’s poetry unit for her boy classes versus her girl classes. During a unit looking at song lyrics, she can choose different songs. Creating two lessons to teach the same topic is extra work, but Moore said it's worth it for the difference she sees in her students.

“Especially when we’re talking about feelings,” she said. “Girls are not as shy, and guys don’t feel like they have to remain ‘cool.’”

What about socializing with the other gender? Well, students still get to do that in their elective courses. Students are in co-ed classes for such courses as music, art and gym.

But during the core classes — the subjects on which they take standardized assessments at the end of the year, with scores that will be compared to those around the state — it’s all single-gender and it’s all business.

Teachers aren’t the only ones in favor of the move. Students, too, are saying they’re happy with their single-gender classes.

“Some of the boys would play with the girls in class,” said DeAndre Boyd, a sixth-grader. “I don’t want nobody getting distracted or trying to distract me.”

Winston-Salem Prep has struggled with academic performance, falling behind district averages on end-of-grade tests. While students who took the new READY Accountability assessments — statewide exams to test the standards in the new common core curriculum — met the growth targets that measure how much they learned in a single year, the school’s middle school composite score was one of the lowest at just 20 percent.

It's too early to have hard data to look at for comparisons against previous years, but teachers and students alike seem to believe single-gender classrooms have had a positive effect.

It's one of a handful of schools in the Winston-Salem/Forsyth County Schools system to implement the practice, but the first to do so across entire grades.

Danielle Moore, a sixth-grade language arts teacher at Winston-Salem Prepatory Academy, at the school Thursday, Dec. 5, 2013. Moore said, "When the girls are not in the classroom, I get a lot more out of my guys."

An all-male sixth-grade science class is seen at the Winston-Salem Prepatory Academy on Thursday, Dec. 5, 2013. The middle school has been experimenting with single-gender classes in the 6th, 7th, and 8th grades.

Dwayne Leach, right, helps a student in his all-male math class at Winston-Salem Prepatory Academy, Thursday, Dec. 5, 2013. Leach likes the single-gender class system, saying it encourages his students to open up in class.