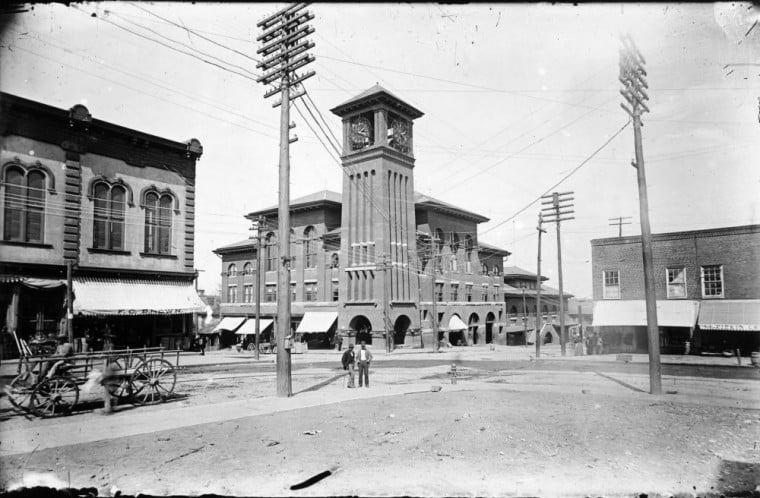 The Winston Town Hall once stood on the downtown lot where the Reynolds Building was built. 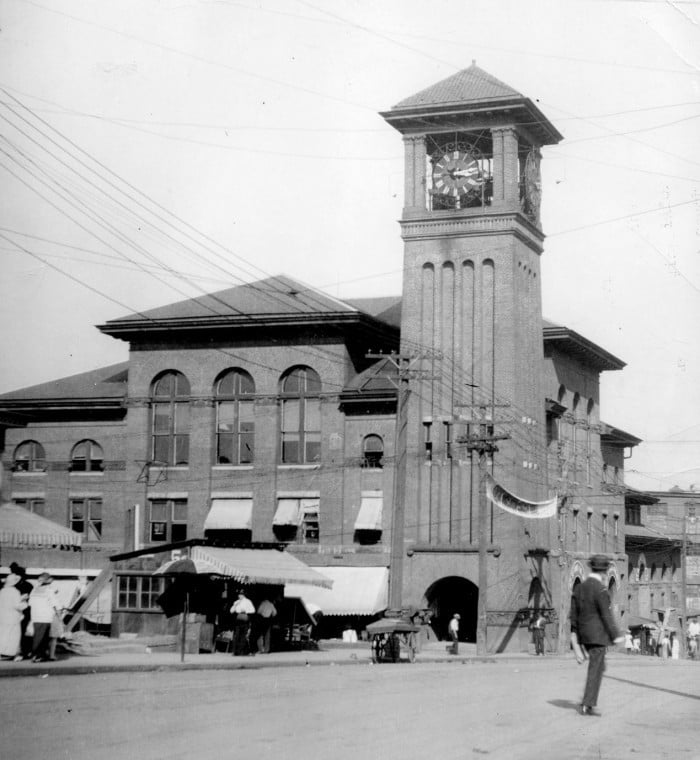 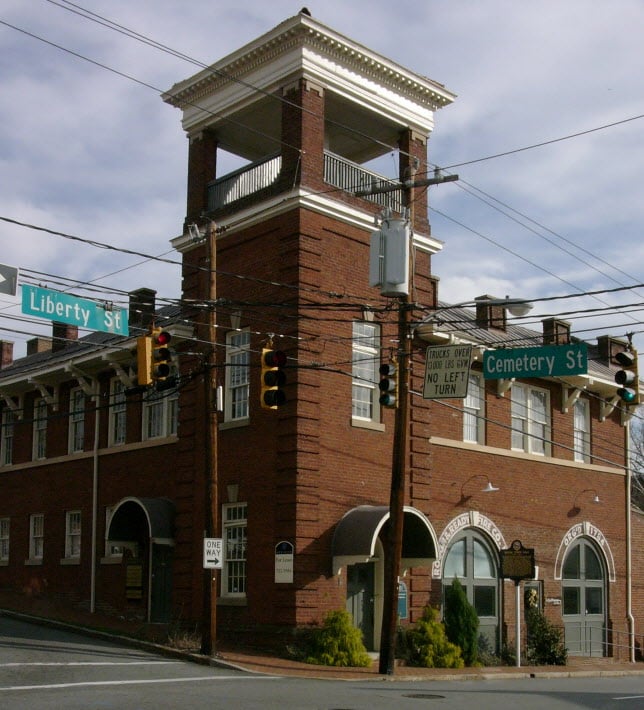 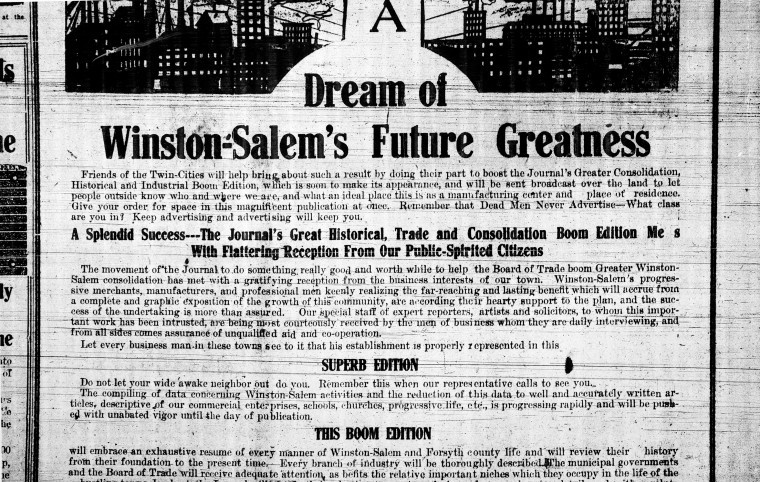 A Dream of Winston-Salem's Future Greatness 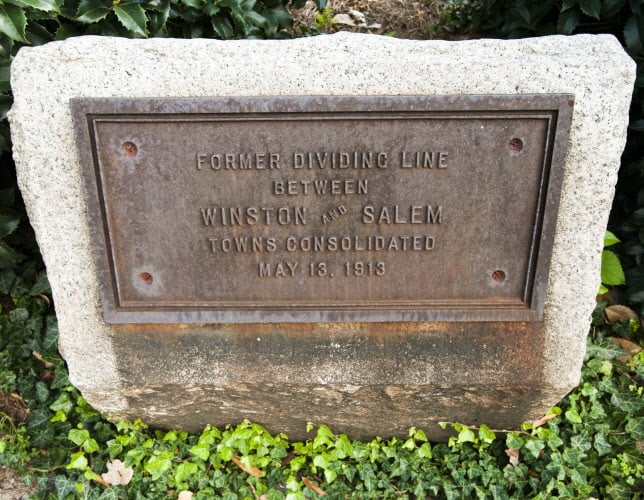 Monument marking the former dividing line between the towns of Winston and Salem.

A small punctuation mark is still a big deal after all these years.

As Winston-Salem residents celebrate the arrival of a new year and all the potential it holds for them, they will also get a chance in 2013 to look back, to celebrate the 100th anniversary of that little hyphen that joined the chartered municipalities of Winston and Salem into one burgeoning metropolis in 1913.

Later today you might revel in 21st century technology in our city – check your text messages, take in a movie in 3D, watch a football game on TV that’s taking place hundreds of miles away, or heat up your lucky collard greens and black-eyed peas in the microwave.

But for now, take a spin through the history of the city leading up to that important union 100 years ago.

It was the culmination of a 34-year effort as one town struggled to remain relevant and the other sought to flex its muscle.

The evolution of consolidation

Salem had been founded in 1766 by Moravians and was incorporated in 1854. In 1849, Forsyth County was formed, and Salem sold it land for a county seat.

In 1851, the new town was named Winston in honor of Joseph Winston, a Revolutionary War hero. Winston and Salem were separated only by what is now First Street downtown.

Winston’s economy soon surpassed Salem’s. In 1872, work began to connect Winston to the North Carolina Railroad and by the 1880s, about 40 tobacco factories were operating in Winston. Along with industry came a population boom.

Leaders in both towns saw the need for consolidation, and in 1879 the first attempt was made.

In February of that year, the Winston Board of Commissioners asked Salem to appoint a committee to meet and discuss consolidation. The committee recommended that the towns seek a charter from the North Carolina General Assembly for a consolidated town, and the General Assembly approved charter legislation March 13.

Winston was almost twice as big as Salem, but Salem was still more influential. A vote for consolidation would have created the “City of Salem,” and the Winston name would have been dropped.

The Union Republican newspaper of Winston pushed for the merger.

“Were we consolidated under one charter we would be a city the fifth in population, third in wealth, and the second in business and enterprise to no other place in the State,” the newspaper wrote on Feb. 27, 1879.

The People’s Press of Salem and the Western Sentinel of Winston opposed it.

“We can see no real benefits for Salem in the proposed union at present. We may be shortsighted, but judging from past experience, we cannot endorse the movement,” The People’s Press wrote Feb. 20, 1879.

What’s in a name?

But the consolidation issue didn’t drop, nor did the problem with the name.

In the Aug. 13, 1885, edition of the Western Sentinel was the following suggestion: “What do Winston and Salem people say to a consolidation under the name of Forsyth City?”

In January 1893, Robert B. Glenn, a Winston-Salem lawyer who later became North Carolina governor, broached consolidation again. But it was dropped quickly. According to a story in the Jan. 1, 1913, edition of the Winston-Salem Journal, the name was to blame.

Salem would have been dropped, which “was widely favored in Winston, but was opposed in Salem because of the proposed sacrifice of the name around which had clustered so much of dearest memories.”

In 1899, federal officials merged the post offices of the towns with the official postmark designation of “Winston-Salem.” In addition, railroads began to refer to the community as Winston-Salem in their schedules, and manufacturers and business leaders announced themselves as from Winston-Salem.

Then in 1910, in a speech to the Board of Trade – today’s Chamber of Commerce – J.E. Alexander, an influential lawyer in Winston, urged consolidation. The population of Winston had become three times that of Salem. Winston and Salem shared streets, some fire equipment, even transportation facilities, according to a story in the May 12, 1963, edition of the Winston-Salem Journal and Sentinel.

In December 1912, a special committee on “Consolidation and Extension of Corporate Limits” – under the leadership of Alexander – was appointed to study all areas of the towns’ operations. It recommended that consolidation be pursued.

On Dec. 12, J.L. Ludlow, the president of the Board of Trade, spoke to more than 200 businessmen and civic leaders in support of that recommendation in what became known as the “walled city” speech.

“In ancient days it was the custom of cities and estates to surround themselves with great walls to keep out intruders and to otherwise facilitate defensive measures,” Ludlow said, according to newspaper accounts.

“Under modern civilization, this fashion has disappeared, and, instead of walls to keep people out, cities now provide broad avenues … to bring people in. …

“We (Winston and Salem) have grown up and into each other. Our interests have become identical. Our aims and purposes are the same. But whatever the … reason, a great fence seems to have been erected between the two communities. …

“The purpose of this special meeting of the Board of Trade is to determine whether or not this organization shall begin the movement to tear down the fence and henceforth have one great community. …”

The recommendation was approved and a petition with more than 1,700 signatures was sent to the General Assembly requesting charter legislation. Most of the signers were Winston residents.

A bill was introduced on Jan. 18 and approved Jan. 27, with a vote on consolidation set for March 18.

A new mayor and aldermen were to be elected, and a timetable of five months was set up. This time, the combined community would be called Winston-Salem, with three wards in Winston and a fourth ward in Salem. By then, three-fourths of the population was in Winston, according to the Journal.

The push from both sides began.

Unsigned fliers were circulated, as were baseless rumors, according to a May 12, 1963, Journal story: Winston would burden Salem with taxes; Salem residents wondered whether hog-raising would be permitted in the new city (Winston said no); Moravians said the merger would be the forerunner of making a “liquor town” out of Salem. The campaign became so heated that one of the rumors had the new city planning to dig up Salem Cemetery after consolidation.

The Journal published “12 Reasons for Consolidation” in its Jan. 25 issue. They included increased growth and prosperity, lower tax rates from increased property value and the inefficiency of two governmental units, ending with: “Because there appears to be no good and substantial reason why Winston and Salem should not be consolidated into one city in fact as it has already begun in name.”

Winston voted 800-260 for consolidation; Salem, 385-224. The headline in the March 19 Journal boasted, “Sweeping Victory for Consolidation.”

An editorial declared, “There will never again be any Winston or any Salem, but the one united town – in spirit and in form – of Winston-Salem. It marks a new era in the progress of this great city. Ten years hence, we will all look back and wonder why we had not consolidated the two cities years ago.”

In the new town’s first municipal election May 6, Oscar B. Eaton, a former mayor of Winston, was elected Winston-Salem’s first mayor.

A plaque at First and Main streets marks the former dividing line, but erroneously lists the date of consolidation as May 13, 1913. The charter legislation provided that if approved, consolidation would take place on the first Monday in May 1913, which was May 9. May 13 was the day after the first meeting of the new Board of Alderman.

On May 8, 1975, the aldermen approved a resolution listing the official date of consolidation as May 9, 1913, rectifying the error.

Few people thought about the lowly hyphen until 2008, when the Winston-Salem minor-league baseball team announced it was changing its name to the Dash, an homage to that punctuation mark.

The Winston Town Hall once stood on the downtown lot where the Reynolds Building was built.

A Dream of Winston-Salem's Future Greatness

Monument marking the former dividing line between the towns of Winston and Salem.