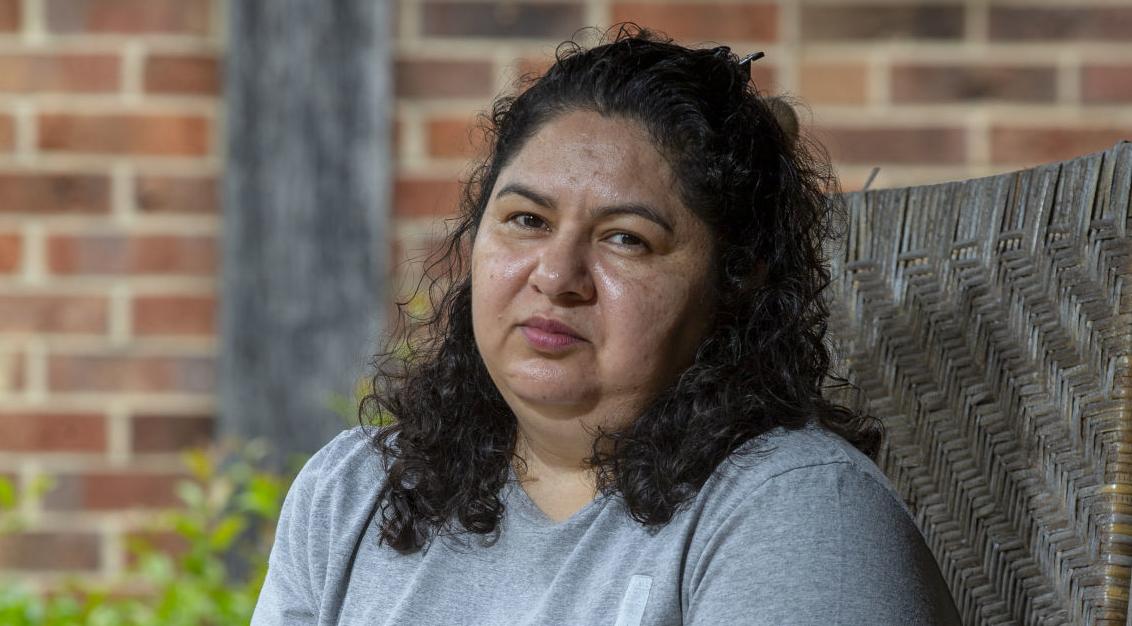 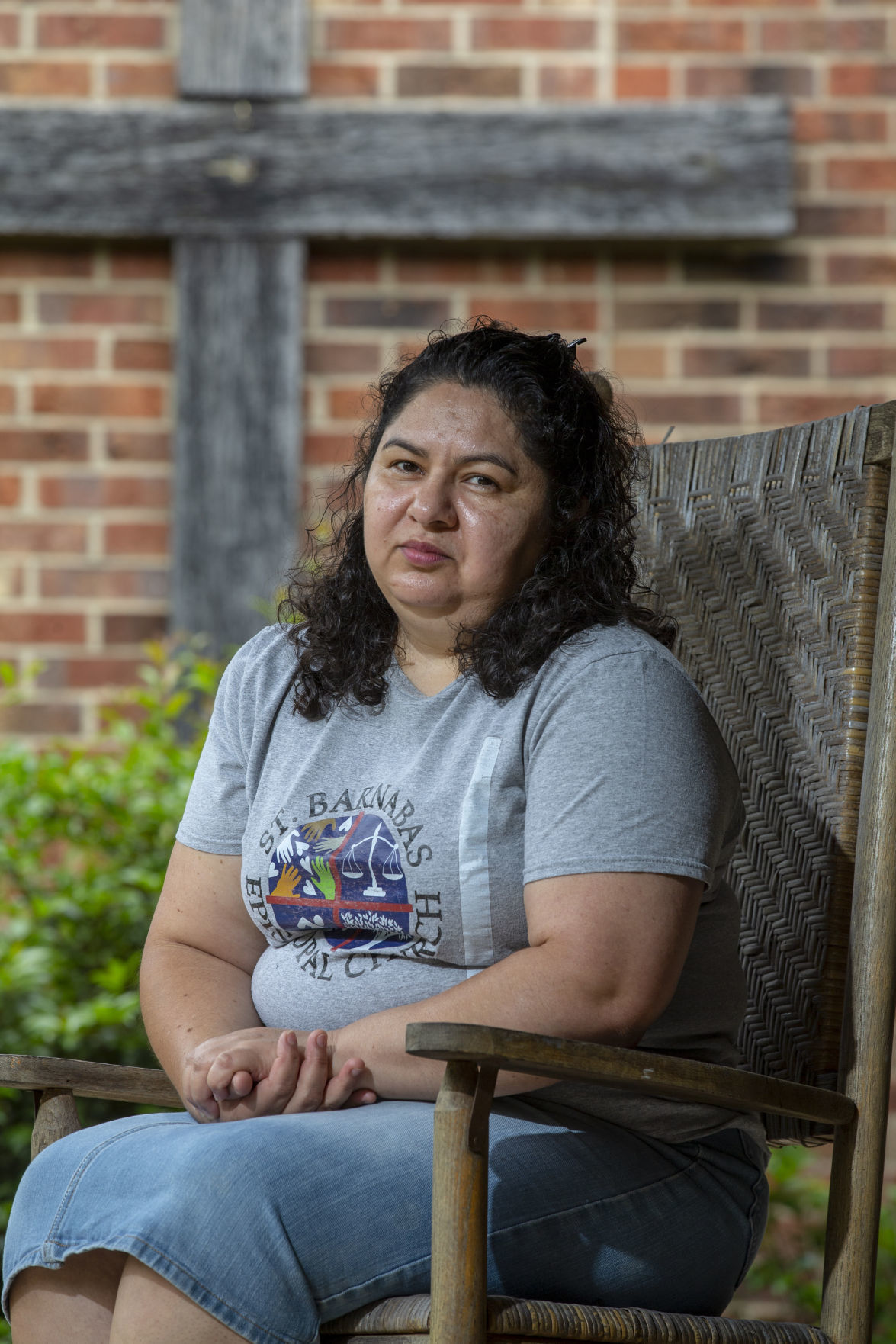 Juana Luz Tobar Ortega has lived at St. Barnabas Episcopal Church in Greensboro ever since she was ordered deported two years ago. 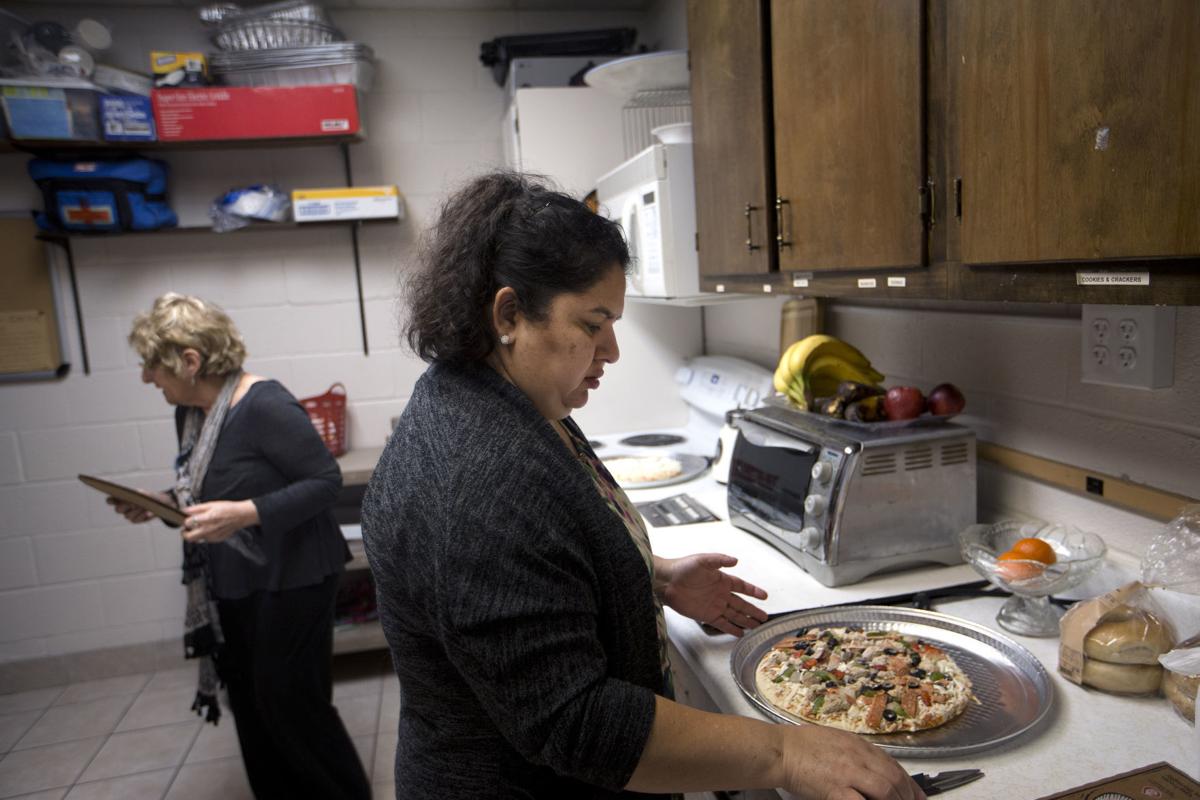 In this 2018 photo, Christine Merrimen (left) and Juana Luz Tobar Ortega cook pizza together at St. Barnabas Episcopal Church, where Tobar Ortega has taken sanctuary to avoid being separated from her family. 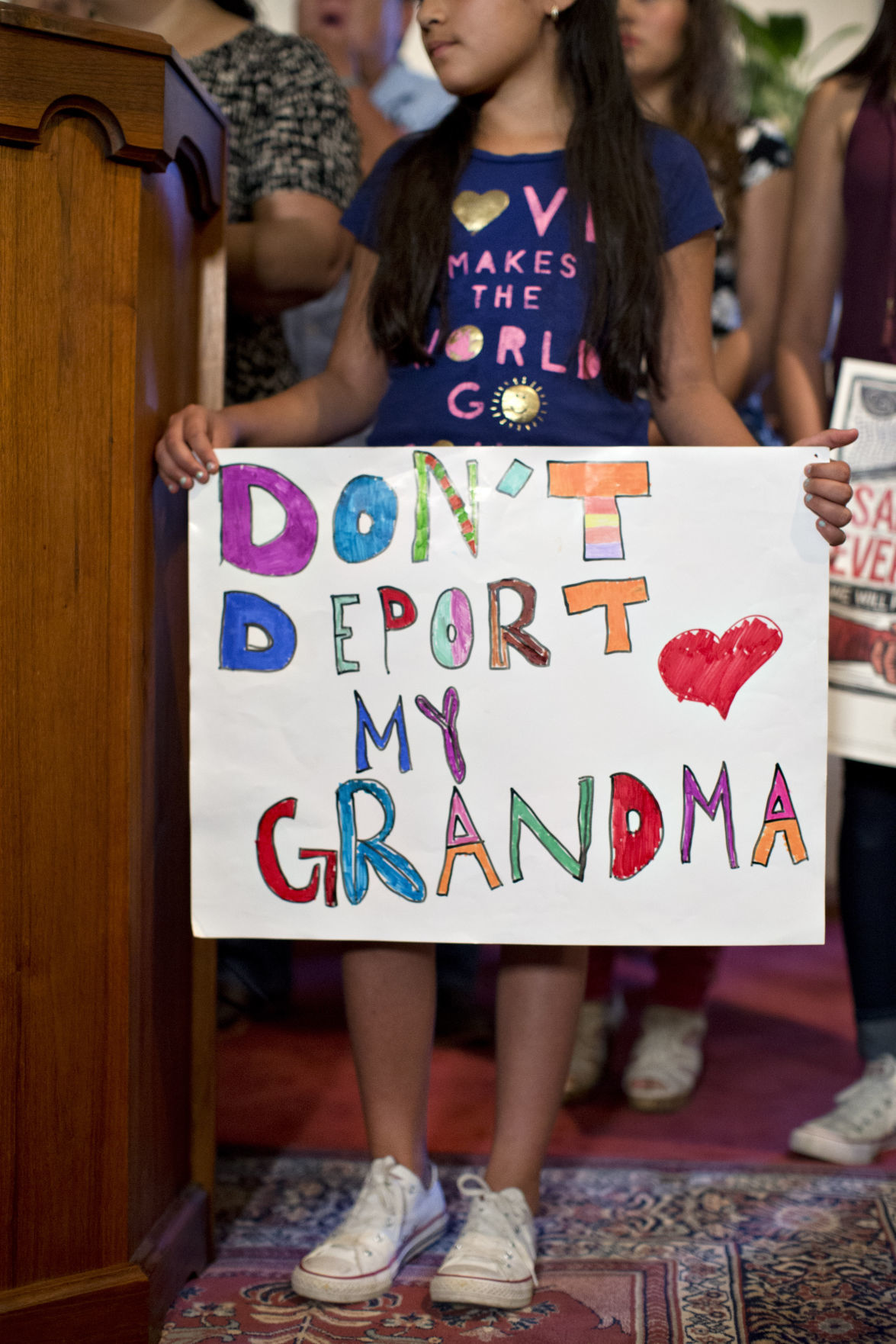 Ortega’s granddaughter Lexly holds a sign in support of her grandmother in 2017.

GREENSBORO — Some days she slips outside, finds a rocking chair and spends the morning watching birds at play and bees buzzing from flower to flower — while on the lookout for strange vehicles.

Juana Luz Tobar Ortega, who has been in the country illegally for more than two decades, escaped to the sanctuary of St. Barnabas Episcopal Church to prevent the U.S. government from deporting her two years ago. She was the first undocumented immigrant in North Carolina to seek sanctuary at a church and doesn’t know when, or if, she’ll be able to leave this place for the freedom that exists for everyone else outside these walls.

There are smiles when the grandchildren visit. When she picks up a new word in English while working with volunteers. When she gets a donation.

She is grateful for the church community which has sustained her the last two years. They took her in, made the building available to her family and provided her with a bed. And they watch out for her.

Tobar Ortega hopes for a day when that won’t be necessary.

That’s because she will be home.

‘I had no choice’

Most of the family gathered a few weeks ago with flowers and cameras for daughter Jackeline’s graduation at Davidson County Community College.

“I don’t go,” said Tobar Ortega with a sadness in her eyes.

Such has been the life of Tobar Ortega. The church is a refuge from deportation, but it may as well be a prison without bars.

“Every day I’m hoping that I arrive here and they say, ‘It’s over. Go home,’ ” said Randy Neustel, a St. Barnabas church member who volunteers to be there in case she needs anything or to run interference with anyone who knocks at the door. “We saw a need and we wanted to help. We had no idea it would last this long. I’m not complaining. I just know she wants to go home.”

Tobar Ortega is the face of a movement that has rallied supporters against what they see as unfair immigration policies that separate families and return people to situations many had fled out of fear for their lives.

The mother of four from Asheboro had steady employment as a seamstress, was an active member of her Pentecostal church and doesn’t have a criminal record.

“She’s asking for the opportunity to fix her immigration status,” said Lori F. Khamala of the American Friends Service Committee, an organization that advocates for immigrant rights. “She isn’t a threat to anyone.”

It was May 31, 2017, when the then-45-year-old mother of four stood in the sanctuary of the church, surrounded by family and supporters, and announced before a throng of reporters and cameras that she had taken residence there to avoid being sent back to her native Guatemala.

In previous cases elsewhere, presidential administrations have long held a policy of not entering places of worship or schools. But there have been several high-profile cases of U.S. Immigration and Customs Enforcement agents waiting outside of schools.

The congregation, hearing of Tobar Ortega’s plight, offered her shelter.

“We don’t regret it one bit,” said the Rev. Randall Keeney, the vicar at St. Barnabas, who hoped her situation would get the attention of politicians who might do something. “I thought within a few weeks people would meet her, get to know her and do the right thing. We are still fighting for her.”

Tobar Ortega now lives in a makeshift apartment inside the brick church with “Respect every person” signs now dotting the driveway.

That she so publicly defied the deportation order came with repercussions for her family.

A granddaughter who held up a “Don’t Deport my Grandmother” sign during that news conference faced bullying at her elementary school, where children taunted that ICE was going to take Tobar Ortega away.

“I had no choice,” she said through an interpreter about taking refuge.

Married to an American citizen, she has lived in the Triad since 1993 and had worked at the same High Point textile company since 2009. Two of her four children were born here, making them American citizens as well. The other two are here legally.

Tobar Ortega said she fled Guatemala under the fear of violence. A judge turned down her request for asylum in 1989 as did an appeals court.

For years, the government, knowing she was here, did nothing. She was among millions of immigrants living in the country illegally whose deportations were not enforced under past presidential administrations. Previous policies under presidents of both political parties were to go after immigrants who were considered violent, not those like Tobar Ortega who had clean records.

In 2001, Tobar Ortega was granted “voluntary departure,” which required her to leave the country but would have allowed her to return for visits or formally apply for citizenship.

Only she never left.

Tobar Ortega had checked in with immigration officials once a year starting in 2011 after ICE agents showed up at her job. But on April 20, 2017, at the ICE office in Charlotte, she was ordered to leave the country by May 31 that year.

Their mandate harkened back to a 1999 incident.

While Tobar Ortega was trying to gain asylum in the U.S., she abruptly returned to Guatemala to visit her daughter, who had a life-threatening illness. She was detained while trying to re-enter the country with what turned out to be a false visa.

She called it a difficult decision under impossible circumstances, and has spent thousands of dollars over the past 20-some years trying to get on a path to citizenship.

ICE officials say they are simply following the law, even if their actions follow tougher rhetoric by President Donald Trump’s administration.

Since Tobar Ortega moved into St. Barnabas, others across the country have followed her example. Success stories are few. Many have been deported. Each has had a court date with an immigration judge first.

“If you’re ordered removed from the United States, this agency is going to carry that out,” said ICE spokesman Bryan D. Cox, who declined to comment on specific cases. “It should come as no surprise to any of those individuals.”

Tobar Ortega’s supporters have rallied outside the High Point office of U.S. Sen. Thom Tillis, who is a member of the U.S. Senate Judiciary Committee, which oversees immigration matters.

Through his office, Tillis has said there is nothing he can do.

“Our office previously made an inquiry to ICE on Ms. Ortega’s behalf. However, this matter is now out of our jurisdiction,” Tillis said through a statement.

For months, Tobar Ortega wouldn’t go outside. She would look at her grandchildren playing on a swing set from her bedroom window.

Often, she slips from her room to the church sanctuary, where she crouches on her knees, using a pillow that someone left for her.

‘Our families need us’

After picking up her degree, Jackeline and the rest of the family went straight to the church.

Tobar Ortega said she will continue to think about good moments like that one. She wants her situation to force lawmakers to take action for her and others sharing her plight.

“Santuario,” a film about undocumented immigrants that centers on her life, premiered at the Hamptons International Film Festival in October 2018. The film won best documentary short at the New Orleans Film Festival and became eligible to be nominated for an Academy Award.

“Santuario” was screened at the church for Tobar Ortega and her supporters.

On screen, she is both happy and sad.

“Our families need us,” Tobar Ortega said in the documentary.

But there was no happy ending when the credits rolled. Just Tobar Ortega, still separated from her old life.

Juana Luz Tobar Ortega has lived at St. Barnabas Episcopal Church in Greensboro ever since she was ordered deported two years ago.

In this 2018 photo, Christine Merrimen (left) and Juana Luz Tobar Ortega cook pizza together at St. Barnabas Episcopal Church, where Tobar Ortega has taken sanctuary to avoid being separated from her family.

Ortega’s granddaughter Lexly holds a sign in support of her grandmother in 2017.