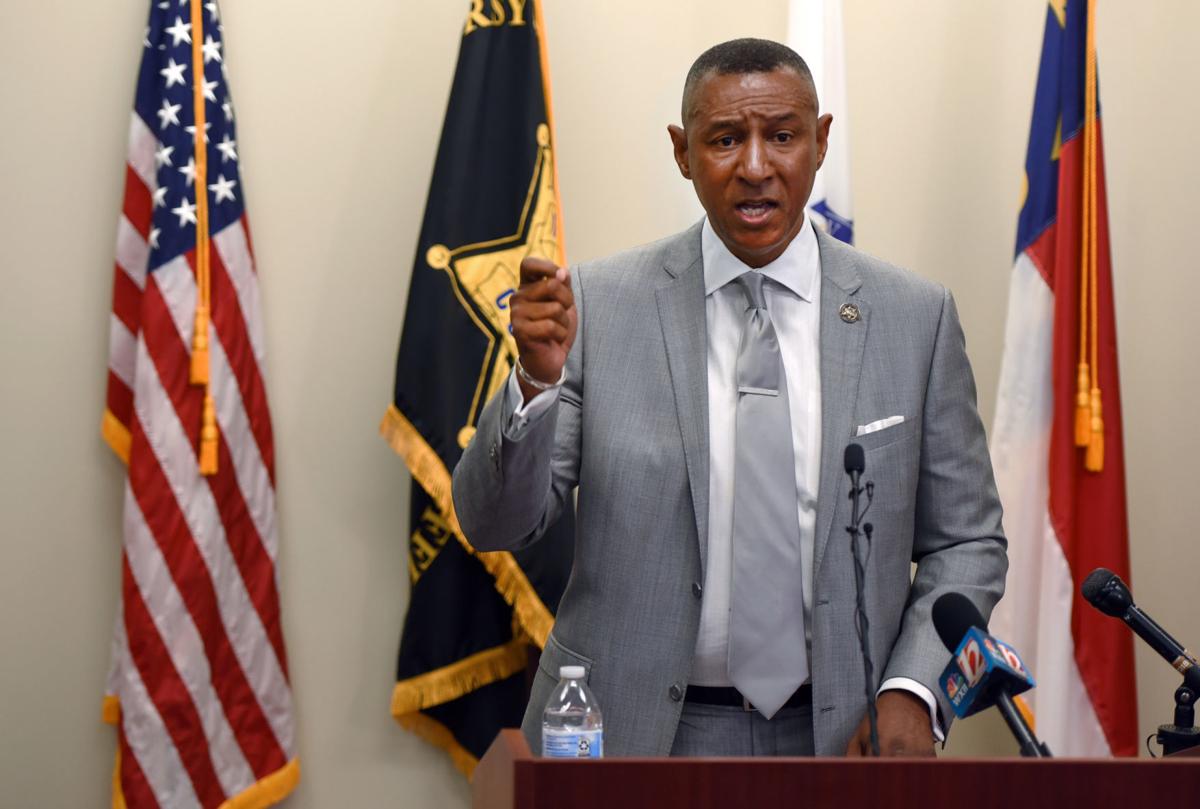 Sheriff Bobby Kimbrough gives his response Monday to allegations that one of his deputies used excessive force during an arrest of a man at Cooks Flea Market on Saturday. Several leaders from the Black community said they agreed with Kimbrough’s assessment. 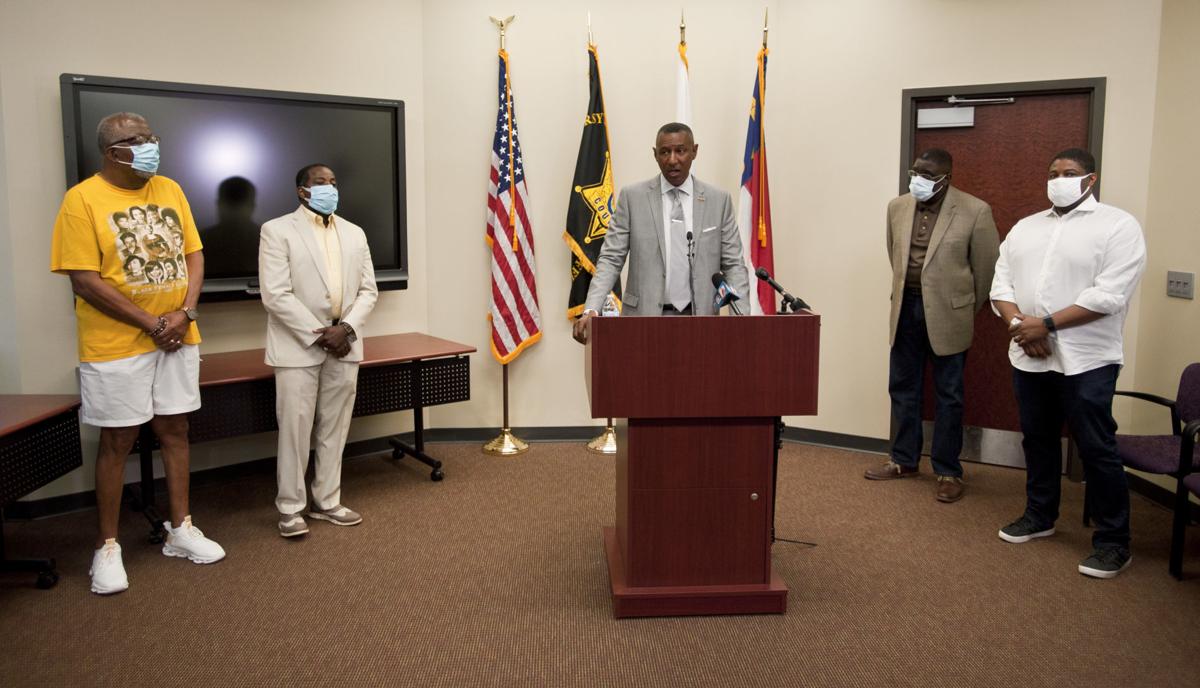 Sheriff Bobby Kimbrough gives his response Monday to allegations that one of his deputies used excessive force during an arrest of a man at Cooks Flea Market on Saturday. Several leaders from the Black community said they agreed with Kimbrough’s assessment.

The attorney for a Winston-Salem man whose arrest on Saturday at Cooks Flea Market has sparked allegations of racial profiling said the deputy used excessive force and that this incident is another example of a Black man being subjected to violence from law enforcement.

In the statement, Quander said that Moody was "aggressively followed and physically manhandled by an off-duty Forsyth County Sheriff's Deputy hired by Cook's Flea Market." Moody is black and the deputy, Troy Curry, is white.

"After aggressively approaching Charles regarding a request to wear a mask, the deputy placed him in a physical restraint, placing his left hand on the back of Charles' neck, pushing the base of his neck forward, while holding the lower part of his body with his right arm," Quander said in the news release. "It is our belief that this hold is not authorized or trained by the Forsyth County Sheriff's Department and therefore constitutes excessive force."

Quander said he will hold a news conference about the incident at 1 p.m. Wednesday in front of the Forsyth County Sheriff's Office on Church Street. He also said he will conduct an independent investigation that involves viewing Curry's body-camera footage and any other video, including from Cooks Flea Market.

Quander said that Moody was taken to the Forsyth County Magistrate's Office and later released on a written promise to appear in court. After he was released, Moody went to Forsyth Medical Center for treatment for injuries he said he got from his encounter with Curry.

"Prior to being physically assaulted by the deputy and the civilian who assisted the deputy, Charles was respectful in his mannerisms and communication to all people he encountered during his short time in Cook's Flea Market," Quander said in the statement.

In a Monday news conference, Forsyth County Sheriff Bobby Kimbrough Jr. said Curry did not use excessive force. Four Black leaders said during the news conference that they saw Curry's body camera footage of the incident and agreed with Kimbrough that the incident did not constitute excessive force. Those leaders were the Rev. Alvin Carlisle, president of the Winston-Salem chapter of the NAACP; James Perry, the president of the Winston-Salem Urban League; Bishop Todd Fulton, the social-justice chairman of the Ministers Conference of Winston-Salem and Vicinity; and Al Jabbar, a community activist and Winston-Salem native.

Kimbrough said he was irritated that a video that lasts 1 minute and 18 seconds only captures part of the incident and has unnecessarily inflamed people during a time of social unrest.

"We need to know the truth because the truth is portable," Kimbrough said. "If my guys are wrong, I will be the first one to check them because before I was the sheriff or before I was an agent, I was a Black man. I understand the sensitivity of being colored, Black (and) African American. But what I am not going to get into is that we are not going to manipulate a situation in the culture and climate that we are in."

During the news conference, Kimbrough read a report that outlined what the deputy and the flea market said happened.

Kimbrough said that an employee at the flea market approached Moody, who was trying to get money out of an ATM, that face masks are required and offered Moody a free one. Moody refused to wear one.

The mask requirement was explained to Moody several times, but Moody repeatedly refused to wear it, according to Kimbrough.

"The only thing he was concerned about was that he couldn't get money out of the ATM," Kimbrough said.

Moody then began walking out of the building, followed by Curry and another employee. Kimbrough and the four leaders said body-camera footage showed that Curry asked Moody to leave the premises five times and told Moody he was trespassing.

Moody told the Winston-Salem Journal on Sunday that he went to Cooks Flea Market to buy three used tires from a vendor outside and that he went inside to get money from the ATM machine so he could pay for the tires. He said two different employees, one black and one white, told him about the mask requirement and said that there were masks for sale. Moody said he told the employees that he would pay for the masks as soon as he got money out of the ATM.

Moody said he then went to find another ATM and that's when he said Curry accosted him.

He said this is a difficult time for Moody and his family and friends.

"Cook's Flea Market was the site of another Black man being subjected to the violent propensities of law enforcement," he said in his statement. "Far too often unnecessary police contact results in the serious injury and deaths of Black men. We can only be grateful that Charles did not meet that same fate."

The so called hold was only used to gain control of subject. How long was it used? Two seconds, three seconds, four seconds? What happened to cooperation. It appears the situation was escalated by the subject. I guess the courts will decide.

Sorry Attorney Quander, but I am one of those who have viewed the video footage in its entirety, and NO excessive force was used by Deputy Curry. This kind of 'crying wolf' needs to stop, because it takes away from those citizens who ACTUALLY ARE victims of excessive force by law enforcement. Your client simply thought he'd take advantage of the current situation going on in today's society and thought he'd somehow 'get a pass,' but it's NOT going to work here. This case is a nothing burger here.

The gentleman resisted. He brought it on himself. Only necessary force was applied.

Your oh so injured and crurely handled & personally embarrassed client forgot or deliberately ignored the #1 rule/law on the streets. " Do not . Repeat. Do Not call Attention to yourself and No Cop in the Universe will even look in your direction.. is your client so incapable of doing that so simple thing ?