The owner of Old Winston Barber & Style Co., on the corner of Sixth and Trade streets, was told Tuesday by the building's owner that he could no longer rent there because of racist comments from his Facebook account.

Michael Berrier, the owner of the barbershop, was singled out by people in the community after the comment began to circulate on social media during a weekend of protests and heightened awareness of police brutality.

The comment was on a post about protests over the death of George Floyd, a black man who died after a white Minneapolis police officer pressed his knee into Floyd's neck. The protesters were mostly black and comparisons to monkeys, including the use of images of bananas, have long been considered a slur against African Americans.

The Facebook account of the barbershop has been taken down. Berrier did not return a phone message Tuesday.

Over the past four days, the shop has been a target of protesters, with some leaving bananas on the doorstep of the shop, which has been boarded up since Saturday morning.

On Tuesday morning, Larry Barron, a community activist and spoken-word poet, organized a protest in front of the barbershop to pressure the building's owner, Mike Coe, to evict Berrier.

As people began to gather in front of the barbershop, Barron said he learned from Coe that Berrier had been told he could not return.

Coe said he has been unable to reach Berrier for the last few days.

"He teared up," Coe said about Berrier. "He realizes he made a mistake."

Berrier had been renting the space on a monthly basis.

"I do a lot of work here in these streets, with kids and adults, and to have someone tear down all the work we do, for what? What's your purpose?" Barron said. "He thought he was going to piss a few people off and go to sleep. He didn't realize that social media is a beast. Social media is a beast."

About 60 people stood in front of the shop Tuesday, including Antwan and Terrisha Lyons.

"For you to be working in such a diverse city and feel that way? You shouldn't be here if you don't like it. To think you can hide on Facebook, that we can't read and comprehend what you are saying? It was insensitive and uncomfortable to us," she said.

Her husband said he came out to stand for equality and injustice.

"That's all we're looking for," he said.

Kudos to the building owner Mike Coe, for evicting that bigot from his premises. And if bigots like Berrier want to parade their bigotry on social media, they should own up to their bigotry and quit making pathetic excuses such as "I didn't do it." 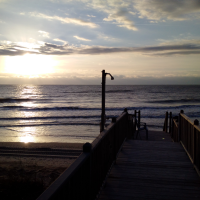 Agreed that the business owner comments and action was inappropriate, period. But your comments and 'judgment' are no better. 'It's never a good idea to throw rocks at glass houses...because inevitably someone is going to throw at yours as well..' If you want to show some real strength, some character and class, then 'turn the other cheek', else you're just throwing gas on the fire. Good luck.

My comments and 'judgment' make NO mention of "throwing rocks at glass houses." But that's a typical response from an entitled extremist such as yourself . . . making asinine assumptions without facts or substance. [beam]