Virus surge wipes out months of progress in US, Europe. Here's where new cases are the highest

Bill, 83, knew he loved Shirley, 82, when they met. Three months later, he proposed. The Greensboro couple's now honeymooning.
0 comments
Share this
{{featured_button_text}}
1 of 2 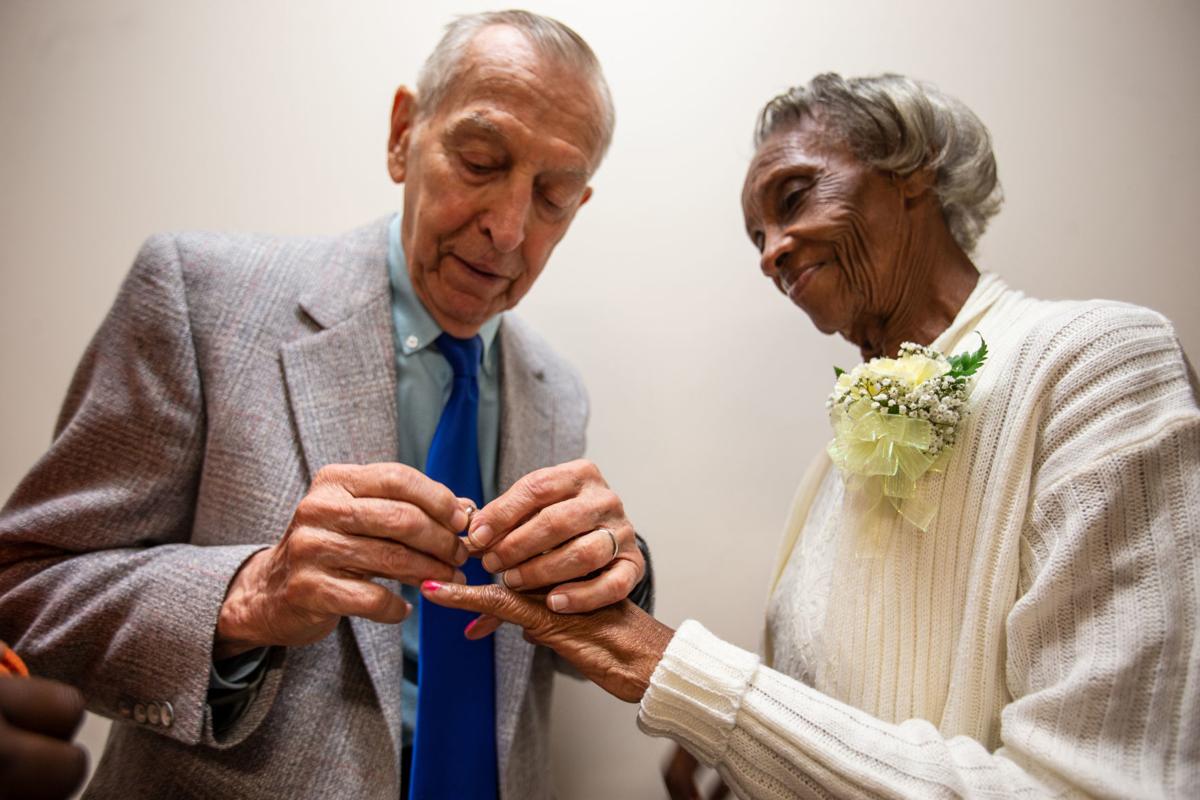 Bill Shaffstall (left) puts a ring on Shirley Archie’s finger during their wedding ceremony in Greensboro on Saturday. 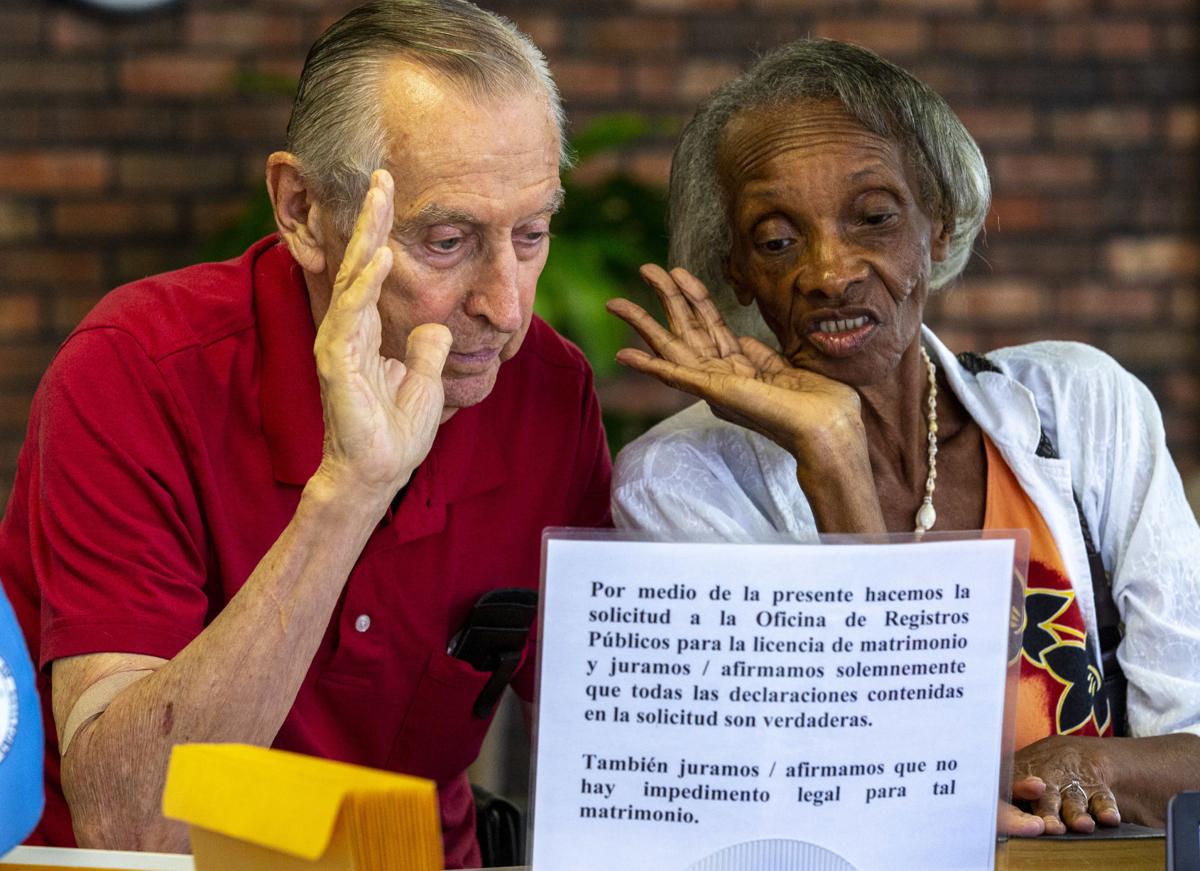 GREENSBORO — At the downtown magistrate’s office, 83-year-old Bill Shaffstall and 82-year-old Shirley Archie were the first of four couples to sign up shortly before 10 a.m. Saturday for a judge to marry them.

The two octogenarians holding hands in the waiting area of the Guilford County Detention Center complex met earlier this year and had known each other for just three months when Bill proposed.

“If she loves him, I’ve got to be happy for her,” Webb said as they waited. “But at first, I was like ‘No, you are not getting married. You are 82 years old.’ But she’s feisty and made up her own mind. I prayed about it and as we got to know him he fit right in.

The two met at the end of spring in front of the mail boxes at the entrance of their mobile home park.

She is a talker.

Her hands get ice cold.

“It gives me a chance to hold them,” he said with a grin.

They both have a special place in their hearts for the Good Book and grandchildren.

After hearing of the engagement, some people told them to take their time.

The two know that concerns about their nuptials are mostly wrapped in good intentions.

But Bill knows how he felt the first time he laid eyes on Shirley.

“And at our age, we don’t know how much time we have left,” he said with a chuckle.

Neither is originally from Greensboro. Both raised children with other spouses.

Bill, a widower and former Army guy, had moved from his native Ohio to Winston-Salem to be with his daughter and her grandchildren. A few years earlier, he had lost his high school sweetheart and wife of 54 years.

His daughter eventually moved from Winston-Salem to Greensboro and settled into a quiet mobile home park with tidy yards. She used to talk about a friendly woman who the neighborhood kids called “Grandma.”

Bill followed when the park had another opening.

Shirley, who had a mobile home there, had retired from the hospitality department at Moses Cone Hospital. She had grown up in Greenville, S.C., and moved to Richmond, Va., to be closer to her ailing mother as a young woman. It was there she met her first husband. They later followed family to Greensboro.

She became a widow in 2017 after 32 years of marriage. Her husband spent the last decade or so of his life in a nursing home after a stroke.

The day they met at the mailbox, Bill said “Hello.”

“I talk to just about everybody,” Shirley would later say, with a wink and a smile.

The kids might call her “Grandma,” but they call her “a grouch, too,” she added with a laugh, because she keeps an eye on what they do and is not afraid to chastise them as well.

Bill says he “saw right through that,” as they playfully banter back and forth.

They realized they lived a few houses and a turn down a street away from each other.

Soon, he was joining her on walks when she came past his yard.

She dropped off plates of food.

“We just got closer and closer as friends,” he said.

She told him that she was a Randy Travis fan.

Also a fan of the country music superstar, he went out and bought a bunch of concert DVDs and they spent hours watching them.

Although she had been afraid of dogs since one bit her as a child, she no longer tenses up around his lapdog Leela.

While he is allergic to cats, he doesn’t sneeze and his eyes don’t water around her Bailey.

She is a morning person, sometimes going to bed early and waking up at 2 a.m. “I’ve been known to sleep till 11 a.m.,” he said.

One day they shared a friendly hug.

“I didn’t want to hold her too long because I didn’t want her to think I was too forward and she might not want to talk to me anymore,” he said, blushing. “I knew I was in love with her.”

She looks at him and smiles.

He goes on doctor visits with her.

“If she wants to go shopping, I’ll go with her,” he said. “We just like to be together.”

He couldn’t get out of his mind that she was “the one.”

“Some people would just live together,” he said, “but that’s not right.”

One day in early September they were sitting in his living room.

She sat there, speechless for once.

He wanted to get a marriage license the next day.

“He’s scared I’ll change my mind,” she said with a laugh.

They settled on Oct. 19 so friends and family could be there.

That night, she sat in her bed wondering what she had done.

“I talked to the Lord about it,” she said. “I felt like God had sent me to him.”

They see the way some people stare at them — “That black lady and that white man,” she said, with faux indignation and a laugh.

They see each other in the way they say is pleasing to God — as the children of God.

“The rest of them don’t matter,” he says as they look at each other across the room.

Her 13-year-old granddaughter helped pick out the off-white dress from Roses, a department store.

It fits just below the knees.

He decided on a blazer and church slacks that were hanging in the closet.

“It’s her favorite,” he said of the jacket.

They picked out wedding rings at Walmart.

The white-gold ring in the display case had caught her eye.

After he paid for them, they sat in the car in the parking lot — the bag in between them.

He was wondering if she thought she had made a mistake.

“I said, ‘It’s typical when you get engaged to put on the ring,’” he recalled telling her. Then he slipped it on her finger.

On Saturday morning, the two were joined by Shirley’s daughter, Shurrane Webb, and granddaughter, Miyoshi Webb, as they stood before a judge, ready to say their vows.

They decided on marrying before the justice of the peace because the preacher they chose was busy and they had already committed to the date.

Earlier that morning, Shirley had painted her fingernails pink and put on makeup, which she doesn’t normally wear.

“I just put on a little bit,” she said as friend Delores Bennett stood nearby.

At times, the mobile home roared with their laughter.

Shirley would roll her eyes at Bennett pulling out a wedding night negligee she had picked up for her.

At his house, Bill grasped their marriage license and tucked their wedding bands in a pocket of his blazer.

He carried an overnight bag out the door.

After hours of trying in vain to book a hotel room locally for their wedding night — it’s the week of the High Point Market — they had finally found a hotel room for the night near the airport.

“Just a little honeymoon,” he said.

And in the next hour, before the judge, in a nondescript room for privacy, the two octogenarians promised to take care of each other.

There was a long pause and then laughter when the judge asked Bill if he took Shirley as his bride and he hadn’t realized it was time to speak up because he was gazing into her eyes.

Her “I do” came with tears.

“William,” the judge said to him, “you may now kiss your bride.”

Which he did to the delight of their guests.

As they left the courthouse, those they passed who realized what had taken placed yelled their congratulations.

It was on to the Waffle House for breakfast.

Later, a reception in a private room at the Golden Corral on Lawndale with their friends and family. Some brought gifts and flowers.

“I made these for you,” Bill’s 8-year-old granddaughter, Izzy Baker, said before handing the two hand-drawn portraits with a heart over Shirley’s skirt.

At times, the newlyweds held hands.

And then they were off, on their honeymoon.

Bill Shaffstall (left) puts a ring on Shirley Archie’s finger during their wedding ceremony in Greensboro on Saturday.