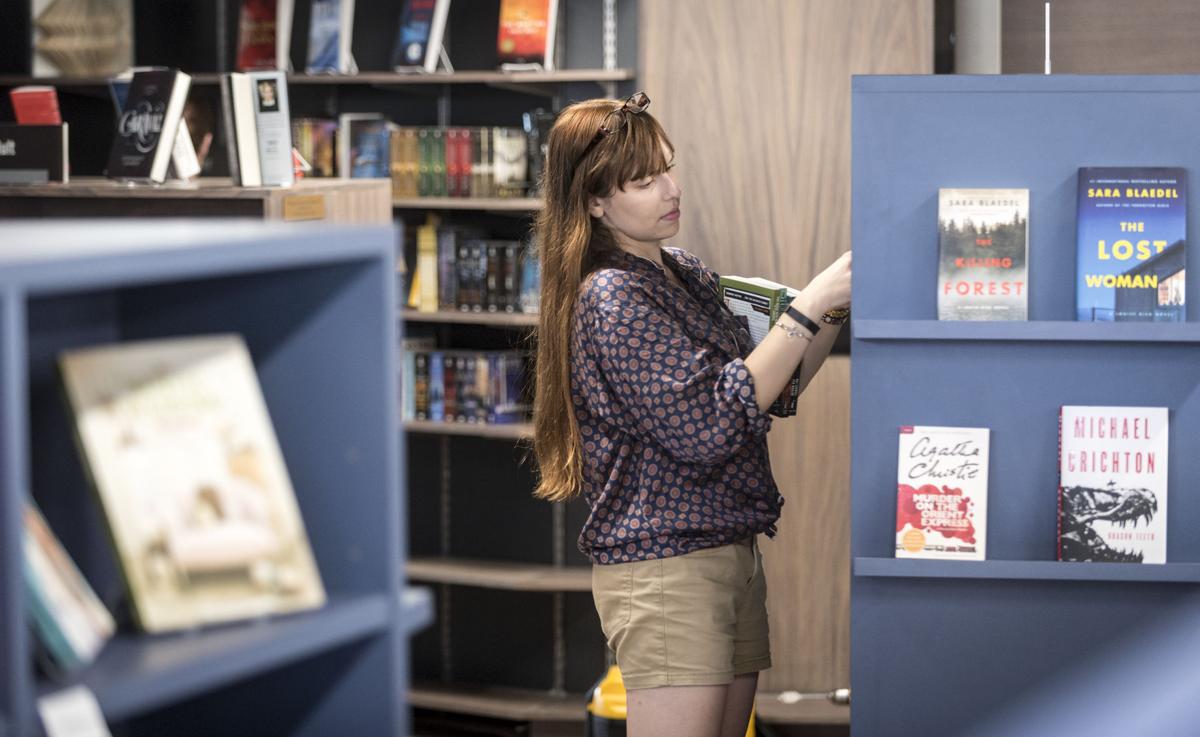 Sophie Rupp, a volunteer with Bookmarks, stocks shelves Friday in preparation for the grand opening of Bookmarks’ new bookstore in Winston-Salem. 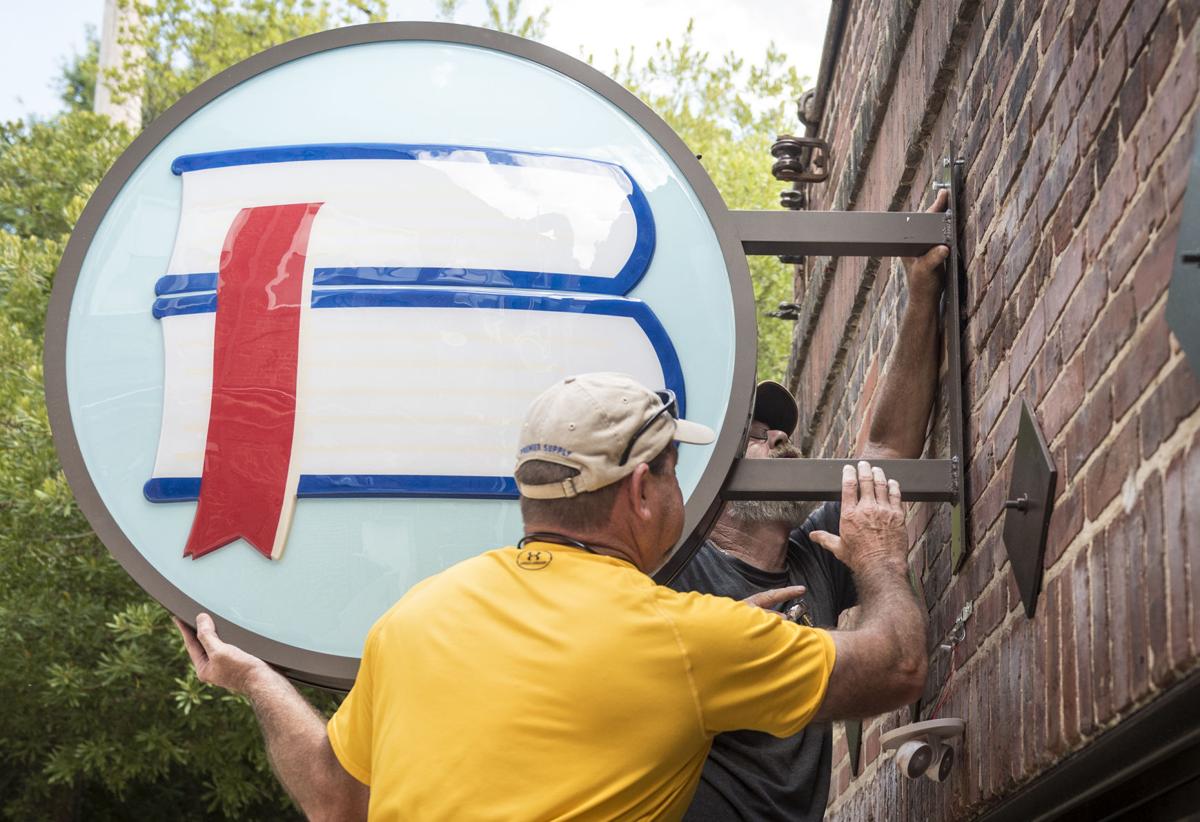 John Markle (foreground) and Jerry Luffman work to install a sign outside of Bookmarks’ downtown bookstore. 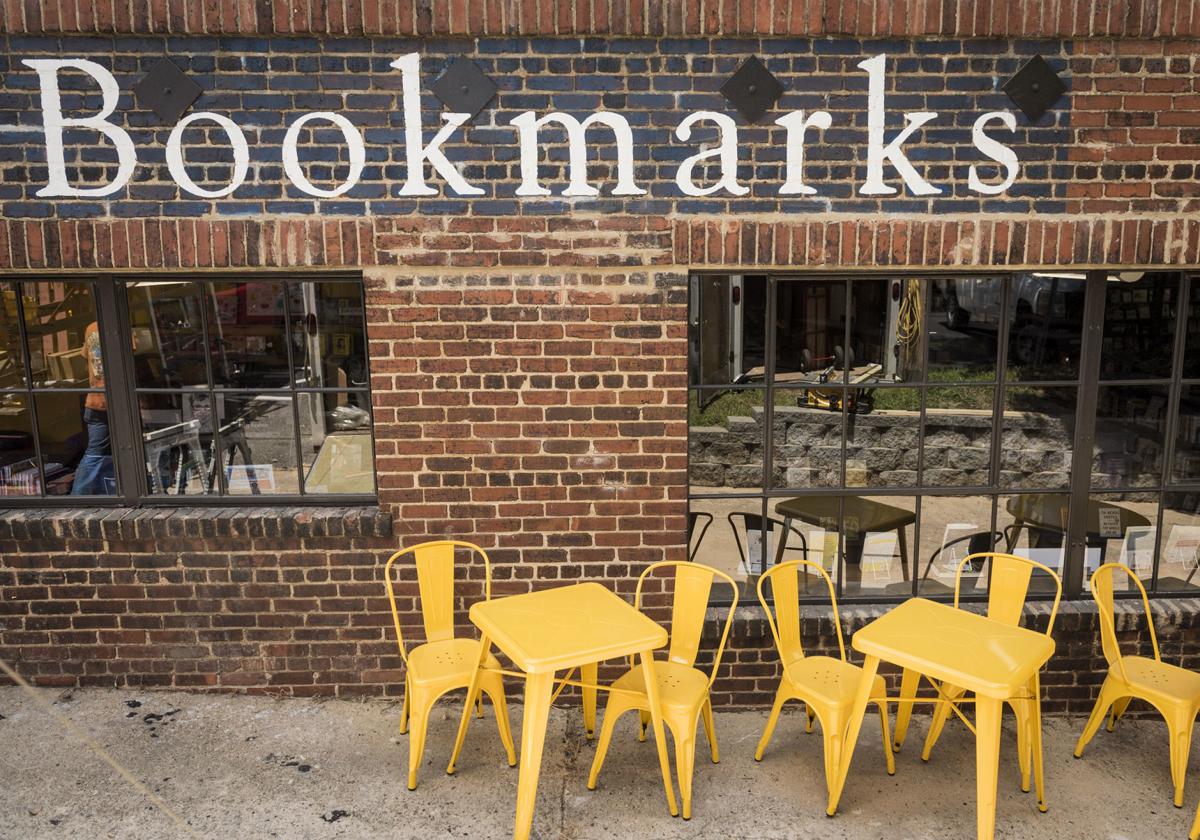 Five years ago, Bookmarks was operating with two part-time employees out of a basement in Ardmore.

Today at 10 a.m., the nonprofit literary arts organization will open the doors to a 4,600-square-foot independent bookstore and gathering place. Now, they have a board of directors, an army of volunteers and three full-time employees: Ginger Hendricks, executive director; Jamie Rogers Southern, operations director; and Beth Seufer Buss, community outreach and facilities manager.

Bookmarks is best known for its Festival of Books and Authors, the largest in the state, held annually in September. Year-round, it brings in authors to read and speak in the community, and its Authors in the Schools program reaches 7,500 public-school children.

The authors Bookmarks has presented include James Patterson, David Baldacci and John Grisham. Grisham is returning for a ticketed event Wednesday.

Bookmarks’ new home is a renovated 1930s-era building behind Domino’s Pizza on Fourth Street. It’s accessible through an alley from Fourth or from parking lots on Holly Avenue and Poplar Street. Its neighbors include the TW Garner Food Co. headquarters and test kitchen and Foothills Brewery. Foothills will open a cafe and event space contiguous to Bookmarks in October.

On Friday, the space was abuzz as employees, volunteers and contractors prepared for the opening.

White letters on a silver aluminum background opposite the front entrance spell out, “The magic of books begins here.” It’s an artwork by Gabe Bridges of Metal Morph Works.

Farther back in the store, in the children’s area, bright yellow walls display a mural by illustrator Jo de Ruiter. It shows ducks and other water fowl working in a bookstore.

Also in the children’s area are cushions on two levels of seating where kids can gather for twice-weekly story times and Karl the Kraken, a stuffed mascot. Nearby, a conference room for adults holds a table, chairs, storage areas and artwork, including a painting by Nicolas Bragg.

Architect Glenn Fulk designed the space, which will include the nonprofit independent bookstore, an event and gathering space and Bookmarks offices.

Fulk, who is from Winston-Salem, lives in New York but still spends about a third of his year here.

“I became an architect, because I love cities,” he said. “Growing up in Winston, being in the Moravian Church and seeing Old Salem, an idealized city, made me want to be an architect.

“It’s less about specific buildings and more about an environment that you can create, an architectural space where you can get comfortable. That’s what makes cities great.”

Getting comfortable is what the space is all about for Hendricks and Charlie Lovett, the chair of the board.

“Our focus as a nonprofit is to connect readers with authors and books, so from the beginning we saw this as a gathering place where people who love books could get together and talk about them,” Hendricks said.

“The sale of the book is not the most important thing,” said Lovett who is a New York Times bestselling author. “What’s important is letting children experience the joy of reading and hearing stories together.”

Having a bricks and mortar bookstore will allow Bookmarks to attract more authors throughout the year. They have a stage and podium that folds into a wall and the capacity to seat about 80 people for readings and lectures.

Lovett, who travels to promote his books, knows what authors find attractive. “When publishers send authors on the road, they send us to independent bookstores,” Lovett said.

The publisher pays the authors’ travel expenses, so all Bookmarks has to do is give them a place to read and sign books. “It means more events, and it lets us increase our authors in the schools,” he said.

Bookmarks announced its intention to build the bookstore in April 2016, and 13 months later, they have raised $650,000. That paid for design and construction on the building, books and increased staff.

“We have a sizable prudent reserve and we are opening debt-free,” Hendricks said. “Going forward, whatever we raise will go directly toward our mission.”

When they left Hendricks’ basement in 2013, Bookmarks moved into a building on Spruce Street with the Arts Council of Winston-Salem and Forsyth County, across from the Milton Rhodes Center for the Arts. In 2015, they moved into the Rhodes Center.

Besides a place to host year-round events — and they expect to double the number of events they present in the first year — having a building of their own will help them feel more secure during the festival, if the weather gets dicey. The fest is mainly an outdoor event.

They started talking about a bookstore in about 2011. “Independent book stores sell only 6-7 percent of the books in the U.S.,” Lovett said. “But they are the taste-makers.”

Sophie Rupp, a volunteer with Bookmarks, stocks shelves Friday in preparation for the grand opening of Bookmarks’ new bookstore in Winston-Salem.

John Markle (foreground) and Jerry Luffman work to install a sign outside of Bookmarks’ downtown bookstore.